As noted in Tim Hodler's recent post, Tom Gammill’s vicious fun-packed video, “The Whole-Hearted Humiliation of the Happy Harv,”that was screened last month during the Reubens Weekend of the National Cartoonists Society, is now available for viewing all over the world.

Because it is a wicked advertisement for my biography of Milton Caniff (Meanwhile...) in its unabashed elongated splendor, I encourage you to avail yourself of this unparalleled opportunity to watch ridicule on a colossal scale. Before you do, however, you need slightly more background than Hodler provided.

The video was part of the entertainment that festooned the last throes of the Reubens Banquet during which numerous awards for skillful cartooning are bestowed on various of the inky-fingered fraternity. Presiding over the festivities was the aforementioned Tom Gammill, who writes for shows including The Simpsons and Seinfeld. The conferring of awards and the ensuing parade of winners across the stage was punctuated by deliberately bad Gammill comedy—bits of so-called funny business in which he often enlisted the aid of the award presenters. And videos, would-be motion pictures, usually written by Gammill in his usual parodic lame manner. The first of these was “Godfather, Part II,” in which NCS prez Jeff Keane played the Marlon Brando role, his cheeks stuffed with wads of cotton. Of the three other videos, two featured Gammill, playing his usual role—that of a well-meaning but clueless and inept would-be cartoonist.

In the last video of the evening, I was the butt of the joke, the victim of cruel mockery—as I had been the previous year, when Stephan Pastis appeared before the NCS Godfather (again played by Keane, and superbly, too) seeking retribution for my having denigrated his drawing style in Pearls Before Swine by saying his stick figures looked like hors d’oeuvres on toothpicks.

With the foregoing as preamble, you can now enjoy the video in an enviable state of perfect comprehension. Which you should do now, before plunging any further along.

Did that? Okay, now read on.

Although I witnessed in person the premiere of the video at this year’s Reubens Banquet, I didn’t hear much of it because I’m half-deaf; ergo, at best, I heard only half of it, so I missed all the punchlines. I was told at the time that it was hilarious; but, as I say, I couldn’t, right then, testify to the height of its humor. As soon as it was on the Web, however, I could play it for my wife, who repeated the dialogue clearly enough in my ear that I could, at last, get the jokes. Having now succumbed to them, I also realize the true hysterical import of the video.

Gammill’s film poses as a dazzlingly executed parody of a Ken Burns documentary—groaning violins and stark-staring still black-and-white photos and all the rest of the usual painfully somber accouterments—but once your eyes become accustomed to the glare of its brilliance, the masquerade is revealed as a sort of “roast” of your Faithful Chronicler. “Sort of” but not quite: actual roasts provide the roastee with a chance to lash back at his tormentors by giving him a turn at the microphone at the end of the pie-throwing procession. Alas, the NCS Cartel provided me with no such opportunity, so I’m making one for myself—herewith.

To accomplish its nefarious purpose, the video invokes hazy memories of the notorious Donner Party, the group of 19th century American pioneers who set out for California in 1846 but, due to various mishaps, had to spend the winter of 1846-47 snowbound in the Sierra Nevada mountains. Nearly half of the group died of sickness and starvation; among those who finished the trek were many who survived by eating others of the party who had died. (Cannibalism is also an unintended aspect of Gammill’s video, as you’ll see anon.)

The video argues that Meanwhile: A Biography of Milton Caniff, Creator of Terry and the Pirates and Steve Canyon is too long, much like the book’s title. To accuse me of prolixity is a little like saying the sun gets up too early in the morning—as any regular reader of this picayune prose can readily attest. No matter: Gammill’s confection here behaves as if it has uncovered a secret plot of suicidal Islamist hooligans.

Veteran cartoonist and past NCS prez Mell Lazarus begins the assault by complaining early in the film that the Caniff book is over 900 pages in length. This simple bibliographic fact is too much for any bunch of cartoonists: they are accustomed to vast quantities of pictures but easily go all aghast when confronted by verbiage, of which, in 900-plus pages, there is, admittedly, a plentitude. So naturally, being nearly illiterate, they are daunted when confronted by so many words. Their fear and loathing of long books and long sentences (and even long words), is easy to understand: most of them, particularly those who produce comic strips in the cramped space newspapers allot to them, live in worlds restricted to 25-word vocabularies. In short, the book is too long for cartoonists to contemplate reading; the sentences, too long for them to comprehend.

The makers of the video happily contrive to ridicule their own illiteracy by making their encounter with the word “chiaroscuro” cause for an outbreak of internecine hostility, ending in the deaths of two fictional personages in the film. Unlike the historic Donner Party, half of whom survived, everyone in Gammill’s film dies while trying unsuccessfully to read the book—which, as I’ve admitted, is long and intimidating. I’m intimidated: I haven’t read it either.

While a goodly number of the individual gags in the video are as hilarious as its concept is complex and expertly realized, the film is essentially a one-joke comedy, and repeating the same joke, taking it from one extreme to another with each reiteration, drags the production out much too long. The repetition and the length together undermine the comedy: it becomes tedious, and with that, its length makes the video seem mean-spirited rather than humorous. (Did I say “too long”? Too long! Oh, sweet irony! Oh, delicious cannibalism! Self-devouring satire like this comes along only once or twice in a lifetime, kimo sabe. And I’m deeply grateful that it happened to me on exactly this occasion.)

Because several people after the screening asked me if I was offended, it’s clear that those people anyhow thought the video mean enough that it might offend its target. I, however, am far from being offended: I am honored, flattered. Yes, it is flattering to think that the Ruling Cabal at NCS thinks I’m important enough to ridicule. Me—a mere pipsqueak on the buttocks of the profession, a virtual nobody when considered in the company of such cartooning eminences as Milton Caniff, Al Capp, Mort Walker, Walt Kelly, Charles Schulz, Garry Trudeau, Alex Raymond, Hal Foster, Chester Gould (to name a few of the sort that once made up NCS membership). By the agency of the video’s attention, however, I have become large and important. (There: that ought to head off any future vendetta in my direction.)

Now, collapsing in a mixed metaphor, I lay aside the brickbats and custard pies: the roast is done.

P.S. The elegant lady who appears in the video using my book to smash peanuts is Jeannie Schulz, widow of Charles Schulz, the creator of the famed strip, Peanuts. Should we make anything of her obvious satisfaction in successfully shelling a peanut? Okay: they’re walnuts, but  walnuts aren’t as satirical in this instance as peanuts.

P.P.S. Any who wish to see the context of the video in the Entire Reubens Weekend might find their way to my Report: RCHarvey.com, Rants & Raves, Opus 278. The site is normally open to only paid subscribers, but for the Reubens Report (Op. 278), we have concocted one of our “open access” opuses, so you can enter and wander at will. 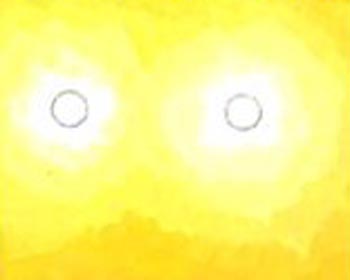