First, a little cinematic/literary/comic-book mystery. Most of you will remember this scene from Quentin Tarantino's Kill Bill: Vol. 2:

As everybody "knows," this whole dialogue was stolen nearly beat for beat from Jules Feiffer's comics-crit classic, The Great Comic Book Heroes. (I said so myself, back in one of the very first posts I ever wrote for Comics Comics -- kinda embarrassing to re-read for multiple reasons, lo so many years later.)

Or so it always seemed. Now things aren't so clear. As old CC readers will remember (and as one light-hearted fan will be particularly delighted to recall), I've been reading a lot of Pynchon lately. This binge didn't end with Gravity's Rainbow, but has now continued into Slow Learner and Vineland. (After 1200+ pages, I'm ready to take a break, so don't worry about me sharing whatever comic-book references may be found in Mason & Dixon until at least 2012.) Though there are certain very broad similarities in the way they both re-use tropes taken from popular and pulp genres, Quentin Tarantino's never struck me as the Pynchon type (he seems more like a Leslie Charteris man). However, the resonance between certain sections of Vineland and Kill Bill is startling. Namely, there's Vineland's blonde female ninja assassin DL Chastain, who can end a man's life by using an esoteric technique called the Vibrating Palm, or Ninja Death Touch—the victim doesn't feel it, "but a year later they drop dead, right when you happen to be miles away eating ribs with the Chief of Police." I'm not the first to notice these similarities, but one particular superhero-related congruence seems to have gone unremarked. You see, after this very Blood-spattered Bride-like figure is sent on a mission to kill a man who wronged her (and many others) years ago, she decides (à la Uma) that she'd rather just drop out of the whole assassin biz and start a new, less glamorous life. As she does so, she remembers an old, and eerily familiar, conversation:

"Superman could change back into Clark Kent," she had once confided to Frenesi, "don't underestimate it. Workin' at the Daily Planet was the Man o' Steel's Hawaiian vacation, his Saturday night in town, his marijuana and his opium smoke, and oh what I wouldn't give...." An evening newspaper ... anyplace back in the Midwest ... she would leave work around press time, make a beeline for some walk-down lounge, near enough to the paper that she could feel vibrations from the presses through the wood of the bar. Drink rye, wipe her glasses on her tie, leave her hat on indoors, gossip in the dim light with the other regulars. In the winter it would already be dark outside the windows. The polished shoes would pick up highlights as the street lamps got brighter ... she wouldn't be waiting for anybody or anything to happen, because she'd only be Clark Kent. Lois Lane might not give her the time of day anymore, but that'd be OK, she'd be dating somebody from the secretarial pool. They'd go out for dinner sometimes to this cozy Neapolitan joint down by some lakefront, where the Mussels Posillipo couldn't be beat. "So instead of being able to fly everyplace," her friend had replied, "you'd have to climb into some car you're still making payments on, drive on out, you, Clark Kent, to the scene of some disaster, blood, corpses, flies, teen technicians wandering around stoned, eyewitnesses in shock.... Superman never has to get involved with any of that. Why should anybody want to be only mortal? Better to stay an angel, angel." DL, more generous in those days, only thought her friend had missed the point.

So it's tough to figure out, right? Did Tarantino steal the dialogue from Feiffer, or Pynchon, or both? Or is it all just a set of crazy coincidences? I mean, David Carradine's original monologue is very close to Feiffer's, but connecting the Clark Kent/Superman idea directly to a blonde female ninja assassin seems so, um, unintuitive that it's remarkable that both Pynchon and Tarantino did it. My current theory is that Tarantino must have read this part of Vineland, then remembered the somewhat different Feiffer/Superman riff, and combined them together, but -- that's kind of complicated and implausible, and alternate suggestions are welcome. Figuring this out would be a good use of your time.

On to Comics Journal news:

Also, don't miss designer Eric Skillman's behind-the-scenes look at the upcoming issue 301, which will be out very soon.

Thomas Pynchon isn't the only novelist who takes inspiration from the comics. Ishmael Reed, author of the essential Mumbo Jumbo, has a new book coming out next month, which sounds interesting. As he puts it in a recent profile: "Since I don't like the modernist novel in which the omniscient narrator smothers his characters to death with psychoanalysis, they called my characters cartoonish. So I made this new character of mine a cartoonist. I've always been in a dialogue with my critics."

So, as is probably obvious to many of you, we aren't above a little light theft ourselves, an kind of stole the idea of "A Cartoonist's Diary" from a recurring feature on The Paris Review's website. Now they have cruelly snatched the idea back, and this week, they are featuring New Yorker cartoonist Zachary Kanin. (Day two is here.)

And finally, another video: 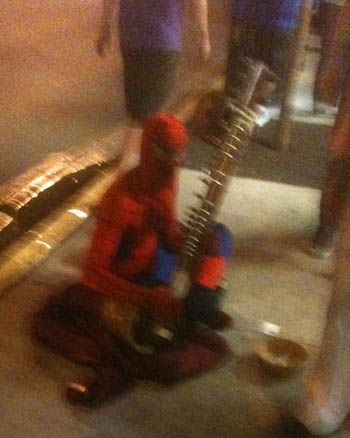 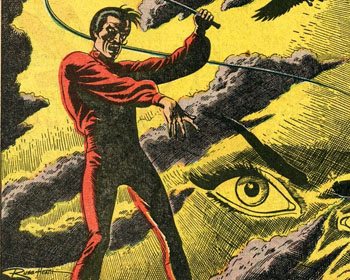