My gaze has been lifted been half to the skies this week, watching footage of the Artemis I launch from Kennedy Space Center, before firmly focusing back down to the ground, on more earthly, dare we say more important, matters once that particular vessel reached escape velocity - namely, the blogging of a selection of links pertaining to the comics industry and community, and the people who comprise both, all of which can be found below.

• Starting this week with a check-in on the continuing disquiet vis-à-vis Webtoon, as ICv2 reports that Leanne M. Krecic, creator of Let’s Play, one of the top-performing comics on the digital platform, will not be creating a fourth season for said platform, citing “ongoing difficulties for several years” - Webtoon has come under fire for a variety of reasons of late, including, but not limited to, poorly planned advertising campaigns, removal of revenue streams for creators, and allegations of unfair contracts, all as the company seeks to continue rapidly expanding in western markets.

• Elsewhere in the legal realm, as part of our now weekly ‘comic creator lawsuits’ section, Variety reports that producers of The Walking Dead, including Robert Kirkman, have filed a new lawsuit against AMC Networks to recover profits from the series, following 2021’s settlement of $200 million, in favour of Frank Darabont, in a similar suit. Kirkman was previously seen in this particular news section at the beginning of the year, when Invincible colourist William Crabtree filed suit alleging that Kirkman and representatives used ‘fraud and deceit’ to dissolve an oral agreement regarding co-creator status, and attendant revenue share, on the series.

• The return of auction news, as the hand-coloured Sunday strip from the May 24th, 1987 edition of Bill Watterson's Calvin and Hobbes sold on Thursday for $480,000, tying with Alex Raymond's first ever Flash Gordon to equal the record for the most expensive newspaper strip ever sold at auction.

• Koyama Provides announced the latest recipient of their grant program, awarding $1,500 to Patrick Allaby, which will be used to help fund development of “...a new graphic novel about the limited access to health care (particularly mental health care) that exists in New Brunswick, and how that leads people into the fraught territory of self-diagnosis.”

The New York Times asked Alan Moore for an obituary statement about his longtime collaborator Kevin O'Neill. Moore being Moore, he wrote a lovely 800 words far too long to use. Here it is. pic.twitter.com/GilMT3wGxV

Nicholas Burman reviews the utopian melodies of Michael DeForge’s Birds of Maine - “Pick up a copy of Birds of Maine to indulge in DeForge’s much-celebrated cartooning. Each page is composed of six panels, and each of these instalments arrives with its own impeccable color palette. Flick through the pages quickly and it’s like hurtling through a rainbow or an acid trip.”

• Justin Harrison reviews the stylistic mastery of Zoe Thorogood’s It’s Lonely at the Centre of the Earth.

• Lindsay Pereira reviews the unique questions of Keiler Roberts’ The Joy of Quitting.

• Andy Oliver has reviews of:

- The musical fantasy of Morgan Mei’s April’s Chop to the Top.

- The existential appeal of Christof Bogacs’ Meat 4 Burgers #1 and #2.

Have a starred capsule review of the evocative weirdness of Zach Weinersmith and Boulet’s Bea Wolf.

- The raw imagination of Zoe Thorogood’s It’s Lonely at the Centre of the Earth.

- The moving pathos of Nate Fakes’ A Fade of Light.

- The pensive cartooning of Floor de Goede’s Dancing on the Volcano, translated by Laura Watkinson.

• Tasha Lowe-Newsome reviews the layered adaptations of Above the Dreamless Dead: World War I in Poetry and Comics, edited by Chris Duffy.

Robert Newsome interviews Kyle Starks about Kill Them All, house explosions, the realities of having your work optioned for screen, and crowdfunding - “The biggest difference is that I would never ask an artist to do on a page the things that I would do on a page. I’m working on something right now, expanding something that I put out for Free Comic Book Day a while back, and I have 10- or 12-panel pages just left and right because that’s what’s needed for the pacing I was going for. I would never, as a writer, ask an artist to do that.”

• Chris Coplan speaks with B. Clay Moore about The Whistling Skull, regaining the rights to the character, and getting back to work on the property with Tony Harris; and with Amanda Deibert about Darkwing Duck, showing off more of Drake Mallard’s private civilian life, and personal favourites from the supporting cast.

• Hayden Mears interviews Geoff Johns and Todd Nauck about Stargirl: The Lost Children, collaborative origins, and the importance of sidekicks.

• Deanna Destito talks to Cullen Bunn and Sally Cantirino about Door to Door Night By Night, salespeople redemption arcs, and the winning mix of horror and comedy.

Chloe Maveal interviews Grant Morrison about 80s and 90s comics stories, the passing of Kevin O’Neill, the British tradition of kitchen sink storytelling, and taking aim at the tabloids.

Jim McLauchlin speaks with Comic Bug’s Jun Goeku about balancing the demands of a bricks and mortar store, and finding employees who share your work ethic.

Manuela Lopez Restrepo presents a conversation with Steve Martin and Harry Bliss about Number One is Walking, the succinct nature of cartoons, and breaking down anecdotes.

Steven Heller talks to Anuj Shrestha about climate change illustrations and the cognitive dissonance of our current era, and to Thomas Woodruff about Francis Rothbart: The Life of a Fastidious Feral and creating a complete world.

Shaenon Garrity interviews Gilbert Hernandez and Jaime Hernandez about 40 years of Love and Rockets, publishing origins with Fantagraphics, and characters ageing with their creators.

• Here at TCJ, Tegan O’Neil charts Ashley Wood’s journey through the direct market, and the return to print of the prescient humour of Wood and Chris Ryall’s Zombies vs Robots - “It’s strange to think of [Zombies vs Robots] as just another IP to be mined, with characters and sagas and such, when the story’s appeal appears to me more or less synonymous with appreciating Wood’s gorgeous art.”

• Also for TCJ, Alex Dueben writes in remembrance of Drew Ford, comics writer and editor and publisher of IT’S ALIVE!, who passed away last month aged 48 due to COVID-related pneumonia, also presenting tributes from those who worked with Ford - “When you spend much of your life not having someone to talk about your obsessions with, meeting people who share them, and introduce you to others, is a deep bonding experience. That’s one of the things that connects so many of us in comics to people we may not even talk to anymore. Those people who, when we mention something obscure, could name five even more obscure things - not showing off, but knowing them deeply and passionately, and seeking people with whom to share that love.”

• For The New Yorker, ahead of the reissue of Breakdowns: Portrait of the Artist as a Young %@&*!, Françoise Mouly provides a profile of creator Art Spiegelman at the time, and in turn presents an excerpt of Spiegelman’s commentary on the making of ‘Don’t Get Around Much Anymore’.

• Over at The Guardian, Jennifer Rankin reports on the push-back against certain murals in Brussels celebrating the city’s bandes dessinées heritage, which are viewed by some as racist and misogynistic in their imagery, and necessary to depict the full history of the form by others.

• For The Beat, Brad Ricca looks back at the origins of DC’s Slam Bradley, currently re-appearing in Gotham City: Year One, and the complex place in comics history that the character occupies.

• A pair of new entries in ongoing Shelfdust features, as Steve Morris covers the war between truth and fantasy in Mike Carey and Peter Gross’ The Unwritten #9; and Masha Zhdanova examines the details wilfully omitted from Hokusei Katsushika, Naoki Urasawa, and Takashi Nagasaki’s Master Keaton.

• From the world of open-access academia, another free-to-read comics tome, as De Gruyter makes available Comics and Agency, edited by Vanessa Ossa , Jan-Noël Thon, and Lukas R. A. Wilde, comprising a series of essays exploring the interrelations between individual, collective, and institutional actors within historical and contemporary comics cultures.

• Mike Peterson rounds up the week’s editorial beat, over at The Daily Cartoonist, as the post-midterm look-ahead to 2024 puts the spotlight back on one Donald John Trump, while Remembrance Day turned eyes squarely on the invader of Ukraine, before reports from the ground appeared to expand the fallout from the invasion to surrounding nations.

Every hero has an origin story, this is his.

As a tribute to the incredible Kevin Conroy, we've made his personal FINDING BATMAN story from DC PRIDE 2022 free-to-read on #DCUNIVERSEINFINITE: https://t.co/wz7WBdJCOl pic.twitter.com/hP6uHAXxXx

• Sally Madden is joined by Leomi Sadler for this week's Thick Lines, as Noel Freibert's Old Ground is discussed, including quality end-papers and the book's production process, its communicative characters, nominating America's best cartoonist, and thoughts on jigsaws and caulking equipment, plus some wider reading from 2022.

• Calvin Reid and Meg Lemke convened for the new edition of Publisher’s Weekly’s More to Come, as they discussed the publications of Tommi Parrish’s Men I Trust, and J.C. Deveney and Nuria Tamarit’s Giantess.

• David Harper welcomed Alex Ross to Off Panel this week, as they spoke about Fantastic Four: Full Circle, the project’s gestation and figuring out Marvel’s First Family, and telling the story after the success of Marvels and Kingdom Come.

• Closing out the week as weeks are wont to be closed, with a selection of Cartoonist Kayfabe fare from Ed Piskor and Jim Rugg, who took a little looksee at Josh Simmons and Patrick Keck’s Dream of the Bat, Frank Miller and Lynn Varley’s 300, the work of Jorge Zaffino, Richard Corben on Swamp Thing, and Todd Johnson and Larry Stroman’s Tribe.

That’s all for this week, no links for a fortnight now, for reasons that have something to do with turkeys. 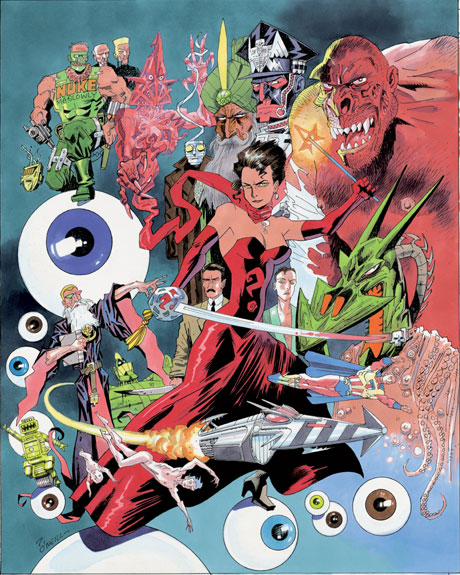 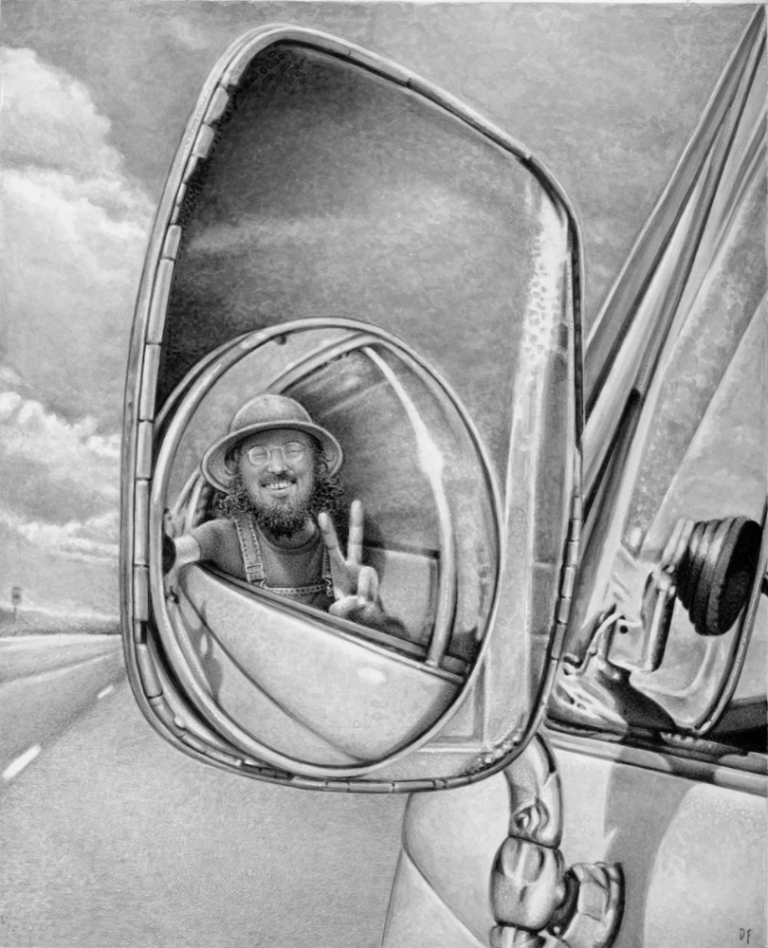 Drew Friedman’s Maverix and Lunatix: Icons of Underground Comix: “A masterpiece, a treasure, an encyclopedia”