I’ll keep this week’s intro brief, as any further typing at this stage is taking up valuable chocolate eating and egg painting/rolling time, for those celebrating the four day weekend of Easter, here in the UK.

Please imagine this week’s links, a selection of which are available below, to be entirely covered in sticky fingerprints and/or spilled craft supplies, for maximum immersion.

The never-ending scream… This week’s news.

• Record-breaking auction stories continue to be a fixture in the news cycle, as the collectibles market maintains its trajectory skyward, Icarus-like, and the private sale of a high-grade copy of Superman #1 for $5.3 million, to an anonymous buyer back in January, has become the most expensive comic of all time, while last week saw a copy of The Fantastic Four #1, featuring the comics debut of Marvel’s First Family, sell for $1.5 million, seven times more than its pre-sale valuation.

• Staying focused on the House of Ideas, and ICv2 reported on Q1 market shares for 2022, with ComicHub data placing Marvel at the top of the pile, carving out 38.8% of the available territory, with nearest rival DC Comics’ share falling to 24.3%, and Image Comics taking the bronze medal with 11.9% - only time will tell if this year betters 2021’s record setting sales figures in the comics space.

• A pair of comics prize stories, as Alison Bechdel is to receive the Washington University International Humanities Prize in recognition of “significant and sustained contribution to the world of arts and letters,” while Jeannie Schulz will receive this year’s National Cartoonists Society Silver T-Square for those “who have demonstrated outstanding dedication or service to the Society or the profession.”

• Elsewhere, Broken Frontier reports that London's Cartoon Museum and the British Association of Cartoonists have announced 2021's winners of the Young Cartoonist of the Year Competition, with Cara Grainger winning the under-30s category, Rohan Rooney winning the under-18s, and Bianca Hsu taking home the Woodcock Prize.

• Crunchyroll shares the announcement that Shueisha, Shogakukan, and Kadokawa are opening vertical manga editorial departments, looking to tap into the lucrative digital market, which has exhibited rapid growth throughout the COVID-19 pandemic.

• Sticking with vertical scroll, Webtoon announced that former DC executive Sandy Resnick has joined their ranks as Head of Rights, as the company continues its expansion into the US market.

• In other digitised comics news, continuing one of 2022’s ongoing stories, TorrentFreak reports on further litigation by publisher Kadokawa, this time aimed at YouTube users uploading manga to the video hosting platform, and again filing suit for user data along with the now-standard DMCA strikes.

• Koyama Provides announced the latest recipient of their grant program, awarding $1,500 to Derek Ballard, which will be used towards covering comics-making equipment, childcare, and household expenses.

• Closing out the week with a return to boats getting stuck news, as Publisher’s Weekly reports on the entire print run of Jordan Crane’s Keeping Two, published by Fantagraphics, being trapped aboard the container ship Ever Forward, which has run aground in Chesapeake Bay, mirroring last year’s Suez Canal Debacle.

• Brian Nicholson reviews the raucous experience of Gipi’s My Badly Drawn Life, translated by Jamie Richards - “This is just as much the story of a young man’s fucking around as it is a middle-aged man’s melancholic reverie, with youthful hijinx and aging’s indignities united by their shared theme of humiliation. There’s more to the book than just laughs and juvenilia, but the points emerge organically from this approach.”

• Henry Chamberlain reviews the exquisite success of Francisco de la Mora and José Luis Pescador’s Diego Rivera - “My pet peeve is when a critic, unsure about an uneven narrative, simply labels it as “disjointed.” That’s the classic easy way out for college freshmen on up. It’s an empty critique. A graphic novel is not a neat and to-the-point textbook.”

• Ryan Carey reviews the appetising snippets of Conundrum: An Annual Magazine of the Comic Arts #3, edited by Andy Brown - “...it becomes clear for those not in the know that this is a publisher with a wide range of well-done offerings that, admittedly, tilt a bit toward the refined and understated on the whole, but nevertheless are hardly confined to a narrow set of aesthetic values or editorial sensibilities.”

• Leonard Pierce reviews the unimpressive cartooning of Darryl Cunningham’s Putin’s Russia: The Rise of a Dictator - “I find it too close to the Great Man theory of history, the pernicious effects of which still hobble the analysis of so many important events. The implication that things would be more or less okay in Russia today if only this bad man Putin had been dealt with somehow suffuses almost every page of the book.”

• Alex Cline reviews the deft humour of Ruri Kamino’s Getting Closer to You.

Andy Oliver reviews the thoughtful creativity of Hell-Hued: The Periwinkle Issue, curated by Beatrice Mossman; and the endearing wit of Gareth A Hopkins, Martha Hopkins, and Bill Hopkins’ Ghosts in Things.

- The shallow briskness of Cristina Portolano’s Francis Bacon: The Story of His Life, translated by Katharine Cofer.

- The striking rawness of Joris Bas Backer’s Kisses for Jet.

- The hard-boiled history of Brad Ricca, and Courtney Sieh’s adaptation of Nellie Bly’s Ten Days in a Mad-House.

Alex Hoffman and Daniel Elkin review the harrowing beauty of Lanei Kasir’s It Hurts Until It Doesn’t.

hey, another new picture. at this rate i'll make... several by the end of the year pic.twitter.com/iOGwyDd9FI

Who do; you do… This week’s interviews.

From the archives, acting as a companion piece to last month’s interview, comes a conversation between Nick Hasted and Hunt Emerson, originally published in 1997’s TCJ #198, covering a life driven by art and the heyday of the British comics underground - “When rock ’n’ roll music came along, and the Beatles started, that was it, the end of everything. Life became one-directional. But up until then, it was just a childhood. I was always very into war, I know that: soldiers and war. I used to go out to school in the mornings — especially winter mornings when it was really foggy, and I couldn’t see the school at the end of the hill because it was so foggy — and I used to have these fervent imaginings that war had broken out and school had been blown up.”

Chris Coplan chats with James Tynion IV about The Sandman Universe: Nightmare Country and references to serial killers; Zack Kaplan and John J. Pearson about Mindset and leaning into dark thriller elements; and Jeff Lemire and Andrea Sorrentino about The Passageway and plotting out the shared universe of the Bone Orchard Mythos.

• Gregory Paul Silber talks to Richard Bennett about storyboarding and comics work, the freedom of comics compared to filmmaking, and favourite kaiju.

• Deanna Destito interviews Cassandra Peterson (aka Elvira) and David Avallone about The Death of Elvira, planning over martinis, death threats, and the campy nature of Elvira.

• Heidi MacDonald speaks with John Walsh and Jim Walsh about The Ballad of Ronan, the realities of contemporary group homes, Ireland's history with foster care and the Catholic Church, and Galway collaborations.

Teddy Jamieson talks to Sandra Marrs and John Chalmers (aka Metaphrog) about ‘The Graphic Novel World of Metaphrog’ exhibition, a shared love of Morricone and Hitchcock, and missing galleries during COVID lockdowns.

Anja Webb speaks with Talia Dutton about M Is for Monster, an enduring love for the Frankenstein myth, college memories, and the differences between webcomics and traditional print media.

Alex Dueben talks to Emma Hunsinger and Tillie Walden about My Parents Won’t Stop Talking!, meeting at the Center for Cartoon Studies, the agony of pant legs, and the labour intensive nature of comics.

Patrick Klepek speaks with Rob DenBleyker and Dave McElfatrick about Cyanide and Happiness’ moving crowdfunding business away from Kickstarter in the wake of the tech start-ups embracing the blockchain.

Bring back vellum, I say… This week’s features and longreads.

• Here at TCJ, Sean McTiernan examines comics’ courting of controversy, and when transgression works, compared to when it simply becomes trite, through the lens of Massimo Mattioli’s Squeak the Mouse - “It’s pretty obvious that Squeak the Mouse is an ultra-violent take on Tom and Jerry-style comic hijinks. This commentary by way of transgressive acceleration is a common approach in pop culture. It’s usually signaled by someone eagerly declaring it to be akin to a well-known piece of media on a drug they’ve never taken.”

• For the Los Angeles Review of Books, Austin Price looks back on Kohta Hirano’s Hellsing, its embodiment of old-school storytelling, and the inventive atrocities found therein.

• Women Write About Comics convenes a roundtable panel to celebrate the work of Akiko Higashimura, and the gateway drug of Princess Jellyfish; and Lucia Iannone examines the empathy at the heart of Superman: Son of Kal-El #5’s romance.

• Over at 13th Dimension, Paul Kupperberg picks a selection of favourite classic ads in comic books, including appearances from Evel Knievel and Hulk Hogan, as you’d expect.

• For From Cover to Cover, Scott Cederlund looks at Matt Wagner's Grendel: Devil's Odyssey, and how the character and its creator have evolved over the last 40 years.

• Shelfdust’s Dust to Dust series continues, as Steve Morris investigates the modernisation of The Daily Planet as found in Superman’s Pal Jimmy Olsen; and Shelfdust 500 also continues as Ewan Paterson looks into the heart of Batman: Ego; while Anna F. Peppard writes on the misogyny inherent in Superman’s Girl Friend Lois Lane #3, reflective of the misogyny inherent in society in general.

• Over at Hyperallergic, Lee Francis, CEO of Albuquerque's Red Planet Books and Comics, presents a reading list of Native American works, including A Howl edited by Elizabeth LaPensée, Acoma Pueblo's The People Shall Continue, Traci Sorell's We Are Still Here! Native American Truths Everyone Should Know, and Stephen Graham Jones' Memorial Ride.

• Mike Peterson rounds up the week’s editorial beat, as the judiciary and politicians at home and abroad dominated proceedings.

• Katie Skelly and Sally Madden welcomed Robert Newsome to this week’s edition of Thick Lines, for a chat about FLUKE and the winning gamble of Ebisu Yoshikazu’s The Pits of Hell, including thoughts on pachinko and boat racing, plus cakes.

• SILENCE! returned once more, as Gary Lactus and The Beast Must Die bid farewell to Steve Walsh and Garry Leach, before diving into recent comic releases, including Dark and Golden’s re-release of Mek Memoirs.

• Also returning, after a slightly longer hiatus, Kieron Gillen revived interview podcast Decompressed, with a new series speaking to those currently embroiled in navigating the good ship Marvel’s Properties Linked to the X-Men, with opening salvos from Steve Orlando and Al Ewing.

• Drawn & Quarterly hosted a new edition of At Home With…, as Jessica Campbell celebrated the launch of RAVE, and discussed being raised in an evangelical church, and favourite book designs.

• Dan Berry welcomed a fresh guest to Make It Then Tell Everybody, this time around speaking with Jeremy Sorese about the shifting focus of publishing, teaching the art of creation, and the clarity of age.

• David Harper was joined by Mike Del Mundo and Mike Huddleston for this week’s Off Panel, as they discussed various aspects of 3 Worlds/3 Moons, and what goes into/comes out of the whole Substack thing.

• Gil Roth welcomed Anneli Furmark to The Virtual Memories Show, as they discussed Walk Me to the Corner, Swedish winters, comics and aht, and living through the pandemic.

Goodbye, Eri joins the Hot Series page this week! A one-shot by by Tatsuki Fujimoto, the creator of Chainsaw Man, about a young man who makes a movie that changes his life! https://t.co/mSx1ex66WX pic.twitter.com/W9xpMhBtvf

That’s all for this week, back soon with more, after this sugar high dissipates and my fingers stop shaking so much that I cannot type.

clouds are so fucking hard to paint pic.twitter.com/LC1TWZlMmn 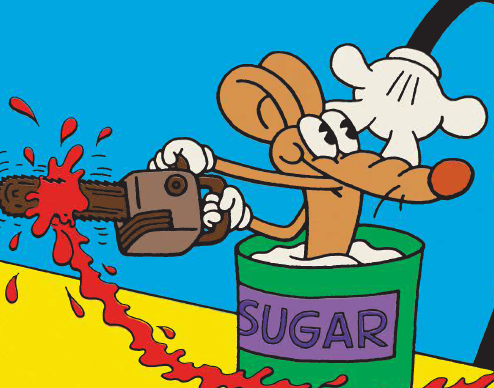 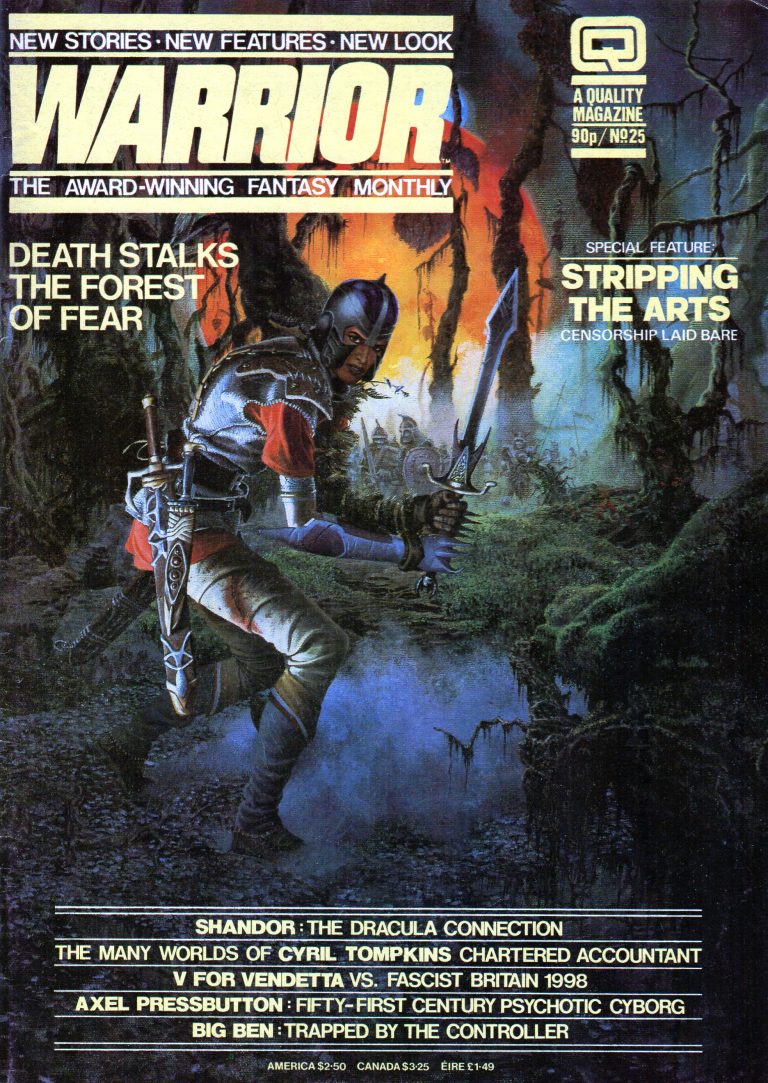 Garry Leach: A Life in Comics