On the convention floor I met supercollector Jean Depelley. We've talked on the phone and via e-mail, but this was our first real meeting. He told me about the Kirby biography he's been working on, focusing on Jack's war years. He's put together a timeline of when and where Kirby was during the war, based on Jean's interviews with the children of the soldiers Jack was stationed with. He's visited the sites of various battles that Kirby had been involved in. I can't wait to read it. He said he'd also like to put together a comic depicting Jack Kirby's war stories. He's even gone as far as tracking down the exact brand of cigar that Kirby smoked. He's smoked it, it comes in two flavors, one of which being vanilla. He said they're disgusting, very cheap cigars. Kirby drew on toilet paper (according to Mike Royer), worked at a shoddy desk and created the greatest comics ever.

A lot of fans during Marvel's heyday thought that Jack (and Steve, too) must've been taking hallucinogens to summon up the shamanistic visions he was putting on paper. Kirby was (and Ditko even more so) a straight arrow and his only vice was his cigar. More than once during my trip to France I'd heard the theory that the tobacco was a lot stronger back then and that the amount that Kirby smoked would be enough to send someone into an altered state.

Jean comes to Angoulême every year, but this one was a big one for him, because there was going to be a screening of a new documentary that he co-produced about the French censorship of Marvel Comics. French super hero comics history is very strange to me. Super heroes are a fringe thing in France. The fringes are probably where superheroes belong, rather than being the center of the American comics industry.

This is the day where I  saw the real Angoulême. Huge lines to get in. A surge of humanity. Around lunch time the town square was littered with Quality Burger wrappers.

European fans expect that if they buy a book the artist will do an elaborate "dedica" in the book. I did a ton of those. I enjoyed every second of it though. I had a new refillable brush pen that I wanted to try out. It was fun. 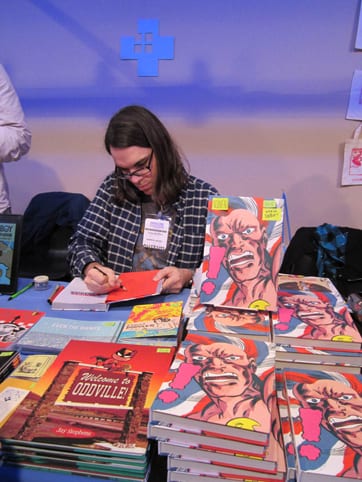 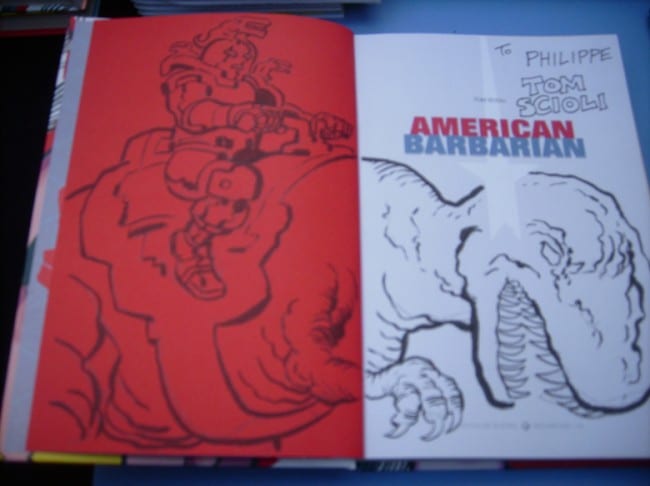 I was basically a drawing machine for the rest of the day. The podcasters from Orbital Comics came back to try to interview me again. It seemed like no time had passed in the interim. I was doing dedicas as we talked, so I'm not sure what I said during the interview. It was automatic  speech, a reverse of the usual dynamic of doodling while you talked. I was talk-doodling while I drew. Probably not the best idea for an interview. It'll be interesting to see what I said.

At this point the city is packed, so we set out for the all-you-can-eat buffet, which is big enough and far enough away from the center of things that the chances of getting a table are pretty good. We had to wait a while, but did get seated. At this point I made a number of trips to the ice cream bar. Since Chris was with me this time, I felt like I had some ice cream back up. He let me down though and only ate one bowl. He took a picture of our group and fell backwards against the shelves where the buffet plates were kept. The shelving unit rocked back and forth 3 or 4 times and then settled down. Disaster averted.

Checking the internet that night I saw that the crowds at Angoulême were down from last year, probably because of the economic crisis in Europe. Angoulême on a bad year blows away every comic show I've ever been to.

Tom Scioli is the author of American Barbarian and the co-creator of Godland. 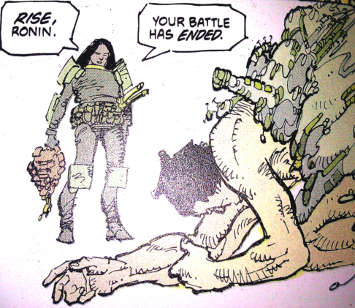 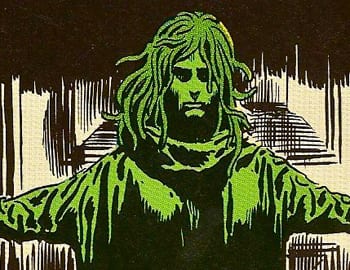