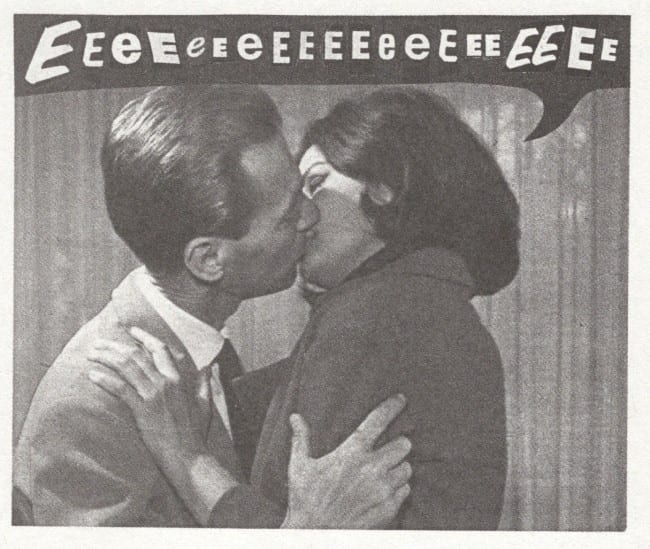 Above we see the newest work from Julie Doucet, one of the absolute titans of the Canadian alternative cartooning generation to rise to prominence in the 1990s - her new book, Carpet Sweeper Tales, arrives in comic book stores this week. It's an unusual work, which some readers will probably slot in with the 'post comics' collage or mixed media output Doucet has shown in books like Lady Pep (2004), which is to say it won't be read as 'comics' in the way a new (let's say) Chester Brown book will, even if the new Chester Brown is 1/3 prose-format annotations.

However, there is a very strong sense of sequence to the images in Carpet Sweeper Tales, a through-line that creates an undeniable sense of narrative. There is only one panel per page in this book, with each panel comprised of imagery from '60s or '70s photo-romans, and words clipped from American magazines of the quarter-century following World War II. You can probably sail through the whole book in ten minutes if you want, and many of its twenty or so vignettes will read like absurdities, with stiffly-posed Italians spouting bits of random advertising jargon at one another. And, indeed, part of the appeal here is aesthetic, or graphic - to appreciate the simple juxtaposition of fancy typography against stern or perplexed faces. Moreover, Doucet, in a four-word introduction, requests you read everything in the book out loud - this is much harder than it seems, as some of the text is made up of symbols, and many of the words are broken down to some (not all) of their component letters. In this way, the book also evokes experimental vocal performance - Meredith Monk, for instance. 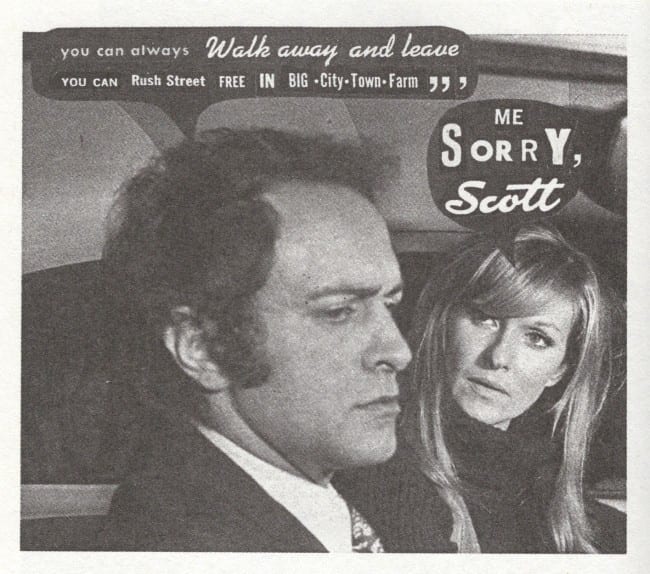 Still, a curious thing happens as you enunciate your way through Doucet's tiny tales: the words, despite their formulation, take on the contextual properties of language. Above, for instance, we see a scene from a sexual negotiation; while we cannot *exactly* discern what it being said, page by page it becomes clear that the characters are fumbling through the transaction of a date, which is to say the man is selling himself through a words we can at least identify from the linguistic family of advertising. Handsome people sitting in cars - this was a dream of the midcentury, and Doucet suggests a world in which communication is now exclusively possible in some damnable derivation of those commercial terms. Eventually, she even breaks the whole thing down into empty quotes and absent clauses. 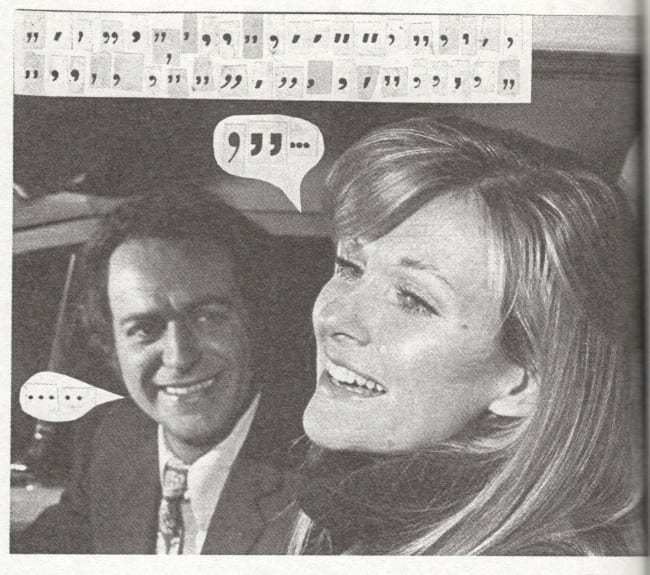 The bleak joke is that the visuals are taken from the action series Jenifer Top Secret - terms are not agreed upon, and the man attacks the woman; no doubt he is 'really' an enemy agent of some sort, but Doucet's version draws out more than a hint of sexual violence, of a man attempting to seize a 'product' to which he perhaps feels is entitled. Quite a lot of masculinity aggression is parodied in these pages, with happening mods reduced to desperate and half-formed desirous babble: 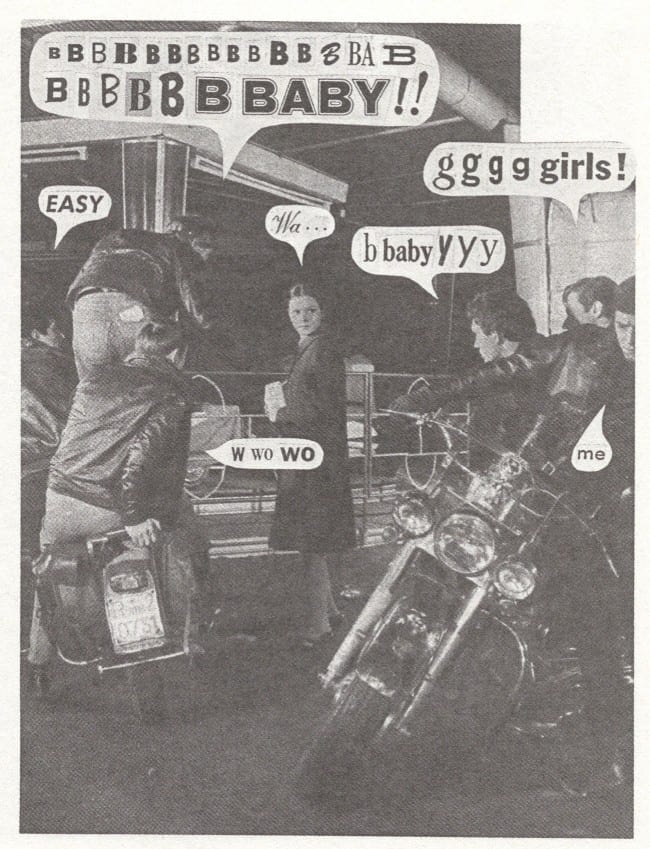 This too eventually leads to violence - a good ol' rumble, in which the dialogue withdraws even more into one-letter exhortations, like roars of anger or pain, related enough to the simple-speak we've seen before to link their sexual aggression to the violence thrown at one another. 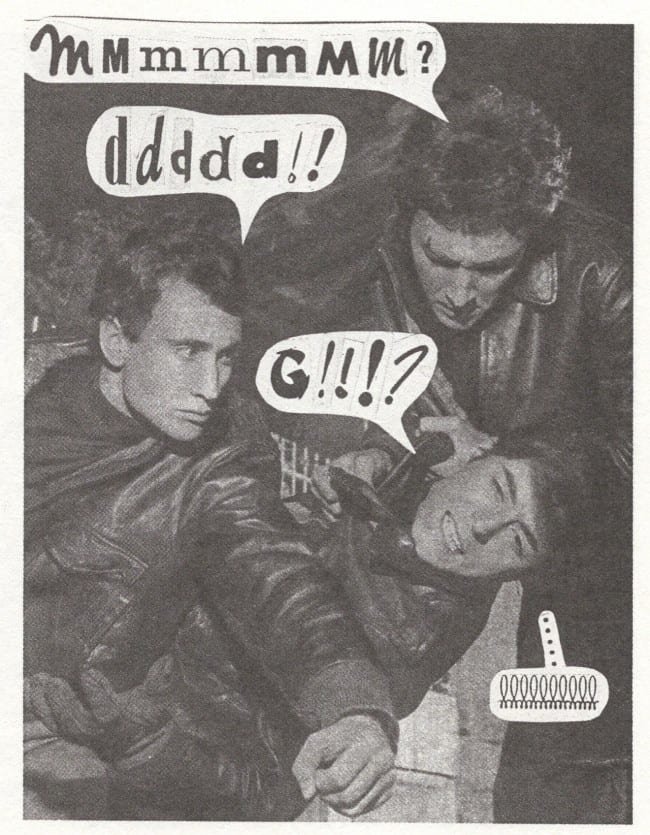 And then, quite late in the book, Doucet introduces the startling presence of clear dialogue. 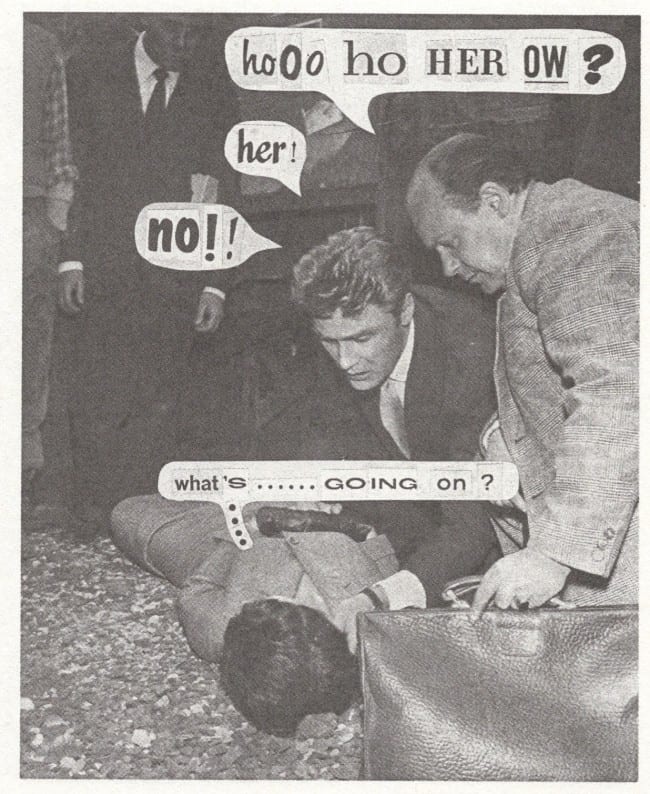 It's in the context of an abstracted murder mystery, with a woman's corpse speaking in 'our' English while living passerby chatter on in Doucet's ad language - which, in such sharp comparison, seems more like a language than ever before. There is a trip to the afterlife, and considerations of how one perceives reality, though Doucet has already made her statement - communication in these pages is not impossible, but from a distance it seems abstract. And the distance she gives us, through her comics artifice -- the photograph faces of real actors necessary to distance us, where the alterna-reality of drawn pictures might pull us in -- is the sensation of standing just apart from the advertising blitz that not only tempts us to buy products, but sets the agenda for the types of conversation we have... what kind of political candidates are most newsworthy, say, or how we compose our dialogue on for-profit social media. Doucet suggests this is all just a veil we might step beyond, for just a little while, to reexamine our words - even if that means surrendering, for a moment, our claim to life right now itself. 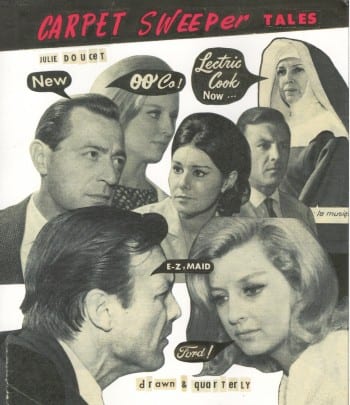 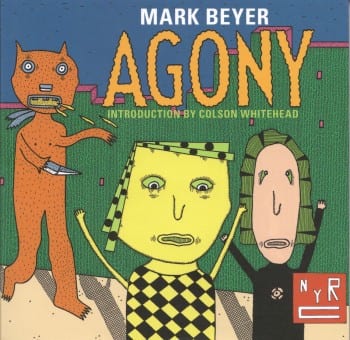 Agony: "They left me for dead, but I didn't die!" This statement appears on pg. 116 of Mark Beyer's 1987 alt comics classic, but, subtextually, it occurs in each and every panel as poor Amy and Jordan suffer a relentless parade of misfortune at the hands of criminals, creatures, institutions and happenstance, frequently with no recourse but to enunciate their situation plainly to each other. In his introduction, novelist Colson Whitehead gives even odds on readers finding this bleak display "relentlessly downbeat or improbably uplifting," though I've always found a great sense of fancy (even whimsy) in Beyer's drawings that place him on the fine continuum of gag cartooning. Not unrelatedly, I suspect, the nascent New York Review Comics will be releasing collections by idiosyncratic humorists Glen Baxter and Abner Dean in the not-so-distant future, although this 5" x 5" softcover reprint is the means by which they announce their existence to us. Samples; $15.95.

Goodnight Punpun Vol. 1: Big, big manga week, and this 448-page VIZ release may be the biggest. I briefly wondered if I should put this up in the spotlight -- Amy and Jordan can probably withstand another disappointment, I surmise -- but then I realized that surely the internet will take care of this one for me. There may be no more fervently, viscerally adored a cartoonist in the translated-from-Japanese sphere than Inio Asano right now, and the 2007-13 Punpun is his biggest work, charting the youth of a boy drawn on the page as a mere doodle amidst the laborious cartoon realism of commercial manga, adrift unhappily in a human society of firm expectations. Popular stuff among scanlation readers, and we will now see if the publisher's two-in-one localization strategy (which should place the entire set at 6 or 7 books) can translate that to financial reward; $24.99.

Princess Jellyfish Vol. 1: Not just a big week for manga, in fact, but for guests on Naoki Urasawa's NHK documentary series Manben, which sticks small cameras all over a mangaka's studio as they work - Urasawa and the artist then offer commentary on the resultant footage, typically with emphasis placed on the practice of drawing. (Unofficial translations for the pilot and the entire first series can be found online without much trouble.) Inio Asano was a guest, as was prolific Akiko Higashimura, here making her English debut via Kodansha. A comedy aimed at adult women, Princess Jellyfish concerns the zany inhabitants of an apartment complex through a story replete with fashion, cross-dressing and delayed life aspirations. At 376 pages, this is also a two-in-one release, as 15 volumes are out in Japan. Preview; $19.99.

Master Keaton Vol. 6 (&) Real Vol. 14 (&) Prison School Vol. 3: Speaking of Urasawa, his Master Keaton series of sentimental insurance investigation adventures (co-created with Hokusei Katsushika & Takashi Nagasaki) reaches what I believe is the halfway point of its main series run. I suspect a number of fans have jumped off by this point due to the series' episodic and fairly repetitive nature, but I've found this preferable to the tear-stained vamping that marks Urasawa's longer narratives. (Pluto, goofy as it could be, was probably the ideal length.) But that's not all the seinen world has to offer! Real continues prodigious draftsman Takehiko Inoue's saga of wheelchair basketball, its English releases now completely up to date with the Japanese editions. And Prison School advances Akira Hiramoto's zero-chill exploration of coeducational thirst another two Japanese volumes, which is still nowhere near the 20 installments available in its original language; $19.99 (Keaton), $12.99 (Real), $20.00 (Prison).

Circuit Breaker #1 (of 5) (&) G.I. Joe: Deviations #1: In contrast, neither of these comic books are actually from Japan, though they do explore distinctly Japanese influences. Circuit Breaker is the new Image project from veteran artist Kyle Baker, teaming with writer Kevin McCarthy for an Astro Boy riff in which a teen girl robot is pitted against mechanical war veterans who have taken to terrorizing the human society that rejected them. This one's been several years in the making, with a visual approach that translates Tezuka through a sort of graffiti-like approach to color drawing. Deviations, meanwhile, is another IDW licensed comic for those all-American Hasbro action dolls, but drawn by Corey Lewis in a booming and dynamic manner akin to an edgy contemporary shōnen manga. The writer is Paul Allor, whose story ties in to an alternate universe theme running through many of IDW's license comics at the moment. Circuit preview, Deviations preview; $2.99 (Breaker), $4.99 (Deviations).

Astro Boy Omnibus Vol. 3: And here, if you don't already have it, is some original Osamu Tezuka stuff, with publisher Dark Horse scooping up three of its prior Astro Boy releases (vols. 7-9, which are not in chronological order, nor do I think they contain anything other than self-contained stories) into a 696-page super-edition. Samples; $19.99.

Amadeo & Maladeo: A Musical Duet (&) The Imitation Game: Alan Turing Decoded: A pairing of two potential 'literary mainstream' graphic novels. Amadeo & Maladeo, a 256-page fable about half-sibling violinists born into different social classes, is the latest work from cartoonist, animator and illustrator R. O. Blechman, a longtime favorite of highbrow venues. Fantagraphics publishes the color hardcover. The Imitation Game is an Abrams release, a graphic biography of the type bookstores tend to like, helmed by two experienced talents: writer Jim Ottaviani, of quite a few science-related books, and artist Leland Purvis, who goes back to self-published works in the late '90s. Note that this work originally appeared as a webcomic at Tor.com in 2014, around the time of the Turing biographical film of the same title; $24.99 (Amadeo), $24.95 (Imitation).

The Glorkian Warrior and the Mustache Of Destiny: And then there's the ever-popular children's comics scene, represented this week, in this column, by James Kochalka, continuing a First Second-published sci-fi comedy series with a video game component. This is the third of the books. Preview; $14.99.

The Complete Crepax Vol. 1 (of 10): Dracula, Frankenstein, and Other Horror Stories: Finally, your undisputed Eurocomics release of the week, a book so huge I had to put it at the bottom of the column - Fantagraphics' 10.25" x 14", 440-page debutante collection of works by Guido Crepax, one of the supreme stylists of Italian comics. Though best known for dreamy eroticism, Crepax's facility with the page could heighten many different subject matters, as this tome demonstrates through its horror narratives, spanning a good deal of his career; in fact, I believe Crepax's Frankenstein was his final book, completed before his 2003 death from multiple sclerosis. Also included are also some prime '60s and '70s stories for the artist's signature heroine, Valentina, and various supplementary texts; $75.00. 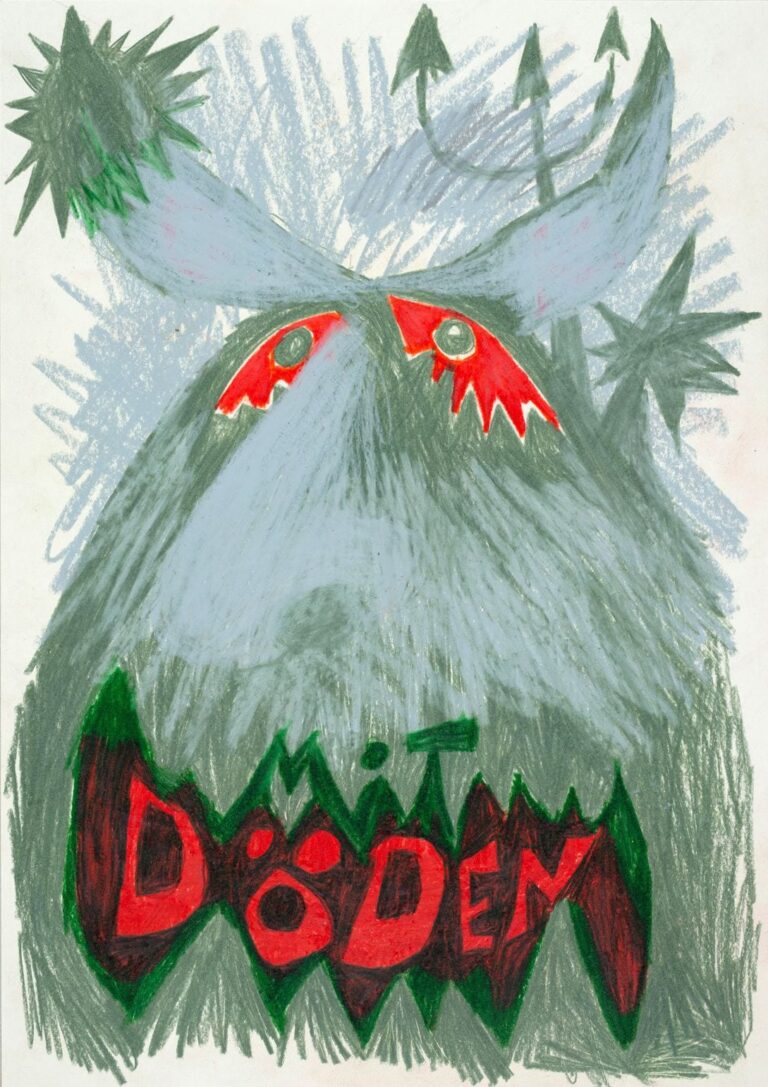 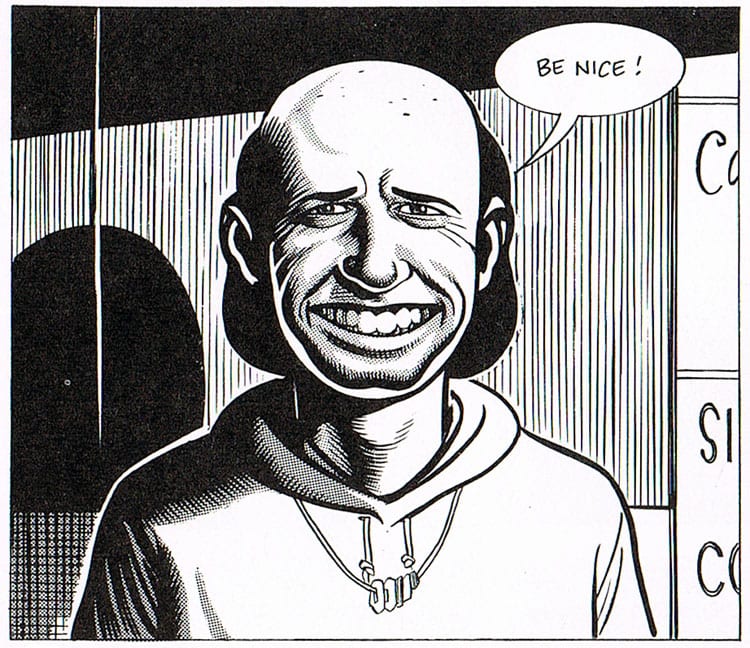