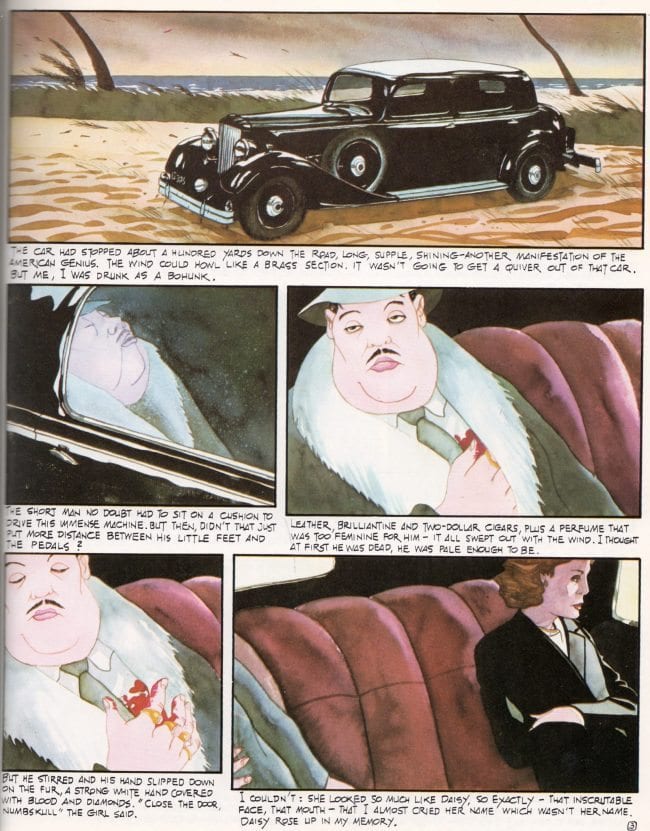 Nothing much up here this week; mostly I've been returning to comics I've admired in the past. I dearly love these short pieces from artist Jacques de Loustal and writer Philippe Paringaux - this one's from Catalan Communications' 1988 English edition of their '82 story collection Love Shots ("Clichés d'amour"). It's a pair of French guys surveying a mythic USA through the lens of crime fiction, movies, postcards, murder sprees... all the exportable media. But what's most interesting to me is the means of narration, with Paringaux's text running in the gutters below Loustal's images, which remain slightly out of step with the tempo of the writing.

The activity depicted on the bottom 2/3s of the pages takes at most a few seconds to occur, while the text lingers, adding details that aren't drawn, elaborating upon the psychological state of the observing character. It's not as heavy as the old EC comics captions, which sat heavily on top of every panel, specifically because the juxtapositions of words and pictures *don't* exactly match; furthermore, by setting the text apart from the panels -- it doesn't occur here, but sometimes one portion of the text will snake beneath multiple panels on one tier -- the creators promote an especially aloof and contemplative tone, which is apropos for a series of fantasies on manufactured narratives. You see a picture or two, read the text, maybe glance back up at the pictures, then down to the next tier, without really feeling like you're violating the narrative flow as you would with 'tighter' comics. Instead, you survey the information given, until a conclusion is met... 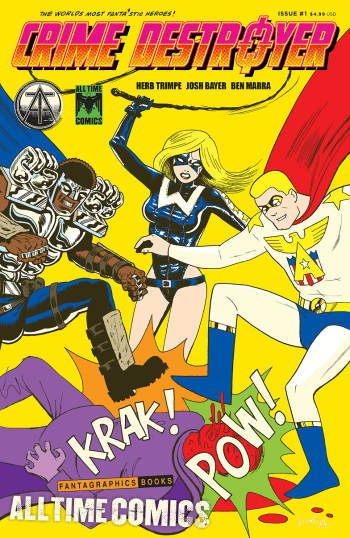 All Time Comics - Crime Destroyer #1: Comics publishing isn't what it was decades ago; a publisher like Fantagraphics can release Peanuts, Mickey Mouse - even a longform homage to the aesthetics of bygone Marvel comics a la Hip Hop Family Tree. Moreover, launching a new shared universe of superhero characters in the stapled comic book format arguably ranks pretty high on the perversity scale in these days of franchise consolidation and alternate distribution mechanisms, so: here is the 36-page debutante release for All Time Comics, probably the most nitty-gritty genre-focused Fanta has been since Monster Comics in the early '90s, although this *particular* issue offers its own rather retrospective poise. The penciller is Herb Trimpe, a Marvel comics mainstay who died in 2015 at the age of 75; while sometimes described as a quintessential reliable craftsman, for many years indie comics people would whisper about a 1971 issue of Iron Man that Trimpe turned around in just a few days' time, resulting in a more gestural texture than typically allowable by the House of Ideas. Crime Destroyer is his final comics work, inked by Benjamin Marra of Terror Assaulter, whose own taste for askew genre styling may find subtler purpose in such a role. The writer is Josh Bayer, a hard-drawing small-press mainstay who looks to be working in a more deliberately constrained throwback mode than the likes of Michel Fiffe's Copra or Tom Scioli's recent Transformers vs. G.I. Joe (co-written with John Barber), which are extremely specific auteurist takes on a pool of corporate images. This looks to be very much a team effort circling a bygone impulse, albeit with many different artists (and maybe approaches) yet to come. Preview; $4.99. 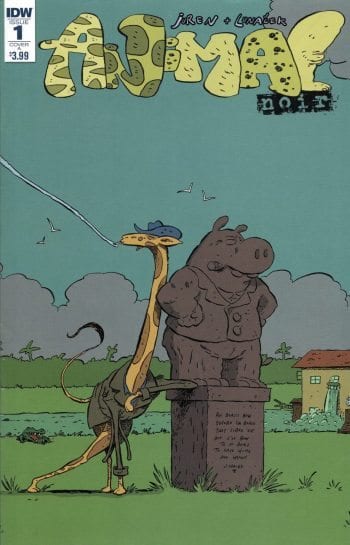 Animal Noir #1: Hey, I wrote about this last week. In fact, I thought it was coming out last week, but Diamond is saying this week, so: IDW presents Slovenian creators Izar Lunaček & Nejc Juren, who've put together a new comic book series about a giraffe detective investigating the porno underground of lions and gazelles in a city of civilized critters informed by detective fiction and European comics such as Dungeon. Actually, didn't Zootopia just win an Oscar the other night? I turned the show off after Suicide Squad won Best Makeup and Hairstyling, because my body was overwhelmed with ecstasy. Preview; $3.99.

Simply Samuel: A new release from Tommi Musturi, an energetic artist and one of the principals behind the recently-shuttered Finnish comics publisher Huuda Huuda. I'm always glad to see his works in North America, and this 160-page, 8" x 8" Fantagraphics hardcover is a swift new edition of a wordless graphic novel released in nine European nations last year. It's Musturi's second color book featuring a ghost-like character, very slick and brightly cartooned, with "themes of individuality and loneliness, and of freedom, pondering our daily actions and the choices and values behind them," per the publisher; $24.99.

Corto Maltese: In Siberia: Being the fifth IDW softcover collection of refined adventure comics by Hugo Pratt, now seeing the artist exit the youth comics zone of France's Pif Gadget (where the prior four books' worth of stories were initially published) for the adult-targeted Italian comics magazine linus, 1974-77, and later the newly-launched mature bande dessinée venue (À suivre), 1978. The Great War is over, and Corto Maltese is on a globe-trotting hunt for treasure spanning all 120 of these 9.25" x 11.625" pages; $29.99.

Star Trek Gold Key 100-Page Spectacular: More from IDW, which sometimes puts out special-format samplers for their various wares. The publisher has been releasing collections of the Gold Key Star Trek comics (1967-79) since 2014, and this fat, low-priced comic book promises a selection of three stories (one of them scripted by Len Wein, making this a big week for fans of the early Wolverine talents) and an essay on the long-running series; $7.99.

Reich #4 (of 12) (&) Cerebus in Hell? #2 (of 4): This isn't a very busy week in terms of new books that interest me, so let me draw attention to two ongoing miniseries seeing the brisk release of new issues. Reich is Elijah Brubaker's comic book biography of Wilhelm Reich, initially published by Sparkplug and now distributed by Alternative Comics. Apropos of nothing, orgone is my all-time favorite esoteric energy source, a fact I plan to put into use in the near future across several different formats, such as adults-only performance art. Cerebus in Hell? is a cut 'n paste humor series from Dave Sim and Sandeep Atwal, released by Aardvark-Vanaheim in commemoration of the Cerebus series' 40th anniversary. Issue #1 had a catalog page with the motto "LONE WOLF & CUB IS DEFINITELY LONGER AND MORE POPULAR" which made me laugh pretty hard; $3.00 (Reich), $4.00 (Cerebus).

Dave Stevens' The Rocketeer - Artisan Edition (&) Neil Gaiman's Mr. Hero the Newmatic Man Vol. 2 (of 2): And here's two throwback entertainments (of sorts), back on the market. The Rocketeer Artisan Edition is kind of a budget-deluxe offering, with all of the art presented as shot in color directly from writer/artist Stevens' original pages, but in softcover form at smaller (8" x 12") dimensions than publisher IDW's similar Artist's Edition line. Of course, I expect this 1982-95 serial of old-timey derring-do would be a handsome read in most formats. Mr. Hero has Neil Gaiman's name in the title, but it was primarily the work of writer James Vance and penciller Ted Slampyak, pushing against the dictates of Tekno Comix's shared-universe ambitions to present an unusual robotic superhero series. Super Genius's concluding 232-page collection, available in two formats, should also feature a new introduction by Vance; $39.99 (Rocketeer), $14.99 (Mr. Hero softcover), $24.99 (Mr. Hero hardcover).

Revolutionary Girl Utena Deluxe Hardcover Box Set: Finally, a bit of personal narrative - among the high-profile television anime of the 1990s, the two I think about most today are Neon Genesis Evangelion and Revolutionary Girl Utena, both of which accosted the seemingly generic qualities of their market-ready concepts with artistic daring. Ostensibly a gender-bending heroic tale a la Osamu Tezuka's Princess Knight and Riyoko Ikeda's The Rose of Versailles, the Utena anime erupted into a theatrical riot of vivid emotional and metaphysical colors. Also like Evangelion, a manga was produced in conjunction with the television show, intended to arrive first in the public eye. But while Yoshiyuki Sadamoto's Evangelion comic famously took over eighteen years to finish, artist and project co-creator Chiho Saito managed to lay down the entirety of the Utena serial between 1996 and 1998, while working on a totally different series (the award-winning music-themed Kanon) for much of the same period. That said, the Utena comic ran in the young-skewing shōjo magazine Ciao, and I don't recall it retaining all that much of the anime's presentational bravado; it's more of a traditional concurrent franchise item, albeit one drawn by a principal of the franchise at large. Nonetheless, VIZ has now afforded the series a fancy 960-page two-volume hardcover slipcased format, with special color segments, a poster, and the entirety of Saito's 1999 comics adaptation of the franchise's full-throttle movie iteration Adolescence of Utena. Crack the world's shell; $49.99. 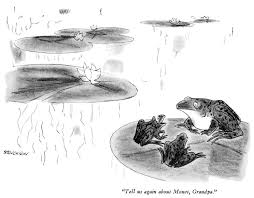 Tell Us Again About Monet, Grandpa 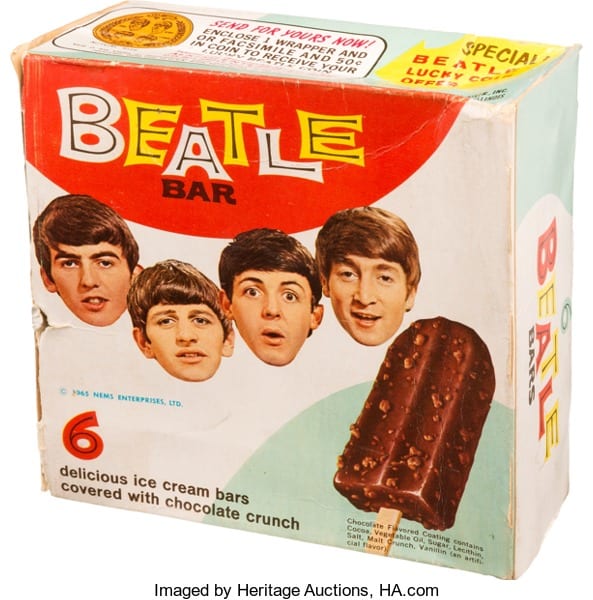