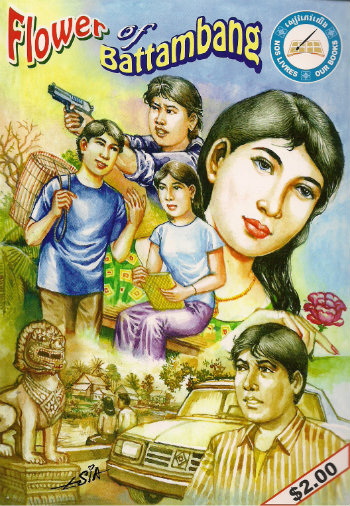 I think it's fair to state that the Brooklyn Comics and Graphics Festival doesn't have quite so tight an aesthetic on display as it did early on. This is natural - artists evolve, and so the participating exhibitors, many returning from prior years, have gone off in slightly different directions, evolving at their own pace.

Nonetheless, I had never expected to see something like that to the left at this year's festival - an 8" x 5 1/2" digest comic with a glossy painted cover, 100 pages for two dollars. John Porcellino was selling 'em via his Spit and a Half distribution service (Ctrl+F "Satya"), and he told me the artist, one Em Satya, was Cambodian. As I know absolutely nothing about the Cambodian comics scene, I was pleased to see that the publisher -- Phnom Penh's Our Books -- had included a generous six-page biography of the artist in the back of the book, complete with select (b&w) illustrations from his varied career in novel cover illustration, children's books, and comics.

Apparently, Flower of Battambang is his first book in the graphic novel format, though I'll confess I was a bit more taken by the disclosure that the story was influenced in parts by both Cambodian classical art and Indian cinema. 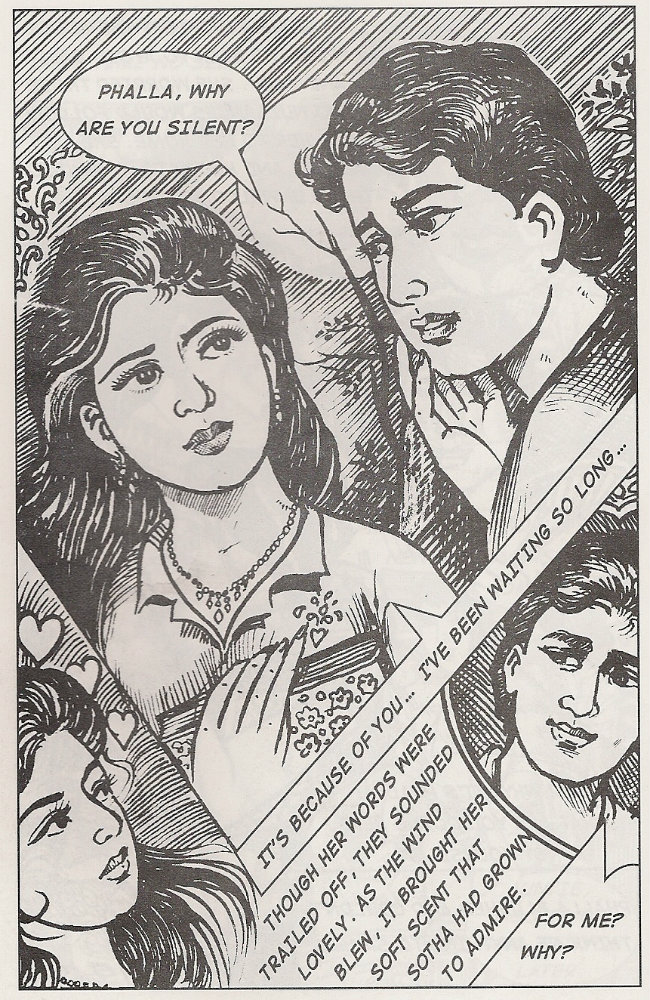 The art in Flower of Battambang, particularly its early pages, displays a pretty striking grasp of simple page design; I don't think there's a single page in the story with more than four panels on it, so an illustrative, almost poster-like aesthetic prevails. Per his bio, it took Satya over a decade and a half to finish the story; initially nobody was interested in publishing the work he'd completed, and then he suffered a stroke, and essentially taught himself to draw again in the process of completing the book. There is indeed a noticeable shift in drawing among different pages -- of course, I have no idea in which sequence the pages were completed -- where both the figure work dials back in detail to a more gestural feel, and, at other times, the pages become dominated by splash images bedecked with explanatory text, with characters showing a heavier shading attributed to the artist's latter-day interests.

As such, the book is both a story, and also a struggle, half-understood by the reader as the artist's mission to complete that long goal of making comics. 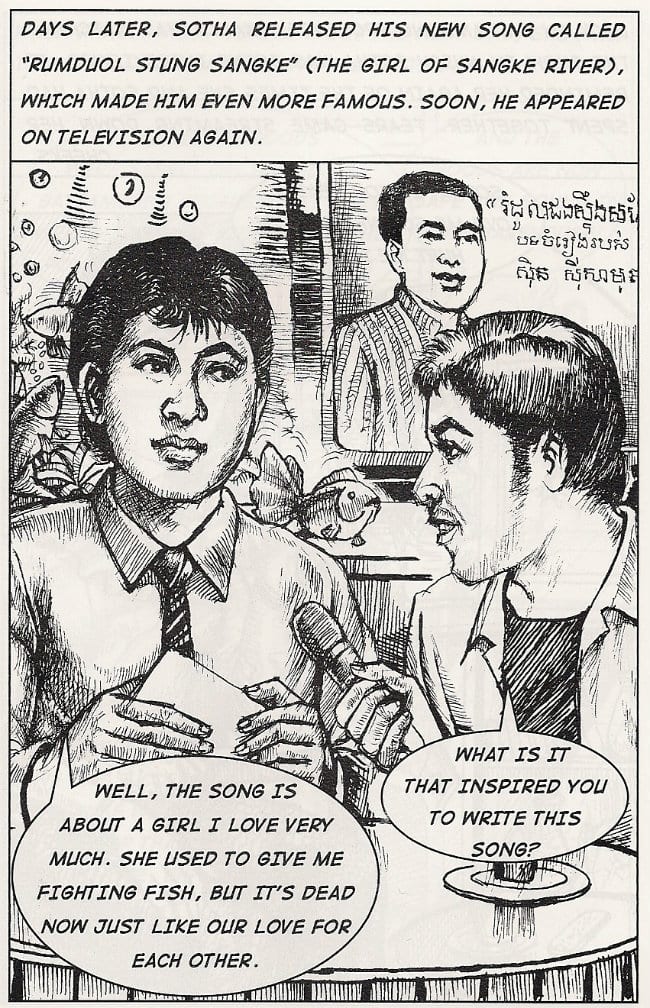 This is one of the 'heavier' pages, depicting hero Sotha's transformation into a popular music star; were this a proper Bollywood movie, we'd be hearing all of his chart-topping hits, but Satya maintains an illustrative distance, as if we're only receiving occasional scene transmissions from the movie in his head. As far as Bollywood goes -- I'm limiting this to Hindi-language cinema, both as an educated guess and because "Satya" is, coincidentally, a Hindi term meaning "Truth" -- this is a very mainline romance, with the hero and heroine standing as idealized avatars of virtue. I do not know how this scheme has been applied to Cambodian cultural mores, but know that Sotha is a gentle, humble soul who only wants to love Phalla, who is nonetheless shamed by her paramour's former association with a dangerous biker gang, and falls into the arms of a conniving rich boy who speaks indecently to women and deals drugs on the side. Sotha sings, then, to remind his love of his enduring affections, even in the face of the sort of flighty, spunky Supporting Girl character I always, personally, tend to think is a better match for these guys, though their outspokenness can never quite compare to the demure glow of the down-home good girl heroine.

Everything turns out okay in the end, though mystery remains as to the state of international comics. The more I think I learn, the more there is to know. I presume you can try and hit up John P. for a little dose of your own, if you're so inclined.

The Library of American Comics Essentials Vol. 1: Baron Bean: The 328-page start of a new line of classic newspaper strip hardcovers, and what better artist to start with than George Herriman? Much of his non-Krazy Kat output remains somewhat obscure, though publisher IDW has vowed to collect the entirety of this 1916-19 replacement daily strip for The Dingbat Family (aka: the feature from which Krazy Kat spun off), an ex-nobleman/active bum scenario redolent (so I'm told) of Herriman's affection for wildly popular Chaplin movie comedies of the day. The reason it's gonna take several volumes is because IDW is putting it out one strip per page in 4.25" x 11" landscape format. Note that the Baron Bean installments of this series will not arrive sequentially - vol. 2 is already reserved for 1933 installments of Cliff Sterrett's Polly and Her Pals, while vol. 3 will concern a 1928-29 storyline from Sidney Smith's The Gumps; $19.99. 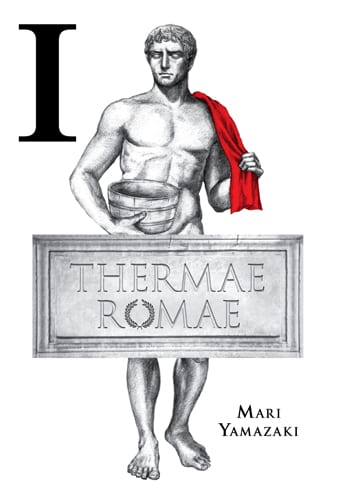 Thermae Romae Vol. 1: Certainly the big manga debut of the week, this is Yen Press' 368-page(!) oversized(!!) hardcover edition of one of those runaway hits on a topic that just piques the interest: baths. Specifically, Japanese public baths, as seen through the eyes of an ancient Roman architect shuttling back and forth through time for a bit of cultural cross-pollination. Created by Mari Yamazaki, the seinen series remains ongoing today, having recently released its fifth collected volume -- the Yen editions look to be compiling two Japanese books in each -- and seen itself adapted into a feature film that apparently grossed nearly $75 million in Japanese theaters. BATHS. Production info; $34.99.

Digestate: Mmmm, comics about baths and food. This is my kind of week. A Kickstarter campaign ran late last spring to fund this 250+ page collection of b&w comics related to eating and the many issues related thereto, and it's got a very interesting lineup; I don't recall Adam Hines of Duncan the Wonder Dog appearing in anything else since that big book dropped. Other contributors include Renée French, Noah Van Sciver, Alex Robinson, Jeffrey Brown, Brian Ralph, James Kochalka, Kieth Knight, Sam Henderson, Danny Hellman, Kevin Cannon, John Kerschbaum, K. Thor Jensen, Darryl Ayo Brathwaite, L. Nichols, Box Brown and others. The editor is J.T. Yost, of Birdcage Bottom Books; $19.95.

Tune Vol. 1: Vanishing Point: Your YA-ish choice for the week, a First Second collection of a webcomic by Derek Kirk Kim & Les McClaine, a sci-fi comedy about an underemployed young fellow trapped in an alien zoo; $16.99.

Edgar Allan Poe's The Conqueror Worm: You heard it here first, True Believer, and now the time has come to plunk down your sweet dollars for 32 pages of creepy comics adapted, drawn and colored by Richard Corben, as informed by the poem of the title. Note that Corben also has a shorter Poe adaptation (Shadow) in Dark Horse Presents #18 this week. Preview; $3.50.

Marked Man: Also hailing from Dark Horse Presents is this 72-page Howard Chaykin serial, bucking the trend of collecting that anthology's goods into comic book form by appearing as a 6 5/8" x 10 3/16" hardcover. A vain, aging career criminal is snapped into attentiveness by uncaring brutality of a connected political family - it's the kind of harsh-yet-easygoing genre scenario you tend to see a little more of in foreign comics traditions, though Chaykin's one of the few writer/artists serving 'em up at a regular clip in North America. Samples; $14.99.

Saturn Apartments Vol. 6 (of 7): Getting back to manga, Viz demonstrates some measure of dedication to its own seinen offerings, despite contractions in the market (one presumes) putting 'em mostly on the slow boat - don't expect the seventh and final installment until May 2013. I do like Hisae Iwaoka's art a good deal, so you know I'd flip through this. Other Viz offerings include: vol. 7 (of 11) for Mohiro Kitoh's raw nerve kids 'n giant robots opus Bokurano: Ours; vol. 13 (of 14, probably; maybe - I guess?) for Yoshiyuki Sadamoto's take on '90s raw nerve kids 'n giant robots urtext Neon Genesis Evangelion; and vol. 11 (of who knows) for Takehiko Inoue's ongoing wheelchair basketball series Real. Many choices; $12.99 (each, save for Eva, which is $9.99).

The Grand Duke: Random French stuff from Archaia #1 - a 144-page hardcover translation of a 2008-10 series by aviation art specialist Romain Hugault and longtime BD scriptwriter Yannick "Yann" le Pennetier. It's a love story between German and Russian pilots - I recall a Garth Ennis Battlefields storyline with Dynamite also dealing with the female Soviet "Night Witches" of the time. Preview; $24.95.

Last Days of an Immortal: Random French stuff from Archaia #2 - I also recall Boom! putting out a comic titled 7 Psychopaths a while back (no relation to the Martin McDonagh film). It was written by Fabien Vehlmann, currently the writer of perennial BD youth franchise Spirou et Fantasio. This is a more adult-oriented Vehlmann script, a 152-page album from 2010 with art by Gwen de Bonneval. An investigator with the "philosophical police" seeks to resolve an inter-species war by journeying to the heart of their centuries-old animosity. Preview; $24.95.

Nexus Omnibus Vol. 1: Man, did you know those fifty dollar Nexus hardcovers from Dark Horse are up to vol. 12? They're getting pretty close to compiling the entirety of Mike Baron's & Steve Rude's signature superhero/sci-fi series - one of the beloved indie genre comics from the '80s and beyond. That's good news for shy kids and bargain hunters, 'cause now the publisher is into the re-packaging phase, with the first two hardcovers stuffed into this one low(er)-cost softcover volume, 416 pages to kick off a whole line; $24.99.

Judge Dredd #1: Being the debut of the second attempt to turn the Hon. Joseph Dredd into a North American comic book mainstay, following a 1994-96 attempt by DC... around the last time a movie came and went, in fact. Some really decent talent involved with that old series; Andy Helfer, he of that terrific '87-'89 run on The Shadow, with Michael Avon Oeming and J.H. Williams III as succeeding primary artists. Still, everyone was either a bit green or off-balance - it's not well-remembered for a reason. Here's hoping writer Duane Swierczynski and artist Nelson Daniel have a better time of it, tracking events from the character's early career with IDW. They'll be aided by Paul Gulacy-drawn back-up, and some essay content by Douglas Wolk. Preview; $3.99.

The Batman/Judge Dredd Collection: Granted, there were other Dredd appearances in North American comics, most of which are compiled into this 304-page hardcover devoted to (title notwithstanding) all of the Law's self-contained crossovers with Batman and Lobo, characters often written by 2000 AD veteran Alan Grant, who scripts the various comics here in collaboration with Dredd co-creator John Wagner. Art by Simon Bisley, Glenn Fabry, Cam Kennedy, Val Semeiks and others; $29.99.

The Art of Todd McFarlane: The Devil's in the Details: Finally, we see a 400-page, Image-published hardcover showcase for the Spawn creator, notable for the fact that I can't recall seeing any art books for this like-it-or-not-generation-definer before, and I suspect the production will be pretty nice; $64.99.

CONFLICT OF INTEREST RESERVOIR: I do believe Castle Waiting Vol. II #18 wraps up the current storyline for Linda Medley's long-running fantasy comic, and with it my knowledge of the present state of the series; $3.95. 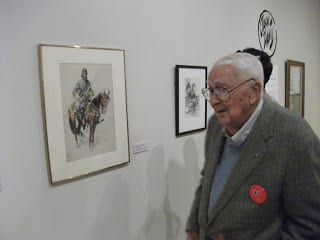 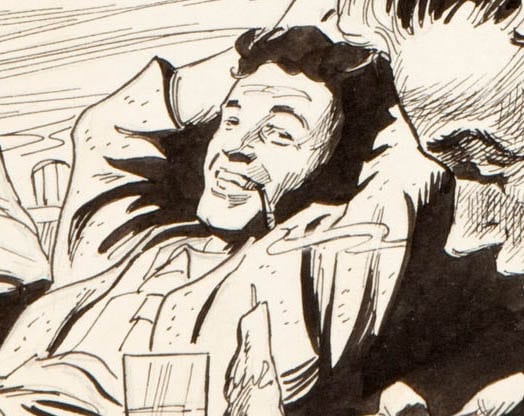