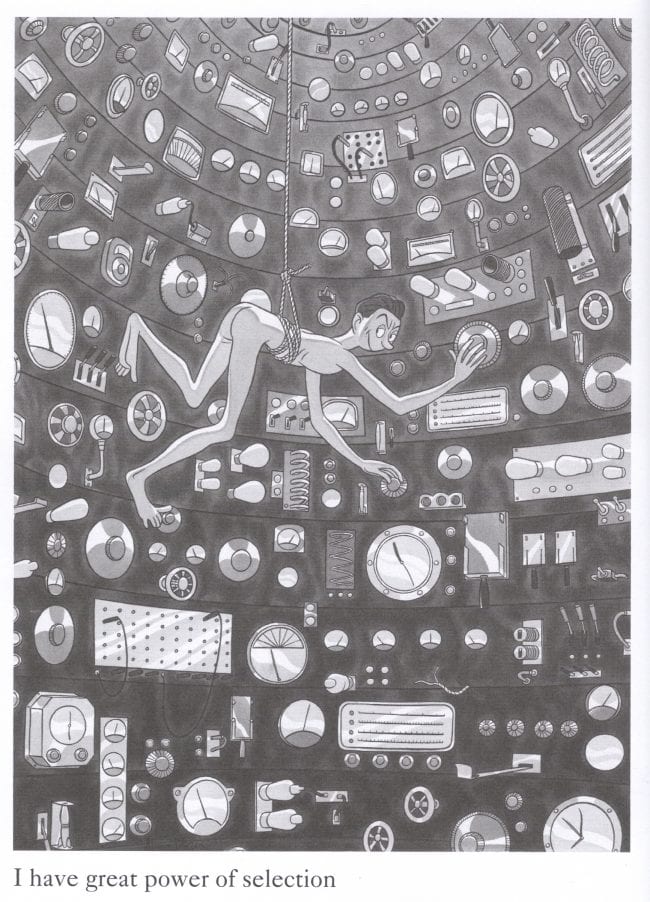 I don't know what Ken Parille was talking about; the only fundamental question surrounding Abner Dean is how can he get me so well? 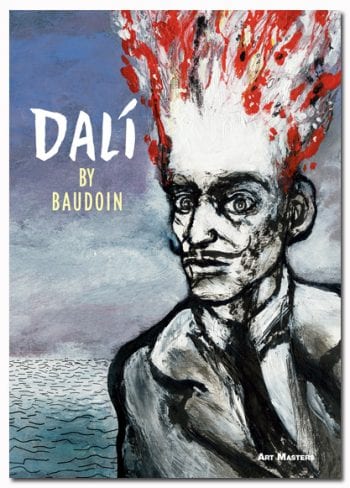 Dalí by Baudoin: Holy fucking shit, Edmond Baudoin in English. I guess last weekend's debate really did knock reality off its rails, because it is a rare thing indeed to encounter this titan of French artistic comics at the local Wednesday haunt. Most closely associated with the publishers Futuropolis and L'Association, Baudoin has nonetheless been all over the place in his decades of work - Dupuis, for instance, published this biographical piece in 2012. Presumably the sort of subject matter here is what's most appreciably salable on the current scene, though some of the books are good; I really enjoyed Chantal Montellier's Kafka book, which, as it happens, was also published by SelfMadeHero, the house at hand right now. If you like folks that can draw, this guy can draw. Distributed in North America via Abrams, 160 pages at 6.5" x 9.5"; $19.95. 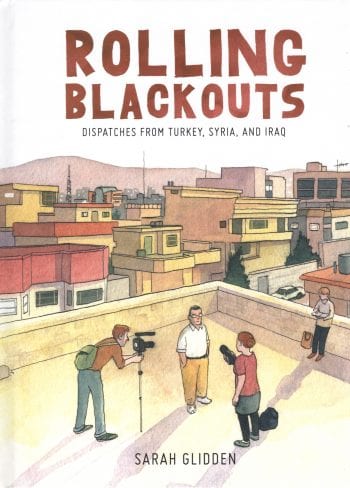 Rolling Blackouts: Being the week's big block of journalistic nonfiction, the sophomore graphic novel from Sarah Glidden of 2010's How to Understand Israel in 60 Days or Less. Subtitled "Dispatches from Turkey, Syria, and Iraq", the 304-page color work follows Glidden -- working in tight grids, warm watercolors, and dots 'n dashes cartoon figures -- as she accompanies researchers and others through encounters with Iraq War refugees in a variety of settings. I've heard praise brewing up around this one, a Drawn and Quarterly hardcover. Preview; $24.95.

Band for Life: A 250-page Fantagraphics print edition for this modular project from Anya Davidson, which began in 2014 as a webcomic at Vice.com. It's the chronicle of a noise band in a fantasy Chicago: "Though beset with disaster at every turn and frequently reduced to squabbling, they stick together because the band is the fulcrum of their otherwise confounding lives," declares the solicitation. Once a touring musician herself, Davidson has one of the more distinctive styles to emerge in the past 10 years (though her zine-making efforts go back longer), so large-scale works like this are welcome indeed; $29.99.

We All Wish for Deadly Force: An 88-page Retrofit/Big Planet collection of short comics from Leela Corman, culled from various print and digital venues. Often autobiographical, the pieces address topics ranging from personal trauma to the artist's work in bellydancing; $10.00.

What Am I Doing Here?: The latest in the hugely impressive debutante year of New York Review Comics - I am hard-pressed to come up with any nascent graphic novel line from an established book publisher that has exhibited a more varied and interesting sense of taste. This one's a hardcover reprint of a 1947 book by Abner Dean, a compendium of philosophical gag cartoons in which genitally smooth nude people engage in allegorical pursuits, accompanied by super-literal-yet-somehow-elusive textual statements (the book's title recurs throughout, in the manner of a refrain). Dean -- also a poet, commercial artist, Broadway set designer and patent-holding inventor -- put together several books of this type in the midcentury period. A contemporaneous appreciation by literary editor and television/radio host Clifton Fadiman is included in these 160 pages; $22.95.

Fuzz & Pluck: The Moolah Tree: Damn, Ted Stearn! This is a pretty lively week. Though an experienced director and storyboard artist for television animation, Stearn will be better known to some of you for his funny animal characters Fuzz (a mild teddy) and Pluck (a rude and nude rooster), who have appeared in one major Fantagraphics storyline per decade since the 1990s. This one was initially part of the anthology MOME, but now it's a 288-page b&w hardcover saga, filled with "[p]icaresque and often Swiftian absurdities," per the publisher; $29.99.

Ancestor: The Image anthology Island attracted some comparisons to '70s Heavy Metal early on, and few of its features brandished more applicable a blend of gruesome-satiric vision questing than "Ancestor", a four-part serial from Matt Sheean & Malachi Ward (penciller and inker respectively, both writers and colorists), though it probably falls closer to (say) Angus McKie than (say) Sergio Macedo in terms of genre literalism. In a world where apps and searches can be run at the speed of thought, a group of people go off the grid at the estate of an ambitious eccentric with plans to force a more holistic evolution of humankind. This 120-page softcover collects the whole story; $14.99.

Shigeru Mizuki's Kitaro Vol. 2: Kitaro Meets Nurarihyon: God damn it, Kitaro, I thought you were hanging out with me. Nonetheless, your manga pick of the week remains this second-in-the-present-series(-&-third-overall) Drawn and Quarterly release of classic supernatural manga by the late, great Mizuki. If it's anything like the prior installment, expect its 192 pages to be augmented by historical information and yōkai lore from translator Zack Davisson, along with kid-friendly games and puzzles; $12.95.

Super Mario Adventures: Another vintage manga specimen, though its provenance is quite different. If you've had any history with the video game propaganda apparatus Nintendo Power, you've probably at least heard about this 1992-93 all-color serial, scripted by Kentarō Takekuma of the classic Japanese comics industry satire Even a Monkey Can Draw Manga. Many humorous scenarios are concocted for the Brooklyn mustache all-star and his turtle/dinosaur/spore-bearing crew (and Luigi), drawn with delightful cartoon facility by "Charlie Nozawa", aka Tamakichi Sakura, a humorist and gaming character designer who's also published a good deal of work in the 'alternative'-type magazine Comic Beam. Well-remembered for its unusually spunky characterization of archetypically distressed damsel Princess Peach/Toadstool, and its adroit sewing of ad hoc Mario lore into a compelling environment, if that kind of stuff interests you. And it does. You saw that guy break the speedrun record last week and thought "humanity is not in the twilight of progress." Me too. A VIZ release, 112 pages; $14.99.

Tetris: The Games People Play: Also in gaming-related comics, Box Brown follows up his 2014 release Andre the Giant: Life and Legend with another original graphic novel for First Second, now concerning the story behind the creation and proliferation of Alexey Pajitnov's 1980s brainchild, possibly the most widely-played video game in human history. It's a good story too, thick with Cold War diplomacy and clandestine deals, yet amenable to all sorts of digressions as to the mechanics of game design and the impression of play, owing to the simple-yet-infinite nature of the program's puzzle makeup. A two-color presentation, 256 pages in softcover; $19.99.

The DC Universe by Neil Gaiman (&) Neil Gaiman's Troll Bridge: Two here from the enduringly popular Gaiman, representing different periods of his career as a writer. DC Universe covers works explicitly scripted by him, specifically DC superhero comics. Indeed, there's an early Bernie Mireault/Matt Wagner-drawn Riddler story in here (from Secret Origins Special #1, 1989) that helped build Gaiman's reputation as an agile thinker about genre with a knack for the poignant. The collection continues up to 2009, with a Mike & Laura Allred Metamorpho collaboration from the Wednesday Comics anthology, and a long, soggy Andy Kubert/Scott Williams Batman/Detective Comics two-parter. Troll Bridge, meanwhile, sees comics-friendly Gaiman as a prose source for comics adaptation, with the name value to attract expert talents. Colleen Doran -- no stranger to Gaiman -- handles these 64 color pages, drawn from a 1993 story and presented as a 6.5" x 10" Dark Horse hardcover; $29.99 (DC), $14.99 (Troll).

Si Lewen's Parade: An Artist's Odyssey: Finally, your comic-as-unusual-object of the week comes from Abrams and editor Art Spiegelman, mounting a 1957 work by Polish-born and NYC-based artist Si Lewen, who died this past July, as an 11" x 8" accordion book - one side presenting a sequential suite of martial marches, both victorious and lethal, with the reverse offering illustrated text covering the artist's body of work. There should be 148 relevant sides in total, with a slipcase to house the package; $40.00.

The thumbnail image on the front page this week is a detail from a digital picture I took of a dog. That's the long and short of it. No wearisome elaboration necessary. Signed photographic prints of the full image will be available at CXC this weekend for ten thousand dollars. 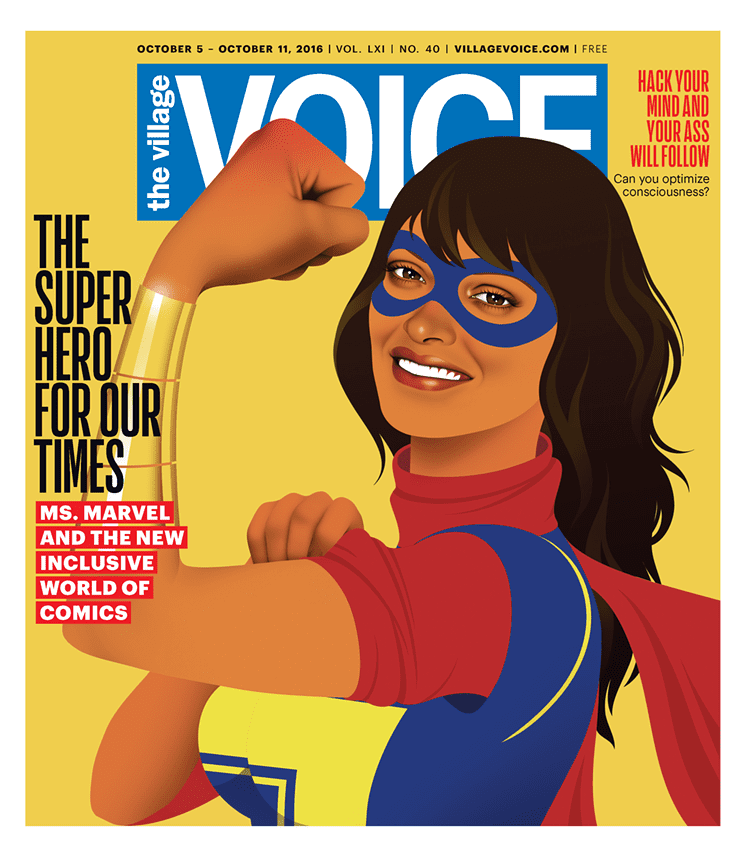 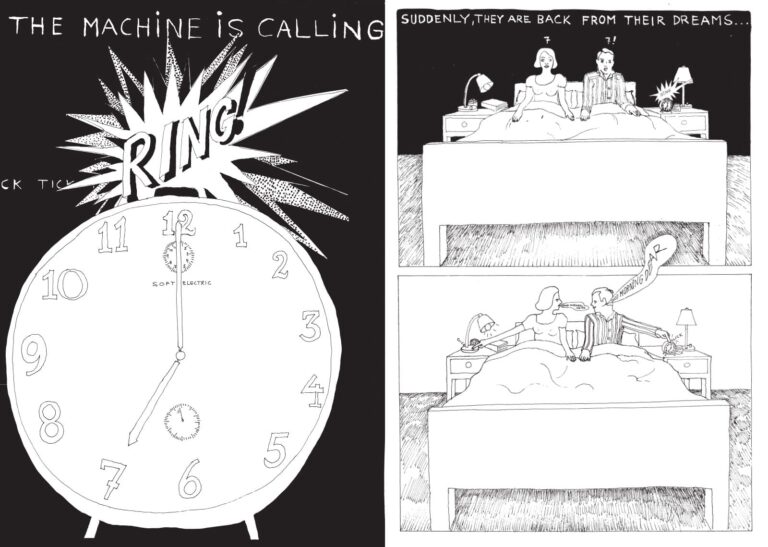