The other night I told my mom she's "not missing anything" by not joining Instagram. Here it is, barely two days later, and I put together the most 'Gram-heavy "This Week's Links" yet. Reader, I can tell you're aghast, and you should be. Ma Flandy deserves the same access to boomeranged selfies and screenshotted text messages as everyone else. What kind of son am I to soft-pedal these pleasures? If you talk to her, please let her know I realize what a fool I've been, and I'm sorry.

Flashing back to the week that’s been...

• Liza Donnelly did some live-drawing of the New York City Marathon...WHILE RUNNING THE MARATHON.

• David Bowie is getting a graphic novel bio, and Michael Allred is drawing it.

• Wisconsin Public Radio got into the weeds with Craig Thompson's Gingseng Roots. (I simply can not help it, I am sorry.)

• How great is Sophie Franz? How does she only have 1,300 IG followers while quaint little four-panelers packed with pseudo-self-affirming claptrap get hearted by the millions? How can we rectify this? How funny is this drawing:

• I'm a little late on this, but SHEESH I didn't know: Ringling College in Sarasota, Florida is currently holding an exhibit of the work of master illustrator Jack Davis.

• It's the Galway Cartoon Festival this weekend!

• Here! At TCJ! A recap of Hamburg's Comicfestival.

• Peter Kuper created a comic about Joseph Conrad's Heart of Darkness (which Peter has just adapted into graphic novel form) for the paper of record.

• Big-time comics logo-maker Rian Hughes put out a book of his work last year. I always wondered what it looked like inside, and then Hughes himself linked to this video of someone flipping through it. It looks like a fine thing! The video is kinda ASMR-y, though, so if you're like me, you're flying for the mute button:

• It's the one year anniversary of Cartoonist Kayfabe! To celebrate, hosts Ed Piskor and Jim Rugg had a live-streaming show, part one of which can be seen here. (Part two and three are right behind. You know how YouTube works!) I think Ed is wearing a shirt featuring a Drew Friedman drawing of Tor Johnson, which is something I'd like to own.

• Also on CK: a look at wordless comics. Being able to successfully pantomime is about as pure as cartooning can be.

• Someday, if you get a regular feature on TCJ, you can choose to not feature Arthur Adams' inking process for a drawing of the New Mutants' Warlock  — but now ain't then, bud. This is my time!

• PopMatters: Hans Rollman on Yoshiharu Tsuge's The Man Without Talent

• As always, Multiversity has some of the week's big Wednesday releases: Alexander Jones on Brian Michael Bendis and Ryan Sook's Legion of Super-Heroes #1, Rowan Grover on a-lot-of-people's Undiscovered Country #1

• At TCJ: Eddie Campbell on Paul Tumey's Screwball! The Cartoonists Who Made the Funnies Funny, Noah Berlatsky on G. Willow Wilson and Cary Nord's Wonder Woman: The Just War, Leonard Pierce on This is What Democracy Looks Like, and Keith Silva on Tze Chun and Artyom Trakhanov's The 7 Deadly Sins

• Popular Science recommends some sci-fi graphic novels with a subhead that reads "When was the last time you stayed up all night reading a comic book?" [Insert crying-laughing  emoji here.] So this isn't really for us, but they included Charles Burns and Tillie Walden, so I thought you'd like to know.

• Relevant to my interests and geography: Michael DeForge is sneaking up on New York City:

i'm doing a reading at Desert Island in Brooklyn in one week! i'll sign books surprise it's November 12 SURPRISE come listen to me read some unpublished comics pic.twitter.com/2A5nqAxBlX

• Also technically relevant to my interests, though I have never and probably will never buy one of these (unless Anthrax makes one, and I'm shocked they haven't): metal bands who infiltrated comic books.

• The “Limited 4K UHD Collector’s Edition” of Quentin Tarantino's Once Upon A Time In Hollywood will contain a mini MAD Magazine, featuring a Tom Richmond-illustrated parody of the fictional TV show featured in the movie.

• Matt Lesniewski is (was?) taking commissions, which I feel is more of a public service to TWL readers than a shill for Matt. I like these, do you like these, let's like these together.

• Writer Sam Humphries on the Off Panel podcast

• And on the Behind the Panel video series: writer Cecil Castellucci and artist Lee Bermejo

• At The Beat: writer Ann Nocenti and Diary of a Wimpy Kid's Jeff Kinney

• On Instagram, Eleanor Davis provided a peek into her process for her recently-released The Hard Tomorrow, including scripts and sketches:

• The New Yorker has some gorgeous preview pages of Lynda Barry's Making Comics. And The Paris Review has a few more. Save some for those of us who are gonna buy the actual book!

• PW posted a bunch of photos from last weekend's Comic Arts Brooklyn festival. I'm in there! Can you find Flanders?

• Asterix isn't about to miss out on that sweet stateside action, either, as Papercutz is going big on the Gaul.

I'm getting the sense this weekend will be best entered with a hearty helping of Ruben Bolling's "Super-Fun-Pak Comix" sticking to our collective ribs. Thankfully, Mr. Bolling foresaw this need. Check out the latest bunch of fun below, and don't stop swiping until you've seen "The New Yorker Cinematic Universe."

Ta-ta and toodles to yez! 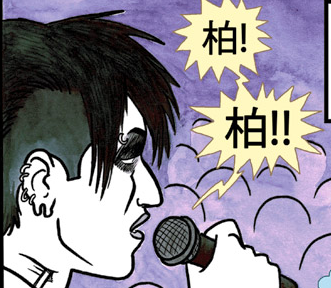