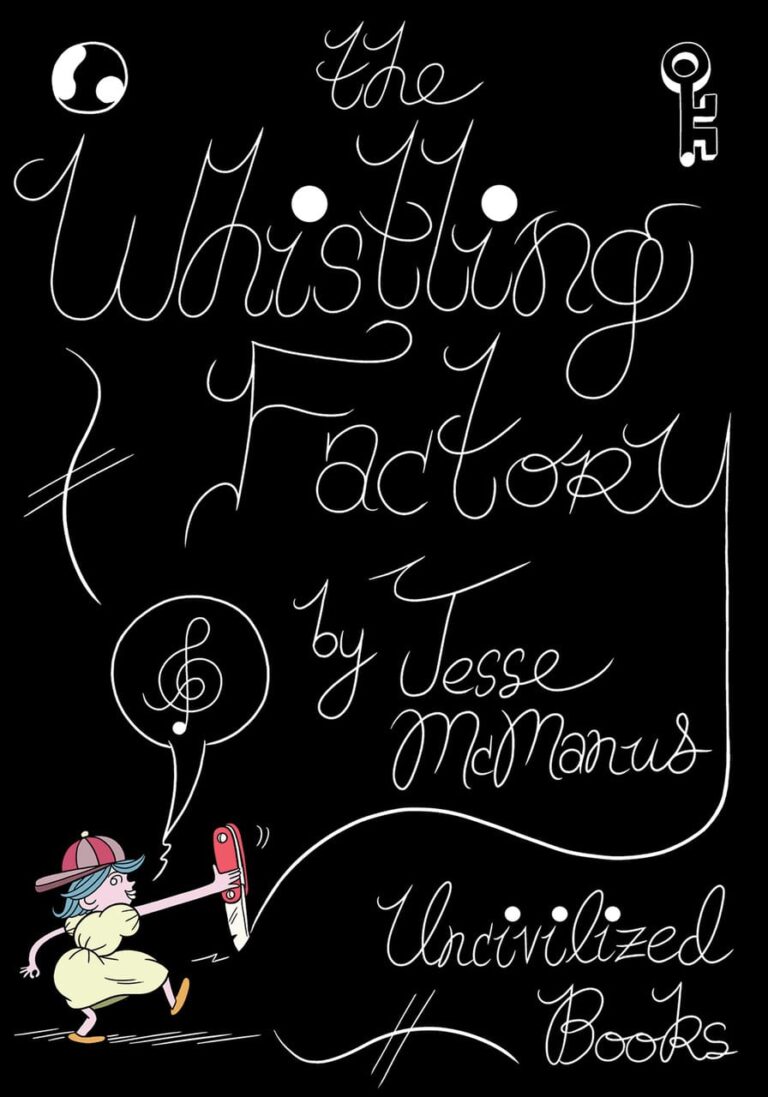 Jesse McManus comics are like a fever dream. That is, they are at once grotesque and lucid, operating with a world that exists in the coherent (if disorienting) shadow of our own. Combing the cutesy-macabre aesthetic of Al Columbia with the frenetic grotesquerie of a Ren & Stimpy close-up, The Whistling Factory is no different. Composed of stories of varying lengths, and brief, punchy interstices, the collection resists the coherence of something like a short story cycle without diffusing into the incoherence of the anthology format. Generically, it rejects comporting with anything that might be familiar, but it isn’t so scattershot that it cannot be encountered as a unified thing.

Some critics have failed to negotiate the nuance with which McManus interlinks his stories. For example: In a cursory review, Publishers Weekly (as their authors are anonymous) described the book as “loosely connected only by their own warped sense of logic.” But the work functions at all, which indicates that it functions. That is to say, McManus doesn’t warp a “sense of logic” that precedes him or precedes the work. But rather, he composes a logic that coheres internally within The Whistling Factory. At the top of this review, I described the book as a “fever dream.” There are two parts to this description—both “fever” and “dream”—that each serve a crucial function. First, like a dream (or like the films of David Lynch, the novels of Kobo Abe, certain comics by Olivier Schrauwen) there is a logic which is consistent within the dream/work. Details of the work may appear out of place, because they resist the way that things in the world tend to be ordered, but if we come to understand the unique way in which the dream organizes itself, these details come to seem less and less out of place. Secondly, “fever” describes what most readers would call “the weirdness” of McManus’ work. All the visual confusion, the inky viscera, the frenetic disregard for continuity or contiguity, and other qualities are contained within this descriptor. Rather than disregarding McManus work as illogical—treating it as something that cannot be taken seriously in the way we take a Chris Ware seriously—we need to accept the terms the book itself lays out.

Taking the book seriously, however, does not require us to understand every detail of it. For example, throughout the book characters—or at least, versions of characters who bare more than a passing resemblance to one another—recurring, appearing in stories, or episodes, that seem to lack any sense of cohesion or continuity. What’s more, vignettes which appear later in the book (most of them are untitled) appear to pick up and elaborate on shorter, more preliminary versions of stories, which appear towards the book’s beginning. Because McManus’ are comics of omission—plot details, character names, chapter or story titles are often absent—it is unclear what the relationship between these two things is. The relationship may be merely superficial, but the figures and scenarios of disparate parts of The Whistling Factory convincingly relate to one another in some way. And it is that uncanny connection, that relationship that is too vague to articulate, that urges the reader on. 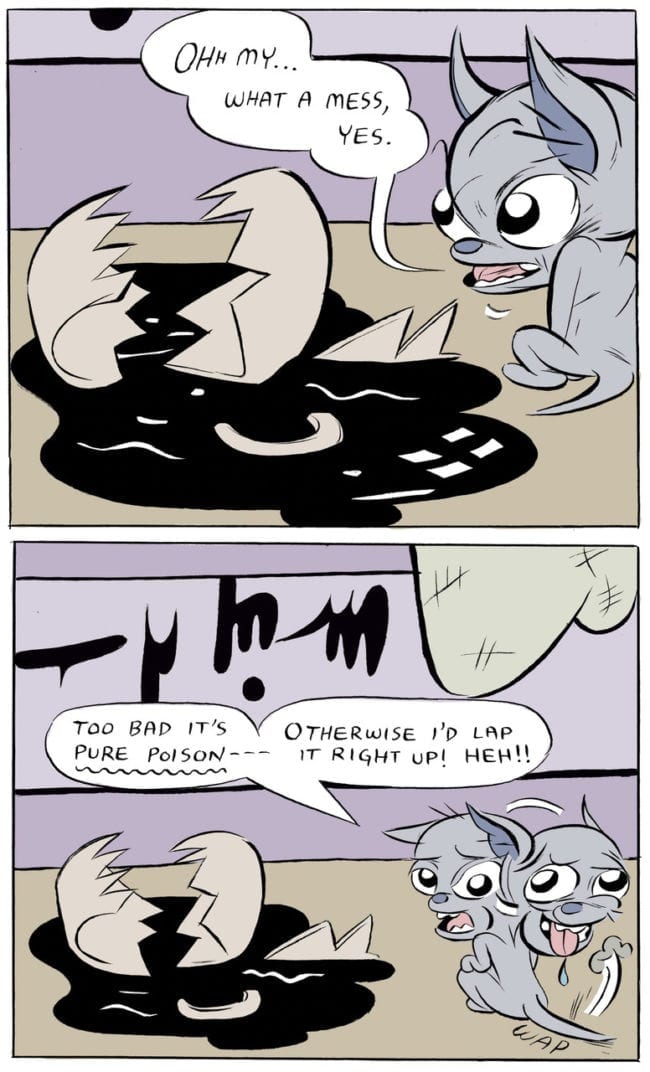 Admittedly, the book does give its readers a little resistance. Vignettes, or what might be better described as “incidents,” careen into one another, with the only indication that the scene has changed being the aesthetic changes—differences in line weight, page layout, panel-border thickness that signal the start of a new work. As a whole, the book lurches into and out of incidents with reckless abandon, which makes it difficult to demarcate and organize in your mind. Events and figures blur into another, and it’s easy to quickly become lost, asking yourself “What did I miss?” This is symptomatic of McManus cartooning, as well, and—at least in the black and white sections that compromise roughly half of the book—action can be difficult to parse out. Black globules of ink vie with one another for your attention, often obscuring the white spaces that delimit and distinguish those substantive, opaque spaces. Likewise, his figures have the anatomy of a Tex Avery character, and they extend, twist, and entangle their bodies with themselves and with their surroundings, often, because of the heavy blacks that blur into another, losing themselves in themselves. If McManus’ drawing can be said to be grotesque, it is so in these moments when bodies do what our minds tell us they should not be capable.

None of this is to McManus’ derision, however. His cartooning has a kind of compulsion to it, which is part and parcel of this grotesquerie. It wears a paper mask of Carl Barks’ comics over its face, in place of its face, making an appeal to nostalgia that is as sordid and disturbing as it is genuine. The world of childhood is here rendered as something not-quite-right, something that looks like reality only disordered and disturbed. Here, mutilation is treated the same way as Will-E-Coyote’s flattened body—same shit, different day, man. Bodies are treated like plaything. Time and space are dispensed with completely. 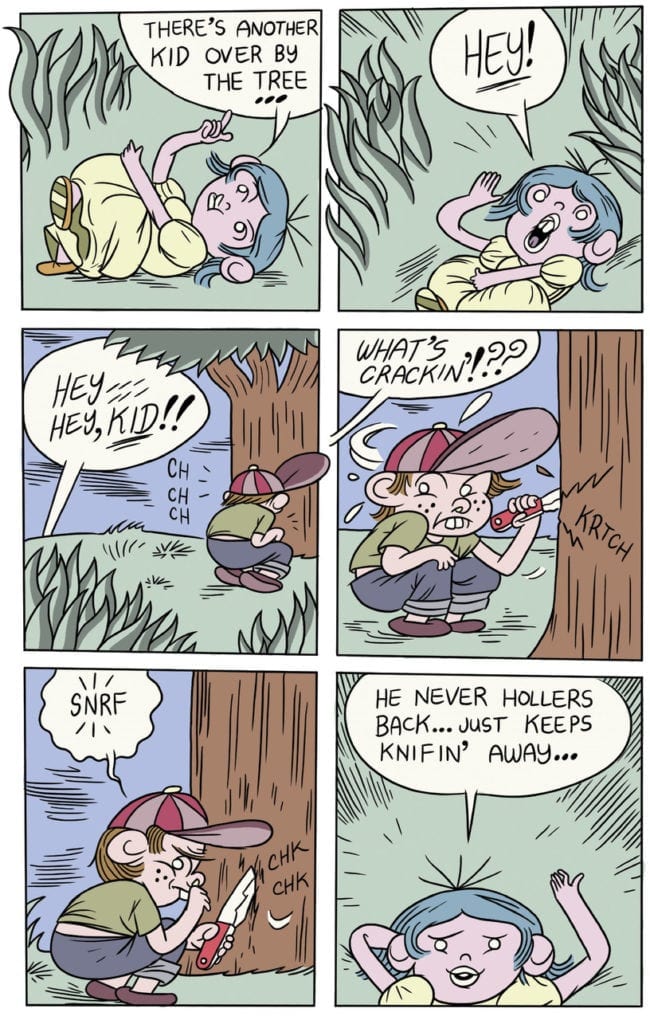 I can’t quite claim to have figured these comics out—at least, not in the sense where I would be expected to account for all the details of the comic. I’m not convinced such an account is possible. The book is defined by its pockmarked discontinuities and disturbances, its absences, avoidances, and alienations. It is a book where something isn’t quite right, where things cannot be made whole. McManus opens his book with a one page comic explaining the origins of “the whistling factory” of the title (unclear if it’s a true story or not): as a child, McManus was disturbed by a garbage processing plant, but his dad told him it was a whistling factory, something whose sole purpose is to lull McManus to sleep. This—a dream world fueled by toxic fumes and sewage sludge—is the perfect description of the book itself. 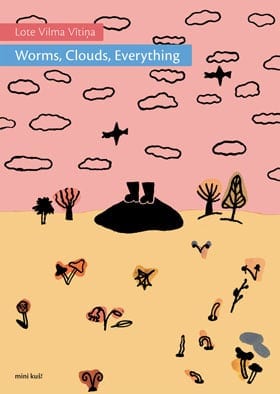 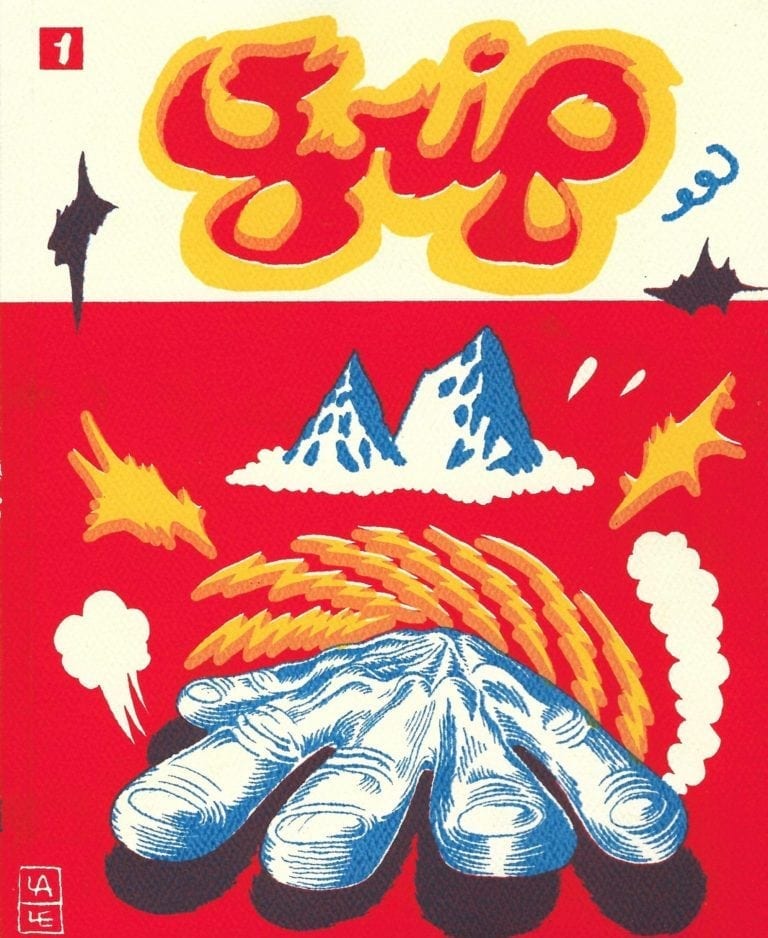