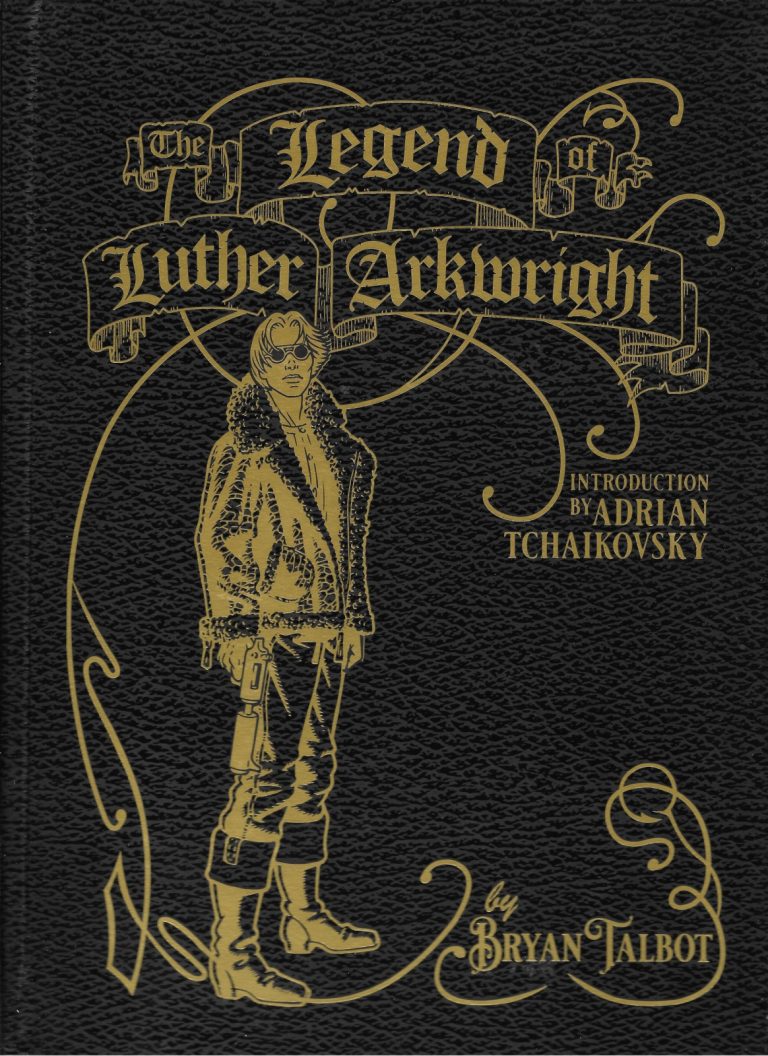 EDITOR'S NOTE: This Jonathan Cape edition of The Legend of Luther Arkwright is available in the UK and through import sources. A North American-specific edition from Dark Horse is presently scheduled for March of 2023.

Luther Arkwright doesn't resemble Bryan Talbot as much as he used to. Not on the outside, anyway. The Legend of Luther Arkwright arrives 23 years after the character's previous series, Heart of Empire, or the Legacy of Luther Arkwright; 33 years after his first story, The Adventures of Luther Arkwright, finished its protracted serial publication; and nearly 46 since the parallel-world-hopping adventurer first appeared in the UK underground press. By the miracle of cartooning Luther has remained as spry as he ever was, while time has done its work on his creator and the rest of us. Talbot is a political artist, responsible either alone or with his wife, Mary M. Talbot, for several committed leftist comics, plus in Luther Arkwright a character with a high altitude perspective on the long arc of the moral universe. But the titles of the books in the Luther Arkwright saga tell their own story about the arc of the activist over decades: adventures, then legacy, then legend, and not necessarily victory. 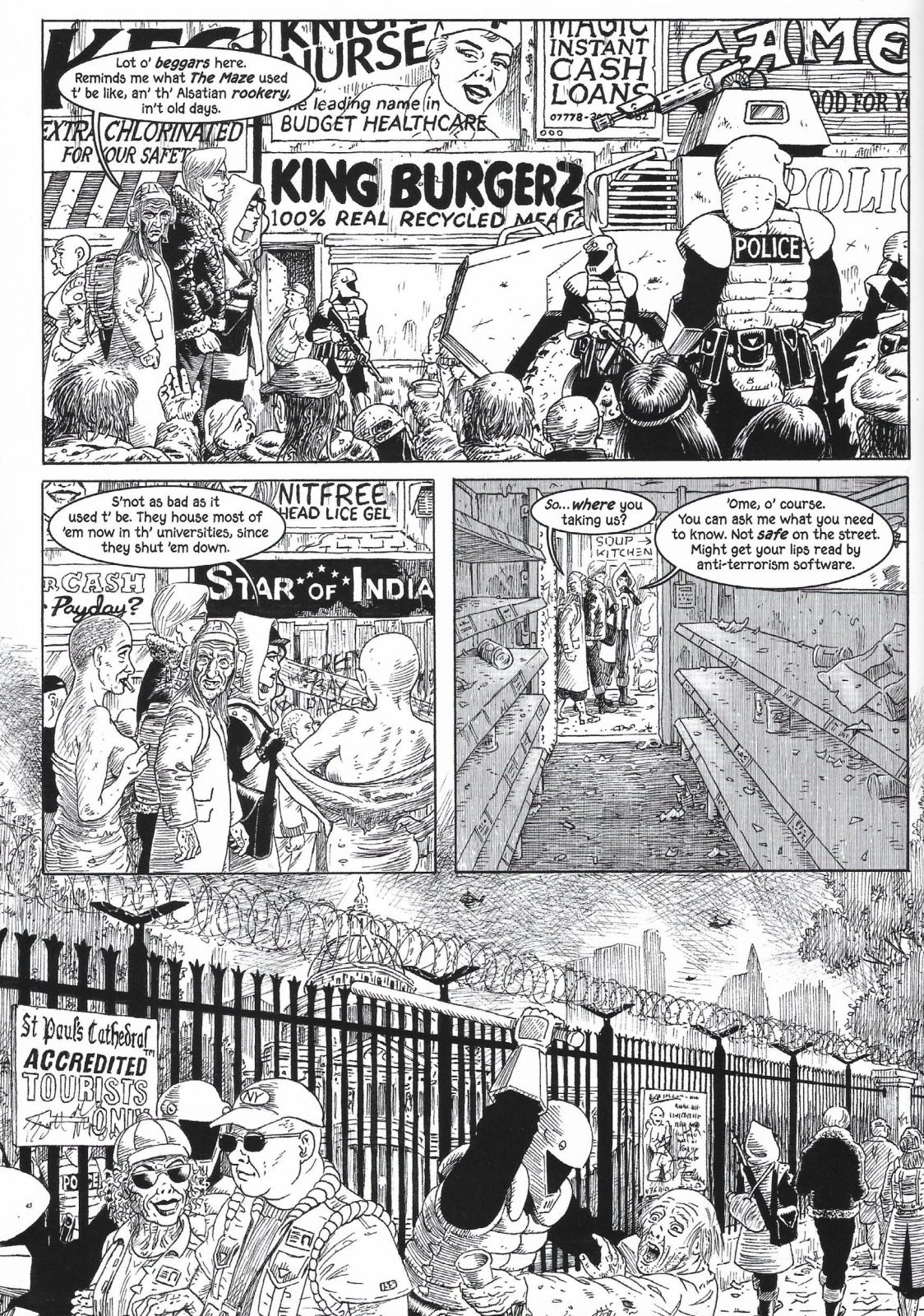 Legend comes appropriately packaged, a large-format hardback book between textured black covers bearing ornate gold typography, like a message from history. As with 2007's Alice in Sunderland, also published by Jonathan Cape in a similar hefty format, the book aims to be a tome rather than a samizdat, and inside it Talbot applies a third distinct art style to the Luther Arkwright saga. The original Adventures looked like the artist was on fire, black and white pages filled to capacity with detailed inking, montage, lighting effects, text blocks and esoteric philosophy: the work of a man enthralled by the films of Nicolas Roeg, and a challenge to anyone clawing up the rock face of the story's complexities. Legacy was the widescreen Hollywood sequel, bold and colorful and direct, the plot simplified into the search for a secret while an atomic bomb ticked down to zero. And now Legend returns to b&w, but on glossy modern paper and in a fine feathery ink line that makes the blondest of the many blondes in the story–like Luther himself–sometimes seem to be soaking back into the page.

Talbot confronts his creation with the fabulous new. Previous books had Arkwright as the next step in evolution, homo novus, a warrior-philosopher who had shed the clutter of ego; but within the first few pages of Legend he encounters Proteus, whose telepathic and dimension-hopping powers dwarf even Luther's. Proteus is a very X-Men name for a very X-Men villain, an emergent homo eximia who thinks homo sapiens are no better than slaves or vermin, to be culled without hesitation. Holed up in a forested compound with worshipful followers having sex with each other, as per the cult leader playbook, Proteus rattles off a familiar roll call of mankind's violent failings and tells Luther that the infestation has got to go. Bald, big-eyed and androgynous–while characters do pause to consider Proteus's pronouns, it's not clear what the androgyny brings beyond an ambivalent shade of the current–Proteus takes Luther's disagreement as the start of a war. 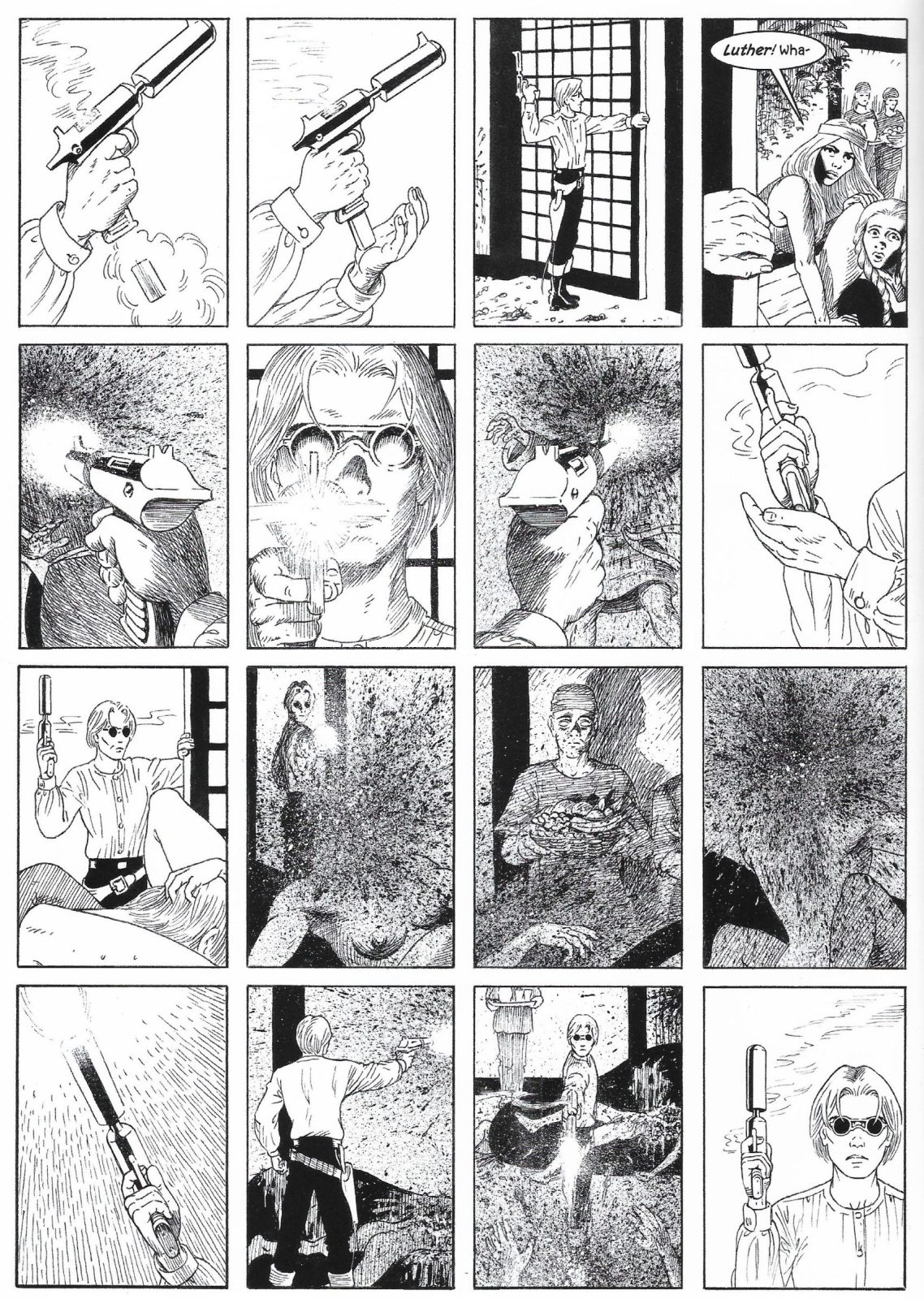 In earlier books, Luther's allies on the central dimension designated 00.00.00 (the labels Talbot created back in the 1970s now read like IP addresses) stood in for readers monitoring the story, until it invariably burst its banks and overwhelmed them too. This time Talbot leans explicitly into how stories are told and messages are mediated. Legend is itself framed as a story told in some far-flung future by a Scheherazade figure to a curmudgeonly listener, whose gripes about the storyteller's pace and choice of tale won't surprise anyone who read Alice in Sunderland, where this kind of thing happened all the time. Elsewhere in the narrative, the child of two characters from Legacy addresses the reader directly while recording an explanatory diary on video, mostly to explain what happened in the earlier comics; this is not the only educational sidebar that Talbot, reflecting perhaps an older radical's pedagogy, includes in the book. While the original series dug at length into a British revolutionary war won through combat, the key action in Legend is a TV broadcast and a call for political struggle. All this is, again and clearly, about a Britain - one where the people "voted for isolationism... manipulated by their rich establishment and its right wing media," according to the homo novus twit running the place in one dire parallel.

A multiverse before the term caught on, Luther Arkwright's parallel Earths have always caused the same queasy discomfort that all multiverses do, saying that a better world isn't something you make where you are but somewhere you eject to, new lives for old. After an outbreak of optimism in Legacy, i.e. in 1999, the new book returns to a darker modern view of the likelihood of any change for the better, and about the circular methods involved in getting one jump-started. Legend is a comic of frequent slaughter, the death count substantial, bodies and brains splashing across the pages; and while his allies handle the revolution, enlightened Luther Arkwright takes care of the killing. The man of violence, having renounced it more than once already, embraces it again without hesitation, déjà vu. 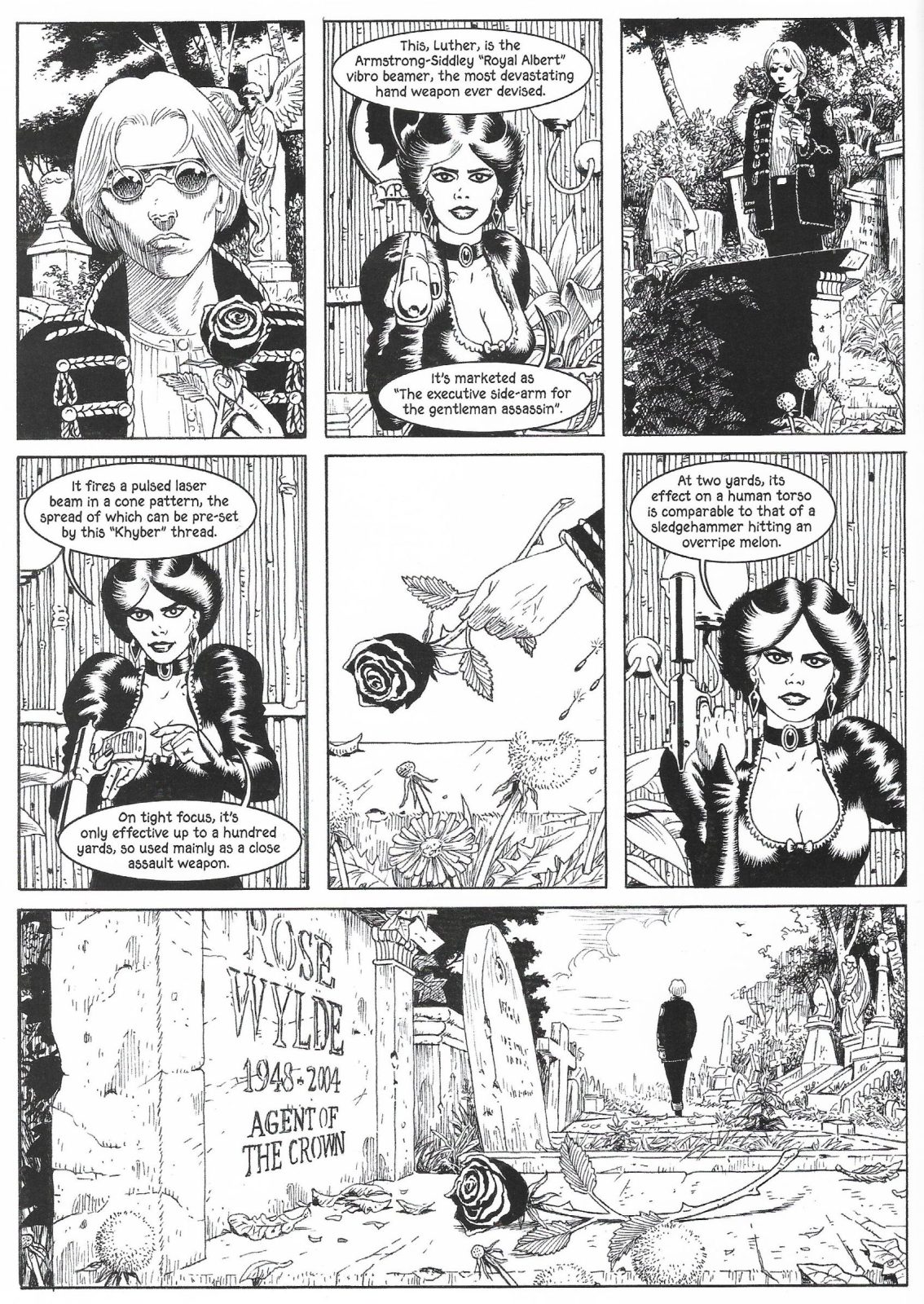 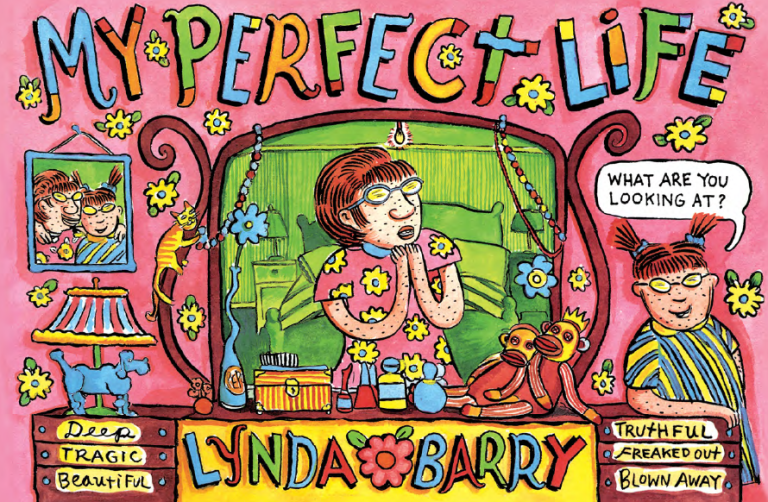 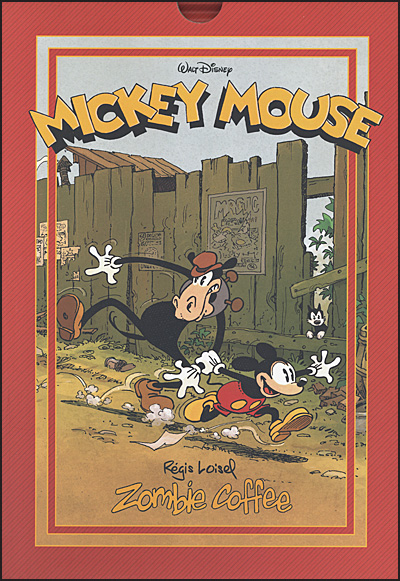