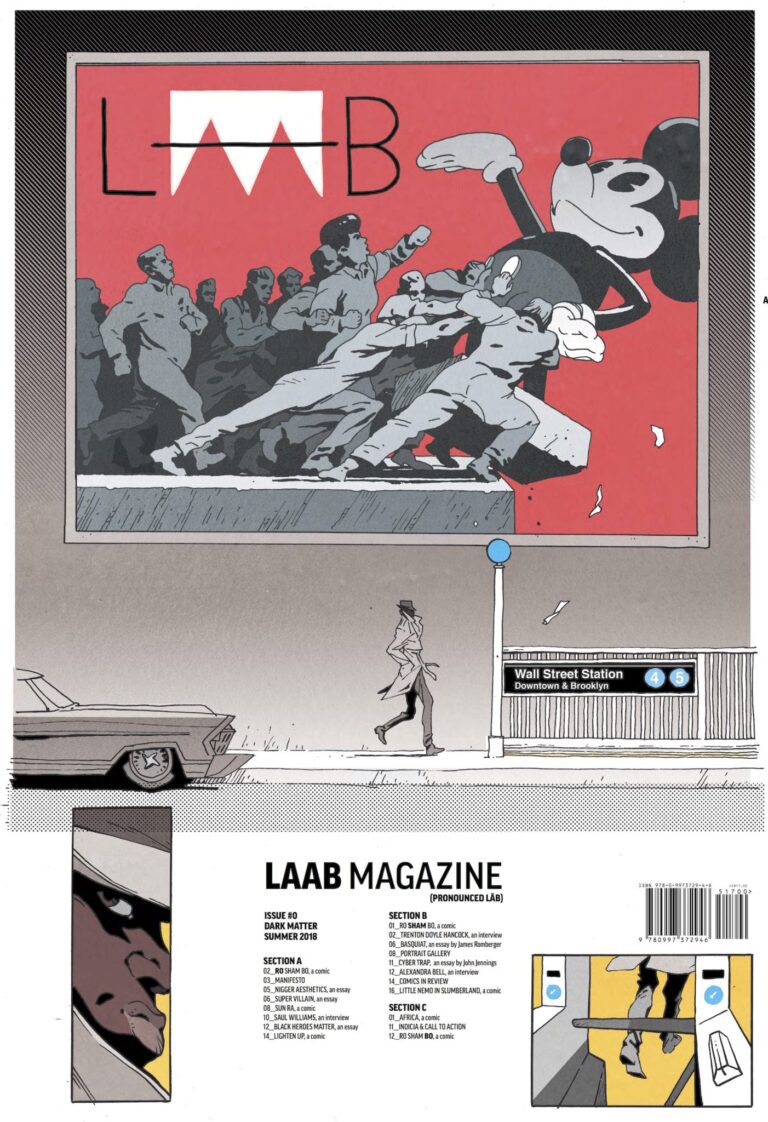 In the canon of the Western cultural consciousness, the black body and its attendant meanings have historically been portrayed as an afterthought, if at all. The salient fact of their humanity often begrudged, people of color had been, and in many cases continue to be depicted with such an attitude of peripherality and disdain as to be rendered all but invisible. Hell, Ralph Ellison's 1953 novel Invisible Man spells it out right in the title. Or, to put it another way, in the sage words of Kamaal "Q-Tip" Fareed, "There ain't a space program for niggas/ Yeah, you stuck here, nigga (move on to the stars)." This refrain, the titular hook off “The Space Program”, the opening track of A Tribe Called Quest’s sixth and final album, We Got it from Here… Thank You 4 Your Service, functions as both warning and rallying cry to the observant listener, cautioning them of the inherent precarity of possessing a black body in a future designed in service to the capricious whims of faceless corporate oligarchs, all the while evoking them to nonetheless “move on to the stars” and “make something happen.” These words coursed through my mind like a charge along a circuit while I pored across the pages of LAAB #0.

Subtitled “Dark Matter,” the inaugural issue of this publication from comic artist Ronald Wimberly (Prince of Cats, Black History in Its Own Word) and Philadelphia-based publisher Beehive Books explores the concept of mythological blackness and the aesthetic role of the black body within the sphere of popular culture, particularly that of science fiction. “The theme of the first issue of LAAB is the dark matter that makes up society,” said Wimberly in an interview with Comic Book Resources. “Identity; Class; Race; Gender; Religion; Sexuality — the countless badges and markers we wear as we move through life. The ones that we choose and the ones that are chosen for us. The unspoken social power dynamics that underlie virtually every human interaction. The structures we navigate.”

As an aesthetic and commercial object, LAAB is one of the most conceptually intriguing and idiosyncratic comic publications of the year. A forty-four page, 23" x 32" broadsheet divided in three sections, comprised of a total of eight long-form essays and interviews illuminated by short-form comics and illustrations by Wimberly himself, LAAB reads like an immaculate alt-history artifact plucked from some adjacent pocket of the multiverse where Emory Douglas became the art director for the New York Times and W.E.B. DuBois pursued a career in science fiction. Maëlle Doliveux’s layouts and typographic design bring the incendiary erudition of LAAB’s pieces into a clear totality of form, a sum of many parts working in concert to pose bold propositions and even bolder calls to action and reform. 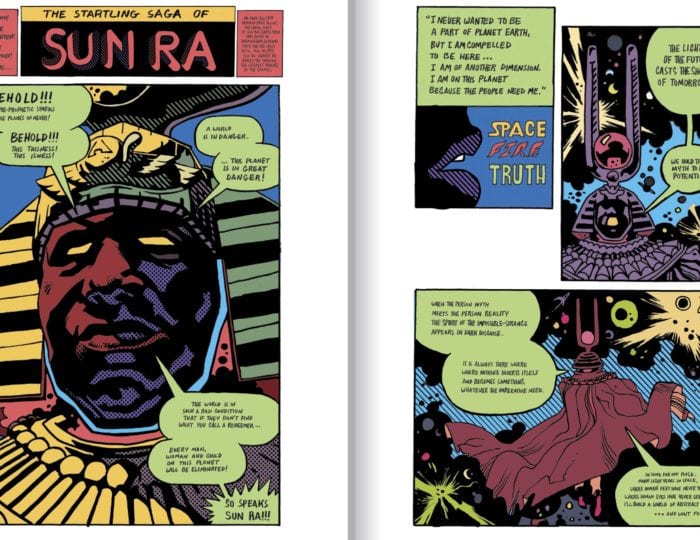 As a sequential media text, LAAB is a narrative of sorts, though not framed around the actions of any one fictitious character, but rather a discourse centered on the sordid history of an aesthetic entrenched within the complementary forces of racial capitalism, heteropatriarchy, and white supremacy. Per the issue’s opening essay, Wimberly cites theoretician Walter Benjamin’s 1935 essay "Art in the Age of Mechanical Reproduction" to outline how the anti-semitic caricatures created by the Führer cult to lull the German populace into stupefying docility during WWII were preceded nearly 200 years by the racial capitalist aesthetics of Thomas “Dartmouth” Rice’s Jim Crow character, the archetype of what Wimberly calls “the Nigger Aesthetic.” As he describes it, the Nigger Aesthetic refers to the "representation of the Black body, Black life and the corresponding way of seeing and thinking about the Black body, as informed by white supremacy’s stigmatization of the Black body and Black life.” Wimberly proposes that, in order to meet and nullify this pernicious strain of systemic defacement, artists must consciously prefigure the black body and its ontological history within the Western cultural imagination at the forefront of attention so as to eclipse the dangers posed through the tacitly unconscious consumption of these aesthetics. “I believe the presence of Black personhood itself erodes the lie of white supremacist aesthetics.” Wimberly writes. “The juxtaposition of the Black body and its inherent personhood with the reductive Nigger Aesthetics activates a political subjectivity. Like seeing, touching, smelling a human body vs. seeing a drawing of a human body. The presence of the body and its personhood is a material anchor to reality and therefore acknowledges the aesthetics and the political constructs relative to that reality.”

The rhetorical tone and eloquence of “Nigger Aesthetics” is a guiding vector for the entirety of LAAB #0, informing the discursive trajectory of the issue’s later contributions. Whether it’s interviews with multidisciplinary artists like Saul Williams, Trenton Doyle Hancock, and Alexandra Bell, or essays by cartoonist James Romberger and author John Jennings, LAAB #0 is packed with deftly written exegeses on the potentiality of supervillains as catalysts for ideological discourse, the commercial misappropriation of Jean-Michel Basquiat’s legacy, and the role of the mass news media in the hegemonic construction of the so-called “Other.” One of the issue’s most fascinating additions is John Jenning’s “Impossible Attractions: Planet Deep South and the Origins of Cyber Trap”, wherein he presses a compelling argument for the American South as the nascent fertile crescent for an new emerging form of cyberpunk. 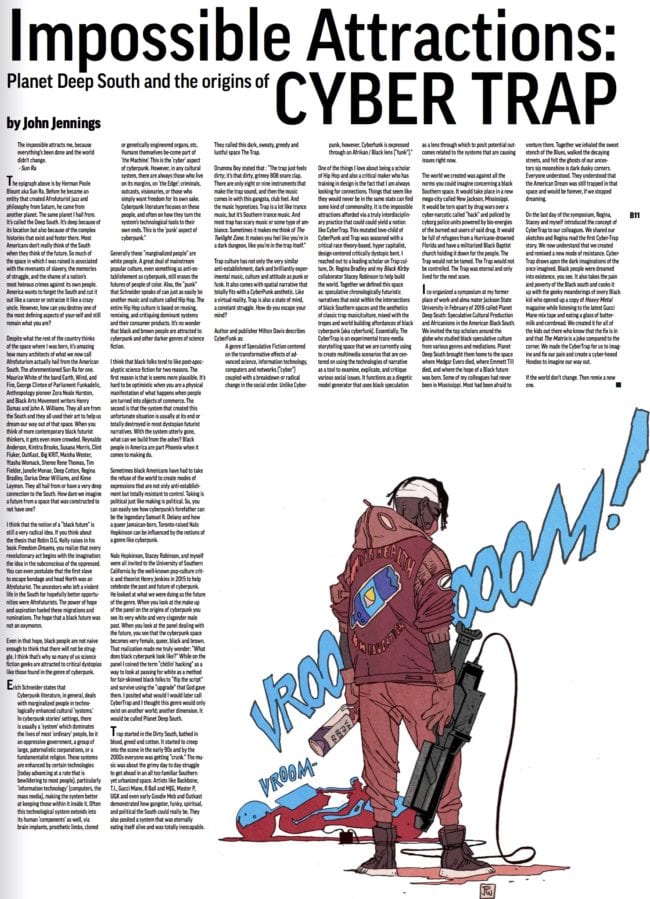 The level of writing and curatorial acuity displayed in LAAB #0 is impressive, to say nothing of the actual comics and illustrations which color its pages. Wimberly, who had already cultivated a laudable career for his self-published books and commission work for Marvel, experienced a boon of popular attention following the publication of his editorial comic “Lighten Up” for The Nib in 2015. Recounting his time working as an artist-for-hire on Marvel’s Wolverine & The X-Men #10 and the embattled thought process of being asked to lighten an ethnically diverse character’s skin tone by his editor, “Lighten Up” sparked an impassioned discourse within and outside of the comic community with regards to the issues of implicit bias and soft censorship which persist throughout mainstream comics editorship. Republished here, along with several of his other well-known works, the piece is wholly characteristic of Wimberly in his element, exhibiting both his formalistic thoughtfulness and his persistent, conscious consideration of the cultural language of race as interpreted through the medium of comics. Whether it be his ‘Black History’ portraits of Janelle Monae and George Clinton, his allegorical interpolation of Jean-Luc Godard’s Alphaville in ‘Africa’, his interpretation of jazz composer Sun Ra's “origin story” as a cosmic savant-sojourner styled after Jack Kirby’s Galactus, or his one-page spread of the byzantine, unconscious odyssey of the Imp from Winsor McCay’s Little Nemo in Slumberland, Wimberly asserts himself as a thinker and draftsman with a rich knowledge of both art history and the history of comics.

Were LAAB #0 simply a ‘best-of’ collection of Wimberly’s work,  it would’ve made for an entertaining book. But it’s so much more than that. LAAB is a comics criticism zine, yes, but it’s also a visual mixtape; a literature review; a manifesto in action, as ideologically charged and aesthetically incandescent as the the arc of a Molotov cocktail caught in mid-flight. In the vein of Q-Tip’s refrain on “The Space Program”, Wimberly warns his readers of how the technology of aesthetics can be used to great harm at the expense of the marginalized, all while at the same time explicating the ways in which those very same aesthetics, when put in the hands of whom they were designed to marginalize, can become instrumental in the creation of concepts, avenues of thought, and possible futures heretofore thought impossible. True to the final line of its opening, LAAB is not a product; it’s a work in process. 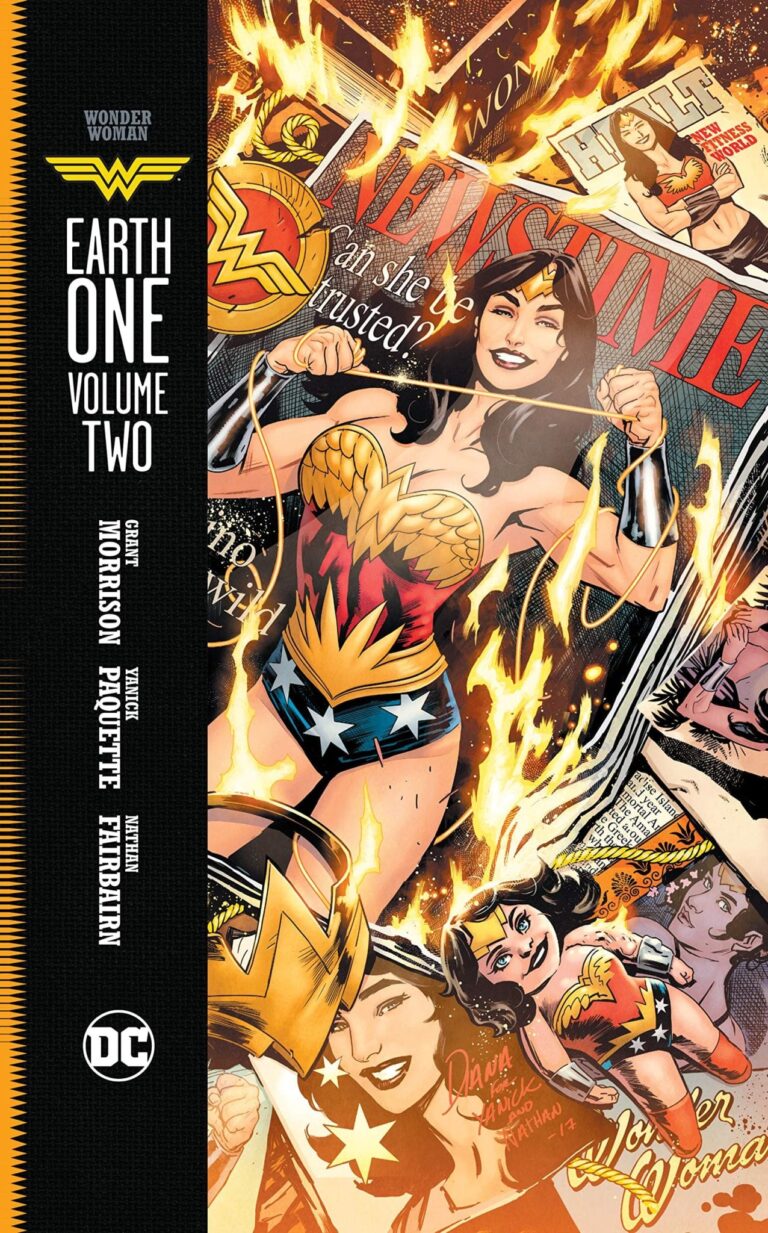 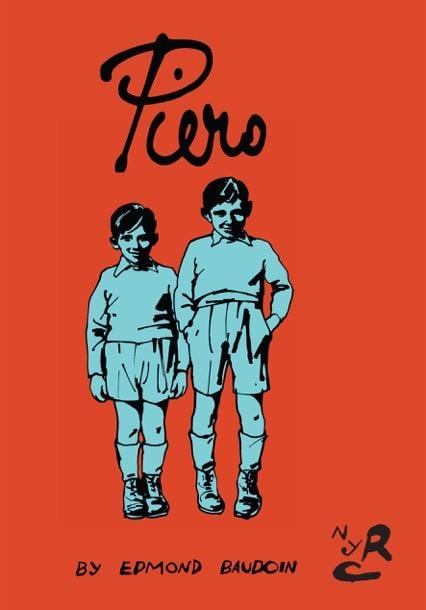