There is a growing skepticism I’ve observed, and basically share, regarding what’s called “dystopian fiction.” It probably doesn’t need to be said that dystopias have become ubiquitous across the storytelling landscape. We don’t need to talk about why they’re ubiquitous either, because we all know why. The science fiction writer Kim Stanley Robinson characterizes the genre’s effect as the “vicarious thrill of comfort as we witness/imagine/experience the heroic struggles of our afflicted protagonists—rinse and repeat. Is this catharsis? Possibly more like indulgence, and creation of a sense of comparative safety.” Although many of these stories attempt some form of social commentary, they very rarely justify the indulgence Robinson describes. The dystopia is often ineffectual satire at best, and painfully corny nihilism at worst.

Girls’ Last Tour is an apocalyptic manga from the mononymous Tsukumizu, published in 6 volumes in English by Yen Press. At a distance, the series might appear to be a classic example of the above. Since I mean to explain why I think it is the best longform narrative comic of the 2010’s, I want to contend with that perceived corniness. 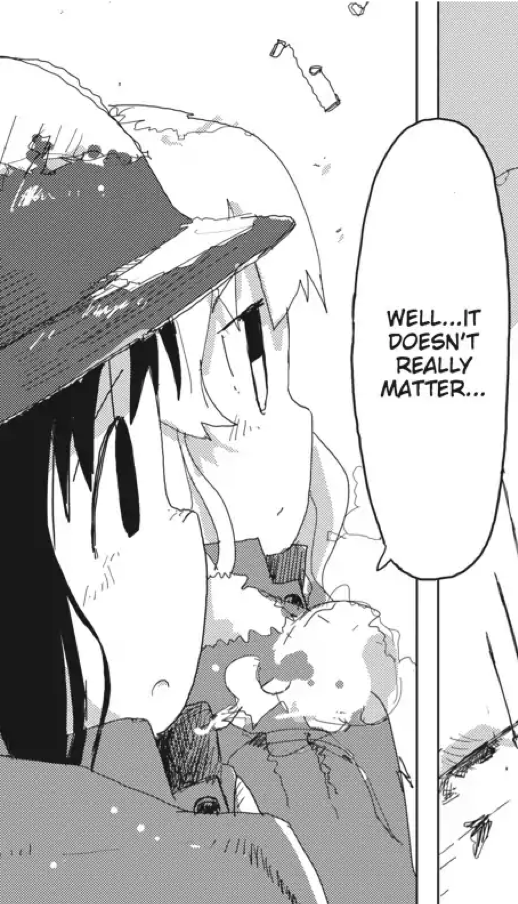 Protagonists Chito and Yuuri are among the very last living creatures, exploring the ruins of civilization on an old military vehicle. They very rarely meet other humans. Chito can read and write a little, and often wonders aloud about the weird structures that surround them. Yuuri is naively, sometimes dangerously, unconcerned. They are only searching for food, fuel, and water - anything more is a bit of a long shot.

The series is marked by quietness. Most chapters consist entirely of Chito and Yuuri navigating a space, speculating about the former civilization (which they were too young to have seen much of firsthand), and sometimes having an experience, like listening to the rain or getting drunk under the stars. As dire as the girls’ situation is, they are rarely very stressed, and the stakes are never that high in any given chapter. In fact, the mood is almost lighthearted. The girls tease each other. There are jokes. There isn’t much conflict. This quietness makes moments of danger, few and far between, ring out like a bell - it’s easy to forget how vulnerable the characters are.

This vulnerability is emphasized by the characters’ softness contrasted by the harsh, raw lines of the environments. The buildings and enormous industrial spaces the girls navigate are full of inventive forms, yet also feel practical. They have such a presence that they often appear drawn from observation, even when they couldn’t have been. Chito and Yuuri’s bodies are so airy and light that they seem like ghosts in comparison. They’re drawn kind of like typical adorable anime girls, but they clash with the backgrounds’ rough rigidity in a way that makes both feel somehow more grounded and weirder. It’s a world that feels as real as a dream does. 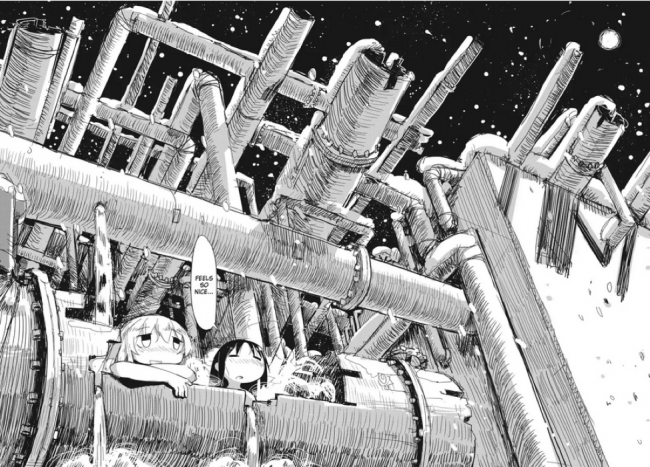 In one story, Chito and Yuuri come to realize that a huge row of lockers is a sort of cemetery, and the items they have taken from it are mementos for the dead. They try to return the items, but can’t remember which ones go where. The series is full of moments like this: Characters seek to accomplish goals that are doomed to failure or, even if they aren't, seem kind of pointless. After all, it’s hard for anything to make much of a difference at the end of the world. But the series doesn't mock these attempts. Regardless of whether these actions are “meaningful,” they are still, to the characters, worth doing.

All of these qualities give Girls’ Last Tour an incredibly specific tone. It succeeds at being incredibly sensitive while being utterly unsentimental. It’s even playful without being the least bit ironic or cruel. And while the story isn’t overtly cynical, it doesn’t go for positivity either. The perspective expressed by Tsukumizu is probably something like what Krazy Kat means when Ignatz asks her, “Do you look upon the future as an optimist or a pessimist?” and she says, “I look upon it as just mist.” “Mist” is not “somewhere in the middle” – it’s a different way of seeing entirely.

If one needs proof of the delicacy of this tone, look at the Girls’ Last Tour anime, which despite being relatively faithful to its source’s content doesn’t quite nail it. More than the comic, the anime is concerned with being Entertainment, and ruptures the series’ calm with dramatic camera zooms, 3D effects, a conventional soundtrack, and unnecessary expository flashbacks. Even the slick precision of the artwork, day to the night of the comic’s improvisatory roughness, feels inappropriate. Though not a bad watch, the anime emphasizes how necessary each element of the Girls’ Last Tour comic is - without this particular sensitivity, it doesn’t work.

Even if Girls’ Last Tour does avoid being misery porn, why write about a doomed future at all? Many have begun to valorize utopian fiction as a necessary antidote to the dystopian sensibility, specifically in leftist circles. The beautiful quote from the late sci-fi author Ursula K. Le Guin, “We will be wanting writers who can imagine alternatives to how we live now,” is a popular example. Many others claim to want art that shows a way forward from our current neoliberal hell. It’s easy to understand, then, why even a “well done” dystopia can be frustrating to some: If it doesn’t, in a direct and obvious way, show us a solution to capitalism, what’s the point?

It’s worth mentioning that Girls’ Last Tour is not exactly “hard sci-fi,” which tends to ground its fiction in scientific fact. The books aren’t very interested in exploring how their civilization failed (although it’s implied that this was the result of an enormous war), or in presenting an entirely “plausible” survival scenario. The girls’ longevity is tied to their piloting a reengineered Kettenkrad (a sturdy German Nazi military vehicle, of all things), and to a string of random good luck in finding supplies. This requires a generous suspension of disbelief. No attempt is made to convince the reader this world is “possible” beyond Chito and Yuuri’s superficial experience of it. The series isn’t quite a warning of a deadly future, either; other than its implicit dismay towards war, it does not moralize. In this sense the books actually have very different goals from most speculative fiction: They seek to model not a different world, but a way of thinking.

And perhaps this difference is necessary. Robinson points out that many dystopian stories present implausible or impossible scenarios which are more reflective of present anxieties than of futures that could actually happen. I would describe Girls’ Last Tour this way to a degree - the severity of its world sure reminds me of our own - although I also think it justifies this quality. Because in order to imagine a better future, we first have to acknowledge that, for most people, dystopia is already here.

For example, I don’t think it’s a coincidence that Girls’ Last Tour has appealed to so many trans people in my life. There is a sense of loss and of hopelessness common to pretty much every trans person I know: The loss of years spent not as oneself, and the lack of hope that life will ever get “better” (psychologically, materially, socially, politically). And that’s just those of us fortunate enough to have survived transphobic violence, which black trans women are the most frequent victims of in the US. As important as utopian works may be, I don’t know that the fictional promise of a “better future” necessarily does much for the imaginations of those who have to live in a miserable present. I don’t think picturing a shittier tomorrow is necessarily productive either. No matter what the future holds, we need to figure out how to live right now.

So, Girls’ Last Tour is for those who don’t have the privilege to plan for the future. It is for those to whom hope is not enough. It doesn’t pretend to know what’s coming, and whatever comfort it offers comes with major caveats. But in its quiet rhythm, in its delicate mark making, in Chito and Yuuri’s nonchalant conversations, it demonstrates an approach to the problem of living in a broken world. Yes, it says, this might be it, and I can’t promise it’ll be worth it, but even so, stick around if you can.

What’s more, it shows an apocalypse that has opportunities for joy. This might ring false if the books weren’t also so full of devastation. In this way Tsukumizu poses a single utopian question: If moments of happiness are possible even at the end of the world, what might be possible now?

Perhaps the most remarkable quality of Girls’ Last Tour is that it does not despair. By all rights it should - there is no future for its world, and certainly not for Chito and Yuuri. But they keep moving. They get drunk and dance and play. It’s not because they think there’s anything waiting for them at the end of their journey. Whatever motivates them is something other than hope.