One of the things that has long fascinated me about the way comics work is the extent to which the art of it is about controlling perception. Within a panel, the reader sees a specific image. On its own, the image is an image. In concert with other panels, it becomes sequential art – the comic’s creator(s) directing the reader’s eye and mind from image to image. But it’s not just motion and the passage of time that a comics page creates; it’s the perception of them. The layout sets the pace and the feeling. A long and chaotic night can zip past. The breath after a kiss can become an eternity. We the readers see what the panels show us, and the ways they are laid out guide the ways we read them. Or, to put it a bit more simply, telling a story well in comics is often a matter of knowing where it aims to move, how it aims to move there and why it is moving the way that it is. Meredith Gran’s Octopus Pie, serialized online from 2007 to 2017 and in five print volumes by Image, is currently re-running online with commentary from Gran, a masterclass in this piece of comics craft. And, for that matter, the rest of comics craft. It’s a genuinely terrific work – one that is a joy to read, and whose mechanics are a joy to delve into. 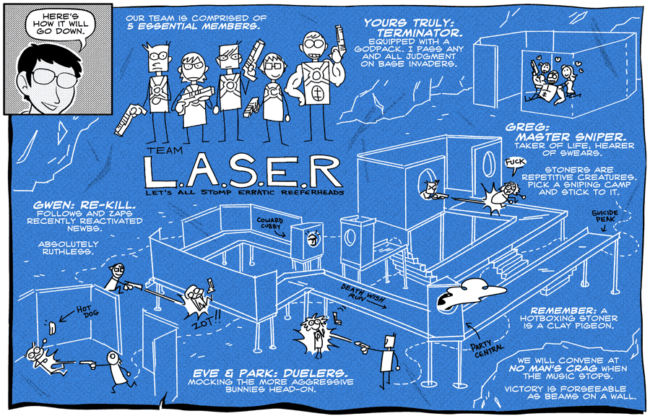 While the most famous examples of Octopus Pie’s formal work would come late in its run, Gran’s craft was deliberate and thoughtful from the start. Take, for instance, the 148th comic – “team l.a.s.e.r.” The comic takes the form of a blueprint for domination in a nerds v. stoners laser tag match, presented by Chris, one of the nerds, to his teammates. While the majority of the comic is contained within the blueprint, a single panel of Chris introducing his plan frames the design as something is passively viewing, but as something they are actively the reader being invited to observe. It grounds the reader in the nerds’ perspective. Furthermore, the use of color for the blueprint (Octopus Pie was primarily told in greyscale for a significant portion of its run) enhances the feeling that it’s an in-universe document, as opposed to a colorized comic. In her notes from the rerun, Gran writes “It’s fun to draw diagrams in comics, which are sort of diagrams in themselves, albeit a little more sexy.”

And within the blueprint itself, the doodles of the cast are clearly recognizable as specific (if unflatteringly caricatured) folks on the stoner side. It isn’t just that the stoners are readily recognizable as themselves even in doodle form, it’s that the contempt in which the nerds hold them is similarly identifiable through the caricaturing.

Gran’s cast grow and change throughout the comic’s run, even as they remain recognizably themselves. Series protagonist Everest “Eve” Ning begins Octopus Pie committedly grouchy and deeply lonely. Over the course of the run she builds a circle of friends and becomes easier going. But she struggles with the uncomfortable places where her childhood and her adulthood intersect. Eve’s best friend Hanna starts out content with who she is and where she is. But she struggles when that comfortable status quo is disrupted, whether gradually or dramatically. In the wake of her long-term romantic relationship with a man named Marek ending, she blows up one of her major friendships. Her recovery requires her to adjust to the sheer difference of her life. And that adjustment is not easy or without hiccups – as seen in the 742nd comic, colored by Sloane Leong, “the witch lives.” 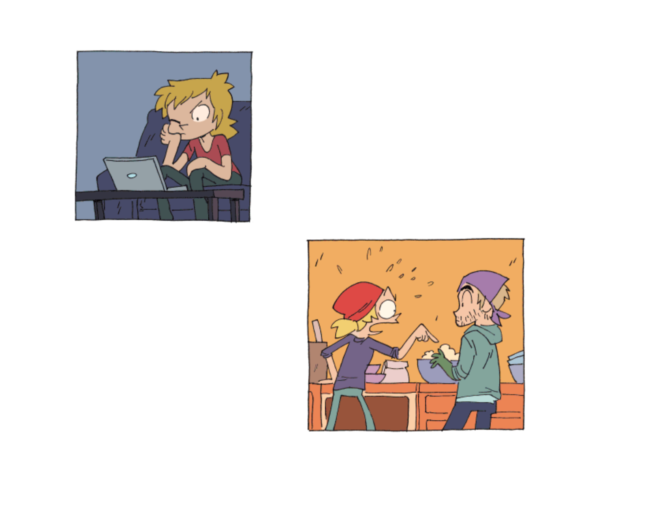 That particular comic also stands as an excellent example of the ways in which Gran uses the space and shape of her comics to convey feeling and the inherently relative nature of time. In her rerun notes, she says, “These things aren’t linear – they dot our reality and become, as Hanna puts it, a ‘dull normality.’ There is no victory, only a continuation where the pain subsides at an almost undetectable speed.”

Jogging gives Hanna something that she can do reliably, setting up a recurring image throughout “the witch lives.” By returning to Hanna jogging again and again, Gran establishes the passage of an extended period of time. She then uses the theoretically infinite space of a digital page to both stretch and compress that time. Certain panels are clustered together, as events hit Hanna in quick succession. Others stand alone, be they a moment as significant as Hanna deleting Marek’s phone number or as mundane as her cleaning the counters. There is a rhythm to the comic’s passage of time, a forward momentum that enables the reader to get in sync not only with what Hanna’s experiencing, but how it feels to experience it. 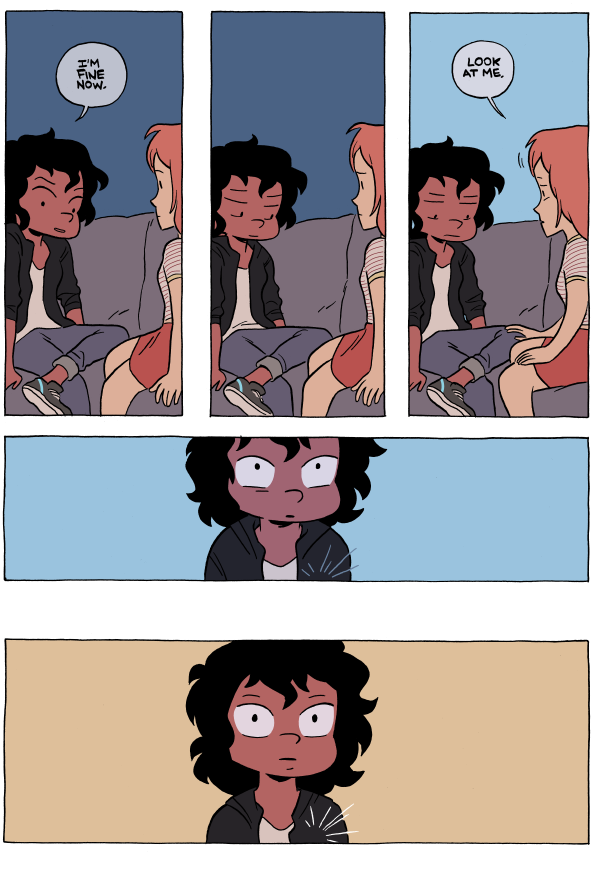 Gran also has a knack for zooming in on quick, quiet moments and giving them the attention and space they need to make their full impact. Case in point, comics 829 to 833, presented together in the reruns as “filling in the blanks.” Gran and colorist Valerie Halla focus on the expressions of characters Jane and Marigold, especially towards the end of the page. Actions that take instants are magnified and given space to breathe. Jane feels her heartbeat as she looks in the eyes of the woman she has just started a relationship with. Marigold watches Jane watch her. It’s a brief exchange. But Gran and Halla make it something huge, a moment that becomes A MOMENT.

Gran’s control of Octopus Pie’s tone is as skillful as her control of its layout. While the vast majority of the comic is best described as a slice-of-life dramedy, it has the narrative and structural flexibility to hop into other genres, to stretch wildly (all the way into full-blown psychedelic science fiction at times) and then bring itself back to its ordinary without shattering.

That same control also enables Octopus Pie to click in both its most dramatic and its most comedic moments. Gran, along with Leong and Halla, keeps an eye on the little details, the tells. Hanna and Marek’s impending separation was presaged by their spending a great deal of time physically apart from one another on a camping trip with their friends. Eve’s relationship with cannabis is never the primary focus of a story arc, but she gradually moves from abhorring its very existence to tolerating it to enjoying it to, during an introspective moment atop Coney Island’s Wonder Wheel, realizing that her use of it may have become unhealthy. 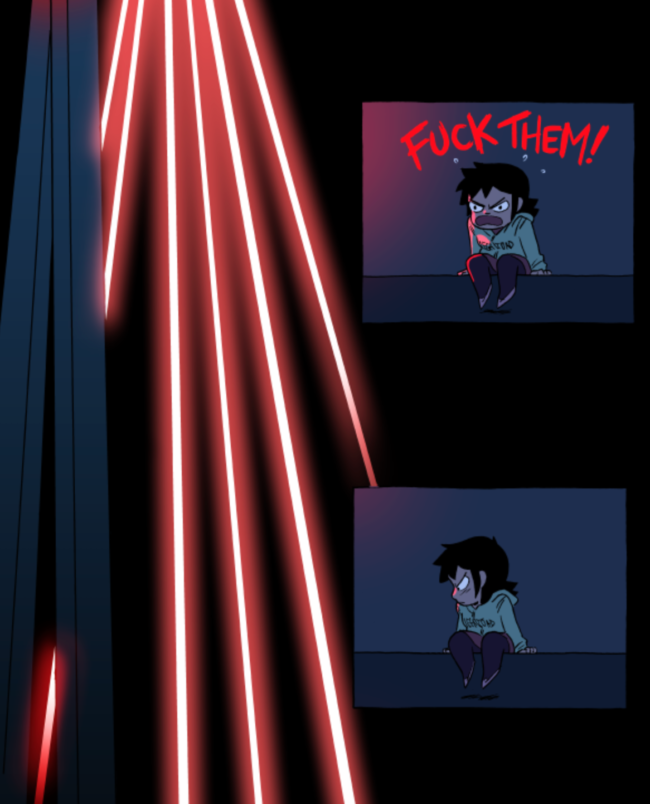 On the lighter side of things, that attention to detail also enables Gran to mix up the types of comedy she deploys throughout Octopus Pie. Even as the cast mature and gradually come into themselves, certain aspects of their earlier selves remained constant, down to the rules which governed how they interacted with the comic’s reality. Consider comic 847, “officially i live for your every whim.” Eve and Hanna, being the ensemble’s leads, are present in some capacity for many of Octopus Pie’s tonal shifts – this in turn makes it easier for them as characters to accommodate those shifts. In the case of comic 847 in particular, Eve is so overjoyed by Marigold and Jane’s relationship that she transforms into a blissed-out butterfly version of herself. It’s gloriously bonkers, an expression of Eve’s emotions that works even in a lower-key part of Octopus Pie: because those emotions remain genuine, the fantastical is not terribly far-fetched for Eve, even if it would be for other characters in the comic.

Finally, there is the matter of the single greatest Smash Mouth joke I have ever personally encountered. Octopus Pie’s final storyline opens with the fallout from the destruction of Olly’s Organix – the dodgy grocery where Eve had worked throughout the comic’s run. The previous storyline saw Eve starting to come to terms with a few long running issues she had been dealing with. And she began a full-blown romance with her longtime friend Will, with whom she had a complicated, comic-spanning relationship. The new couple to return to New York only to discover Olly’s ablaze.

Comic 972, “well,” picks up with the ashes. Or so it seems, at first. Aside from being an applause-worthy invocation of Shrek’s favorite band, the comic ably demonstrates Gran’s mastery of comics as a form. The somber opening, with a ruined Olly’s bag floating into nothingness, confirms to the readers’ that the store is well and truly gone. The long dark stretches of the page in which the bag floats captures the moment, creating a space in which it can be processed. And then the lyrics arrive and the goofiness sets in. The moment is but one of many in a life, a life that will be all manner of things. Hanna pauses her ode to Steve Harwell and company to reflect on relationships ended and broken, and then gets right on back to the song. It’s a riff on Octopus Pie’s fondness for using digital space as a crucial storytelling tool that pokes fun at itself, even while standing as a damn good example of why and how the comic works so well.

That level of care and craft is present all throughout Octopus Pie. The result is one of the finest webcomics I’ve ever had the privilege to read. 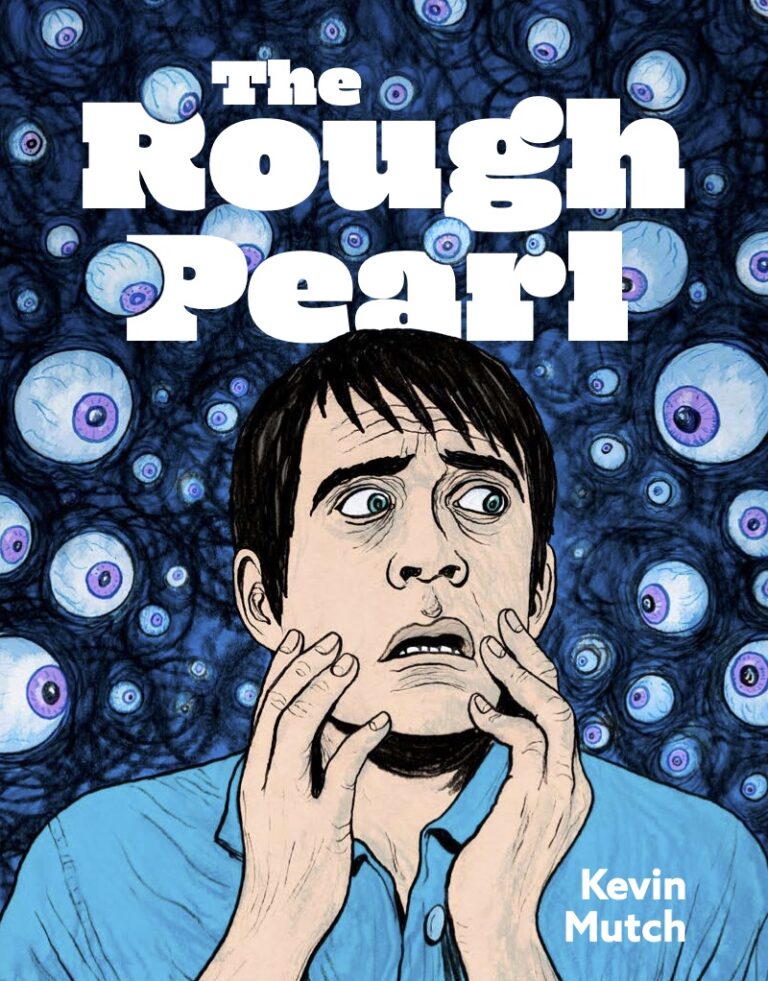 The Many Worlds of Kevin Mutch 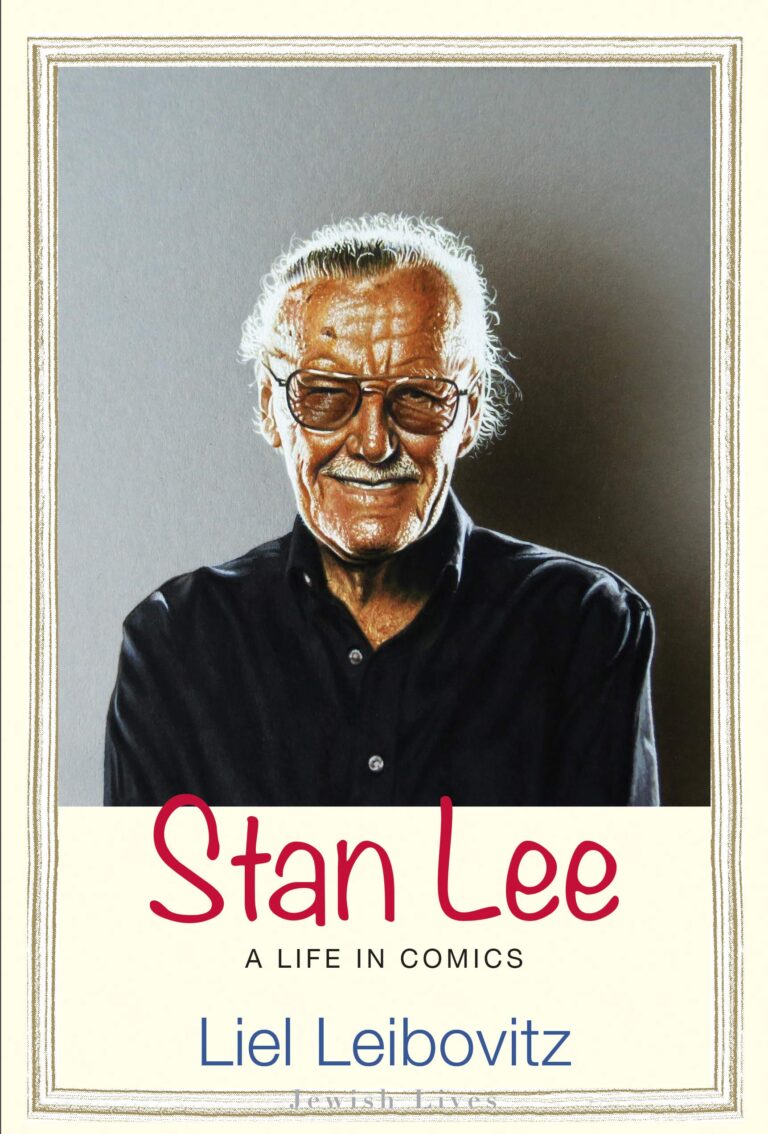