The big takeaway from the Memorial Day weekend meeting of the National Cartoonists Society is that Non Sequitur’s Wiley Miller was named Cartoonist of the Year and presented with the Reuben, a heavy metal statuette in the shape of a pile of comical characters.

Three other cartoonists were finalists for the award. All four finalists, as is predictable with the Society, are syndicated newspaper cartoonists. It’s as if cartooning does not exist in other venues than newspapers—despite NCS’s awarding of plaques for achievement in those other venues.

The nominees for the Reuben in addition to Miller: Hilary Price, Rhymes With Orange; Stephan Pastis, Pearls Before Swine; and Mark Tatulli, Lio and Heart of the City. Price and Tatulli were first-time finalists; Pastis has now been the bridesmaid for six consecutive times. He should not, however, be discouraged: Dan Piraro (Bizarro) won in 2009 on his eighth nomination; ditto, Pat Brady (Rose Is Rose) in 2004. And we all lost count of the number of times Garry Trudeau was nominated for Doonesbury before he won in 1995.

The 2014 NCS “Reubens Weekend,” as it is termed, is the 68th annual gathering of the Society. It took place in the Omni Hotel in San Diego, in the shadow of the city’s Convention Center where, in another 6-7 weeks, comics will reign supreme during the International Comic-Con, July 24-27. Over 330 people attended, 160 members plus their spouses and hangers-on. That’s about 40% of the Society’s 495 members, a more than healthy turnout for a volunteer membership organization.

As for the self-congratulatory aspect of the event, Speed Bump’s  Dave Coverly had an appropriate rejoinder, made when he accepted the plaque for Best Newspaper Panel: “To a certain extent, we’re slapping ourselves on the back, but,” he added, “—that’s who you want to slap your back.”

To be recognized by one’s peers is more than merely satisfying.

The announcement of this year’s Reuben winner is the final event of the Saturday evening awards banquet: it is preceded by the presentation of other awards, including the Division Awards in 15 areas of cartooning endeavor.

Before those were presented, NCS conferred the Silver T-Square for service to the profession on Bunny Hoest, who is affectionately regarded among cartoonists for her conviviality and support of the profession and respected for ably continuing after his death the comics features her husband, Bill Hoest, invented. Next, the Milton Caniff Lifetime Achievement Award was presented to comic book cartoonist Russ Heath, who, after being assisted from a wheelchair to the podium, began by remarking, “What do you say when your pants are falling down?”

This year, the Society also presented one of its rarer mementoes, the A.C.E. Award (Amateur Cartoonist Extraordinary) to “Weird Al” Yankovic, a comedian described in Wikipedia as “singer-songwriter, musician-parodist artist, record producer, satirist, music video director, film producer, actor, and author. Known for his humorous songs that make light of popular culture and often parody specific songs by contemporary musical acts,” he aspired to work at Mad and has also drawn cartoons on occasion, hence the award.

The NCS “division awards” (which are sometimes erroneously referred to as “Reubens”) are listed below with the names of the winners and finalists in each category. The jurying for the Division Awards is accomplished by the NCS chapters, whose members select in the assigned category three finalists, of whom one is designated the winner (but not announced until the presentation at the Reubens Banquet). All finalists appear as nominees in the months before the awards are presented, and because being nominated for any of these awards is a distinction in itself—the considered judgment of one’s peers—I’m listing here the nominees as well as the winners in each division, identifying the latter with an asterisk before their names; those with two asterisks were not present to receive their awards.

Of the 15 division award winners, 6 didn’t come to the event; that’s 40% no-shows. Andrew Robinson, however, sent a videotape that was played when he won.

The formal climax of the evening is the presentation of the Reuben, the name of the trophy given to the “cartoonist of the year.” By the custom of the awards banquet, the Reuben is presented by the oldest Reuben recipient present—for years, that’s been Mort Walker (who won in 1953 for Beetle Bailey), but he was unable to attend this year; hence the next in age and dignity, Mell Lazarus (who won in 1981 for Momma and Miss Peach), presented the trophy this year to Wiley Miller, whose unique achievements in on the funnies pages of the nation’s newspapers exceed even the customary high standards set by previous Reuben winners, as we hope to convince you in a subsquent Hare Tonic PROfile of Wiley (his signature name).

Taking the podium to receive the trophy, his cherubic face aglow, Wiley began a graceful acceptance speech by noting that it was “a once-in-a-lifetime award.” He probably thought he was speaking figuratively, but it is also true literally. Only a handful of cartoonists have won twice (Milton Caniff, Dik Browne, Charles Schulz, Pat Oliphant, Jeff MacNelly and Bill Watterson), and after Watterson won in 1986 and 1988, NCS adopted a “one to a customer” policy. Never again will two Reubens decorate the mantlepiece of some cartoonist’s domicile.

Figuratively, Wiley was expressing the thrill and the honor he felt at finding himself among a distinguished roster of the profession’s most noted practitioners. Winning the Reuben means adding one’s name to a seven-decade line of great cartoonists, Wiley later told ComicRiffs contributor Tom Racine, and “to be part of that pantheon is very important.

“At my age,” he continued, “I’ve been around long enough [to know] that this doesn’t mean I’m going to make more money or, like with an Oscar, I’ll get more plum roles. Pretty much the only ones who know about it are in [this] room. But it’s important [to me] to be part of that legacy.”

At the podium, Wiley acknowledged that no cartoonist gets to this pinnacle in a career through his own efforts, alone and unaided. All of us, he allowed, have had help—namely, the cartoonists whose work we assiduously copied as youths and which inspired us later. He named in particular The Wizard of Id’s Brant Parker, from whom Wiley learned that the perfect comic strip was one in which there are no words. (Wiley may have intended this reference to emphasize the importance of pictures in comics in an age when many comic strips are distinguished more by the prolixity of the cartoonist than by his pictures. Wiley also insists that comic strip artistry consists of blending words and pictures into a narrative and/or jocular comment that neither words nor pictures can achieve alone with other the other.)

He finished his remarks by thanking his mother, relating an insightful tale of his youth. He, like most of us, spent his school days drawing pictures, often in the textbooks he was supposed to be reverentially studying. At some point, one of this teachers had endured enough of his pictorial shenanigans and summoned Wiley’s mother to lodge a complaint.

Wiley recalled his terror, waiting in the hallway outside the office into which his mother had disappeared into the august presence of the teacher. He feared his mother’s anger or disapproval. At last, he remembered, his mother emerged from the office and said:

“At that moment,” Wiley said, “a cartoonist was born. Thanks, Mom.” 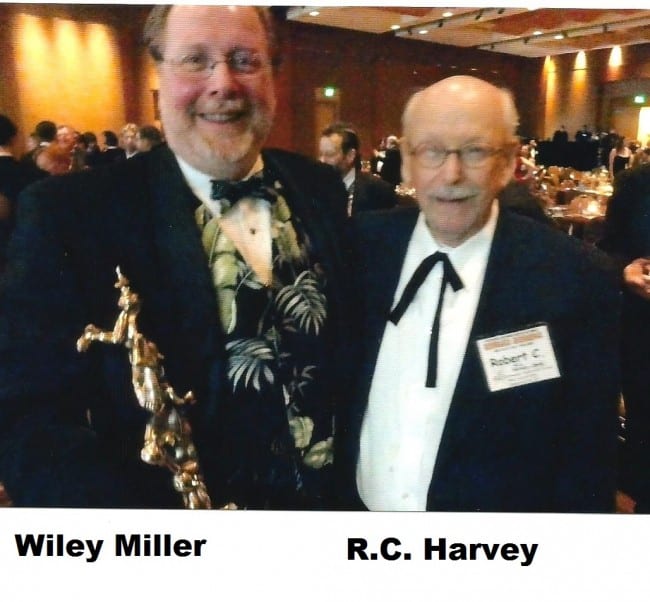 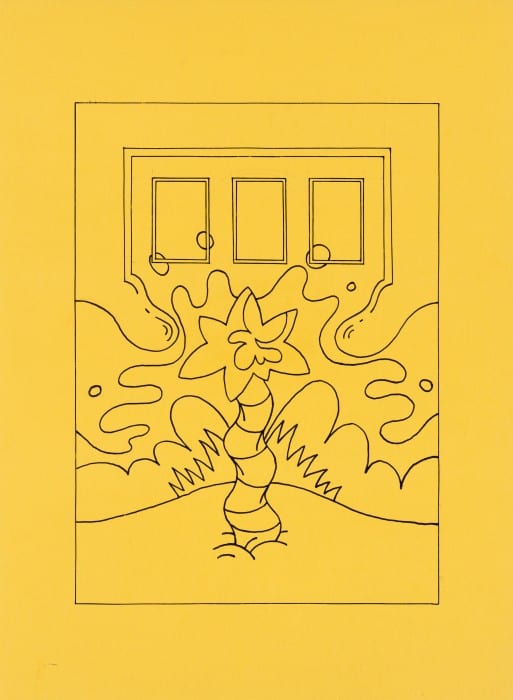 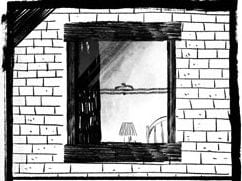