Both in Nurse Nurse but especially in Operation Margarine you’re drawing to a large degree on a certain kind of pulp comics and cinema that trade heavily on sex and exploitation. Despite its influences, Margarine avoids any overt sexualization of its characters, for romantic purposes or otherwise. Is that simply because you felt that element didn’t fit within the structure of the book or was there a more considered, deliberate or even political reason?

I think to this point I’ve tended to compartmentalize sex in my work; like, if I’m going to have sex in a comic, I just want to do a sex comic, even then it tends to stay on the cheekier side of X-rated (for instance the comic “Breeding Season” in Thickness #1 and the Agent 8 series I’m doing for slutist.com). I haven’t really found a way to work sex into my longer stories that feels natural yet, you know? There’s a little vignette where Gemma is post-coital in Nurse Nurse, but I think having sex removed from the equation in Margarine adds to the sense of detachment in that story. I mean sure, I took inspiration from Russ Meyer, but more the spirit than the letter. I think the character Margarine is so detached from her body that sex wouldn’t really enter her universe right then, and it’s implied that Bon-Bon gets used as a side piece, but it doesn’t do very much for her. I saw someone on tumblr say they thought there was room for romance between Margarine and Bon-Bon in the story, which I thought was an interesting way to read it.

Paul Karasik deconstructs a Peter Arno New Yorker cartoon on the... New Yorker site. Which reminds me of this photo of Arno, which remains very very strange.

Jesse Moynihan is on Inkstuds.

Photos from the Dan Clowes opening at Ohio State.

And here are some oddball examples of mid-80s underground art up for auction, including some Clowes work. 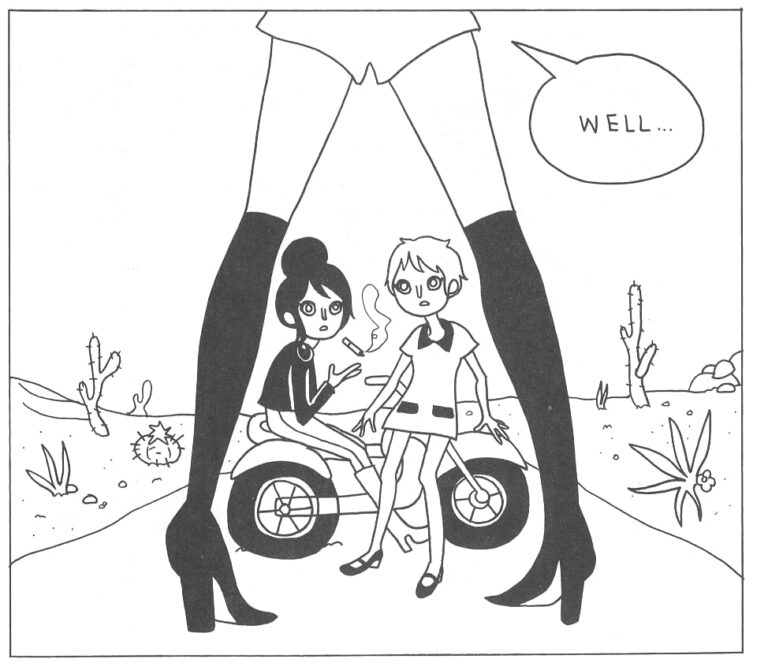 “Ugly Is Good”: An Interview with Katie Skelly

National Cartoonists Society Pats Itself on the Back But Who Better Qualified To Do It?