R.C. Harvey is here with a report from this year's Reuben Awards. Here's a sample:

The formal climax of the evening is the presentation of the Reuben, the name of the trophy given to the “cartoonist of the year.” By the custom of the awards banquet, the Reuben is presented by the oldest Reuben recipient present—for years, that’s been Mort Walker (who won in 1953 for Beetle Bailey), but he was unable to attend this year; hence the next in age and dignity, Mell Lazarus (who won in 1981 for Momma and Miss Peach), presented the trophy this year to Wiley Miller, whose unique achievements in on the funnies pages of the nation’s newspapers exceed even the customary high standards set by previous Reuben winners, as we hope to convince you in a subsequent Hare Tonic PROfile of Wiley (his signature name).

Taking the podium to receive the trophy, his cherubic face aglow, Wiley began a graceful acceptance speech by noting that it was “a once-in-a-lifetime award.” He probably thought he was speaking figuratively, but it is also true literally. Only a handful of cartoonists have won twice (Milton Caniff, Dik Browne, Charles Schulz, Pat Oliphant, Jeff MacNelly and Bill Watterson), and after Watterson won in 1986 and 1988, NCS adopted a “one to a customer” policy. Never again will two Reubens decorate the mantlepiece of some cartoonist’s domicile.

And we also have John Seven's review of Conor Stechschulte's The Amateurs. Here's a sample of that:

Stechschulte spoke at the New York Comics and Picture-Story Symposium about his influences in crafting The Amateurs, a mix of various heady ideas spurred on by a passage in a Werner Herzog book about the filming of Fitzcarraldo that relates a bloody scene involving some bumbling butchers in India in a bloody scene of carnage. This is directly reflected in Stechschulte’s story, a gruesome slapstick, as are the other influences he mentioned in the talk, including the film writings of Kaja Silverman, particularly in regard to disconnection, and the horror of Lovecraft. All these concerns, though, are filtered through Stechschulte’s personal approach and tempered by the most overt presence in the entire book — absence. Not just absence of memory, but absence of context, as if Stechshulte has stripped away explanations in order to focus his study on results. A sense of foreboding dominates the book, but foreboding of what? Nothing set the foreboding in place and there are no promises of solid reasons to explain the unease.

—News. Brigid Alverson delves into the fallout of the Graphic.ly sale, interviewing creator Dave Dellecese about alleged payment problems, among other issues. There will be a bone marrow drive in support of Seth Kushner at this weekend's New York Comic Fest.

—Funnies. Comics Alliance has a preview of the upcoming, long-awaited new collection of Jim Woodring's Jim. And Emily Carroll has up a new webcomic, The Hole the Fox Did Make.

National Cartoonists Society Pats Itself on the Back But Who Better Qualified To Do It? 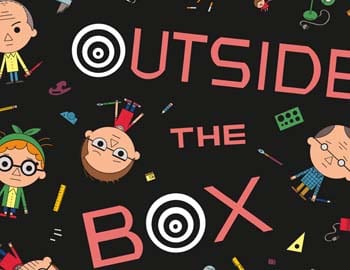 A Conversation with Hillary Chute