Reader, do you listen to the Mumble Rap? I try to avoid it, but it's pervasive, hard to miss if you spend any amount of time watching Instagram stories. (Go on, scoff, but comicsworkbook's IG stories hip me to a groovy new 'toonist almost every day.) So, that mumbling music — if you've heard it, you may have noticed some of the performers ad libbing a soft, quick "ooh" after every couplet. It's annoying but it works, I guess — some of those mumblers are millionaires. So I'm going to try it in today's links, adding an "ooh" after each list item. Let me know what you think. (Remember to read the word "ooh" softly.)

• Humor me, won't you, and pretend you haven't already read everything out there about Marvel refusing to publish an unedited Art Spiegelman essay in which he compares Donald Trump to the Nazi-themed Marvel villain The Red Skull. Spiegelman was asked to remove the reference, but took the essay back rather than do so. I'm the last person on Earth to put it on a comics site, but if you've only skimmed the headlines and excerpts, now's a good time to head to The Guardian to read the article that got all the hoopla hooping, as well as the essay in full. It's an important piece, and I'm damn glad I didn't have to buy a $225 book to read it.
(Ooh.)

• The Ignatz Awards nominees have been announced! Yowza! I wish everyone on the list could get that brick. The Ringo! Awards put out its list of noms as well. Is anyone on both lists? (Where all my cross-referencing enthusiasts at???)
(Ooh.)

• I really enjoy the work of cartoonist Edward Steed, whose single panels and strips I've only encountered in the pages of The New Yorker. This week, Steed gets his first cover for TNY. An intriguing development! 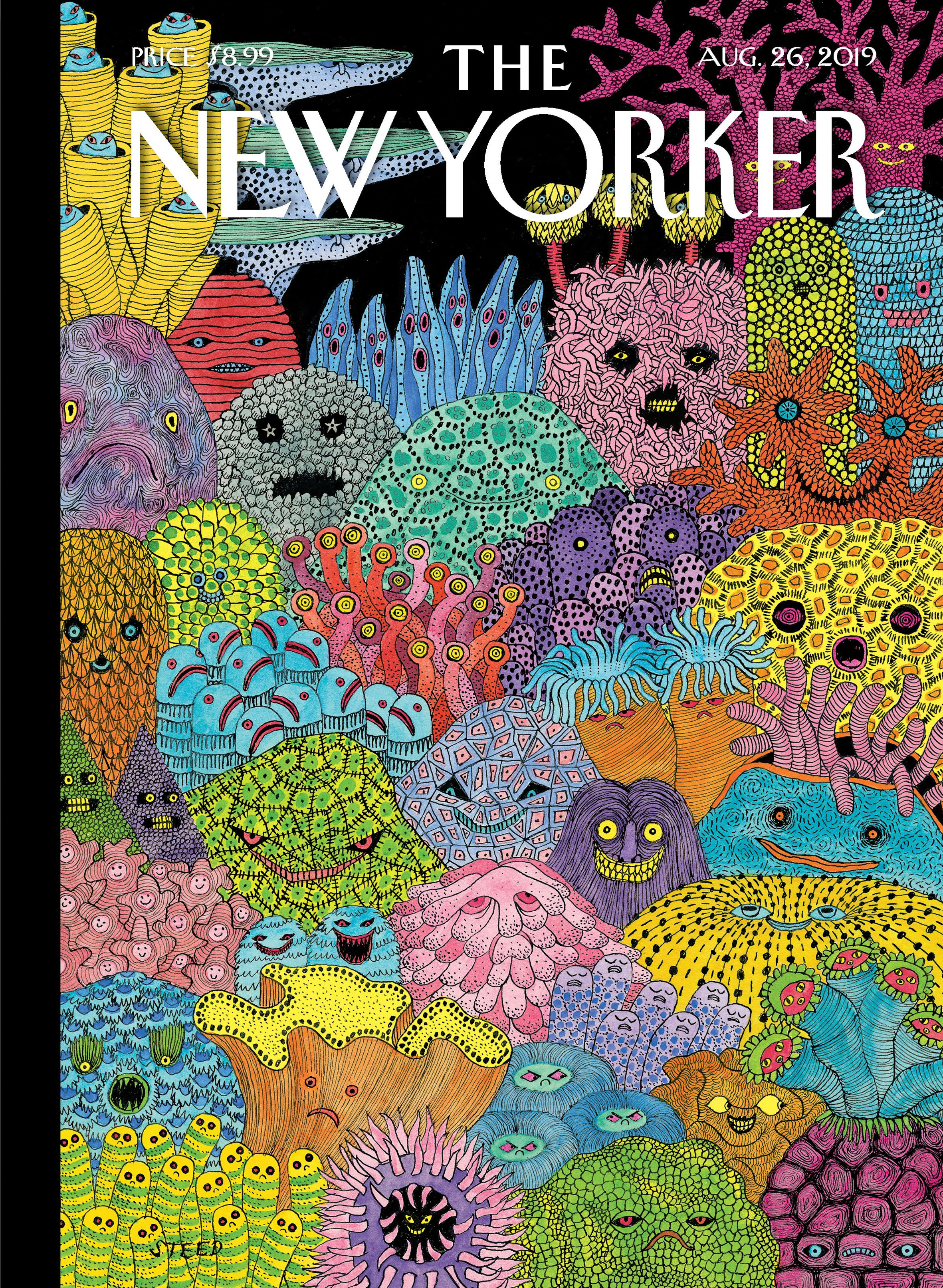 Titled "Sea Changes," it's an unusual image compared to most front pages of the magazine — some bizarre lovechild of the characters from Where the Wild Things Are, Matt Furie's monster class photos, and Leaving Richard's Valley. I assume it will remain an outlier so I'll enjoy it while it lasts. Françoise Mouly asked Steed some questions about the image, providing me with another reason to love the guy:

An image for the cover has to create its own narrative. Is this your comment on summer?

I don’t think so. It’s just a drawing of a coral reef, an imaginary one. Perhaps you can tell that I didn’t do any research. But I did see a reef once, a few years ago.

• Comics did well for themselves at the science fiction-focused Hugo Awards, with Charles Vess and Monstress taking home silver rockets, along with a Wonder Woman issue from 1944. (They do this whole retroactive winner thing. William Moulton Marsden is having a busy couple of years.) The Beat has a thorough write-up, with voting breakdowns and everything. (Ooh.)

At this point I would like to stop typing "(Ooh.)" after each item and ask that you please mumble it quietly to yourself when you come to the end of a paragraph.

• Also in Small Press Expo news, the event has announced its programming schedule. It says "tea will be served" at Keith Knight's panel. Someone please confirm.

• I've spent my share of rainy Thursday afternoons poring over Colleen Doran's breathtaking art, so I was happy to kick back on a sunny, sweaty Monday with TCJ.com and read Alex Dueben's interview with the creator on the eve of her new book's publication.

• The new issue of Bubbles zine is coming and they'll be chatting with the aforementioned Matt Furie. I hope they ask him about the monsters I mentioned afore!

• AIGA put together an in-depth and cheeky article about the flat, simple style of cartoon-like illustration so ubiquitous in tech and advertising these days. It's amazing how even the COLORS become part of the trend. It flattens my soul, that's what it flattens.

• Big things popping off on TCJ these past few cycles include Tom Shapira's epic look at the end of Usagi Yojimbo's Dark Horse epoch, Katie Skelly's talk with the uniquely talented Tia Roxae and a Cartoonist Diary by the widely praised Mardou.

• Hey look, Broken Frontier likes Mardou too! I told you about the wide praise!

• Serena Williams tried to hit a drone out of the sky with a tennis ball at the behest of Randall Munroe, and he showed us what happened in comic strip form. (I never thought I'd type the name "Serena Williams" in this column.)

• Meredith Gran started a new comic strip diary site about her adventures in gardening. My thumb is rusty brown, so I hope to learn a thing or too.

• Watch while I blabber all over this sufficiently one-worded Steve Niles tweet:

• When I was about ten years old, my mom signed me up for a cartooning course, in which I drew a woman chasing a man with a frying pan. An older kid drew the Mike Baron/Steve Rude character Nexus and chided me when I told him I had never heard of Nexus. I was ten. I still can't read that comic. But if you're as cool as the chider, you'll be happy when The Beat tells you there will be a new Nexus story by his legendary creative team in an upcoming collection.

• If it's reviews you desire, stay close to home: TCJ did the dance with Junji Ito's Smashed, Lorena Alvarez's Hicotea and Molly Mendoza's Skip. Those Mendoza pages keep knocking me out. And one panel from Smashed is enough to keep me staring at the ceiling for weeks.

• Ditko, the play about Steve Ditko, will be performed this October in New York City, which is where Steve Ditko lived.

• Charles Burns "covered" an Adrian Tomine panel and posted it on his Instagram. Read the comments.

• Hope your shoes are tied extra tight, because it smells like walking tour season. First up is a brand new, ongoing stroll through George Herriman's childhood in New Orleans as curated by Herriman biographer Michael Tisserand. Step livelier if you'd like to join a guided tour of Jack Kirby's Lower East Side life — it's happening next Wednesday in NYC and wraps up with a mixer at a "local haunt!"

• When you're done with those treks, maybe you could run on up to 'Ronto and convince the locals to name a street after Darwyn Cooke. It's seriouslly officially being considered!

Are you still doing the "Ooh" mumble? That Burns art would have been a great opportunity to do so!

• Some strong previews made the scene this past week: George Wylesol's Internet Crusader here on the mothership, Travis Dandro's King of King Court at Boing Boing, Frank Santoro's Pittsburgh at PW, and the Eric Powell art book at The Beat.

• That Internet Crusader sure is a curious thing. Matt Vadnais gave it the once-over at Your Chicken Enemy.

• Sylvia Nickerson is going on tour to support her debut book, Creation. The schedule is here!

• Do you ever put someone in your feed and even though you like their work when it pops up you don't exactly remember what drew you to them in the first place and then one day they announce their new book is debuting at SPX? And their name is Emil Friis Ernst and the book looks like this?

• My ignorant American ass greatly enjoyed this Pipeline Comics piece about OuBaPo, the French concept of "creating comics with certain constraints." Are you thinking "only inking with butter" or "using fingernails as staples"? That's what I thought! Turns out it's more practical but just as cool.

• Chris Ware was interviewed at Publisher's Weekly. Chris Ware's (new?) comic appeared on the Museum of Modern Art site. Chris Ware and Lynda Barry are going to be on stage together in Brooklyn this October. WARE WARE WARE. Hoo-boy, the Rusty Brown PR run is going to be a beast. Why, they even snuck a mention into my Meredith Gran bullet point up there!

• It's a bizarre creature-heavy week, so here's a peek at the next cover of Smoke Signal, which is looking to be packed full of Tetsunori Tawaraya and hopefully nothing else. (No disrespect to everything else.)

Get ready for the Tetsunori issue of Smoke Signal, debuting at the NY Art Book Fair next month! pic.twitter.com/lAjpesRTtQ

• I'm pretty impressed with the comics content at SyFy Wire, as you can tell because I keep linking to them. They keep it big brand, but with a healthy heap of obscurity. This week they share an appreciation of Nancy Collins' run on Swamp Thing before asking a dangerous question: "Where's the New Wave of Superstar Comics Artists"?

• Rob Clough reviewed Marion Fayolle's The Tenderness of Stones for Your Chicken Enemy. Like most New York Review Comics releases, I would like a copy of this book to live on my shelf.

Listen, I know the "ooh" thing was a failure. You don't have to rub it in. Can we please get on with our lives?

• Soooooo, before we go, there's one other piece of news...GARTH ENNIS IS RETURNING TO THE PUNISHER. WITH JACEN BURROWS DRAWING. Yes, I'm one of those people. The book is called Punisher: Soviet and comes out this November. I know, I know, Spiegelman and Perlmutter and all of it...just let me have this one thing.

So here's an interview with Ennis talking about Soviet and other things, and here's a page from it with Barrows channeling Steve Dillon like never before. I can't help myself, and I don't plan on trying. Ooh indeed. 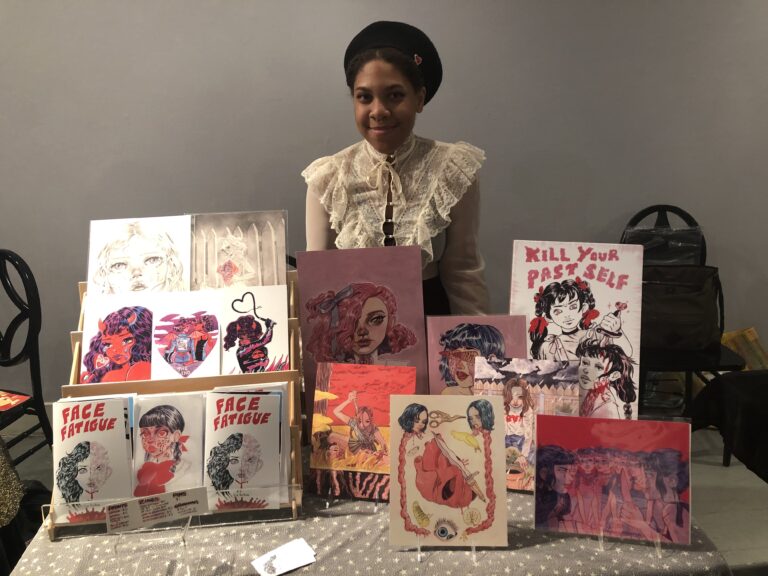 “Vengeance As A Subject Matter Always Excites Me”: An Interview With Tia Roxae 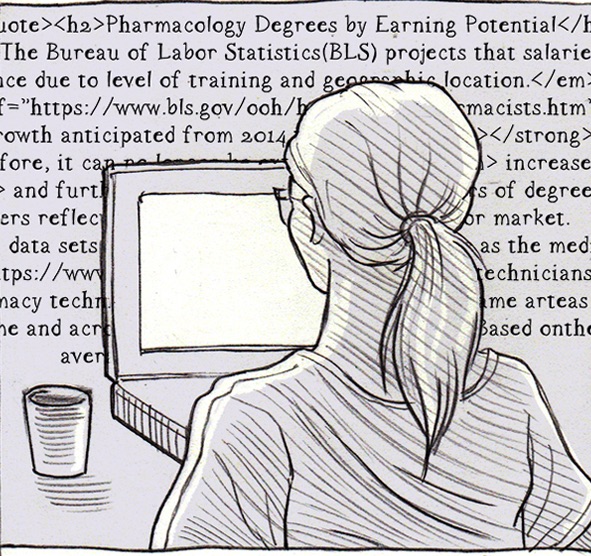