Today at TCJ, we're pleased to bring you Joe McCulloch, who has returned from SPX with a frenzy in his heart. That frenzy has a cause:

While ostensibly the first part of a continuing series -- published as a slightly-taller-than-square softcover by Chicago's Perfectly Acceptable Press, which excels at daredevil feats of very fancy risograph printing -- Grip stands alone as a remarkable statement, one in which the artist's own hands seem to hold the entirety of American comic book history. If Westvind's Kramers story was wordy, sunburnt and hungover like a horror short running unsupervised off the Charlton press, Grip hearkens back to an even earlier time: it's like a Golden Age comic, its hero manifesting fabulous powers seemingly at random and immediately going about accomplishing mighty feats, because that's what you ought to do. It's a comic that feels like it was born unconcerned with the schematics and the expectations of comics, and therefore occupies itself with demonstrations of bravura sensation - Pure Comics Power.

The Guardian goes long on Berlin, Anne Frank and Nora Krug's new one. It's Ger-mania!

Berlin isn’t the only new comic to take on Germany and its wartime politics. This autumn also sees the publication of a graphic novel version of Anne Frank’s Diary adapted by Ari Folman and illustrated by David Polonsky, the Israeli pair best known for the 2008 Oscar-nominated film, Waltz With Bashir; of the remarkable Heimat, a memoir by Nora Krug, a German-American illustrator who teaches at the Parsons School of Design in New York; and of The Three Escapes of Hannah Arendt, a biography of the German-born Jewish philosopher by Ken Krimstein, a Chicago academic whose cartoons have appeared in the New Yorker. Is this a coincidence or does it have a wider significance? Though he has not yet read the other books, Lutes believes it does. “It’s so interesting,” he tells me. “On some profound level, we are all connected to this deeper thing. We are all processing, consciously or subconsciously, our world and having tapped into something that’s in the air, our books have bloomed simultaneously.”

In the volumes, Kaczynski frequently returns to a critique of modern life. In the tradition of theorists such as aesthetic philosopher Walter Benjamin and cultural theorist Jean Baudrillard, Kaczynski considers both the wonders of modernity and the despair of late capitalism. Subjects in Cartoon Dialectics are frequently isolated from others, trapped in a metaphorical (or literal) dystopia. It takes a glitch in the system—an ecological catastrophe, a blackout—for them to find meaning.

Rocko Jerome has that Olivia Jaimes coverage you need regarding the cartoonist recent panel at CXC.

Olivia spoke about how the function of Nancy as a comic is problem solving. There’s a challenge of some kind, and Nancy has to find a way to overcome it. She said that one of her favorite Bushmiller strips was the one where Nancy shifts the whole panel to straighten a picture on the wall (Which I know that I’ve seen, but now can’t find to show you).

-She’s into Sudoku and said that a lot of the same principles of that applied to the layouts of Nancy.

-She mentioned that Nancy and Sluggo’s relationship is quite platonic. Words to the effect of “People ship them hard…they’re eight.” 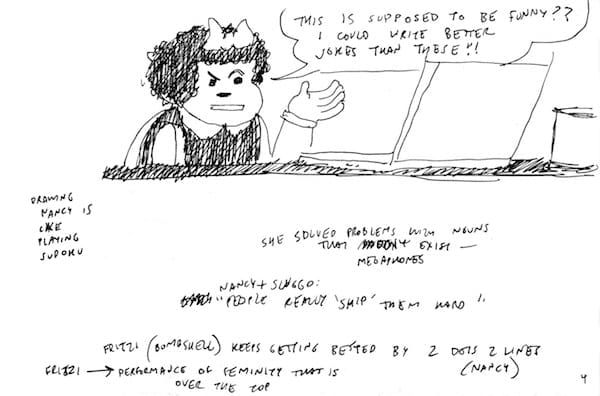 Better Jokes Than These 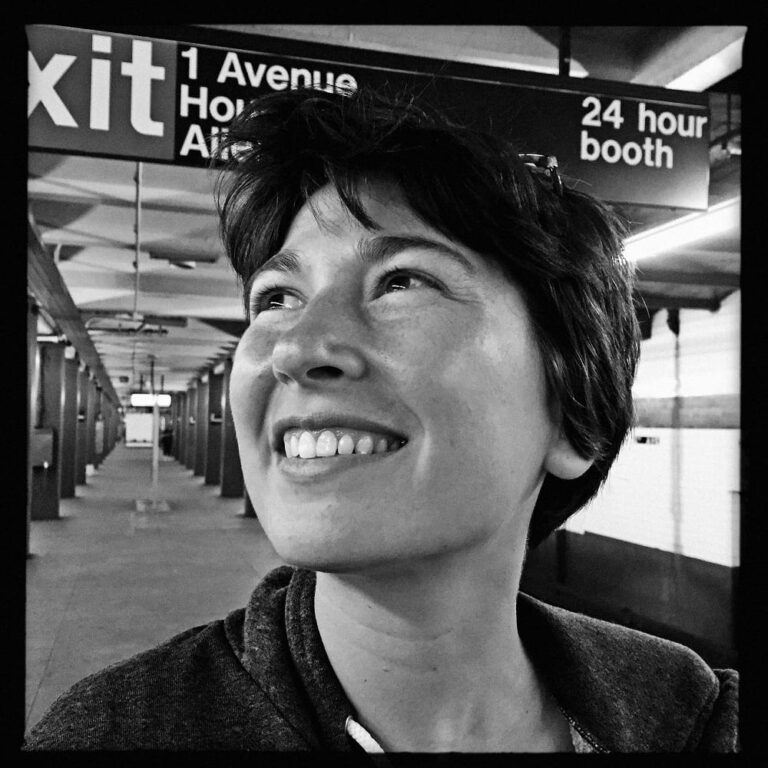 “I Thought It Was A Choice”: An Interview with Liana Finck