This week at The Comics Journal, we're going all in on Nate McDonough, whose Cartoonist Diary launched on Monday with a near real time look at his various travels. Today, he's visiting with a Pittsburgh classic: Bill Boichel, the physical embodiment of the phrase "gateway drug" as it applies to comics. What's to come for the rest of the week? Come back and see.

This week's big conversation is with Trevor Von Eeden. In our latest edition of Creator X Creator--the badly named but roughly accurate category of interview where the people who make the stuff talk with others who do so as well--Eeden gets into his history with Josh Bayer, and how that history has influenced the work these two have done together for the next wave of All Time Comics.

I'm COMPLETELY self-taught. As mentioned above, I learn the Zen way--by observation, experience...and as an artist, self-contemplation--because Art is all about expressing The Human Condition...which is inside of EVERY human--so why look elsewhere to learn it? I discovered Alex Toth's work while devouring Neal's photo & art morgue files at Continuity after work (I enjoyed free access to the studio, 24/7)...I also discovered Ayn Rand in '82, while working at Neal's studio. Her book The Fountainhead infused me with the idea that an artist could and SHOULD be a person of INTEGRITY--and her BRILLIANT, dramatic, and highly visual writing style inspired me to create visions of my own on paper--first inside of my head... All of the above, plus my desire to impress and inspire Lynn Varley as an artist (to prove to her her OWN worth) led into the creation of my own comics art and story-telling style in The Batman Annual # 8 (and the early THRILLER issues later on--but that's another story...) I never ask anyone for assistance nor advice in my life, and definitely not in my art...it's all MINE, and that's what makes me HAPPY.

Today, you'll find the return of Rob Clough's High-Low column--this time around, Rob is taking a look at some more off-the-beaten path work from the boundary-pushing kuš!, who recently released some Chinese underground comics.

R. Orion Martin worked for a time as a translator in China, where he found a burgeoning underground comics scene. He has since published fascinating minicomics translated into English and has partnered with the stalwarts over at kuš! as well. These comics feel familiar in appearance and subject matter for American alternative comics readers, but also strange and original. Martin has noted that while a number of Chinese artists looked at manga and manhwa, they either didn't feel like they could draw in that style or it simply didn't speak to them. When they got hold of European underground comics, that proved to be a game-changer. Let's take a look at a few of these unusual comics.

Our first review of the week comes to ya from Paul Tumey, who returns to us with a look at The Artist Behind Superman: The Joe Shuster Story. Tumey claims he's here to stay, and said the handcuffs weren't necessary. But hey, that's company policy!

I almost didn't read this book. Not only is the story familiar to me, but it also stirs up my dyspepsia something terrible. The shameful saga of how badly the Men of Steal who ran National (the company that eventually became D.C. Comics) treated the creators of Superman, the property that made the company wildly successful, is well documented. In 2004, Gerard Jones told the story in Men of Tomorrow: Geeks, Gangsters and the Birth of the Comic Book (Basic Books). Almost a decade later, Brad Ricca expanded the story with his in-depth book, Super Boys: The Amazing Adventures of Jerry Siegel and Joe Shuster—the Creators of Superman (St. Martin’s Press, 2013). Voloj and Campi are well aware they are walking a fairly worn path—these two volumes and eight others on the formation of the superhero comic book are listed in The Joe Shuster Story’s selected bibliography.

Over at Inkstuds, Aisha Franz is talking with Robin about Shit Is Real and the recent Clubhouse anthology.

Over at The Nation, Jeet Heer is delivering a major comics adjacent article, and it's on the subject that's been the talk of the town since last week: the changes at Mad Magazine. We'll be covering this subject in our own way pretty soon. For now? Get your Jeet on.

Over at Sina Grace's Tumblr, there's a much shared post from the creator about his experience working at Marvel Comics on the Iceman series. While it's easy--and correct--to criticize the people in charge of things at Marvel for being fundamentally lousy at their job and offensively stupid, it's often something you can only reckon with by pointing out how bad most of their comics are, and how gross most of their employees act on social media. Having someone like Sina come along and give you the actual receipts--that's the stuff!

Over at Longbox Coffin, you'll find an article on Alan Moore's Supreme that nails it about as hard as the truth can. Stick around for a guest appearance of a TCJ regular, and then say Happy Birthday. Happy Birthday, Brian!

Over at Ink Logging, Tom Kaczynski has his take on Silver Surfer Black #1, a recent Marvel comic I also purchased and read. Like Tom, I was also impressed with the splash page that is framed with the Surfer's smooth non-penis dead center.

Tom of Finland is gearing up for a special birthday! 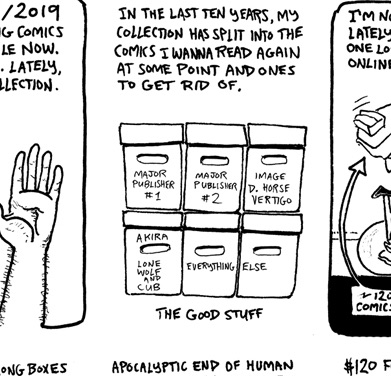 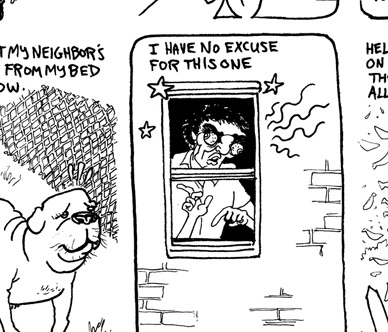