R. Orion Martin worked for a time as a translator in China, where he found a burgeoning underground comics scene. He has since published fascinating minicomics translated into English and has partnered with the stalwarts over at kuš! as well. These comics feel familiar in appearance and subject matter for American alternative comics readers, but also strange and original. Martin has noted that while a number of Chinese artists looked at manga and manhwa, they either didn't feel like they could draw in that style or it simply didn't speak to them. When they got hold of European underground comics, that proved to be a game-changer. Let's take a look at a few of these unusual comics. 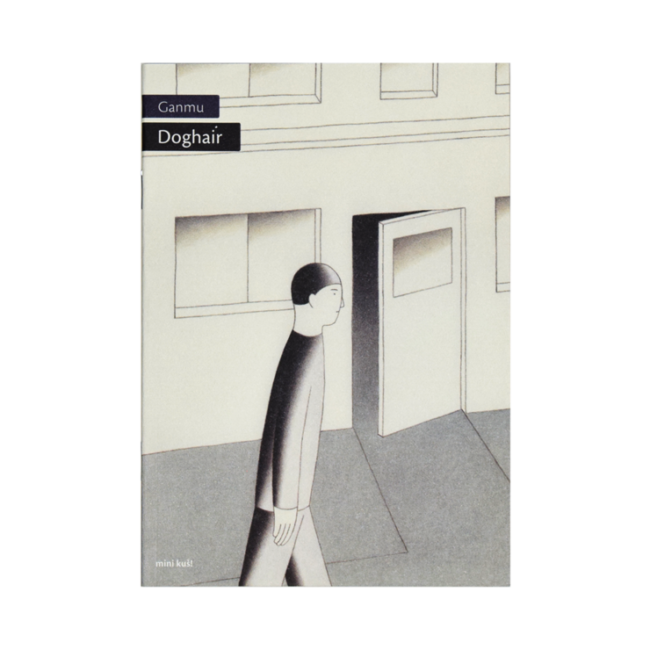 Ganmu: mini-kuš! #71, "Doghair." There's a strange, simple precision to Ganmu's work. It conceals emotion but provides subtle visual cues to what's going on. This comic is a love story of sorts, but Ganmu subverts expectations about a jealousy storyline and instead focuses on a man's intense affection for his dog. He's utterly indifferent to his wife's pleas to help out more and indifferent to her in general. Ganmu uses some exaggerated close-ups to portray the man's extreme tunnel vision with regard to his dog--even when it's clear that his wife plans to cheat on him with a man she meets right outside their building. After panel after panel of quietude, the protagonist sees his wife outside walking the dog with the man and springs into action. There's a moment of tense confrontation before we are shown the real reason why he ran--and it wasn't because of his wife. The use of various shades of gray with some black creates an almost unbearable portrayal of desperate tedium. This is a horrible life for all involved, but it's clear that the real victim here is the protagonist's wife, who's living a life desperate not just for affection but any recognition of her humanity. This is a grim comic that plays up its (at times) cute simplicity and hammers home a sense of inevitable emotional drabness. 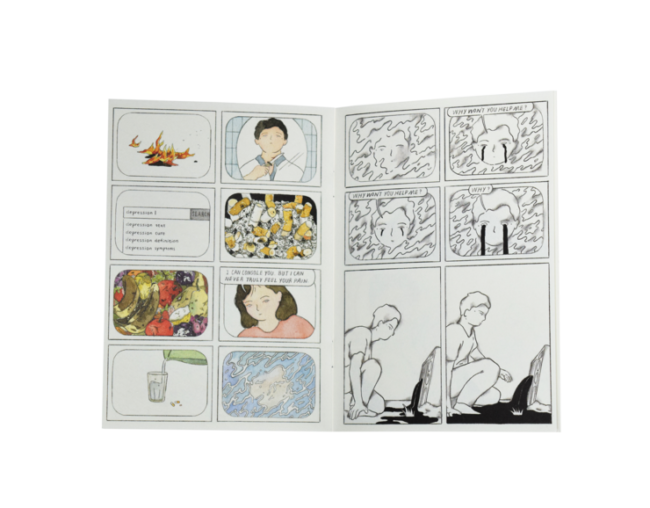 Fenta: mini-kuš! #72, "Beyond A Cure." This feels more Western than the other comics here; indeed, the fine and fading line at times looks like something out of a C.F. comic. This is a harrowing account of crippling depression, self-hatred, suicidal ideations, and fighting one's way through all of it. Fenta uses a different grid layout on nearly every page, reflecting the restless and unsettled quality of the narrative. The story begins with a man helping another version of himself out of the bath and then requesting his aid in his own suicide. This is a comic about deep isolation and attempts to break through it via receiving both encouraging and frightening messages from television. There's an elliptical quality to the storytelling as themes and images are repeated and the end loops in the beginning from a different point of view. 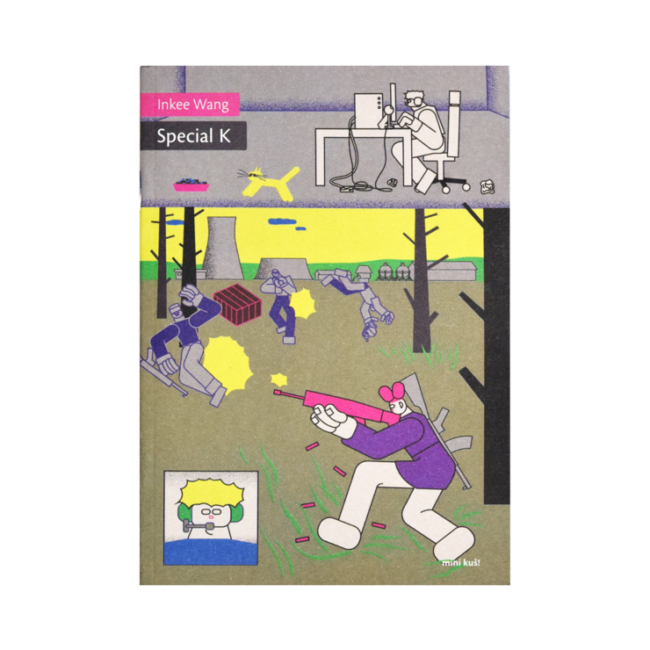 Inkee Wang: mini-kuš! #73, "Special K." If Fenta and Ganmu double down on minimalism and gray tones, then Wang goes as far in the opposite direction as possible. This comic is a constant visual assault, with characters constructed from bloggy, blocky shapes, with deliberately stiff movements and poses. This reminds the reader that all of this was drawn on a computer. It makes sense contextually since this comic is about a famous video-game player, the huge audiences he racks up as he records hundreds of kills in a war video game, and his eventual fall from grace. Wang gets to the heart of the strange and almost intimate relationship between internet figure and audience, as the titular "Special K" has thousands of attentive fans. In the middle of his most triumphant moment, word spreads that he was cheating the game. Not only does that cause his own downfall, but it also makes the game irrelevant--and all of the social groups surrounding it. There's a hilarious scene at the end that reflects peace breaking out as a result of Special K's shaming, commenting on the nature of this culture and how culturally limiting it can be. 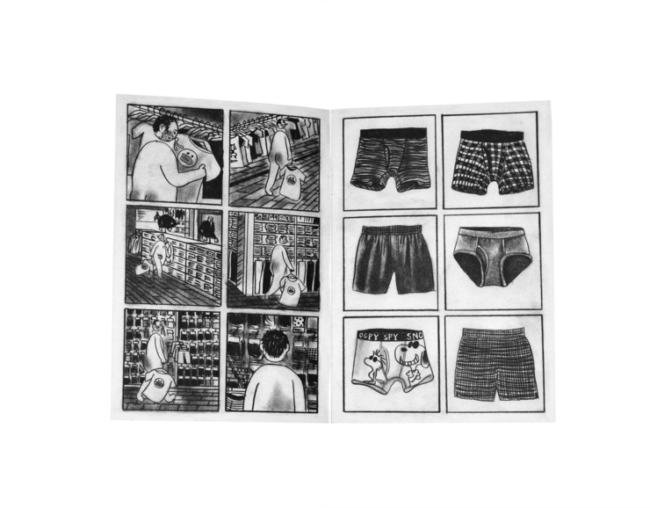 Yan Cong: mini-kuš! #74 "UNIQLO Superman." There are two stories in this one, both with mundane and fantasy elements. The titular story is about the ways in which extreme and atypical behavior can be ignored in public. That's especially true in commercial spaces, and this story features a naked man walking into a clothing store. There are entire pages filled with shirts that potentially could be chosen, as though the book were a video game and the man is pulling items off of a list. It's reflective of the man's experience, though, flipping the reader through his choices at a fast clip. He gets what seems to be an odd collection of clothes, including underwear but no pants. All of this strangeness leads to an absurd ending, albeit one that makes sense in the context of the story.

The second story, "Chorus of Frogs", inverts the fantasy/mundane ratio, as it's about a frog-man married to a woman. This visually absurd element is subsumed into the story, which is about him becoming increasingly distant from his wife. There's no resolution or reasoning behind it, other than a hint about his frustration with his work. Instead of reaching out to her for support, he retreats behind isolation, taking solace only in reading a comic in bed as his wife is trying to sleep. The visual style combines mundane and scratchy elements with small, strange flourishes, such as every character's head floating over their bodies. 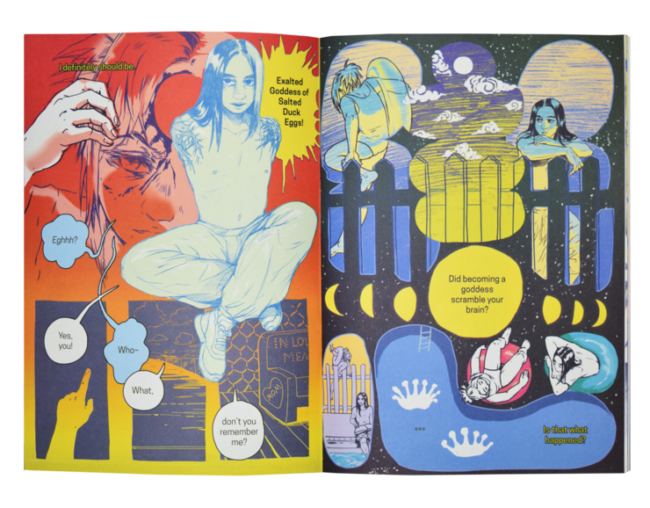 Ellipsis, by Diane Zhou. This one's published by Martin's own Paradise Systems shop. Zhou currently lives in Brooklyn. Every aspect of this comic is a radical departure from the other comics in this article. Zhou's line and style are more similar to manga than the other Paradise Systems artists, although her use of color in this fantasy story is relentlessly expressive and stylized. This is a story about a woman who dies and is turned into a goddess. An armless man asks her to restore him. It's a strange, unsettling story with a dark ending.

At its end, Zhou reveals her process: she took a photo of a table in her grandparents' house. She fed it into Chinese-language Optical Character Recognition (OCR) software that converted the images into characters. Zhou created relationships between those characters and built the story around them. This is a comic along the lines of an OuBaPo experiment, where the story's constraints become part of the story itself. It's a testament to Zhou's skill as a storyteller that the seams don't show (so to speak). Indeed, she goes above and beyond with ambitious page layouts on top of her dazzling use of color.

This is a fascinating movement in comics. The upcoming Naked Bodies anthology (debuting this fall after a successful Kickstarter campaign) will feature a number of these artists and could be the book that draws more attention to this burgeoning movement. To be sure, the artists face a number of censorship issues in China (including not being allowed to draw nudity; it's no accident that a couple of the comics here feature casual nudity), so having this foreign outlet has been important for them. I'm excited to see how they continue to develop. 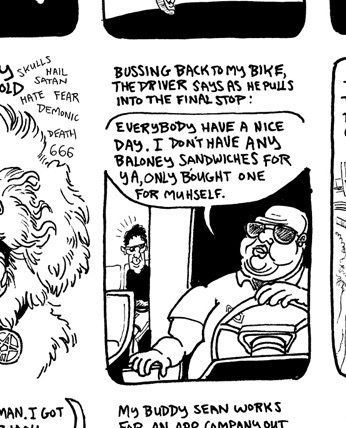 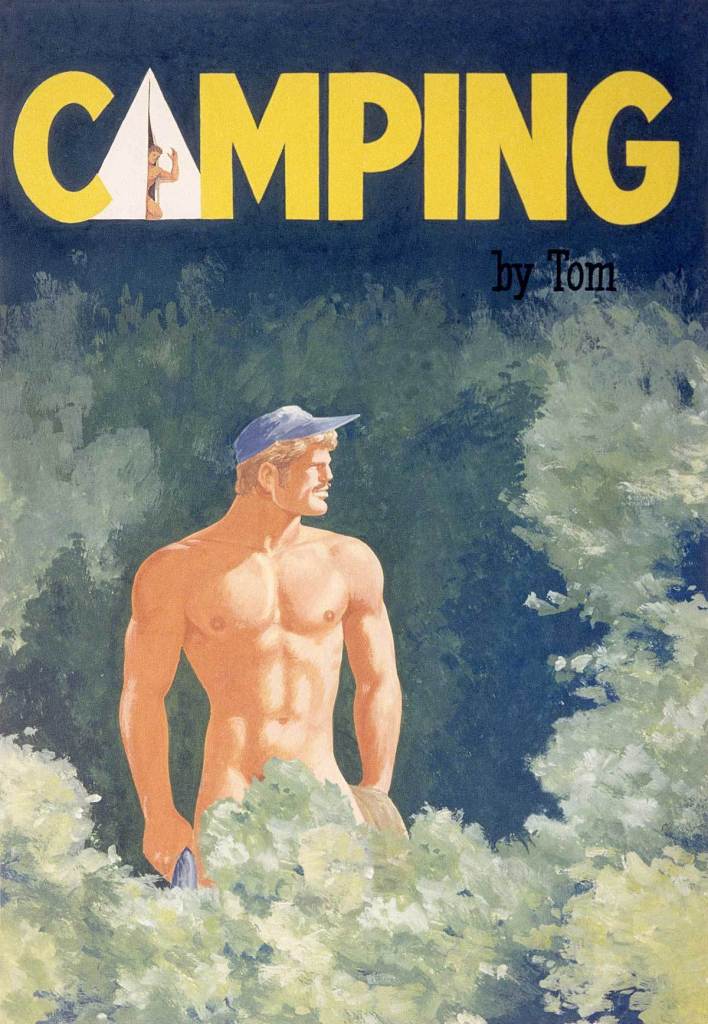