This is a short excerpt from Gary Groth's career-spanning interview in  The Comics Journal #303.

Tomi Ungerer has been an artistic force of nature for more than 60 years — a cartoonist of international repute, a best-selling children’s book author, a painter, a prose writer, a sculptor, a political dissident and a sexual revolutionary. He has, by his own account, published over 140 books. There is a museum in his name in Strasbourg. Animated adaptations of his work are currently streaming. He is the subject of a 2012 English-language documentary, Far Out Isn't Far Enough. Maurice Sendak, his contemporary, called him "a marvelous cartoonist."

If you are an American reader and have not heard of him — or are only glancingly aware of his work — you are not alone. He has apparently been persona non grata in North American publishing circles for nearly 50 of those 60 years — although, to be fair, the feeling may have been mutual. He has been published consistently in Europe by his long-standing publisher, Diogenes, throughout much of this time — but rarely in America. (Phaidon has, over the last half decade, republished many of his children’s books.) It is, frankly, shocking to think of an artist of Ungerer’s stature and achievement being so little known in the country in which he originally made his mark, but it’s true. I welcome the opportunity to introduce him to new readers and to rejuvenate an appreciation in those who have known his work for decades.

GARY GROTH: Do you prefer your writing to your drawing?

TOMI UNGERER: Yes. Definitely, by far. I’ve never been really satisfied with my drawing. It’s always so scattered! I’m a jack of all trades. What am I? I should have just picked up one style and developed it. My drawing is all right. I know I’m known for that, but I would say I prefer my writing the last five or eight years.

You’ve talked about how there’s no demarcation between your writing and your drawing.

Don’t you think that when you’re drawing, in a way you’re also writing?

Yes, definitely. In German, aufzeichnen is taking notes and zeichnen is to draw. And so, I said, “OK, translate it in English, that’s my answer.” I draw what I write and I write what I draw.

When you see my sketches, I do a sketch in my sketchbook and then all the lines and the things. And when I write, strange little aphorisms and stories, they’re completely unrelated. I jump from one language to another, from one subject to the other. You would think, “This is impossible that this was written within the last five minutes.” It’s completely unrelated. I don’t know where it’s coming from, I’ve no idea. It just comes and hits me. Pop and voilà! 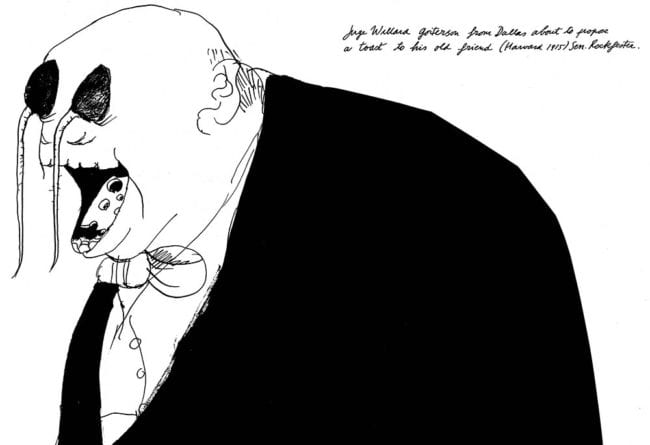 When you were putting together The Party, did you conceptualize that as a whole? Did you go into it thinking, “I’m going to make this book?”

No, I was in Long Island, in East Hampton, where I had this big villa. I was always well-advised by my Jewish friends. And in Long Island, they had a society magazine called The Hamptons where they relate about a party and all these rich bastards. I did some sabotage work. I’m an agent provocateur, you see. In Long Island, there was this magazine, and I got hold of some of those issues and I saw those fucking things. These people at a party and so-and-so was there and so-and-so was there. So that inspired me and I said, “Fucking bastards.” [Groth laughs.] And in those days, I was married to a woman, Miriam, who died three years ago. A fine woman, really. And she liked partying. But from the moment I divorced her, I never had another party. Never had another party ever. I hardly even went to a party again. I’m a loner, I’m a loner. I never joined a political party. No, I did politick once for Willy Brandt.

But that doesn’t mean that I was a Democrat. I was always basically a socialist. But otherwise, I once joined the PEN [International] club for a while. I should have stayed, it was a good organization. But otherwise, I’m like my mother, my mother never joined anything.

Regarding The Party. What outraged you so much about that milieu?

At what? Why were you so angry?

And their star fucking. If they can have a famous artist or a famous something there, they love that. Oh, I took my revenge on a lot of them. One thing I did a lot of times, when I was in Long Island, I broke into these people’s houses when they were not there and spent the night there. One night I went with my wife and I remember this big mansion. I’d been invited there, and there was a hose in the front of the garden, in front of the main door. It was 2 o’clock in the morning and I rang the bell and the light went on and finally, the guy came down. Of course, he didn’t recognize me in the dark and he opened the door and I had his own hose with the water jet directly in his face. [Groth laughs.] And then we scrammed. By the time the police came, everything was gone, the water was gone.

And you did things like that because you were so angry?

Yeah, it was straight out of my anger. I can tell it now. I don’t care anymore. The things I would have gone to jail for, I’m not telling you. [Groth laughs.]

Well, you could, because the statute of limitations has run out. I think you had a huge house in the Hamptons.

A huge villa, yeah, one of those mansions. The irony was that I was in a house just like those!

Yes, right, that’s what I was going to say.

And then, what did I have as a car?

I got a second-hand Bentley!

You were driving your Bentley to and from this huge mansion. Now, was this a way of you saying, “Fuck you, I can afford —”

No, I would drive in the middle lane on the highway with my Bentley and a girlfriend of mine on her knees in the front seat with her behind flattened on the front window. And every car would just swerve around the line when they saw that. [Groth laughs.] I mean, I could have been arrested. The accidents, can you imagine the guy looking there who goes [whistles].

Right. But you’re buying a Bentley, and a Bentley represents —

A second-hand Bentley, of course. Excuse me. I couldn’t afford a real Bentley.

But you were doing very well, then.

I sold it for the same price to the mafia.

One of my neighbors in the ’80s was a mafioso and had been arrested. And I was Mr. Tom, I was Mr. Tom. And, you know, he had children. I used to go and play with his children, gave them children’s books in exchange for watching my car; I could actually park my Bentley anywhere in New York. There was always somebody watching over it. I was watched all over. And then one day, he says, “Hey, Mr. Tom. Everybody’s got enemies, right? Everybody’s got enemies. You’ve got enemies. We take care of everything. An arm, a leg, an eye: $250. Kill: $500.”

You also had a Winchester that you would fire over the heads of partygoers.

Yeah, I took it to Canada. I had it when I came to Ireland. It had a high velocity.

That sounds a little dangerous.

Well, I mean, it was a gun. I remember, across the street, there was the son of Max Ernst, who was an artist too. But he was all chicky-nicky. And I had white columns like a southern mansion. And sometimes I had my sex slave tied on it and then when he had a party, I would be there in my rocking chair with my Winchester and just shoot a bullet over their heads. [Laughs.] Nobody complained! And then my neighbors up the way had a big, beautiful brass fish [statue] and I riddled it with bullets. I think I would have been the perfect anarchist. We have too much discipline. You know my triangle of life? It’s very important. It took me years to do it. It’s a triangle with variable angles and one is for discipline, one for enthusiasm and one for pragmatism. And if it’s a rubber triangle under the pressure of goodwill, you get a pyramid. But not too much goodwill, because otherwise the rubber is gonna burst like an old condom.

I’m in another world right now. But I was sick. You see, the biggest frustration with age is the energy. Anyway, tomorrow morning I can show you my next book. My publisher cried. Not only cried — sobbed. Five people started crying. I’m perfectly happy, for the first time in my life. I showed two Malparti stories to my son. He said, “Dad, that’s a fucking best seller.” I don’t know.

You said that for the first time in your life, you’re really happy?

With my work, yeah. No, I never was happy in my life.

You just said that you were happy for the first time in your life.

I’ve never been happy but I found some joy. You know, it’s all relative. But in Ireland, I found the place where I belong. But I felt that way in New York, too, when I arrived there. But Ireland gave me peace. I found the kind of society I can live in. I told you already it’s the one society I know of where there’s no arrogance and where you feel no difference between social classes. And there’s a great sense of humor, this is what I like about Ireland. And in a way, with Ireland, I found the place where I felt I belonged. Away from the whole Franco-German back and forth, and it’s an island, too, you see.

Well, anyways that’s the way I feel. My wife and I both felt that way when we arrived in Ireland. You read my book about Canada and there was no way we would want to create a family there in such circumstances. And everybody, like my old friend Brian Moore, the novelist I was close to, was talking about Ireland. So we went here, we found this place, and we came back a few months later when Yvonne was eight months pregnant. We came with six suitcases just to be sure that our first child, Aria, would be born in Ireland. And that’s been 45 years ago, so I’ve spent half my life in Ireland and I’ve never regretted it a minute.

Yes, I do find joy. It is more an elation. I’m elated when I work on a project and then the moment a book is printed I’m just overtaken with … I cannot spend my whole life correcting every drawing I’ve ever done. It’s all relative. But my work is my refuge. As I said, it’s my sanatorium. I keep my sanity thanks to my work. 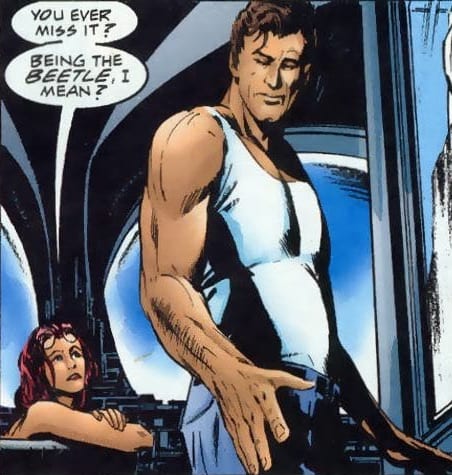 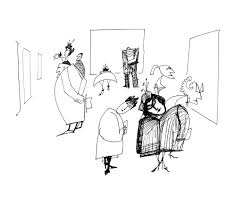