Today on the site, in honor of the release of Sugar Skull, we're happy to republish Darcy Sullivan's comprehensive (then) 1992 interview with Charles Burns. Here's a taste:

SULLIVAN: What other markets were you breaking into at the same time? You did get into Heavy Metal. When did that take place?

BURNS: Around 1982 or ’83. It didn’t pay great, but it paid, so that was nice. The El Borbah strips were serialized in there, and at that point I was starting to take the strips that appeared in Raw and sell them in European markets. That was where my other income was coming from. But it was a trickle, it was very, very gradual. I was trying to get a strip in The Village Voice, and I had a little one-panel strip that appeared in the The Rocket [a Seattle-based rock tabloid] for awhile. A couple of them got reprinted in that “Raw Gagz” [#8]. They were dumb one-shot gag cartoons. I wasn’t very comfortable with that, to tell the truth. I had made up a bunch of samples, and I was supposed to get this space on the back of The Village Voice, because supposedly whoever was doing that was going to be booted out or something. There was something weird there. I was talking to the editor about it, and he was encouraging, but I was never very happy with what I had come up with.

At that point Art Spiegelman was working for Playboy, and that was really big bucks. I remember trying to create a one-page strip for Playboy. It was kind of a romance throwback. I just never could get it. Art was trying to help me: “You’ve just gotta think about what Hugh would like.” And I never could figure out what Hugh would like. My stuff was still much too weird for them. I had a strip called “I Married a Maniac,” about some woman who’s chained to the bedpost, and she’s washing dishes. Their response was, “Uh, Charles, you’re not quite getting it. The guys who’re reading Playboy don’t want to think of themselves as sexist pigs. They’re not going to think that’s too funny.”

SULLIVAN: You were critiquing the Playboy ideal.

BURNS: Yeah. Then I was trying to throw in this sexy humor, but I just could not get with it. It was really lame.

BURNS: Well … I was too embarrassed. I ended up doing stupid stuff. A woman comes home and her husband’s in a giant bunny outfit, and he says, “Come on, honey, can’t you get in the mood?” Just real stupid.

SULLIVAN: How did Art feel about working for Playboy and trying to meet that Playboy ethic?

BURNS: He was doing it for the money. It was one of the games in town. He was smart enough to figure out how to play by their rules, and did it. I think it was fairly painless for him. But it was pretty painful for me.

We also have Daniel Kalder's review of The Final Incal.

The original Incal is a tough act to follow- so esteemed in some quarters that Humanoids were recently able to charge $79.95 per volume (that’s for 48 pages of art in their luxurious “coffee table” format) and find an audience for it. That’s almost $500 for six books, which have been published many times before over the last three decades. But Final Incal is also a damn entertaining read, with pretty spectacular artwork by Ladrönn, and quite good artwork by Moebius. (The aborted volume of After the Incal is appended at the end, cleverly giving the book the same circular structure as the original Incal series.)

The longtime editorial cartoonist Tony Auth has passed away at the age of 72.

Heidi MacDonald has a story and video about/of Simon Hanselmann's "marriage to comics".

Here's the latest interview with Drew Friedman over at Gil Roth's site.

Pretty interesting piece here about an old Canadian comic book coming back into print, and with a rather illustrious artistic lineage, too.

Finally, here are some thoughts on Jerry Moriarty, who is often worth thinking about. 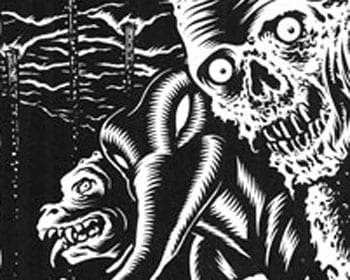 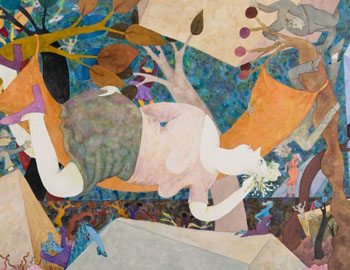