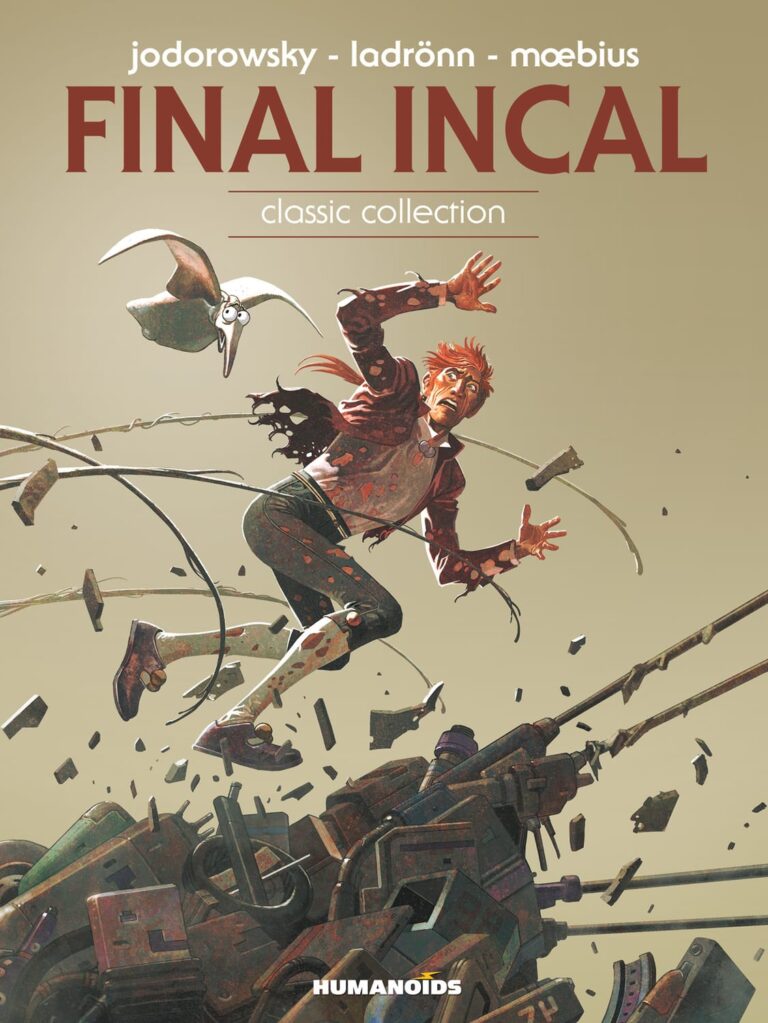 At the climax of Moebius and Alejandro Jodorowsky’s original Incal series, the protagonist John DiFool encounters God, or somebody very like him: a big, golden, flowing-beareded divine being named ORH. ORH then changes into a cosmic baby as the universe is reborn, a universe-shaking event it is DiFool’s duty to witness. Alas, DiFool promptly forgets all about his divine encounter, and instead finds himself hurtling towards certain death in the acid lake that lies at the bottom of the futuristic dystopia of the “City Shaft” … which is how, in fact, he began his epic quest—as a lowly, unenlightened, drug-addled, "homeo-whore"-banging class-B detective.

As far as endings go it’s pretty big, not to mention elegantly circular, and so when I learned that Jodorowsky and Moebius had attempted a sequel to their legendary metaphysical-satirical space opera a few years ago, it was difficult to imagine how they could have taken the story forward. And in the end, they didn’t—a “tired and ill” (according to Jodorowsky) Moebius left the project after completing a single volume; and Jodorowsky didn’t even like the art his longtime collaborator had produced anyway. After the Incal was stillborn, and it lurked in the bowels of Amazon.fr like a pickled mutant baby in a jar for years, a curio at which I would occasionally stare in wonder and confusion.

But the ferociously inventive and exceedingly tenacious Jodorowsky is not one to abandon ideas easily, and just as the original Incal and its many spin-offs exploded out of concepts he had intended for his legendary aborted Dune movie, so he took the ideas he had developed with Moebius for After the Incal and reworked them with another artist, José Ladrönn, as Final Incal. And just as Incal and The Metabarons owe a lot to Dune but are not Dune, so Final Incal is not After the Incal, as Jodorowsky and Ladrönn decided to rework the story from scratch. And now, after many delays, and the death of Moebius himself, the series is complete and available in English translation from Humanoids. 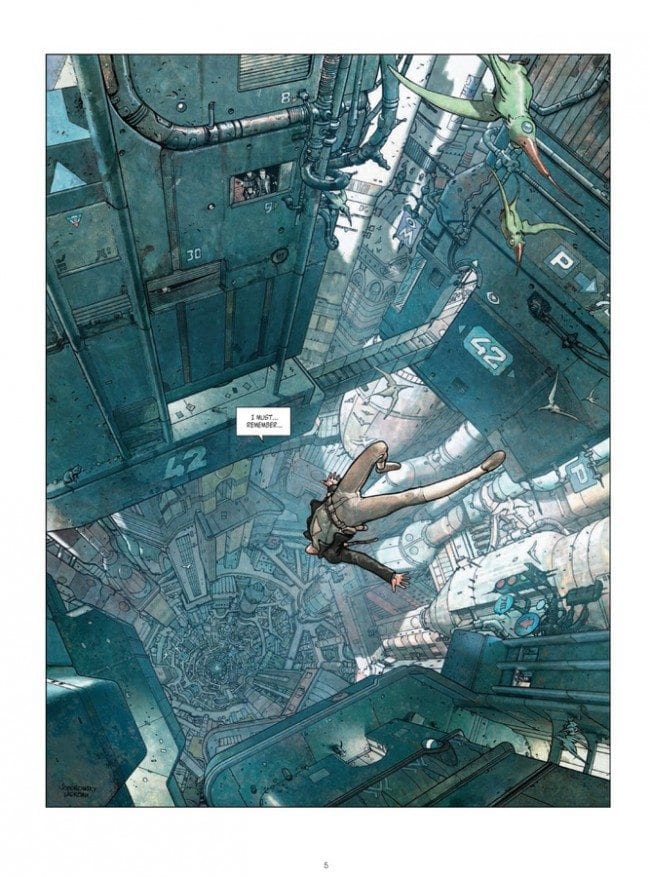 But is it any good? The original Incal is a tough act to follow- so esteemed in some quarters that Humanoids were recently able to charge $79.95 per volume (that’s for 48 pages of art in their luxurious “coffee table” format) and find an audience for it. That’s almost $500 for six books, which have been published many times before over the last three decades. But Final Incal is also a damn entertaining read, with pretty spectacular artwork by Ladrönn, and quite good artwork by Moebius. (The aborted volume of After the Incal is appended at the end, cleverly giving the book the same circular structure as the original Incal series.)

Indeed, Final Incal includes all the things you might expect to find in as Jodorowsky comic: metaphysics, archetypes, a remarkable sustained narrative intensity, berserk inventiveness, parody, self-mockery, violence, sex, a plot that does not always make a whole lot of sense, plenty of dei ex machina, and of course, gratuitous bad taste. Indeed, I would single out the image of the plague-ridden baby erupting in boils in the bottom right panel of page 31 as an illustration of Jodorowsky’s remarkable creative vitality. Remember that the great man is now 85 and worked on Final Incal his eighth and ninth decades while juggling multiple other projects on a schedule that would exhaust men a third his age. And while many writers might, for instance, decide against asking their artist to directly depict a wailing baby succumbing to a hideous plague that dissolves its flesh as its hideously ugly flabby mother erupts in green boils nearby, Jodorowsky just goes for it. More than that, he dials the bathos of the traumatized-mother-with-the-orange-mohawk up to such an extreme that the whole scene is actually pretty funny as well as horrible.

There is, then, in Final Incal, no hint of a dulling of the edge, nor any softening of Jodorowsky’s aesthetic. The maestro still delights in shocking his audience; he still loves mutations and deformity, but he is also willing to be utterly brazen in delivering an alarmingly naïve message (only true love can save us from turning into unfeeling metallic beings, man) just as he was completely unembarrassed about introducing us to a giant golden god-baby at the end of the original Incal, or dressing like this in The Holy Mountain.

But Final Incal is quite different in tone from The Incal, and it is much more modest in its metaphysics. Sure there is a “vegetable vagina” inside a cosmic robotic earth tree thing, and there is a weird cosmic “angel” squid called Elohim, but the “Incal” itself, a mystical divine darkness/light principle only shows up occasionally, as if Jodorowsky forgot all about it. There is also an extremely funny sequence in the second volume of Final Incal in which multiple John DiFools from different realities encounter each other. They all exist at different states of enlightenment; Jodorowsky merciless ridicules the ego of the allegedly evolved guru DiFool and brutally strips away the pretensions of the super-evolved “angelic” DiFool. In fact, it is the least enlightened DiFool, the ugliest and most craven, who is selected to save the universe. The handsome John DiFool we were introduced to in volume one of Final Incal- who is the ORH-encountering John DiFool from the original series- vanishes at the start of volume two. In his place, the John DiFool from the prequel Before the Incal takes center stage. (Though this being a Jodorowsky comic, he absorbs the essences of the others first.) 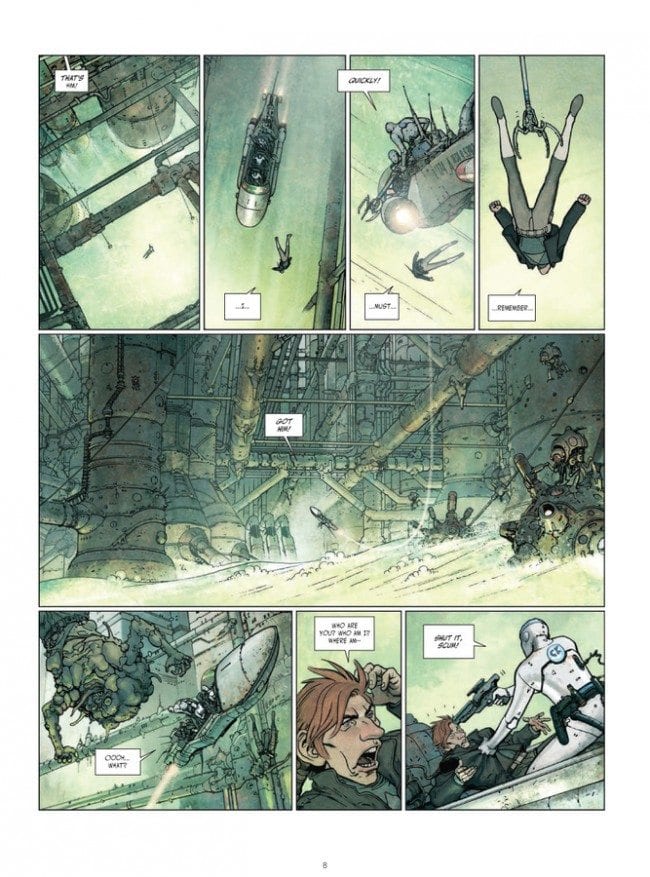 Perhaps Jodorowsky has changed his attitude to cosmic matters since he worked on the original series. But I also suspect strongly that Ladrönn might have something to do with this relative metaphysical restraint.

Ladrönn’s art in Final Incal is a revelation. If in After the Incal you have Moebius- who was arguably the greatest cartoonist of his era- drawing at considerably less than the height of his ability, then in Final Incal you have Ladrönn, a really excellent artist, pushing his considerable skills as far as they will go. I have seen images of Ladrönn’s early work online and he did a good Jack Kirby impersonation, no doubt. But in Final Incal his work is so far beyond that pastiche, so much more advanced that it looks like the work of an entirely different, much more gifted artist.

When Moebius draws the plague scenes in After the Incal, the effect is bizarre, and not in a good way. People with Smurf eyes turn green and explode; the only thing that’s missing is a “kablooey” sound effect. It’s wildly strange, ridiculous in fact: without the horror that Ladrönn brings it falls flat. When Moebius depicts the dissolving baby, he shields us from the shock of its visible dissolution. We see the mother’s back and some legs, and to judge by the length of them, the kid is older. We cannot see its little arms pumping as its flesh erupts in green spurting buboes. Perhaps Moebius thought this was all too much; he undermined the plague scene with overt humor and an apparent aversion to depicting plague baby death. Ladrönn however is willing to take things as far as Jodorowsky wants him to; perhaps indeed, to make them even darker.

So too Ladrönn’s rendition of the worlds that Moebius designed in the original Incal is much grittier. His streets are much emptier than the ones Moebius drew, less colorful, more muted. He excels at drawing androids, cityscapes, huge spacecraft, inhuman things, but as if he has studied not only Moebius but also the movies that Moebius influenced, directly or indirectly— Blade Runner for instance— and absorbed their dystopian aesthetic, feeding those interpretations back into the original template. Perhaps he’s read a pile of Judge Dredd comics too. 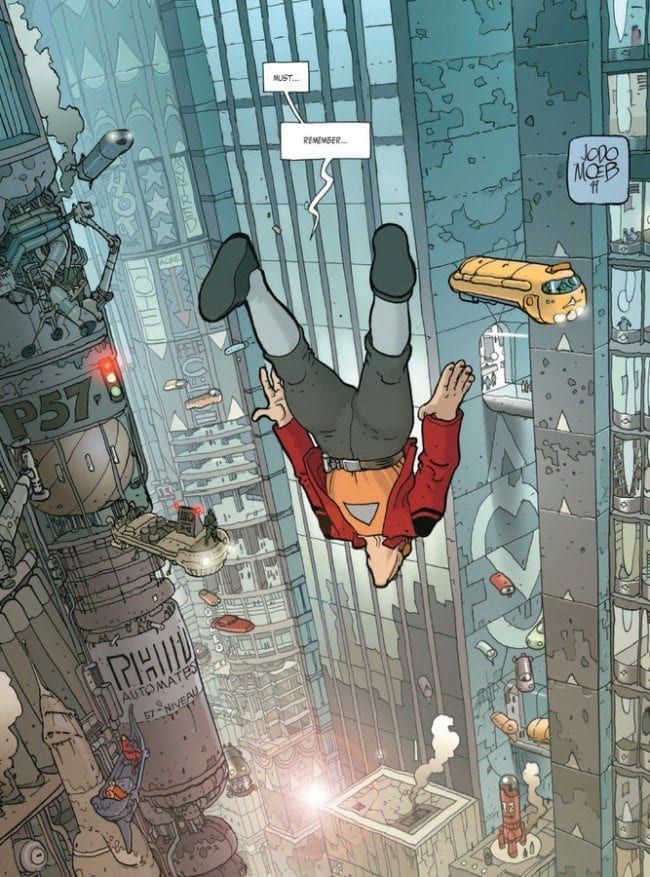 He also has none of Moebius’ own cosmic/New Age-y interests. Remember: Moebius really liked to draw crystals and he even illustrated an edition of Paulo Coehlo’s vacuous, pseudo-spiritual bullshit jibber-jabber quest novel The Alchemist. The quasi-religious tone of the original Incal was not just Jodorowsky’s doing, and some of that “spirituality” returns in After the Incal: when DiFool is rescued from the plague-infected crowd, his savior is a wise, seemingly omniscient little girl in a pink dress who them metamorphoses between panels, transforming into a sequence of impossible 3D geometrical patterns. Ladrönn by contrast draws a fucking giant mutant big that remains a giant fucking mutant bug.

In Ladrönn’s world, forms are final, heavy, old, rotting. Machines look heavy and space looks deep, and cold. Yes, Moebius was and always will be The Man but he was not the man for this story: Ladrönn was. And so while After the Incal is certainly an intriguing footnote, a glimpse of a path not taken, Final Incal is the real deal, a fitting end to Jodorowsky’s ludicrous, demented, magnificent epic, dissolving babies and all. 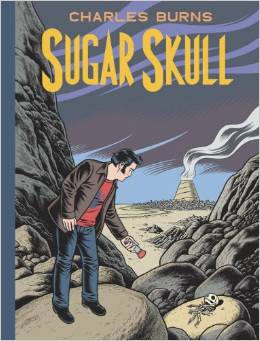 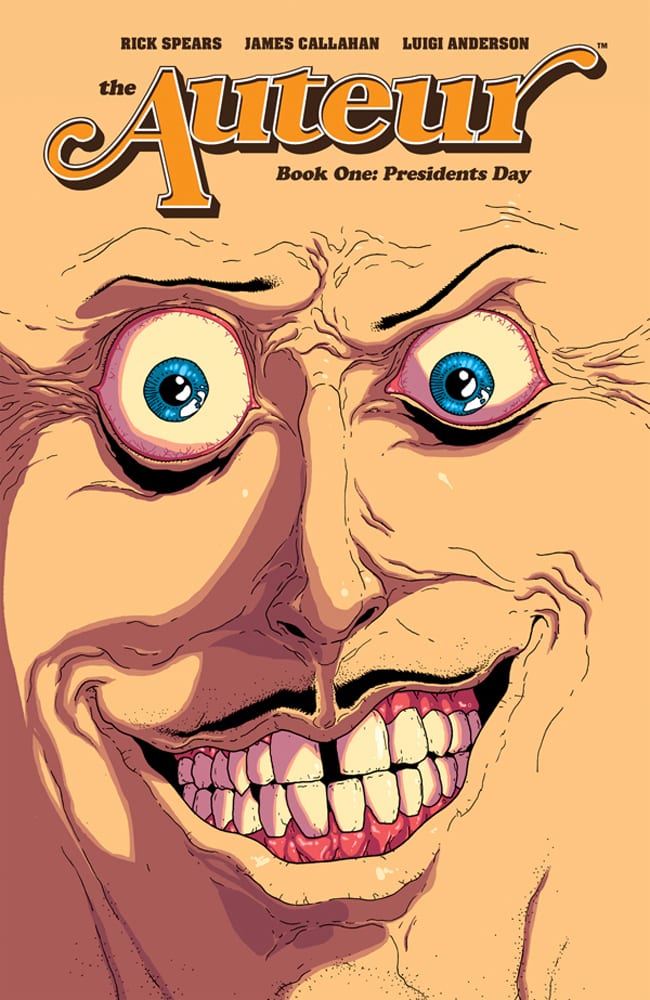