Ah, the day has come: Jeet Heer returns! New fatherhood couldn't keep him away forever -- read the latest of his inimitable "Notebooks" for Heer's thoughts following the Iowa Comics Conference, on topics including but not limited to Joe Sacco's stage presence, crying while reading Love and Rockets, dead cartoonists, Jack Kirby's versatility, the future of comics publishing, academia's recent narrow focus, the dunderheaded Clint Eastwood, and going drinking with Peggy Burns. It's good to have him back.

Also new on the site: Host Mike Dawson's recent promotional tour has ended and so he has turned in a new episode of TCJ Talkies, this time featuring Nothing Eve creator Kurt Wolfgang.

The Guardian takes the opportunity given by the new Stephen Spielberg movie to run a mini-Tintin package, with a Nicholas Lezard appreciation for the series (he calls the film "Tintin for morons," fyi), and a rundown of authors asked to do a Sophie's choice between Tintin and Asterix. (In the latter, only Tom McCarthy really has the guts to take a firm stand and defend it vigorously.)

Tom Spurgeon reacts to our recent Jaime Hernandez coverage, and the comments threads it spawned.

Ben Katchor is interviewed by The Browser regarding "picture stories," and he picks five of his favorites. As you might guess beforehand, it's a stellar list.

Charles Hatfield attempts to pick out a list of ten works representing the last decade of independent comics.

Finally, Dan and I went to the Housing Works Bookstore last night to see the Dan Clowes/Seth appearance. I've seen Seth speak before, and he's always very good (not to mention funny and self-aware enough to probably surprise most of his detractors), but this was the first time I've been to a Clowes event. He was as sharp and incisive as you'd expect, but had a warmer personality than you might guess, too. Maybe that had something to do with Seth's presence. Anyway, if you are interested in either of these artists, I strongly recommend going to one of these joint events if and when they come to a town near you. 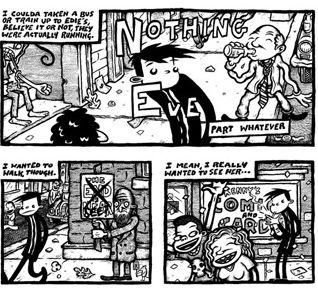 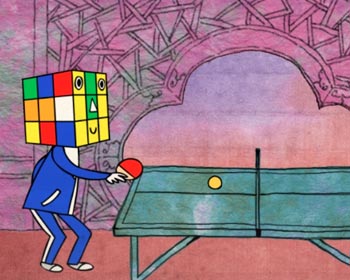