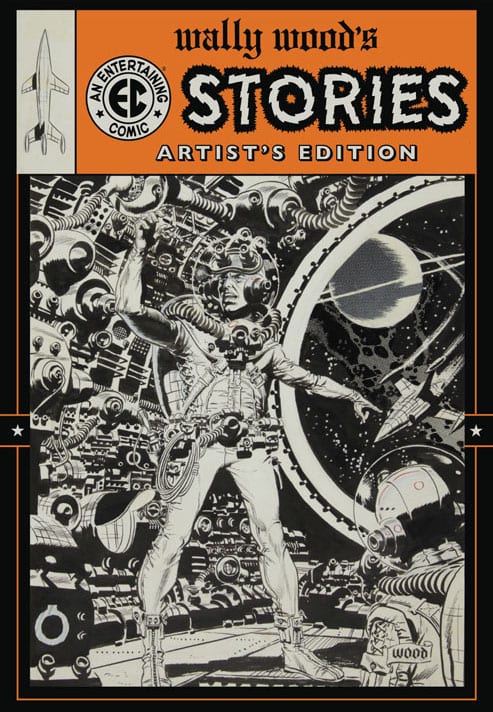 For a little while now IDW has been publishing a series of books consisting of actual-size color reproductions of original comic book art. The newest edition, and the only one I've laid my hands on (TCJ covered the Walt Simonson edition here, and there is also John Romita and Dave Stevens volumes) is by Wally Wood. It is easily one of the best books of comic art ever produced. It's like the first Little Nemo book that Pete Maresca produced: An entirely new way to look at a comic art great; it's also one of the finest books of drawings I've ever seen. It's gone into a second printing which'll be out in late May (pre-order it here). Wally Wood’s EC Stories: Artist's Edition contains a choice selection of his best work for EC's science fiction, adventure and crime comics, as well as a cover gallery, all drawn in the early-1950s while Wood was still in his twenties.

Here are a few thoughts:

1) The first time I opened it I thought: This is like a museum in a book. Like Marcel Duchamp's Green Box (no, seriously), it's a portable device for the transmission of artwork. What you get to spend time with is an artist fully immersed in his craft.

2) One of the crucial things about printing these in full color, as documents, is that you see the range in tones Wood was working in. Some blacks are blacker than others; brush strokes come to the surface; corrections, notes and cut-lines are all visible and additive; basically the entire history of each object sits there waiting for further consideration.

3) This is a fairly unusual way of publishing drawings -- usually you get a book of drawings and of course they're printed in color, but generally speaking they live inside white space, and your sightline is past the book. Not here. In this case the art dominates the book and absorbs all available views. It's a remarkable thing, actually, kind of like standing in front of an enormous history painting at the Met: You're in it.

4) And while it may sound nuts, Wood's work here has what can only be described as charisma. That is, the best artworks just radiate an energy -- it's that ineffable thing we respond to when standing in front of, say, a drawing by H.C. Westermann or a painting by Francis Picabia: It radiates feeling. Wood has that. If you respond to artwork in general, you can't not be effected by this.

5) The thing about Wood is that he was, of course, a master craftsman, but he was also a fan. He was, with enthusiasm and probably some chemical help, making the art he wanted to see. So unlike a lot of comic art, which is really meant to be read printed and colored, this work feels as though it's meant to be seen (as opposed to read) like this -- as drawing. Wood did not take shortcuts in this work -- he was rendering way past what would ever be legible in printed and colored form, which is why the comic books look a little chunky in places. Even the large and crisp Russ Cochran reprints still have areas of obscured detail. This says something about the quality of Wood-the-cartoonist -- that in some ways his early style was not the best suited for swift action, not like his later style was. But then again, this style, despite what it was used for (i.e. verbose, formulaic, but nonetheless enjoyable stories) is not really about moving the action along. It is, it turns out, about drawing. So there he is, just pouring every technique he has into sculpting bodies and forms. And the marks are shown as he drew them, which oddly does not demystify how he did it. If anything it's even more mysterious, as the present size reveals yet more detail and nuance. That said, I would be remiss if I didn't note that I'm also looking forward to smoothly re-reading the work as lines and type in the upcoming Fantagraphics Wood collection.

6) The image-heavy approach that comes to the fore in Wally Wood’s EC Stories Artist's Edition is partly why it's jarring to then dip into a Harvey Kurtzman-written story. A formalist, Kurtzman retrains in Wood's expansiveness, but in return Wood seems to bare down even harder on the nib, making inkier and inkier faces so that Kurtzman's filmic pacing achieves a kind of unbearable intensity. 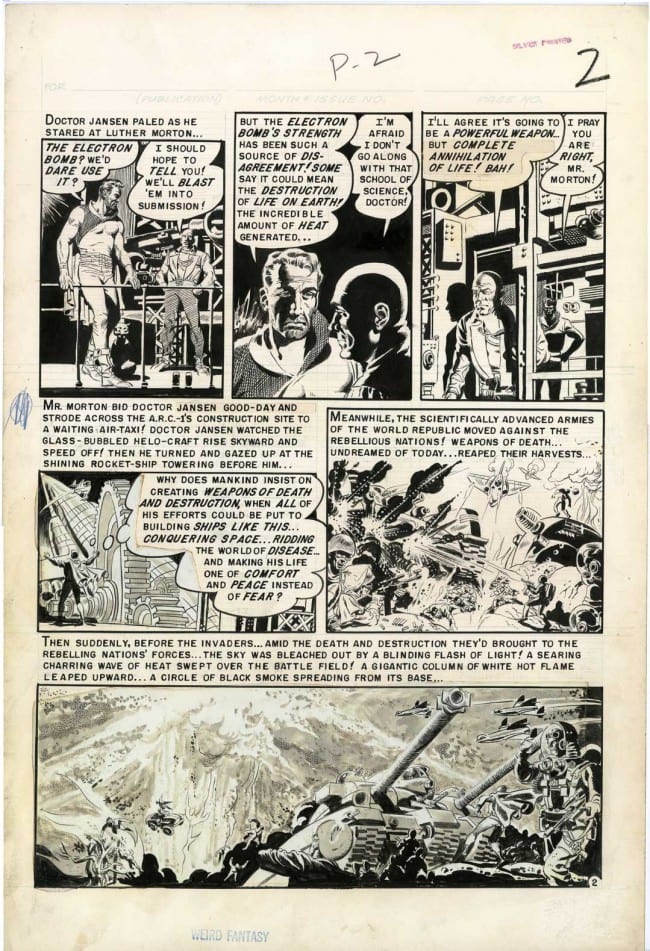 7) Looking at this work this large you begin to realize what a spectacular filter Wood was. Here was this fan taking what he could from pulps and comics and photos and so you get things like "Project… Survival" page 2, wherein Wood gets to draw four archetypes, and does so with admirable gusto: The tortured hunky SF hero; the bald SF scientist; rocket machinery; all out apocalyptic warfare. Each of these he makes his own -- they don't feel derivative so much as iconic. And in this large-scale ontext they becomes a group of drawings as much as a page, so that you can take in Wood's fevered images one at a time. These images would reappear in his work for the next couple decades; and not just his work -- many, many other cartoonists and illustrators. 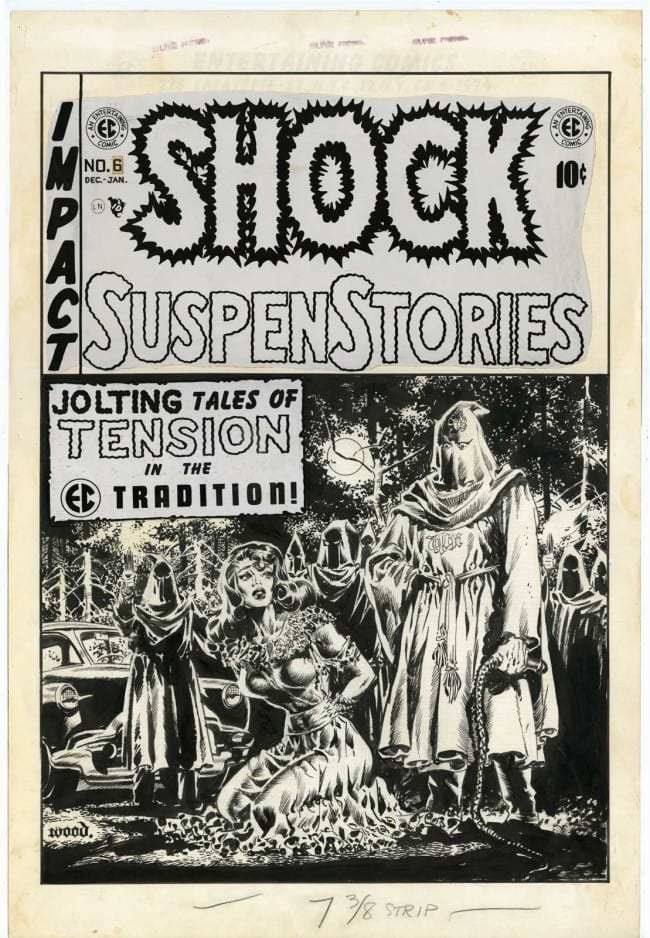 8) But Wood also belongs in the same category as someone like H.C. Westermann, someone drawing the American trauma. When you look at the full size art of Shock Suspense Stories No. 6 you see a really deep seeded evocation of the fear-aspect of "America" combined with an obsessive way of drawing: That looming klansman, who is fully 3 bodies wide; the ultimate pulp damsel, with her draped nightgown drawn into with a intensity that just seems absurd, really. There's no "realism" here, but rather a heightened intensity that I have to think was process-related more than trying to achieve any kind of final image. 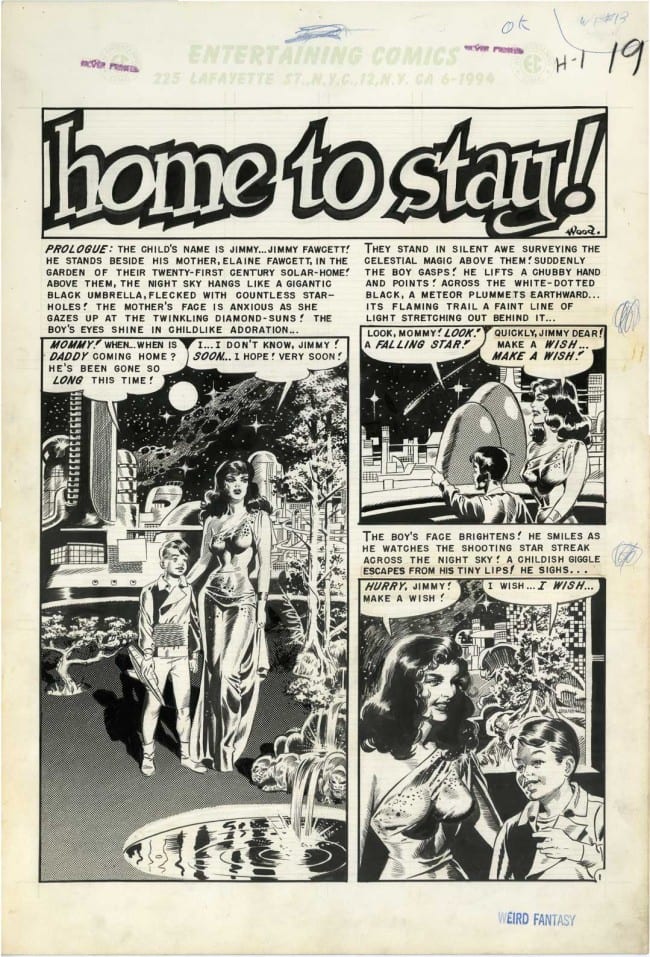 9) And then there's "Home to Stay", here printed so that Wood's incredibly sexualized matriarchal figure dominates the space, and the care he lavishes on her in each panel sets her off from the rest of the drawing. This page also offers a class on technique: Past her brushy hair is a scratchy shorthand pen line patch of clouds; then there's a precision-drawing architectural rendering of a perfect mid-century SF house; and then there's one of Wood's signature trees, which he always claimed to have modeled on Hal Foster's trees -- gnarled, some brush, some pen. The point is: These drawings open up worlds. 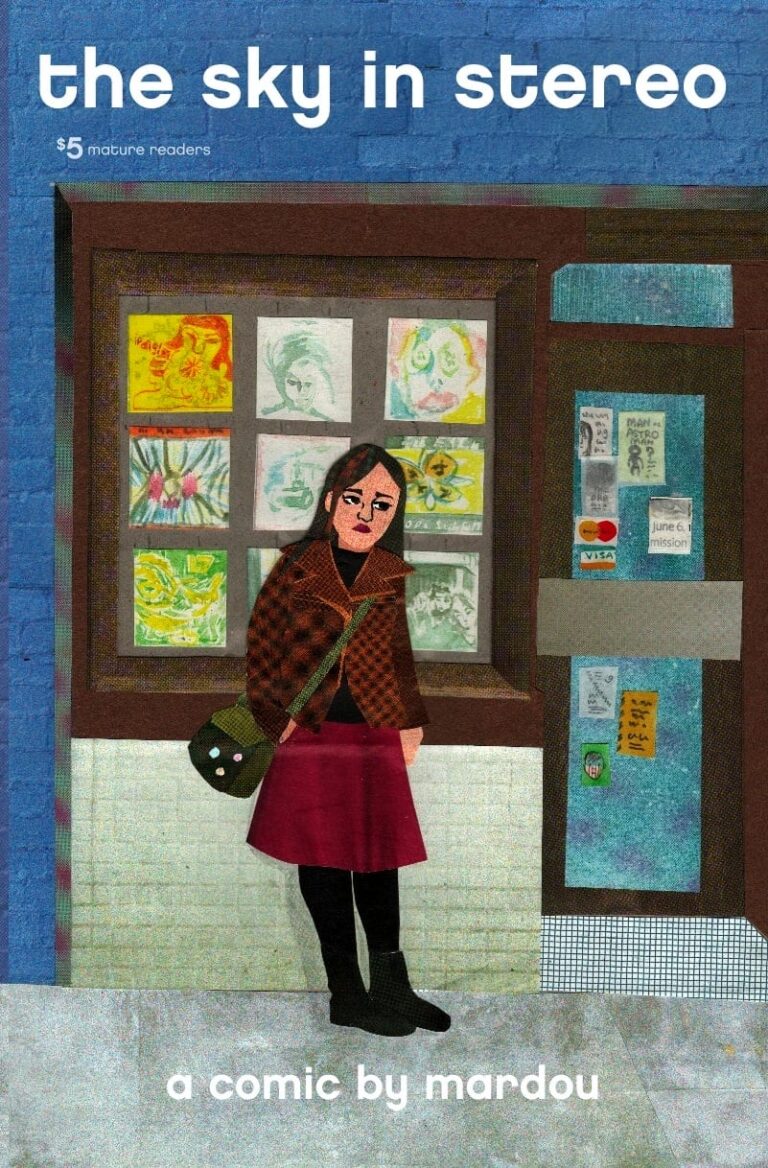