Adrian Tomine’s new book, The Loneliness of the Long-Distance Cartoonist, might be entitled “Loser’s Lament.” Although that would be a trifle deceptive.

Tomine’s memoir is engaging and wonderfully persuasive. But its success depends entirely upon our knowing that Tomine is a published cartoonist whose works (Shortcomings, Scenes from an Impending Marriage, Killing & Dying and the mini-comic Optic Nerve) are highly regarded. Despite that, his experiences don’t live up to his reputation—in his mind. He portrays himself as forever agonizing about one thing or another.

He has arranged chronologically a couple dozen or more stories of his encounters at book signings and other promotional events at which he is ostensibly the headliner, but he invariably learns that he isn’t the star he imagines himself to be.

Every event is preceded or accompanied by Tomine’s neurotic interior monologue, either imagining the worst or the best and then being disappointed when the event is simply humiliating.

His book signings are invariably failures: no one shows up. Tomine tortures himself mentally in advance, imagining mobs of people. Or not. Either imagining gives him grief. At one place, he overhears the bookstore owner on the phone, calling friends to have them come to the signing to which, so far, no one has come.

He’s up for an award, and he imagines what he’ll say when accepting it. But the award goes to someone else. “Don’t cry,” he says to himself. “Don’t cry.”

Finally meets Sarah, with whom he’s been corresponding for months and has never met in person (but who he will eventually marry). She accompanies him to a signing. After some humiliating confusion—he thinks a long line of people is for him but it’s for Neil Gaiman—they wind up in a different place and no one comes to get a book signed.

Interviewing Tomine at interview.com, Tavi Gevinson asks what is it like to draw yourself. Tomine laughs.

"Drawing myself has been second nature for so long that I didn’t really think about it. For the most part, I didn’t worry about the depiction of myself, but it was more about other people from real life that I depicted in the book. ... My older daughter ended up being the first reader of any of this material because she would come into my room and read the pages as they were in progress.

I thought that at a certain point she would just get bored with it, but of course as the book progresses, it comes closer to her appearance in the narrative. So she got more interested, and at a certain point, I walked into my room and she was sitting there and had actually found the notebook where I had the rough draft of the book, and was reading ahead into the rough draft to see where it went before I’d even finished drawing the real pages.

She would get a little technical about the chronology. Talk about a lie detector, she’d absolutely point out any distortion or slight fictionalization I did to material that she had been privy to, even things I know she’s too young to actually remember, but she’s heard us recount enough times that she could fact-check my comic version of it."

Fact-checking his stories would be difficult.

"The versions of the stories that are in the book have completely overwritten actual history in my mind — and at this point, I honestly believe that some of the slight distortion is reality. It’s probably a good thing that this is coming out at a time of no socializing, because I could totally imagine being at a party with Sarah, and me telling one of these stories, and her being able to say that I’m telling the fake version of it. And I could just imagine her thinking what a self-involved phony she’s married to now: ‘He’s not only retelling these same anecdotes, but now they’re revised in a way that he thought would make them funnier.

Fortunately she’s from an Irish family from Brooklyn, so she’s very understanding of distorting facts to arrive at a better story, especially in service of humor.

What was harder for me to write was the story where Sarah and I go to a Japanese restaurant in Brooklyn, and at the table next to us was a young couple, and the minute we sat down [I overheard them as] they began discussing one of my old books. The guy in the couple was such an eloquent and insightful critic of my work, and he just eviscerated it in a way that every single thing he said was like a dagger in my heart. It seemed to be speaking for what the general public was thinking, but was too afraid to say, and maybe even what Sarah had thought when she first read my book, but was too polite to say. To recreate that dialogue was actually a lot more painful for me."

IN EFFECT, THE BOOK is a record of Tomine’s reflections on his life as a celebrity cartoonist, riddled with self-doubt and alienation. It was Bernard Shaw, if I remember aright, who said that the unexamined life is a waste: you live it without knowing. And through the course of this volume, Tomine comes to know his life, himself.

For Tomine, the last part of the book is the heart of it. It concludes surprisingly— revealingly—but truthfully. Suddenly, as if a switch were thrown, the end of the book gives all that precedes it a different significance.

The conclusion makes the book a great success. (I won’t say here what the ending is: that would ruin the surprise, wouldn’t it?)

Despite the implication of the book’s title, it is not about the craft of cartooning. Tomine almost never even alludes to that.

Tomine tells Gevinson that when he was a kid, rather than cartooning, he would spend time “designing back covers of hypothetical books of mine, and writing blurbs by actual famous people praising my work. And I would create these things without ever actually having created the book that it was supposedly attached to, so there was definitely some disgusting part of my brain, even as a child, that was like, I want to be published and I want to get praise from people who are more well-known than me, and I think that might have been part of what propelled that artistic motivation.

"But I feel like this whole book is me trying to be kind of honest about how I evolved as an artist, and as a person, and that’s one of those kind of cringe-y memories that’s been popping up in my head lately."

Gevinson asks him about the limits of the medium.

"That’s really the focus of this book,” Tomine says. “Different cartoonists I know have different opinions on this. Some will totally agree, and some will vehemently disagree, and think I’m being intentionally cynical or something, but there’s a part of me that does think there’s something about the art of making comics and the process of it that is mentally damaging. It’s the idea of having no coworkers and being alone for that long, all the things that I love about it, and going through this very slow, methodical process of funneling the grandeur and the spontaneity and the liveliness of real life into these square boxes. There’s just such a long history of cartoonists at the end of their life or at the end of their career who are not in a good place."

He continues: “I think really this book is, by design, the closest I’ve come to doing cartooning that’s like handwriting, where it kind of just flows naturally. In past books, I would literally waste a whole day thinking, ‘How should I draw clouds? I don’t want them to look exactly like the way Dan Clowes draws clouds.’ Or sometimes it’s the reverse of that. It’s like, ‘How have artistic heroes of mine done it?’

"In this book, I tried to really free myself of those neuroses. I feel like my whole career has been this quest to find my authentic style. I really learned everything through imitation and lifting elements of other people’s styles and incorporating them into my own, so it’s kind of haunted me for a long time. Is there anything that I do that is just mine, or is everything an amalgamation of all my influences?”

“That’s sort of a running joke in it,” Gevinson comments, “— people telling you you’re copying other people.”

Tomine agrees: “It’s been a running joke all my life, really. Again, some of those things in the book that are funny anecdotes now really, at the time, made me want to go back to my hotel room and jump out the window.”

The book is a handsome package. Its relatively small size lets it masquerade as a sketchbook, and to perpetuate the impression, Tomine has drawn his pictures on faux graph paper, the light blue square outlines backgrounding every page. A finishing touch of elegance—a ribbon book marker.

Tomine’s drawings are a delight. His smoothly flowing thin lines never vary in thickness, and they are thorough in detailing every necessary aspect of every scene, and yet, every picture is simply rendered, no hachuring or shading.  The visual details are telling rather than merely comprehensive. 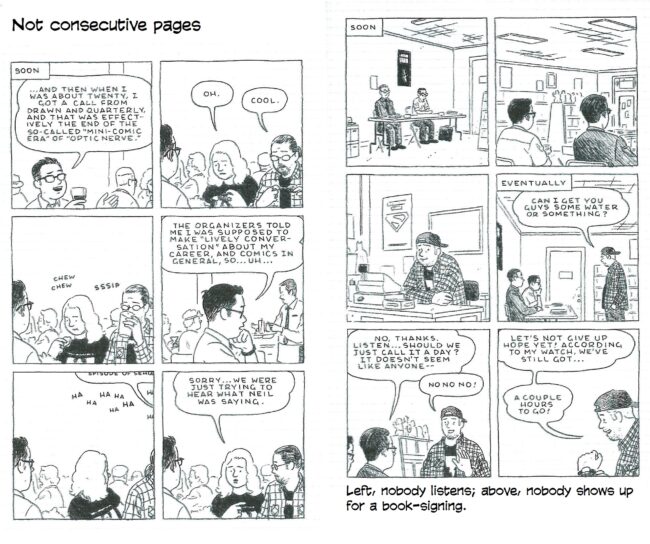 Comments on the book’s back cover are insightful.

“In this deeply self-aware, darkly funny memoir, Tomine recounts the highlights of his career through a series of cringe-worthy encounters, and readers hardly need to be a world-famous cartoonist to relate,” says Malaka Gharib (I Was Their American Dream). 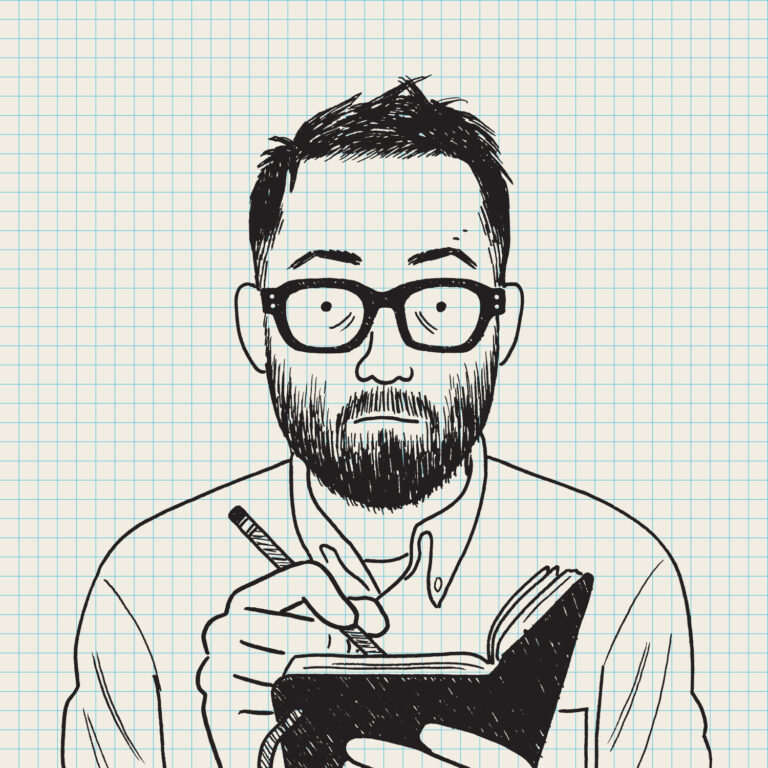 “I’ve Got Decades Worth Of Suppressed Emotions”: An Interview with Adrian Tomine 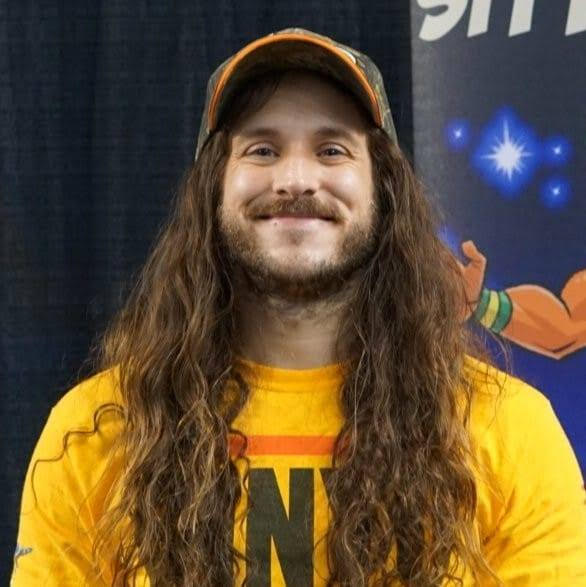 “Let Them Do The Heavy Lifting”: An Interview With Aubrey Sitterson