Well the internet has arrived to my dwelling here in Copake, New York. It's a nice internet, though replete with strange angry vibes that my dog, Mr. Fatty Pants, wisely tells me to ignore. Fatty Pants says: "Hey man, just chill." And so I do.

But my chilling should have no bearing on your comics reading habits.

Today on the site we have Ron Goulart continuing his correspondence column, this time with Basil Wolverton. If I haven't mentioned this before, I should note that Ron is an absolute living treasure of a comics historian. He was the first to document and explain Jack Cole's life and work, and his artist-centric approach to the medium has yielded numerous essential books, including both volumes of The Great Comic Book Artists, and my personal favorite, The Encyclopedia of American Comics. Anyhow, here's a bit from Wolverton:

After Wolverton replied, I learned that he didn’t labor in the New York area but in the Pacific Northwest. He resided in Vancouver, Washington and contributed by mail. The Funnies, Inc. shop handled much of his comic book. His letterhead contained the bottom line “Producer of Preposterous Pictures of Peculiar People.” He sent me a small original drawing of Powerhouse, which I immediately tacked to my bedroom wall to add to my growing collection. In a later letter Wolverton enclosed a snapshot of himself holding his dog. He looked unlike Spacehawk or Powerhouse Pepper. But was a chubby fellow with curly hair. In the letter he explained, “the one with the coat is me.” He was always polite and helpful and upbeat.

And elsewhere online, a diverse selection of reading material with which to wile away your summer day...

Brokelyn talks to Leslie Stein, Lisa Hanawalt, and Brendan Leach about how they make a living (or don't) in comics.

Sean Howe, whose forthcoming Marvel Comics: The Untold Story, is a miracle of research and storytelling, has a classic bit of correspondence from Steve Ditko.

Warren Ellis writes about British adventure comic strips. I've only just gotten on to Modesty Blaise, and am enjoying the strip a lot.

Michael Dooley's two part interview with Susie Cagle, with a guest appearance by Ted Rall, is here and here.

And finally, not comics, but this is an excellent and stylistically diverse career in book cover design. 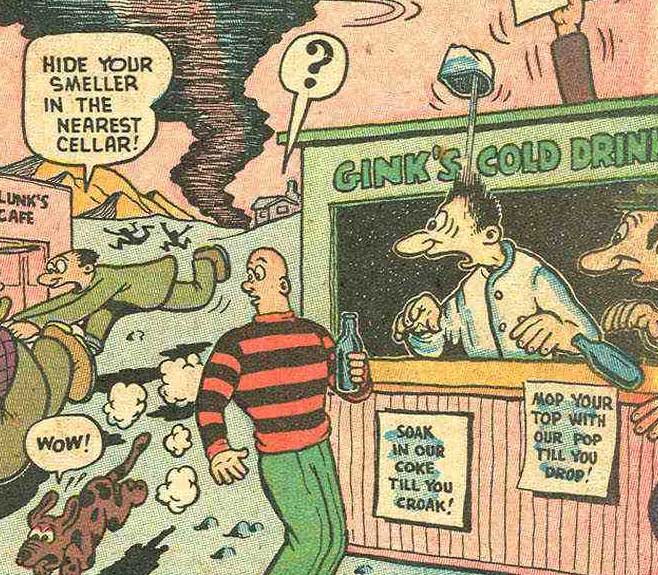 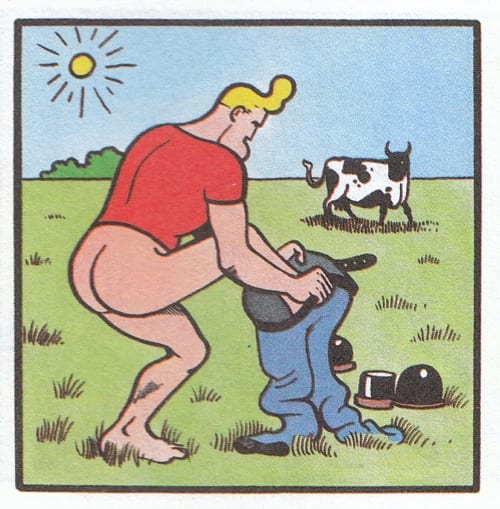 Say Hello To Your Brother