Having been born with a zany gene in my DNA, I was quite naturally predisposed in the 1940s to the comic book work of Basil Wolverton. It was my ambition to grow up to become not only a professional writer but also a gainfully employed cartoonist. In the middle 40s, therefore, I wrote to him c/o Target Comics in Manhattan to tell him that I was fond of his drawing and his writing on both facets of his work, the adventure stuff like Spacehawk and the baggypants wacky material as represented by Scoop Scuttle and Powerhouse Pepper. While obviously slightiy goofy, he had not yet as deeply preoccupied with ugliness and deformity. The years when faces resembled genitalia, internal organs and were decorated with wens, tumors, pockmarks and too many teeth. 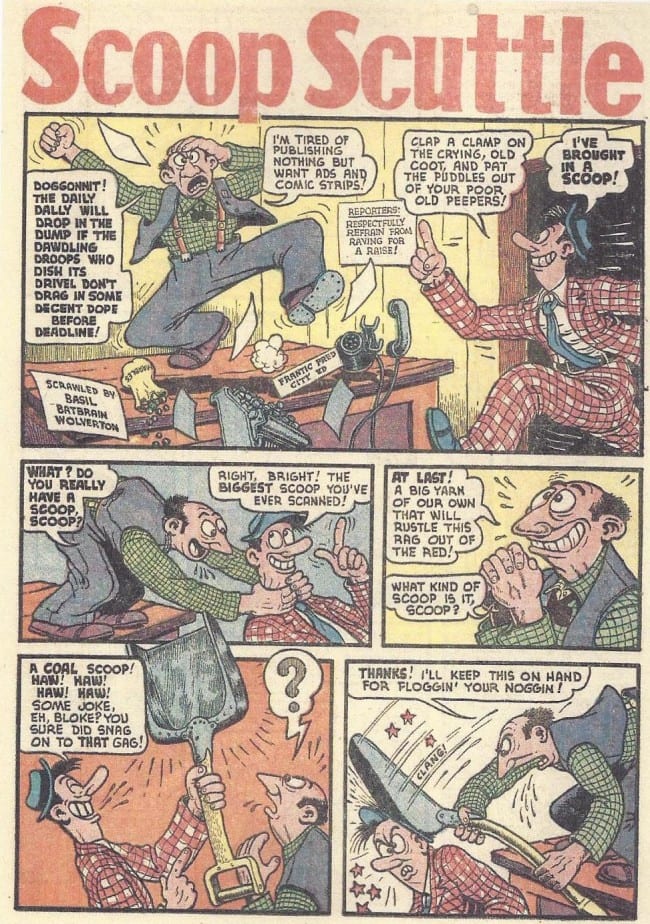 The fellow I wrote to, on a sheet of tablet paper, was a kinder, gentler chap.  I imagined him, looking somewhat like his Spacehawk character (but in civvies), dropping in at Target and hobnobbing with Bob Wood, Carl Burgos and Paul Gustavson and then popping over to the Timely outfit to go out to lunch at the Waldorf with Bill Everett and Al Jaffee.

After Wolverton replied, I learned that he didn't labor in the New York area but in the Pacific Northwest. He resided in Vancouver, Washington and contributed by mail. The Funnies, Inc. shop handled much of his comic book. His letterhead contained the bottom line "Producer of Preposterous Pictures of Peculiar People." He sent me a small original drawing of Powerhouse, which I immediately tacked to my bedroom wall to add to my growing collection. In a later letter Wolverton enclosed a snapshot of himself holding his dog. He looked unlike Spacehawk or Powerhouse Pepper. But was a chubby fellow with curly hair. In the letter he explained, "the one with the coat is me." He was always polite and helpful and upbeat.

Spacehawk was phased out fairly early on. For the rest of the 1940s Wolverton concentrated on funny stuff. His magnum opus was Powerhouse Pepper. It was for Timely (Marvel) that he created the character, the only bald-headed superhero of his day, in the spring of 1942. Powerhouse, who first showed up in Joker Comics #1, didn't even own a superhero suit and usually combated evil wearing a striped turtleneck sweater, slacks and heavy work shoes. Before the feature was many issues old, Wolverton had given way to his fascination with alliteration and reached a point where he couldn't even sign his name straight. Instead he us "by Basil Baboonbrain Wolverton," "by Basil Bucketbeak Wolverton," "by Basil Weirdwit Wolverton," etc. He was equally fond of internal rhyme and his dialogue as well as every inch of wall—and often the floor and ceiling as well—wa full of the stuff. "Zounds your snappers are as sound as a hound's," observes one of the physicians giving Powerhouse his army physical. The three doctors are Dr. Ash Gash, Dr. Bill Drill and Dr. Jack Hack. Scoop's editor complains, "The Daily Dally will drop in the dump if the dawdling droops who dish its drivel don't drag in some decent dope."

All in all, Wolverton produced nearly 500 pages about Powerhouse over the next seven years. His hairless hero held forth in Joker, Gay Comics, Tessie the Typist, Millie the Model and five issues of his own magazine. For some reason there was a five-year lapse between issue #1 and issue #2. "I was never able to make much sense of their publishing policies," he once remarked. "To even matters, though, they were never able to make much sense out of what they bought from me."

Before the 1940s concluded, he also turned out over 300 pages of other funny pages for comic books. His humor features included Flap Flip the Flying Flash, Mystic Moot and His Magic Snoot, a parody of Ibis the Invincible that appeared in the magician's own magazine, Bingbang Buster and His Horse Nellie, The Culture Corner conducted by Dr. Croucher K. Conk, Q.O.C. (short for Queer Old Coot).Wolverton eventually did some SF and horror straight stuff during the weird comics boom. He also did humor pages for Mad and Plop.

The letter I've included below is a later one from Wolverton, a reply to a letter from me, that he sent on November 9, 1957. He's still using the Peculiar People line on his stationery. By this time I'd graduated from UC Berkeley, where I'd edited the humor magazine for a couple of semesters, sold a couple of science fiction stories and gotten myself hired by a fairly large San Francisco ad agency that specialized in humorous copy. I'd also sold a piece to MAD. I wanted him to know that I was maybe starting on the career I had told him I was aiming for since my first letters to him.

It's an avuncular sort of letter, with Wolverton giving me advice on how to proceed and showing, I think, a certain pride that one of his fans was maybe going to succeed a bit. And also here we were working for the same magazine.

In the final decade of his life he became more fundamentally religious, turning out series of meticulously drawn Biblical drawings. He also did a somewhat unsettling series dealing with the aftermath of atomic war, the victims in these were not the Japanese.

During one of Wolverton's last interviews, he listed his Bible drawings as the favorite work of his entire career. But being Wolverton still, when asked what he'd like to be remembered for, he answered, "Some people will remember me longest for the disreputable pants I wear around the house...Regarding comic books, I should like to be remembered for Powerhouse Pepper." He died in 1979. 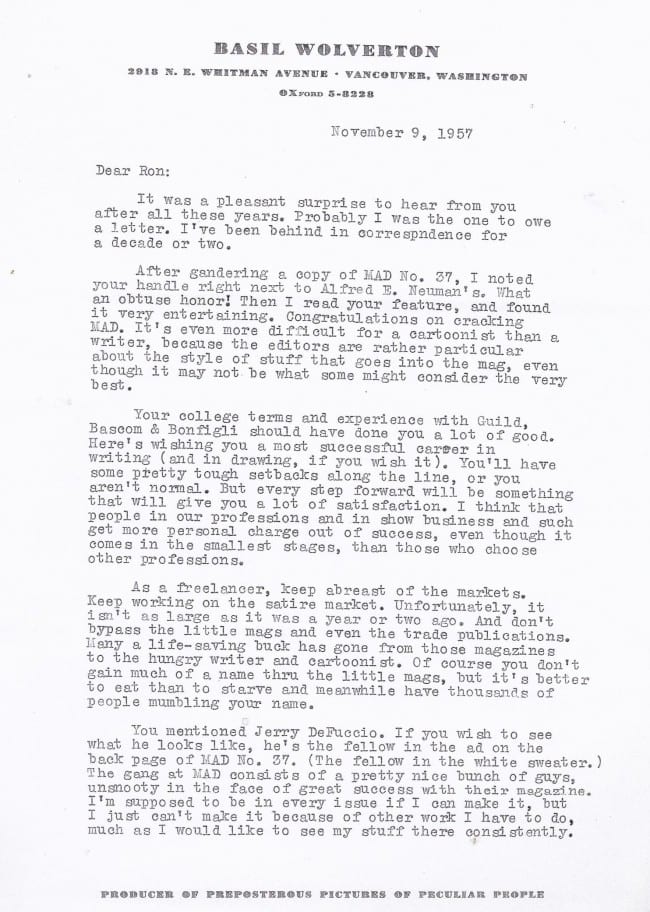 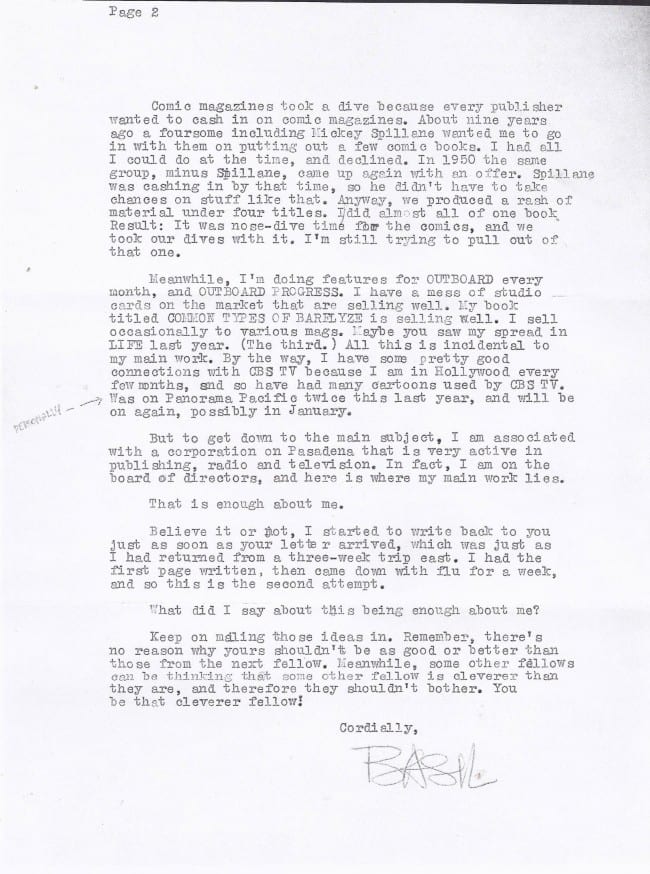 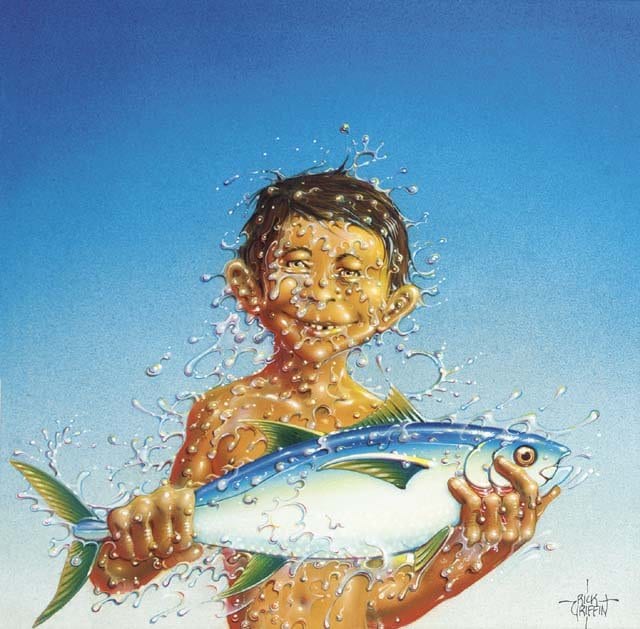 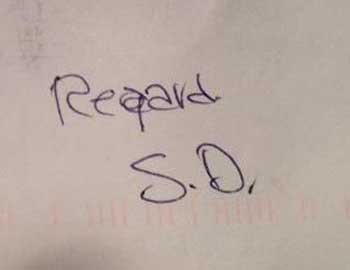 Up to the Majors