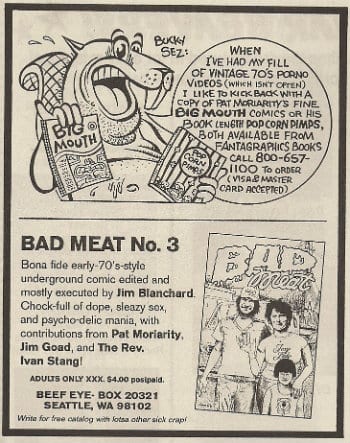 That's the reason I jumped on SWV's still-going Blue Book liquidation sale: I read porn catalogs for the articles. I suppose it was inevitable, though, that SWV and Fantagraphics would maintain some relationship; both are Seattle businesses perched for a long time in a precarious spot on the fringe of pop culture obsolescence. Plus, Fanta was still running Eros Comics at the time, eagle-eyed readers of which no doubt spotted Gilbert Hernandez posing for a photo on the inside-back cover of the collected Birdland with -- among other fine gentlemen -- SWV all-star David F. Friedman, a genuine smut peddler of the day; Jaime Hernandez was nowhere to be seen, though historians will note his participation as art assistant on The Rocketeer, that famed creation of Bettie Page devotee Dave Stevens, who provided VHS jacket art for SWV's edition of the Friedman-produced '68 softcore sci-fi Space-Thing.

Inevitably, there are comics in the Blue Book. 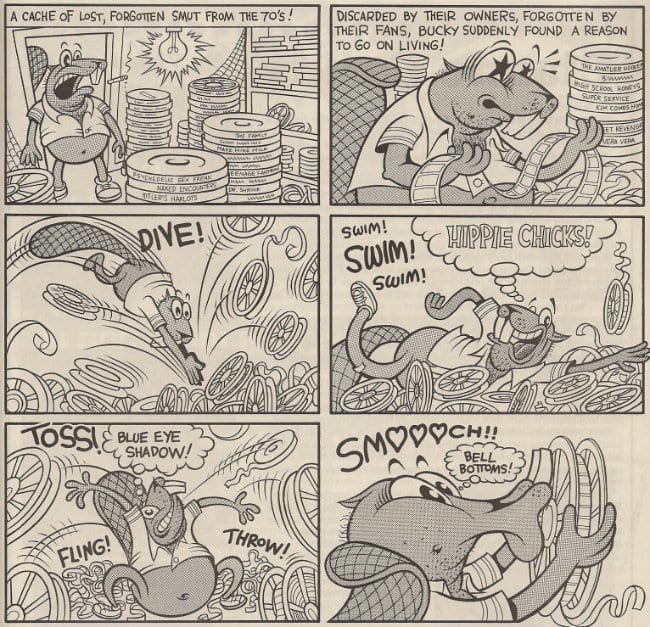 Not a lot of comics, but yes - the above-mentioned Jim Blanchard, he of Bad Meat, serves as inker for Pat Moriarity in this three-page origin story for loveable SWV mascot Bucky Beaver, otherwise illustrated throughout the magazine by the Rev. Eric Eye. A despondent Bucky, in true Inglourious Basterds style, survives a nitrate fire to uncover a secret cache of dirty movies to share with America.

And then, there's the scriptwriter of the Bucky comic, "Video Jones," who indulges in a classic fandom moment: the flowery ode to a favored idol, Ms. Candy Samples. "Fans of Candy always sensed the dark aura of forbidden delight hovering about her. Watching her perform was like watching the mythical manticore fuck. And here, perhaps, is the secret of her endurance as a star: she was a myth come to life. We seem to recognize in her some archetypical figure from the collective unconscious, and what else would an archetypical figure from our collective unconscious be doing but sucking cock?"

Indeed - though I confess I constantly get Ms. Samples mixed up with Carol Connors, who also went by the name "Candy"; two years after the Blue Book was published, she would become prominently whispered-over once more as the mother of momentary indie movie it-girl Thora Birch, who would later star in the movie adaptation of Ghost World, among the most beloved '90s Fantagraphics comics. And so we come full circle, justifying once again my leisure time choices to my dear parents, who grow more thrilled with the direction of this column every single week. 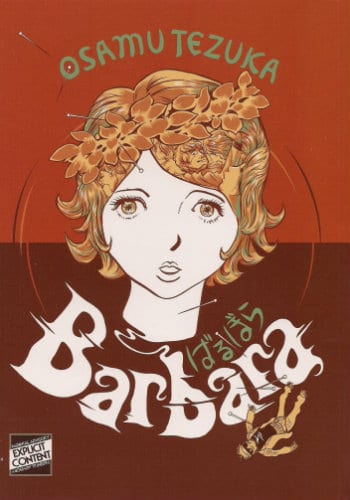 Barbara: Since I'm now in a Something Weird mood, I will hereby dub this 1973-74 Osamu Tezuka gekiga 'Exploitation Manga' - probably not of the porno chic character of the American '73, but an earlier, 'roughie' '60s style, heavy on a politer form of violence and degradation. A drunken author meets a filthy, hippy-ish girl on the streets - an eminently abusable muse of sorts, triggering all sorts of truly bizarre adventurers and occurrences. Borderline inexplicable, nearly impossible to summarize, maybe this is the kind of vintage comic that needed Kickstarter to get it translated, though publisher DMP is now releasing it through Diamond - 434 pages, with an introduction by Frederik L. Schodt; $19.95. 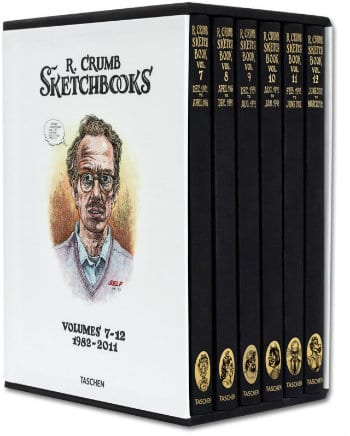 Robert Crumb: Sketchbooks Vols. 7-12, 1982-2011: I kind of like Taschen's comics releases. They did that mostly-readable Little Nemo compilation around the turn of the millennium that anticipated (perhaps prodded) several deluxe, less-comprehensive formats to follow. I still page through that huge, baffling Manga Design book they released back in '04, stocked with profiles of dozens of artists I've still never seen anywhere else. And hey, that Guido Crepax bondage comic Sarah Horrocks profiled the other day on Comics Alliance? Translated in 2000, as part of the Emmanuelle, Bianca and Venus in Furs omnibus, still very affordable second-hand. Of course, as proud owners of Stanley Kubrick's Napoleon know, the publisher does have a tendency to eventually re-issue crazy-expensive deluxe editions in smaller, more affordable formats, so maybe you don't have to drop a thousand bucks on 1,344 pages of hand-selected sketches from the last three decades of Robert Crumb's career, but... can you risk your bookshelf looking uneven when a second set of earlier sketchbooks drops sometime in the future? More money, more problems, gentle patron. Details; $1,000.00.

Leeroy and Popo Vol. 1: This is a new-ish release from prominent UK publisher Nobrow, freshly available for import via Diamond. It's part of the publisher's Serial Box line of 6.7" x 9" (or so) bookshelf-ready ongoing series - all of them were present and accounted for at SPX, owning, I'll theorize, to their modest proportions. I bought this one, because I like the look of debutante talent Louis Roskosch - a super warm, dim, construction paper color look to characters pitched somewhere directly between commercial manga and mid-century BD. The story, 52 pages in length, is nothing too exciting; mostly it's a pair of funny animal critters living in a human world, fretting over dates and learning about being nice to odd people, like a short episode of children's television pitched, one suspects, at twee adult readers, though it's probably not a bad choice for kids, if you don't mind the occasional porn reference. Lots of aptitude in here, good potential. Samples; $13.95.

Fight! Vol. 2: And here's another one, which I did not pick up for myself - also 52 pages, it follows the travails of a devilish-looking (but actually rather nice) wrestler and the grappling he does. Nobrow calls it a "deeper, saner" English counterpart to Prison Pit; the artist is one Jack Teagle. Supposedly vol. 7 of the publisher's larger Nobrow anthology will also be showing up in some places, though Diamond doesn't say so. Samples; $13.95.

The Tower Chronicles - GeistHawk: Vol. 1 (of 4): Also British and apt for action is Simon Bisley, who's done some nice, irregular interiors for Hellblazer over the last few years (and will also see his earlier Lobo work reprinted by DC this week). This is his new 'big' series as penciller, however, one of those potential cross-platform deals: writer Matt Wagner has "developed" it with Legendary Pictures founder Thomas Tull, and the publisher (unsurprisingly) is Legendary Comics, the only other output of which thus far has been Frank Miller's 2011 ode to diplomacy, Holy Terror. It's a 72-page something about a supernatural bounty hunter that will eventually encompass three storylines of four issues each; Bisley is joined by inker Rodney Ramos and colorist Ryan Brown. Preview; $7.99.

Batman, Incorporated #0: This is DC's gimmick-of-the-moment, a month of prequel issues that ostensibly seek to fill in story information from prior to the relaunch of all the publisher's superhero comics. Or, if you happened to be Grant Morrison, and you were writing Action Comics at the time, what you did appeared to be an odd effort at capturing the faintly art movie-ish tone of Zack Snyder's teaser to the upcoming Man of Steel, leaning heavily on (one assumes) potent iconography and the lacquered golden hour color stylings of artist Ben Oliver. It wasn't great, but it was interesting - in fact, it was weirdly reminiscent of Morrison's abortive run on The Authority with Gene Ha from a few years back, only... nice. Anyway, this is the only other one of these things Morrison is writing, and the artist is the very adept Frazer Irving, so maybe something striking is in store. Preview; $2.99.

Happy! #1 (of 4): Elsewhere (i.e. Image) Morrison launches a new run of creator-owned projects with this contemporary geek subculture-tickling thing about a vulgar, ruined hitman who finds himself paired up with -- yes -- a magical pony. Art by Darick Robertson, of Garth Ennis' soon-to-conclude The Boys. Preview; $2.99.

Yotsuba&! Vol. 11: Hey, did you know Blade of the Immortal is ending in Japan? On Christmas day, no less! The English translation will probably wind up crossing its 18th anniversary when all is said and done, having once been the last of the old comic book-format manga releases, a tradition dating back to The Legend of Kamui and Mai the Psychic Girl. In contrast, the ongoing Yotsuba&! -- Kiyohiko Azuma's slightly unexpected general audience charmer about a spunky little kid and her humorous daily experiences -- will one day wind up repping a mid-'00s era of manga breaking away from fandom interests to touch a certain wider comics-reading appeal. Until then, when a new one pops up in Japan, a new one will follow here, from Yen Press; $11.99.

Alien: The Illustrated Story - The Original Art Edition: Speaking of crossing over, I guess it was only a matter of time before some enterprising publisher indirectly evoked the "Artist's Edition" moniker of IDW's popular line of gigantic color original art facsimile packages (with text) - Diamond is even calling it an "ARTISTS ED," though I don't think the real title's that close. This is a 96-page Titan Books release, presenting Walter Simonson's art for the 1979 Heavy Metal-published adaptation of the Ridley Scott motion picture without colorization, at 17" x 13", scanned from the original boards, with various production-oriented supplements; $75.00.

Joe Kubert's Tarzan of the Apes - Artist's Edition: And speak of the devil! Here's a similarly 17" x 12", 152-page "b&w-in-color" compendium of the late Kubert's early '70s work on DC's iteration of the Edgar Rice Burroughs character... basically, it's his early 'origins' issues with a pair of extra stories added on. I like these comics a lot - everything in them seems to play to Kubert's strengths in lithe, dynamic draftsmanship, and I'm sure IDW's format will flatter their effect; $100.00.

The Hole of Tank Girl: In the mood for more vintage Deadline after that Hugo Tate book? Somehow missed this stuff in its various other packagings? Unmoved by recent efforts at critical reevaluation? Got a hundred bucks you're not already giving to IDW/pledging to Taschen on a payment plan? Then why not enjoy this 352-page Titan slipcased hardcover omnibus collecting the entirety of the work creators Alan Martin & Jamie Hewlett completed on their character (which presumably excludes the Peter Milligan-written Hewlett stuff - can't have it all); $99.99.

Gasoline Alley Vol. 1: Not to be confused with Drawn and Quarterly's Walt & Skeezix line, this marks the start of an IDW effort at reprinting the works of Dick Moores, successor to series creator Frank King. This 288-page book covers the years 1964-1966, at which point I think King was still offering some plot supervision; $49.99.

Mars Attacks: Your not-quite-a-comic for the week, a 224-page Abrams compendium of the artwork from the 1962 trading card series, chock full of Wally Wood & Bob Powell. I do believe the 1994 expansion will also be included, along with reminisces by series writer Len Brown; $19.95.

Dave Stevens' Stories & Covers: Finally, we've got another manifestation of IDW's relationship with the Dave Stevens estate, a 272-page, 8" x 12" collection of all of the artist's various non-Rocketeer comics, as well as all of his comic book covers. Is to too much to speculate on whether Space-Thing will make an appearance? A boy can dream; $49.99. 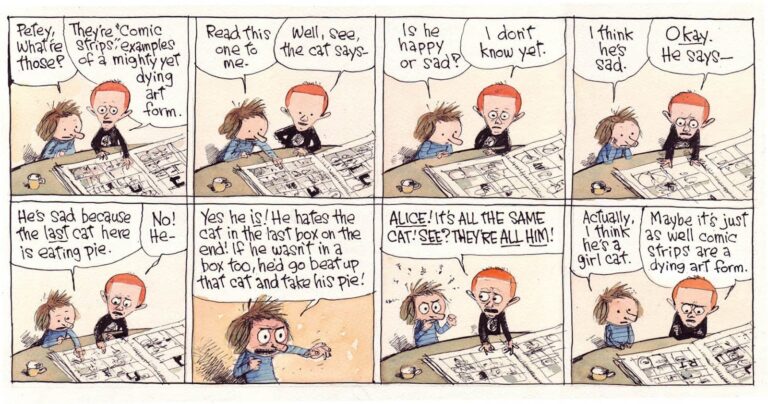 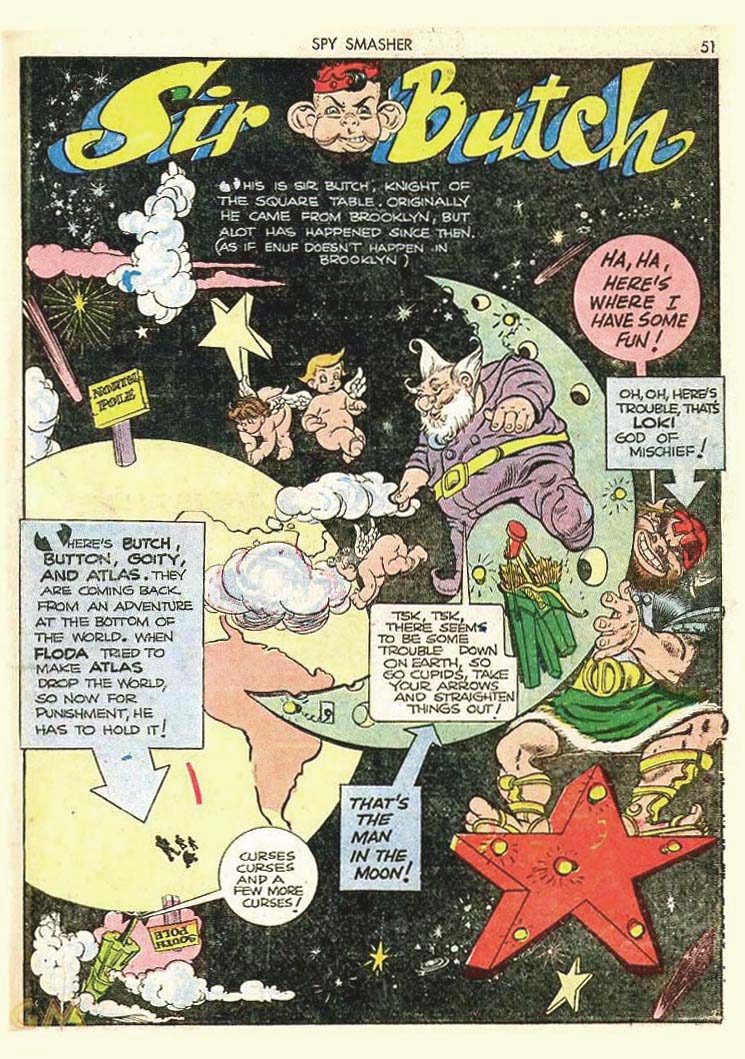