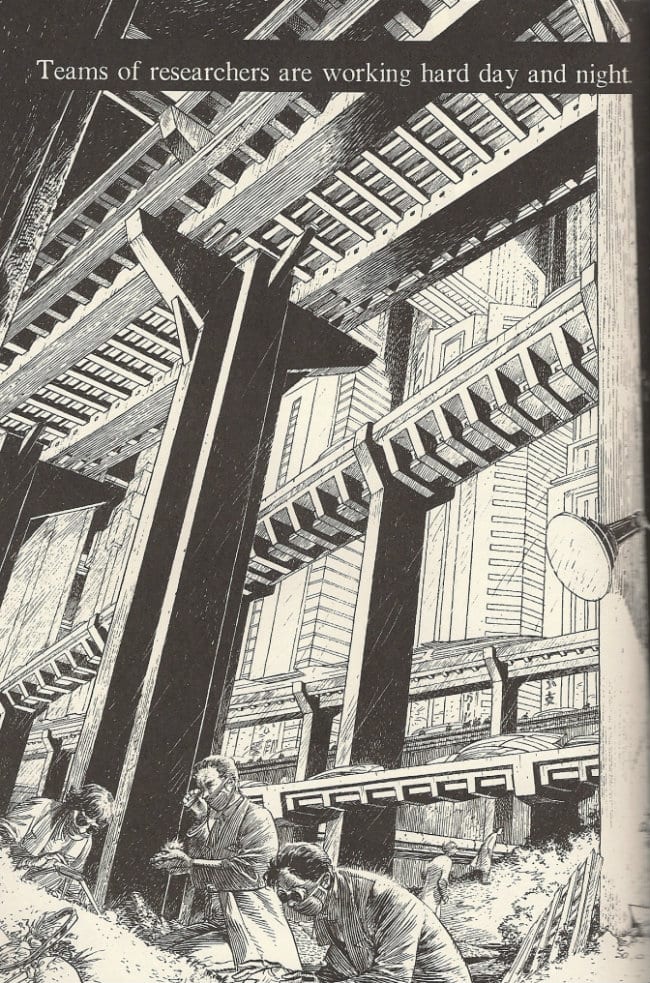 Above we have the last we saw in America of Les Cités obscures - those curious, allegorical, architecturally-minded works of Belgian artist François Schuiten and French writer Benoît Peeters, wonderful and eccentric comics that have apparently gotten themselves stuck in the position of not justifying whatever costs there would be to continue their English-language publication, while still retaining enough readership interest to send prices soaring on all of work thus far released. NBM has released six albums' worth of material -- The Great Walls of Samaris (1983), Fever in Urbicand (1985), The Tower (1987), Brüsel (1992), and the two-part The Invisible Frontier (2002-04) -- but little of it remains readily available; price-conscious readers might want to scour back issues of Dark Horse's old Cheval Noir anthology, which serialized Fever in Urbicand (#1-6) and The Tower (#9-14), though shrinking Schuiten's emphasis on looming, psychologically affecting mega-structures down to comic book proportions does it no favors. Which is maybe another reprinting issue: these comics need to be seen big to even work.

Yet that final sampling above is from a 9 1/2" x 6 1/2" anthology, 2005's Japan as Viewed by 17 Creators, from Fanfare/Ponent Mon; the concept of the book was to solicit stories from artists living in different parts of Japan while sending Franco-Belgian artists to specified areas of the country - Schuiten & Peeters thus transform Osaka into a fantastical realm of insect study, perhaps in silent commemoration of the Osaka-born and bug-obsessed Osamu Tezuka. It's a rare example of the pair transforming a city as based on a man's disposition; more common is the most recent 'official' Les Cités release in English, The Invisible Frontier, which riotously morphed landscapes into reclining female figures, as if mocking its sexually inexperienced cartographer protagonist, his obsession with recording the true boundaries of a rapidly-expanding empire matching his inability to comprehend his lover's emotional interests. A concluding presentation of map-like birthmarks on the small of the woman's back takes on an atmosphere of sexual humiliation straight out of Milo Manara's spicier albums, though one gets the feeling Schuiten's frequent servings of nude female skin is never meant to be so exciting as the buildings soaring so far beyond the desires of the flesh.

All of this is a long way of noting that Schuiten has now struck out on his own with a brand-new solo album, 12 La Douce, a b&w entry in Les Cités; I used to laugh at how all of these stories set in fantastic worlds require long journeys, in that somehow nobody ever develops high-speed communications access, but now I realize I do have the internet and I didn't notice this thing's release last April. A big English-language overview is here, with many art samples. It's been a pretty big year for BD masters of the Métal Hurlant salad days, with Philippe Druillet releasing a new one last February; maybe some enterprising publisher(s) will take note. 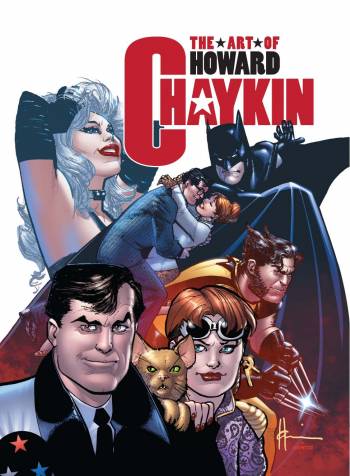 The Art of Howard Chaykin: A 200-page Dynamite hardcover release, in which text by longtime industry editor/manager Robert Greenberger outlines the career of one of the most fascinating talents to enter traditional comic books in the '70s and roll with the many expansions changes in format, distribution and content would allow. Additional writing by Brian Michael Bendis and Walter Simonson is proffered. Preview; $29.99. 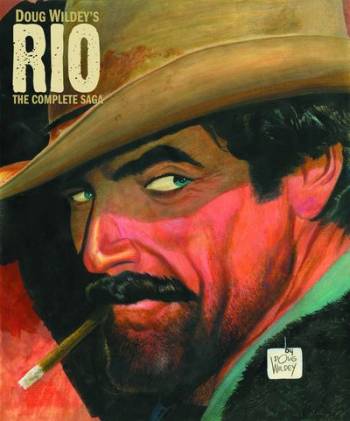 Doug Wildey's Rio: The Complete Saga: Through which IDW promises a 272-page, 8" x 12" comprehensive hardcover compilation of gunfighter comic specialist (and Jonny Quest creator) Wildey's solo Old West feature, which spent the '80s and '90s bopping around from Eclipse to Comico to Marvel to Dark Horse until the artist died in '94. These are fun, attractive entries in a genre rarely seen in North America, and I believe an unfinished 'final' story is additionally set for inclusion. Image samples; $49.99.

(ADDITIONAL NOTE: Contrary to some reports, I can find no indication that the new League of Extraordinary Gentlemen issue is actually being released this week; Top Shelf says it's next week. Likewise, despite its absence from Diamond's release list, I'm seeing rumbles that Joe Sacco's Journalism collection may be due. Please keep your eyes peeled for gritty reportage and/or Ozymandias throwing aside a curtain and shouting I DID IT TWENTY-THREE YEARS AGO.)

Team Cul de Sac: This is a fundraising book conceived by web designer Chris Sparks in support of newspaper strip artist Richard Thompson, who was diagnosed with Parkinson's disease in 2009. It's a 144-page Andrews McMeel collection of art by a lot of cartoonists, with book and auction proceeds to benefit Parkinson's research. In the interests of full disclosure, I participated in a periphery zine project edited by Craig Fischer, which involved several other writers for this site; $29.99.

Lost Dogs: It's easy to lose track of the career trajectory of Jeff Lemire, a now-established DC comics writer who seemed to come out of nowhere with the beginning of his Essex County series with Top Shelf in 2007, but he was also a 2005 Xeric Grant recipient for this, a two-fisted seaman thing that Top Shelf now reprints in a 104-page "remastered" edition. Preview; $9.95.

Marathon: Your all-ages big ol' book publisher choice for 6/20, via First Second, in which movie director Boaz Yakin (also, crucially, screenwriter of the Dolph Lundgren version of The Punisher) teams with artist Joe Infurnari for a 196-page take on (I believe) Plutarch's recounting of Eucles' (later Pheidippides') long run from the titular Greek town in a time of conflict. Preview; $16.99.

Los Angeles Ink Stains Vol. 1: Image is all about the strips this week, starting with a compilation of autobiographical comics by Jim Mahfood, previously seen on his website and elsewhere. Samples; $29.99.

Liberty Meadows: Sunday Collection Vol. 1 (of 2): And here's more of an old-school (modern) choice, one of the higher-profile late '90s/early '00s newspaper comics success stories, a student paper-originating funny animals + pretty girl strip by Frank Cho -- now best known as a superhero artist at Marvel -- who withdrew the work from syndication in 2001 to produce it as an Image comic book. The same publisher now presents this compilation of the first three years of Sundays. Samples; $24.99.

X-9: Secret Agent Corrigan Vol. 4: Yet older strips, however, arrive from IDW, which remains focused on the Archie Goodwin/Al Williamson run on this long-lived espionage feature, here covering late 1974 through mid-1977, which should leave one more book's worth of stuff after this; $49.99.

Flash Gordon: On the Planet Mongo: Way back now, to Alex Raymond's 1934 sci-fi creation, a much-reprinted work nonetheless now getting a 'restored' presentation in a series of chronological, 11" x 10" Titan releases for the UK market, the first 208-page volume of which has been imported by Diamond this week; $39.95.

Judge Dredd Digest(s): The Cursed Earth Saga (&) The Day the Law Died: Man, I'm not convinced all that Bolland/McMahon/Smith/Gibbons/Ewens/McCarthy/Leach art is gonna shrink very well to 7.7" x 5", but clearly Rebellion wants some inexpensive editions of early Dredd serials around for the movie's debut, so here they are; $11.00 (each).

Trinity: A Graphic History of the First Atomic Bomb: I try and keep track of these serious-minded historical/current events graphic novels from large book publishers, in part to study the development of the 'graphic novel' as a curious subset of nonfiction, and also to divine a code from them all that will reveal to me the formula of love. This one's from Hill and Wang, a 160-page b&w study of the development and detonation of the first atomic weapon - the artist is Jonathan Fetter-Vorm, a contributor to several works derived from literary sources; $22.00.

Silver Streak Archives Vol. 1: Dark Horse has some premium priced Golden Age stuff this week, collecting issues #6-9 of Silver Streak Comics into a 280-page hardcover, with art by Jack Cole and others, and an introduction by Michael T. Gilbert. Samples; $59.99.

Gantz Vol. 23: Surely your manga pick of the week, provided your definition of manga includes 'bodily harm,' and you are not following Jormungand. Just look at this; $12.99.

Slam Dunk Vol. 22 (of 31): Given that Takehiko Inoue's name-making '90s sports manga series is still 2,000 or so pages away from completion in English, it might seem odd to mention that we're approaching the climax here, except the climax to Slam Dunk is purportedly the ultimate in decompressed storytelling, lavishing hundreds upon hundreds of pages on a single cataclysmic game of basketball, if I'm not mistaken. This should be a little before that; $9.99.

Casanova: Avaritia #4 (of 4): HEY, this is the end of writer Matt Fraction's signature series for now -- creator-owned and published via Marvel's Icon line -- having picked up a fair amount of the initial enthusiasm surrounding it which had dispersed in its absence. Art by Gabriel Bá and colorist Cris Peter. Preview; $4.99.

J.N. Williamson's Illustrated Masques: Finally, longtime readers will recall that I've sworn a blood oath to mention any Tim Vigil comic that happens to see release through Diamond; Dan even foreshadowed this in his blog post today, though he did not know he was doing it - such debts of honor are greater than us all. Hence, IDW -- on the heels of a 2011 suite of deluxe editions from Gauntlet Press -- brings a collection of two squarebound books Innovation released in 1992, a comics-format adjunct to a series of popular horror prose anthologies the late editor Williamson had been fronting since 1984 (though among the editors here was Mort Castle, briefly of '90s horror comics specialist Northstar, the initial publisher of Faust). Vigil is present for a two-page story written by Castle himself, while Courtney Crumrin creator Ted Naifeh appears elsewhere (in collaboration with Scott Rockwell), as do 'name' writers Stephen King (working with Matt Thompson) and Clive Barker (who actually does a freestanding illustration, not a story); $19.99.

CONFLICT OF INTEREST RESERVOIR: I mentioned New York Mon Amour last week, but how can you possibly cite Jacques Tardi too many times? All I know is that four NYC stories are included, in black, white & red; $19.99. Also dropping is Out Of The Shadows, a 200-page collection of Golden Age comics by Mort Meskin, edited and designed by Steven Brower; $26.99. And Fantagraphics' hilarious little mascot returns for more Floyd Gottfredson-headed antics in Walt Disney's Mickey Mouse Vol. 3: High Noon At Inferno Gulch, boasting 60 or so pages of supplements toward a 280-page total; $29.99. 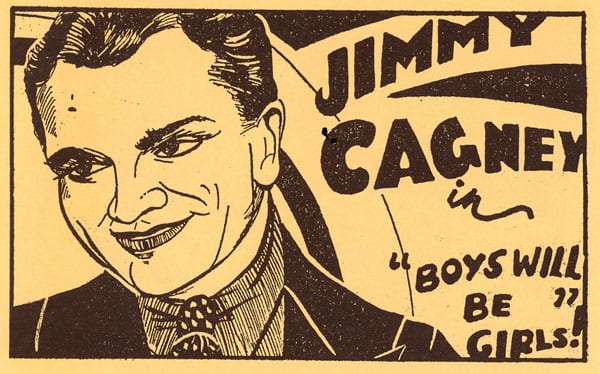 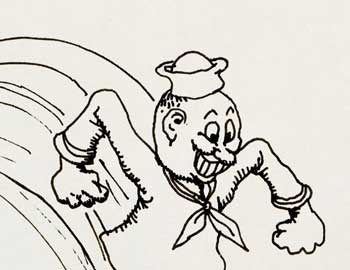