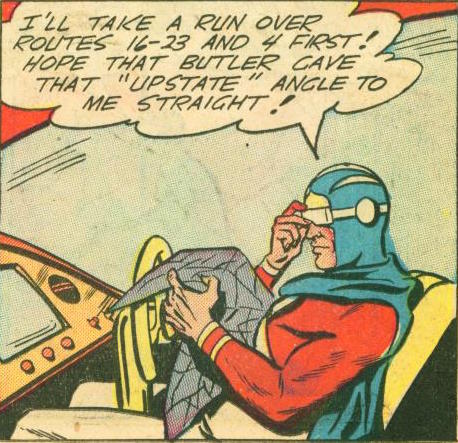 O great and lamentable Lord of Comics, do grant us ability so great as we may need in order to hold hope, be it ever so faint, that we may not embarrass ourselves in our attempt to not embarrass ourselves in emulation of Joe McCulloch's holy example. For we have never undertaken such a task before, and the image of Jog shines so painfully bright before us that it doth blind our eyes. We also pray that Jog never again takes a vacation, and that he doth henceforth remain forever in Pennsylvania, in range of a computer-like device and reliable Wi-Fi, for we are lost without him. In the name of Ogden Whitney, we offer you this, our text of the week.

PLEASE NOTE: What follows is not a series of capsule reviews but an annotated selection of items listed by Diamond Comic Distributors for release to comic book retailers in North America on the particular Wednesday identified in the column title above. Be aware that some of these comics may be published by Fantagraphics Books, the entity which also administers the posting of this column. Not every listed item will necessarily arrive at every comic book retailer, in that some items may be delayed and ordered quantities will vary. We have in all likelihood not read any of the comics listed below, in that they are not yet released as of the writing of this column, nor will we necessarily read or purchase every item identified; THIS WEEK IN COMICS! reflects only what we find to be potentially interesting. You could always just buy nothing. 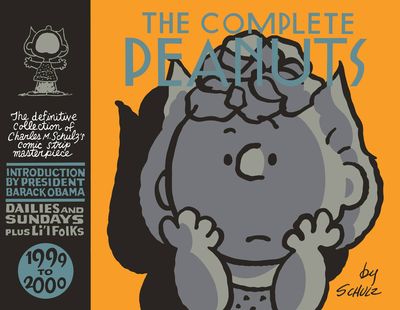 The Complete Peanuts Vol. 25 1999-2000. This is the last one, and has an intro by President Obama. These comic strips were the last ones Schulz drew, and the ones we looked at when Schulz died that year. I remember watching a rerun of Charlie Rose (my favorite interviewer who is not Howard Stern, and a Southern Man, too) after Schulz passed away, and something the cartoonist said (I don't remember what) moved me to tears. There I was, 24 years old, living on West 48th st. in Manhattan and I was so touched by whatever Schulz said in that black expanse in front of Charlie. I like Peanuts most now when read to my son a few strips at a time, when I can appreciate the strip's hits and misses -- its consistent ups and downs. Fantagraphics, hardcover; $30.-DN 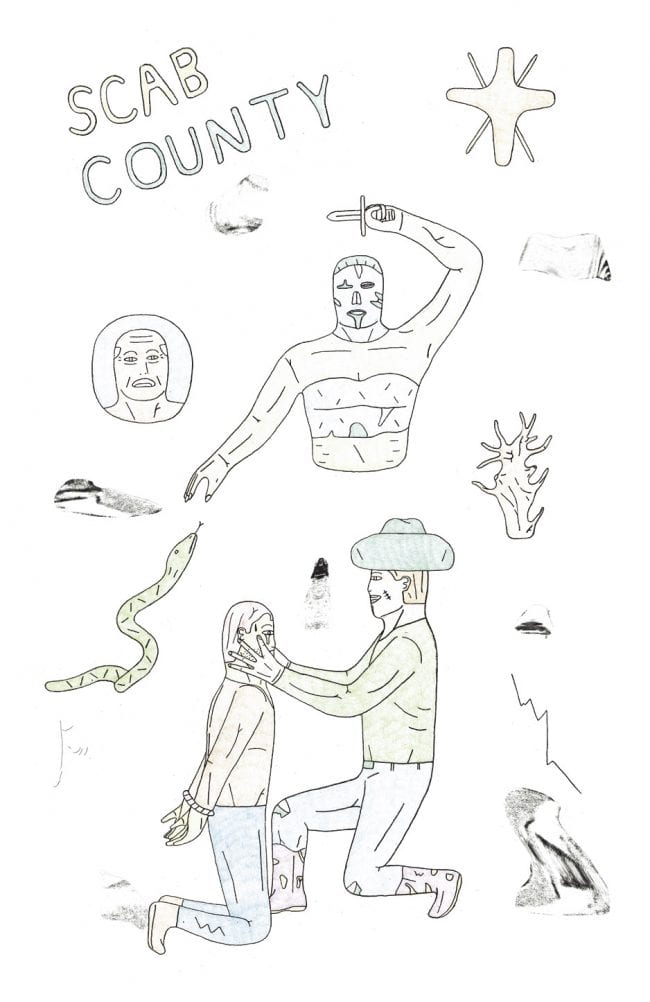 Scab County: A Floating World Comics edition of one of my favorite comics of 2015. Carlos Gonzalez here revives the Western (not some DC Preacher shit or the epic, but some 19th century dime novel shit) and does so in so demented and funny a way that you'll immediately wonder why this man doesn't have a lifetime contract with TCM to rewrite the dialogue for extant B Western movies. The drawings are look like arial views of crop markings -- ancient, indelible and just a little bit askew. These are comics built on the hard lessons of John Stanley and Johnny Craig. So, basically the best comics. 28 pages, 10 x 6.25, $5.00.-DN

Cinema Purgatorio #1: Who would have thought twenty or even ten years ago that in 2016, Alan Moore would not only still be a prolific creator of decidedly déclassé genre comics, but that the bulk of it would be published by a downmarket gorehound press like Avatar? With the lucrative opportunities no doubt before him, no one can say that Moore doesn't follow his own aesthetic star. This is the first issue in a new monthly black-and-white horror series which according to promotional copy will emulate the EC and Warren anthologies of yesteryear. The book was initially funded through Kickstarter (earning some $110,000 from 1600+ backers), and each issue will reportedly be spearheaded by a tale from Moore and his League of Extraordinary Gentlemen collaborator, Kevin O'Neill, apparently exploring supernatural cinematic themes (possible shades of Kim Newman here, the film critic whose Anno Dracula series of novels majorly influenced League). Other contributors include Kieron Gillen, Ignacio Calero, Garth Ennis, Raulo Caceras, Christos Gage, Gabril Andrade, Max (son of Mel) Brooks, and Michael DiPascale, and their announced serials somewhat less hope-inspiringly promise mostly stories of giant-insect invasion and revisionist takes on Universal-movie-monster tropes -- tricky if not impossible material to pull off. But Moore is almost always worth keeping track of, and his recent work has been consistently ambitious (if not-quite-as-consistently rewarding). O'Neill is one of Moore's most capable and sympathetic graphic interpreters, and so this may turn out to be primo hash for aficionados, but my guess is that Moore skeptics will be better off starting elsewhere. Perfect-bound, $6. -TH

Heavy Metal #280: This is the first Grant Morrison-edited issue of the long running SF/Fantasy anthology. We are promised three different covers, as well as stories by the likes Enki Bilal. This property hasn't been good since, what, the mid-1980s? (At best.) And Morrison is, well, living the dream? Truly the only thing this has going for it is the prospect of Benjamin Marra's work being propagated further into a world that doesn't yet know of his power. So that's good. $8.-DN

Hip-Hop Family Tree #9: Ed Piskor is arguably among the most successful cartoonists in the world right now, and he deserves every bit of it. HHPT is an exceedingly well researched and amazingly suspenseful (this last bit because I just want to see what's made next) work of nonfiction cartooning. University comics will never understand, but as Beto has shown, that really doesn't matter. This is the latest installment of the only graphic novel-to-comic book serialization I can think of. Fantagraphics, $3.99. -DN

Jessica Farm, Vols. 1 and 2: A reissue of volume one and a new release of volume 2 of Josh Simmons' ongoing, self-imposed Life's Work. I haven't quite cracked the code of this one, but I want to. Fantagraphics, 104 pages and $16.99 each.-DN

Judge Dredd: Mega-City Two #1: This, as with so much this week, is a Jog special, a reissue of a series in which longtime Dredd critic Douglas Wolk writes his subject. Now yours for a dollar from IDW.-DN

King-Cat Comics and Stories #75: The anniversary issue of this sublime comic, and an "all-Masie" (the cat) issue. The closest thing we have to Peanuts in our time. 44 pages, $5.o0.-DN

Night Air: An all-ages 64-page fantasy adventure from Louisville, Kentucky's Ben Sears, about a boy who, with the help of many gizmos and a helper robot, attempts to hunt for treasure in a haunted house. At first glance this appears to be something like a cuter, more child-appropriate version of Joe Daly's RPG-inspired Dungeon Quest, though I've only seen short previews and that may not reflect the book as a whole. In any case, Koyama Press is usually reliable; $12. -TH

Paul Up North: Conundrum Press has continued Michel Rabagliati's Paul series, once a kind of Quebecois curiosity from D&Q, but always pretty dull. I would read the books (back when I read nearly every comic that came my way) and think, "This is what French comics are like", and I was half right. 184 pages, $20.00 -DN

Rules for Dating My Daughter: Mike Dawson, the host of our own TCJ Talkies podcast and the author of graphic novels such as Troop 142 and Angie Bongiolatti, makes what I believe is his debut publication under the Uncivilized Books imprint with this collection of comic stories and essays exploring Dawson's fears and misgivings about gun owners, exposing his children to Disney-brand ideological propaganda, and other patriarchal burdens of responsibility. Many of these stories first appeared online, and a few generated some discussion. Dawson seems to be trying something genuinely difficult in his work: to portray (or authorially manifest) well-rounded, rational decency, a goal not often earnestly attempted in comics, much less achieved. This is straight-up sincere-and-sensitive suburban-dad stuff, but not unconsciously (or unashamedly) so. $16. -TH

Why Would You Do That?: A collection of short, seemingly surreal(ish) humor pieces from the Queens-based illustrator and cartoonist Andrea Tsurumi, creator of the online "overheard in NYC"-style diary comic strip Eavesdropper, and of a story in the TOON Books anthology, Little Nemo's Big New Dreams, among other things. New Jersey's Hic + Hoc is the publisher. $10. -TH 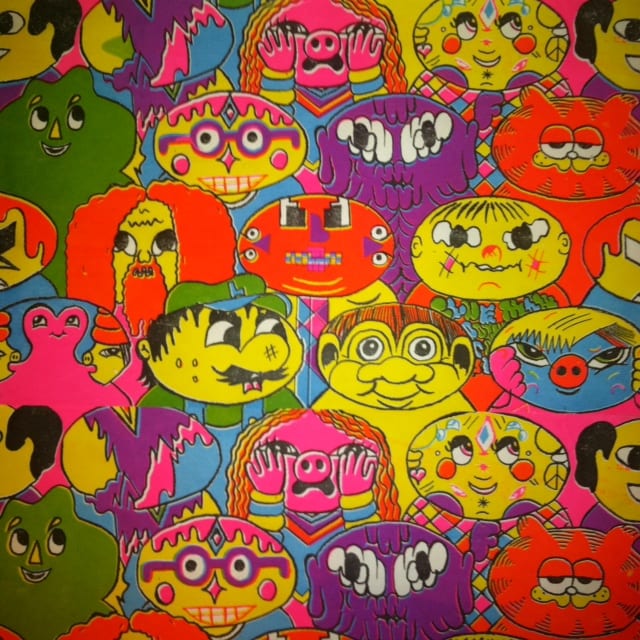 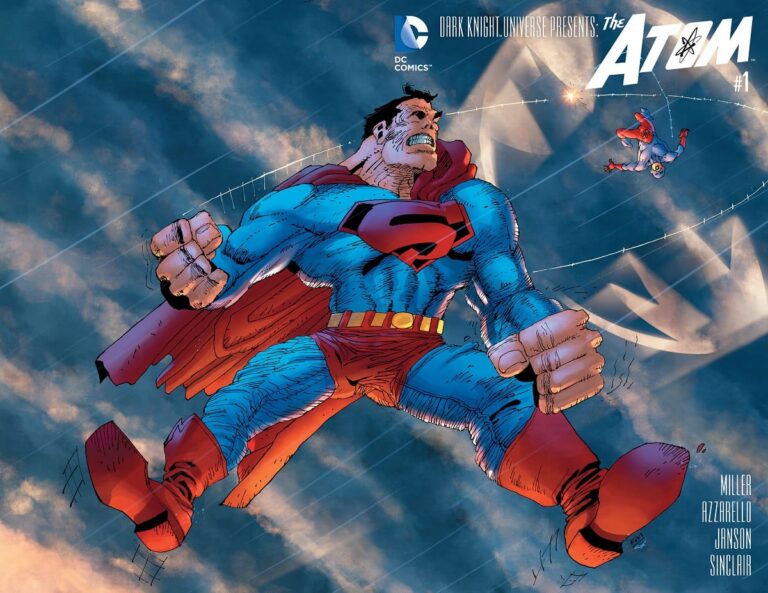