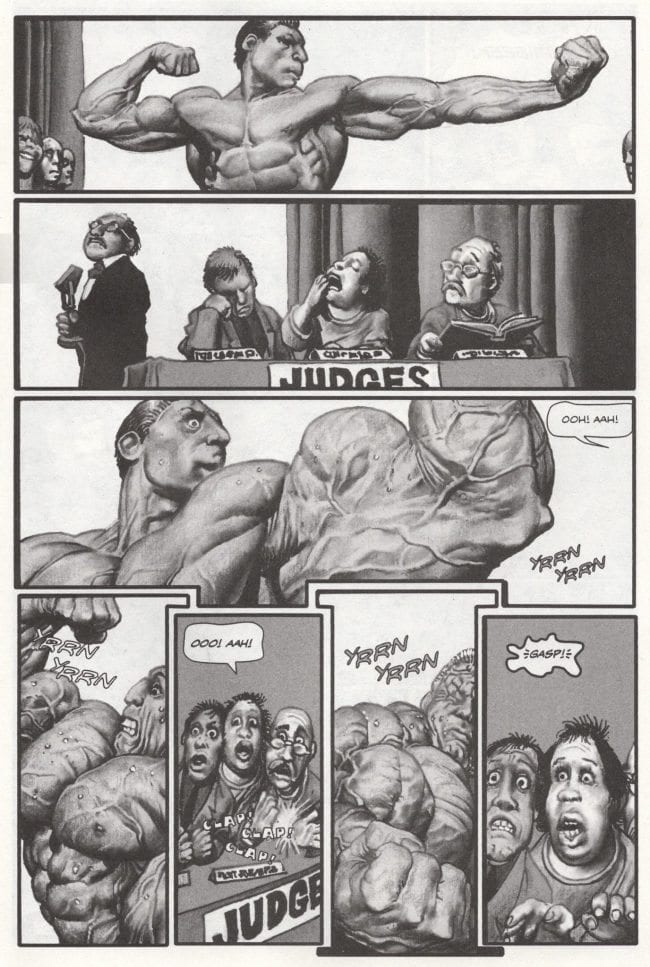 I'm back from vacation, though it wound up being the kind that made me want to lie in an oxygen tent for a few days afterward, so please excuse the brevity of this week's presentation. (And, thank you to my friend Katie Skelly for classing the place up in my absence.) I did manage to get to a comic shop after I returned, however, and one book I was pleased to find was issue #4 of Richard Corben's current Dark Horse series Shadows on the Grave; it's a b&w horror anthology not unlike Fantagor from back in the underground period, finding the 76-year old artist exploring many old motifs. Indeed, a good amount of the work is linked by a Midwestern setting, taken from Corben's youth, and stories tend to wander around, drinking in the sights before landing on inevitable yet sometimes arbitrary shock endings. The primary tone is not really one of visceral terror, but memento mori: an evocation of comics that meant something to Corben half a century ago, young comics that nonetheless foregrounded the presence of death. There's also a Den-related serial that runs in every issue -- the project is technically an 8-part miniseries -- along with a few collaborations with his old colleague, the writer Jan Strnad, who scripts the story excerpted above. I like that Corben doesn't downplay the value of funny drawing; the leftmost seated judge experiencing a long dark night of the soul up in panel 2 makes me laugh every time, while the story itself, concerning a bodybuilder who seeks supernatural performance enhancement, gives Corben a fine opportunity to parody the idealized musculature of not a few scantly-clad heroes he has drawn in the past. It's process; a memory. 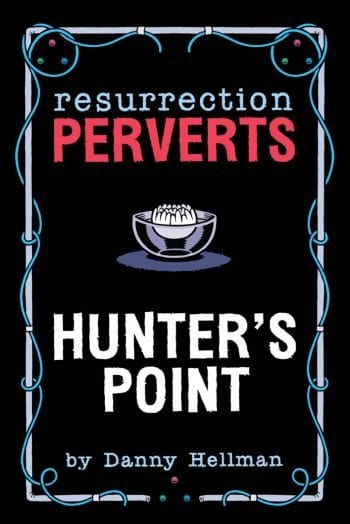 Resurrection Perverts Vol. 1: Hunter's Point: Two books from longtime practitioners up in here this week, starting with an original graphic novel by Danny Hellman, I believe the first of his career. Some of you will recall that Hellman got his start with Al Goldstein's Screw in the late '80s, and I don't think its unreasonable to suspect that such experiences have informed this 100-page, 6" x 9" color hardcover's plot, which concerns a porn magnate's efforts to revive his business with juicy photos of the U.S. President, only to fall into an unusual and dangerous situation. Every page is a splash, connecting the 'text' to Hellman's extensive work in illustration - very fast-moving, the first of a planned series. Published by Alternative Comics & Dirty Danny Press; $15.99. 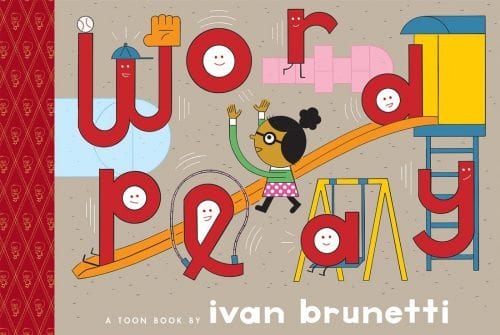 Wordplay: And here is Ivan Brunetti, no stranger to illo assignments himself, with a new 40-page color children's comic from Toon Books. Specifically, it's a comic for very young children -- all the way down to age 3, per the publisher -- with an emphasis on visual puns as a means of teaching compound words. An opportunity for admirers of the artist's sometimes grim-purposed round head style to see it marrying its typical simplicity of pictorial communication to straightforwardly cute and funny ends. Published as a 9" x 6" landscape hardcover. Note that the publisher also has works from Pennsylvania artist/educator Kevin McCloskey and French children's book author Claude Ponti this week; $12.95.

The Magical Twins: This is a relatively early comic from the BD catalog of writer Alejandro Jodorowsky - hailing from 1987, I presume the work is only appearing in English now from Humanoids because Les Humanoïdes in France was not the original publisher (to say nothing of the fact that it's a one-off album); the present 9.4" x 12.6", 56-page edition follows a new French release from last month. A mystic high fantasy scenario created for the children's weekly magazine Le Journal de Mickey, the serial also marked Jodorowsky's first collaboration with the artist Georges Bess, with whom he would embark on a wide variety of not-for-all-ages projects. Actually, unless you're gonna watch Tusk on YouTube, it's pretty rare to find Jodorowsky working in a kid-friendly style with anyone. A quick comparison suggests the work has been recolored; $19.95.

Herman by Trade (&) Josephine Baker: A pair of new selections from UK publisher SelfMadeHero, as distributed in North America by Abrams. Herman by Trade is a 120-page allegorical-looking graphic novel from Canadian artist Chris W. Kim concerning a working man with the power to shape-shift, and the troubles that come with his attempts to exercise artistic creativity. Josephine Baker is a 496-page(!!) French bio-comic from 2016, in which writer José-Louis Bocquet and artist Catel Muller (the same pair behind the Kiki de Montparnasse bio SelfMadeHero released in 2011) cover the life of the 20th century Parisian entertainment sensation; $22.95 (each).

Grrl Scouts: Magic Socks #1: This is a series writer/artist Jim Mahfood has been working at every so often since the late '90s, something of a signature title that changes with his own shifts in style. Now it has a current iteration in the form of an Image comic book series: "a pulse-pounding psychedelic adventure through the streets of Freak City." Your stapled debut of the week; $3.99.

Animal Noir #4 (of 4) (&) Cerebus in Hell? #4 (of 4): Two series I've mentioned a few times in the past that are now wrapping up. Animal Noir is an eccentric and digressive IDW anthropomorphic crime comic from Slovenian creators Izar Lunaček & Nejc Juren following a hard-boiled giraffe on a tour through the seedy side of animal civilization. Giraffes are big again, you know. Cerebus in Hell? is an Aardvark-Vanaheim photoshop joke comic from creator Dave Sim and Sandeep Atwal, commemorating the 40th anniversary of the long-lived, now-dead titular earth pig swordsman. Note that while the miniseries has now concluded, the concept will continue in one-shot form while Sim and another collaborator, artist Carson Grubaugh, work on his long-gestating critical bio-comic The Strange Death of Alex Raymond, which will now apparently be pre-re-serialized as crowdfunded Artist's Edition portfolios of loose pages before it becomes a set of collected books via the aforementioned IDW; $3.99 (Noir), $4.00 (Cerebus).

Spawn #1 Special 25th Anniversary Director's Cut: It is still the 25th anniversary year for Image, time and space enduring as predictable values, so now we have the inevitable retrospective editions for the original 1992 comics. I never did read much of Spawn as a kid, mainly as a result of circumstance - it was a little too occult to risk asking any adults in the room to buy, even though Todd McFarlane's somewhat caricatural variant on '90s bombast was the kind of thing that should have hooked me as a Spider-Man reader (I loved Erik Larsen's poppier Simonsonian approach on The Savage Dragon, as opposed to the work of Lee, Liefeld & Silvestri, all of whom were doing 'X-Men art', which I associated with long, intimidating stories that would hopelessly confuse pre-teen me). Anyway, early Spawn probably meant something to some of you, and this new edition presents the art in uncolored form as reproduced from the original art boards, with Tom Orzechowski's lettering, and commentary throughout by writer/artist McFarlane; $4.99.

Rise of the Dungeon Master: Gary Gygax and the Creation of D&D: Finally, your bookstore-ready bio comic of the week is this 144-page Nation Books release profiling one of the icons of tabletop role-playing, an avid gamer-turned-designer put in the seat of unusual subcultural influence. The writer is David Kushner -- experienced in 'geek'-related non-fiction, making his comics debut -- and the artist is Koren Shadmi, who's worked extensively with generalist book publishers; $16.99. 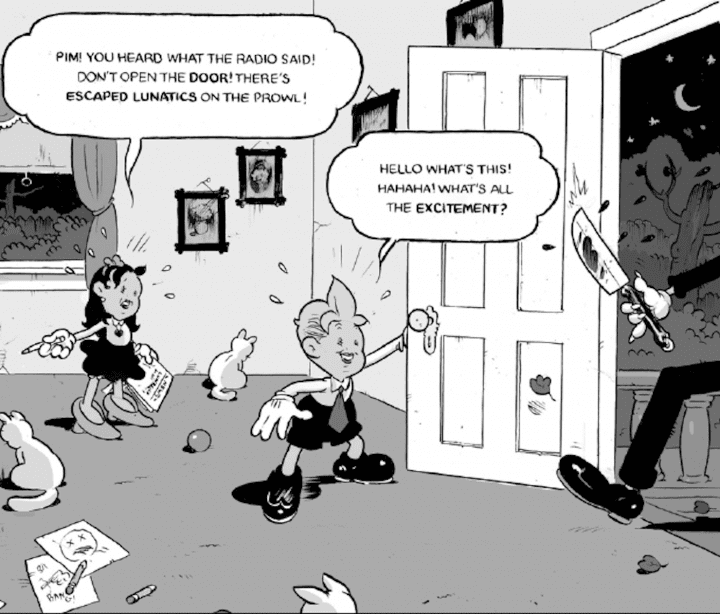 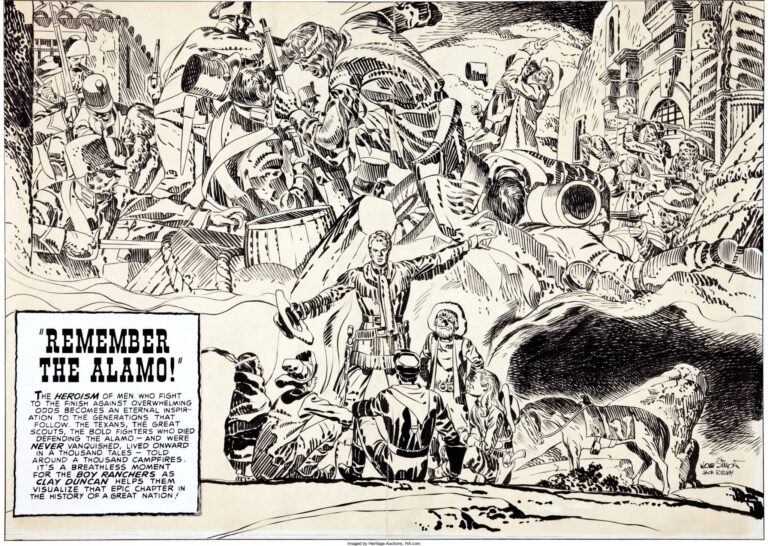