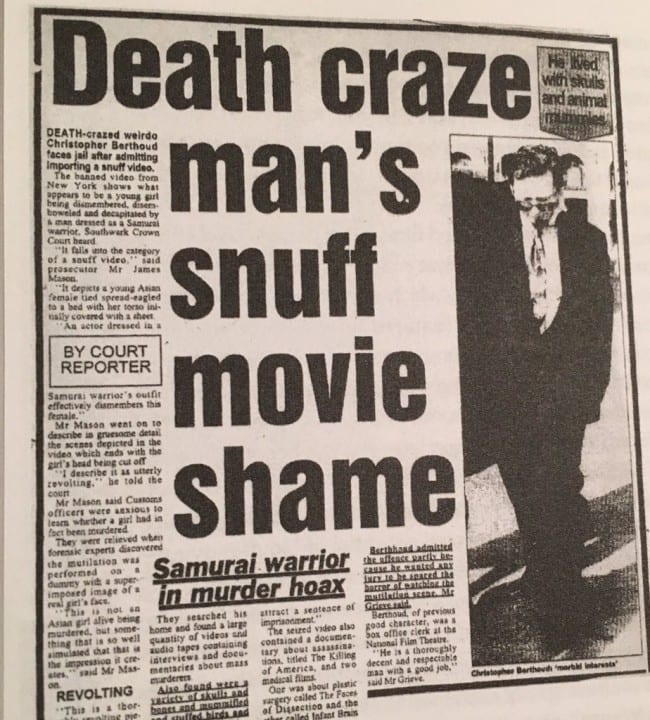 Most of what I've been reading lately comes from the new and enormously expanded, 600+ page edition of David Kerekes' & David Slater's Killing for Culture, a Headpress book last published in 1995 as a history of 'death on film' with a special emphasis on the myth of the snuff movie; now that real death footage is both a ready and common tool of deliberate terror, available immediately to anyone with internet access, you can imagine how the manuscript had to more than double its length to address today.

It's from there that I've scanned the image above: a 1992 UK tabloid gawp relating to the case of Christopher Berthoud, arrested for importation of suspected snuff movies; Kerekes & Slater are at their best in picking apart the little bouts of social hysteria that movies do occasionally prompt, in this case mangaka Hideshi Hino's 1985 Flower of Flesh and Blood, a rather stylized bout of dismemberment aesthetics that nonetheless fooled many in nth-generation bootleg VHS form -- the actor Charlie Sheen, who alerted the FBI, famous among them -- into thinking the Panorama of Hell author, who also stars, had actually chopped a lady to pieces while dressed in feudal armor. I love the "[s]amurai warrior" designation, as if it's Hino's day job.

(The authors elsewhere cite to Tomo Machiyama's excellent feature interview with Hino in The Comics Journal Special Edition vol. 5 from 2005, which I naturally commend to your attention.)

Comics crop up a few times throughout the new Killing For Culture, though it is pretty clearly not as much an area of expertise as cinema for Kerekes & Slater. An appendix on "Guro" serves as a catch-all for basically any type of super-violent comic, with Juan Gotoh the only Japanese artist identified by name. With a great focus on message board chit-chat, the authors seem mainly interested in this work as a social manifestation - which can be said for most of the media in Killing for Culture, but the manga is not given any of the taxonomic scrutiny as, say, the 'mondo' film. Granted, that's why it's in the appendix, but as a hopeless case, I can't help but bristle a little at the straight parity afforded these works and something like the Avatar zombie comic Crossed, which appears in the same section. Avatar's series, since the company's mid-'90s founding, function within the tradition of observing the mores of 'mainstream' comics and heightening them for a ready audience of mainline comic book readers who want a little more; hence the nude covers and the like on all their old 'bad girl' comics (not anything they invented). Similarly, the genesis of Crossed lies in part with the writer Garth Ennis -- unmentioned in the text -- riffing on the enormous success of The Walking Dead and modifying its content to reflect a more unbridled id while also denouncing an ethos of distrust and hopelessness that the writer tends to portray as adolescent and ugly.

This, of course, then became a heavily commercial endeavor itself. But its origins are in the specifics of North American comic book fare, and indeed the unusual position zombies occupy in the populist region of such. Quite different from Japanese manga, though perhaps teasing out the separation requires more immersion in the stuff than Kerekes & Slater could afford, given their extensive questing in American, Japanese and wordwide shock videos which forms the true corpus of their study. 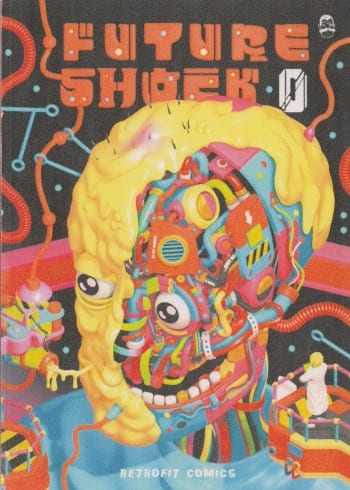 Future Shock Zero: SF comics from two groups up here today, where the oxygen is thin. The assembly of editor Josh Burggraf, Future Shock -- despite a title reminiscent of the two-fisted British thrill power of 2000 AD -- skews sharply toward the young, the allusive, and the experimental in genre-shaped works. There's been a few of these before, but this is the first from Retrofit/Big Planet, and at a magazine-sized 136 pages to boot. Contributors include Sophia Foster Dimino, Lala Albert, Keren Katz, Alex Degen, Ben Urkowitz, Pat Aulisio, Vincent Giard and others. Definitely the best of the line I've seen; $18.00. 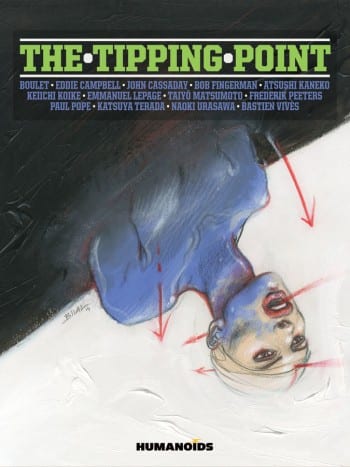 The Tipping Point: On the other hand, here we have a 132-page, 8.5" x 11" album from Humanoids, exploring "the key moment when a clear-cut split occurs... that tips us from one world into another, from one life to an entirely new one." As an anthology, it favors more in the manner of established talents, I suspect working in a comparatively traditional, illustrative vein - and, as many have pointed out, it is, moreover, une fête de la saucisse. Intriguing lineup for seinen manga fans, though, with all-new stories by Taiyō Matsumoto, Naoki Urasawa(!), Katsuya Terada, Atsushi Kaneko (of the super-stylish Bambi and Her Pink Gun), and Keiichi Koike, creator of the hallucinogenic satire Ultra Heaven, in what I believe is his legitimate English-language debut. Other contributors include Eddie Campbell, Paul Pope, Boulet, Frederik Peeters, Bastien Vivès, Bob Fingerman and John Cassaday. Also available in a 100-copy limited slipcased edition with bookplates signed by everyone; $29.95 ($499.00 limited).

Ramshackle: A Yellowknife Story: As I say about at least one artist in all of these things, I am unfamiliar with the work of Alison McCreesh, who recounts across 144 pages her settlement in the Northwest Territories after an education in Quebec. Conundrum Press publishes, suggesting a descriptive work attuned to the unique character of the setting. Preview; $20.00.

Mirror #1: In which the "8House" line of fantasy comics at Image rearranges itself as series numbered under discreet storyline titles. They all have different creative teams anyway, and this one looks particularly interesting, coming from Malaysian artist Hwei Lim (of the webcomic Hero), working in whispery painted-style colors. Emma Ríos, among the heads of the Island anthology (and herself an artist on other projects) writes this tale of "a terrorist talking dog, an idealist mage and a heroic lab rat on their quest for acceptance." Preview; $2.99.

School Judgment: Gakkyu Hotei Vol. 1 (of 3): Your new manga (just manga) pick of the week is VIZ's edition of a recent (2014-15) series from artist Takeshi Obata, co-creator of Death Note, Bakuman, Hikaru no Go and other shōnen hits. This, from examining the volume count, was probably not so much a hit, which kind of makes me want to look at it more - written by one Nobuaki Enoki, it's a fantastical look at a court for schoolchildren, with all roles from attorneys to judges filled by kids. Obata has since reunited with frequent collaborator Tsugumi Ohba for a new monthly series, Platinum End, which VIZ is releasing digitally, chapter by chapter; $9.99.

Sky Doll: Decade 00 > 10: Your not-entirely-new Eurocomics (just Eurocomics) pick of the week is this 232-page Titan compendium of SF comics from writer/colorist Barbara Canepa and artist/somtimes-writer Alessandro Barbucci. It appears to be a straight translation of a 2010 French volume, which pairs the original 2000-06 trilogy of albums with various short pieces by the creators and tributes from artists like recent Angoulême Grand Prix finalist Claire Wendling and current superhero favorite Marguerite Sauvage. Note that the main trio of albums has been translated to English twice before -- first by Heavy Metal in 2006, then by Marvel in 2008 -- and that this release will purportedly redo the text yet again; as to such endurance, I can only say that Sky Doll, with its lush, candied art poured over socio-religious lampoon and sexy genre propulsion, is probably what people who barely read European comics assume all European comics are like, so assiduously does it embody a certain popular mode. Samples; $34.99.

Sweaterweather & Other Short Stories (&) Robot Dreams: Two reprints this week for veteran graphic novel era cartoonist Sara Varon, whose sprightly drawings and gently melancholy stories anticipated the current run on kid-appropriate books, even at Alternative Comics, which first published Sweaterweather back in 2003. Now handled by First Second, this collection of wordless monochrome shorts and other bits 'n pieces is augmented with additional material and presented as a 128-page hardcover. Robot Dreams, in contrast, was originally released by First Second in 2007, but is now reprinted by Macmillian's backlist children's book division Square Fish. It's a 224-page saga of a dog and a robot, and the things they can and cannot do together, and the imaginings they suffer thereafter; $19.99 (Sweaterweather), $9.99 (Robot).

Judge Dredd: The Complete Case Files Vol. 26 (&) Sláine: The Brutania Chronicles Vol. 2: Primordial: We've also got two from the aforementioned 2000 AD, representing old and new thrills. Judge Dredd hits up 1996-97 for a solid run of stories written by co-creator John Wagner, plus a team-up with vampiric dandy Devlin Waugh from writer John Smith and artist Siku. Sláine is much newer, representing 112 pages from co-creator Pat Mills and artist Simon Davis, in the midst of the barbarian character's most recent painted saga. Both of these are UK imports from Rebellion; $27.99 (Dredd), $23.99 (Sláine).

Laika: But what if... WE COULD BRING THE TWO TOGETHER? Enter: Nick Abadzis, creator of Hugo Tate in the UK's famous Deadline magazine, and also one of the first cartoonists published by First Second -- which is just now reaching ten years of operation -- via this 2007 historical work about one of the first doomed space travelers, a dog blasted into orbit by the Soviets in 1957. It appears to be a straight reprint, for those who didn't see it the first time around. Preview; $18.99.

Providence #7 (of 12): And, of course, where would we be without Alan Moore? Definitely in a world where comic books are slightly less likely to make us go "Jesus Christ," which, for various reasons, was the most likely reaction to the prior issue of this Avatar horror series, now merrily traipsing into its second half. Jacen Burrows draws the continuing adventures of a journalist rapidly finding himself driven mad by encounters with the characters of H.P. Lovecraft, all assembled in a shared universe of talkative menace; $4.99.

Prez Vol. 1: Corndog in Chief: Finally - I don't read any DC superhero comics these days, but I've been around long enough (i.e. far, far, far too long) to know that there's usually at least one of them doing something weird and potentially worthwhile. Word around town is that Prez, a revival of the Joe Simon/Jerry Grandenetti teen president concept, is the champion of today. Expect satire for times of wide margins from writer Mark Russell (previously of Top Shelf's 2013 release God Is Disappointed in You) and primary penciller Ben Caldwell (who put together a Wonder Woman story for DC's Wednesday Comics anthology that a lot of people enjoyed) in this softcover collection of the first six issues; $14.99.