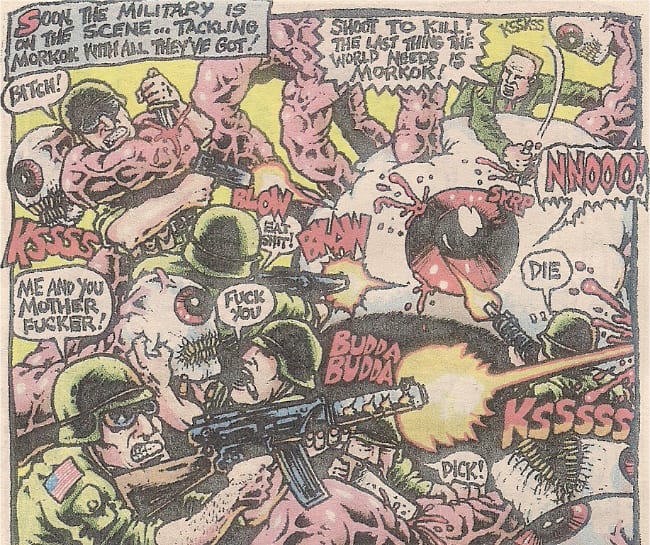 As much as I hate to follow up a day's topic with the same thing, I enjoyed yesterday's Jason Karns interview enough to want to scan in a close-up image from straight out of his odd, faded publications, here specifically the horror showcase Satanic Terror, which kicks off with a seven-page homage to classic Atlas-type Kirby monster comics, The Thing With Too Many Damn Eyes. Karns' squat legions of clench-toothed soldiers bring to mind the old Metal Slug video games, and probably the funniest bit of chicken fat business can be seen above, with one of the grunts taking time out to lay hands on one of Morkok's ocular tendrils and firmly declare "FUCK YOU," as if this appeal to communication is what'll really win the battle. As mentioned at the link, the artist declines to identify himself in the comic any more than any given soldier; there is no legal indicia, no signatures anywhere, no credits, not even issue numbers on any of the installments of Fukitor I have, thus preventing the inattentive reader -- maybe encountering this stuff away from a handy website -- from even knowing what order the comics were made in, or should be read in. It doesn't matter, any more so than any one grunt might matter before he has proven himself and become memorable; the idea of tracking authorial development is collapsed into pure activity, if mostly as a flourish, since you're unlikely to find this stuff anywhere other than lined up in order, ready for deployment. 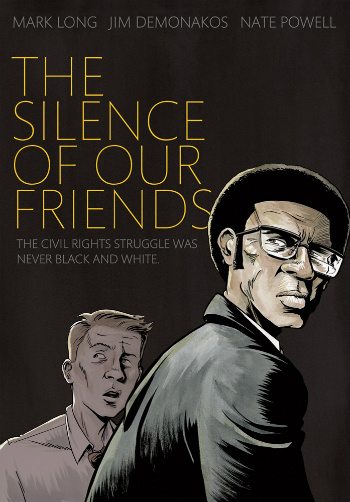 The Silence of Our Friends: From perhaps exactly the opposite side of the comics world comes your graphic novel pick from a large book publisher, worthy topic and all: civil rights struggles in late '60s Texas, drawn from experiences of co-writer Mark Long, scripting with Jim Demonakos. The most intriguing factor of these 208 pages, however, will perhaps be artist Nate Powell, quickly following last year's release of Any Empire. From First Second. Preview; $16.99. 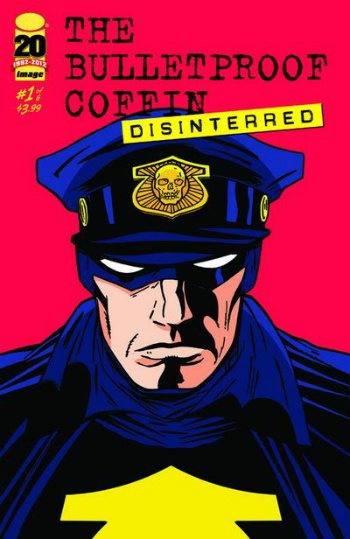 The Bulletproof Coffin: Disinterred #1 (of 6): Also in follow-ups, here's the launch of David Hine's & Shaky Kane's new Image sequel to their wry 2010 ode to funnybook conservatism and absorbing fandom, now apparently focused on the series' superhero characters in a series of showcases, some of them issue-length, some of them anthologizing small stories, and at least one of them (#4) scheduled to devote every one of its panels to a seemingly discreet scene. Likely the most interesting comic book launch you'll find on Wednesday. Preview; $3.99.

Fantastic Life: Sean T. Collins introduced this Xeric-winning 128-page Kevin Mutch production as "the story of a drunken, drugged-up art-school malcontent stumbling his way through awful parties, lousy punk shows, mortifying painting-class critiques, and portentous encounters with the woman of his (wet) dreams, with some 'is it a hallucination/is it a dream/is it a warp in the space-time continuum?' weirdness ladled on top toward the end" in his very positive review last year, and interested parties will want to know it's now been distributed to comics stores through Diamond, I think for the first time. Big sample; $9.95.

A.D.D.: Adolescent Demo Division: Definitely available for the first time, given the circumstances, is one of Vertigo's continuing, irregular hardcover graphic novel releases, this time a 152-page project from writer Douglas Rushkoff, of several cross-platform pursuits and the 2006-08 Vertigo comic Testament. Here he's teamed with Goran Sudžuka & José Marzán Jr. (of various bits of Y: The Last Man) for a rather Jodorowskian concept of youths raised from infancy to become the ultimate samplers and navigators of big media entertainment; $24.99.

The Manara Library Vol. 2 (of 6, but really 9): El Gaucho and Other Stories: YOU'VE READ ABOUT IT ALL ONLINE, now come and get the second of Milo Manara's two collaborations with writer Hugo Pratt, a 1991-92 seafaring opus paired in these 280 pages with Trial by Jury, a 1975-76 series of vignettes from world history scripted by Mino Milani. Note that the Manara Library series is still nine volumes long, though publisher Dark Horse has opted to corral the really spicy stuff under a separate Manara Erotica banner (kicking off in May), of which there will be three volumes to the main line's six, unless I'm missing something; $59.99.

Brenda Starr, Reporter: The Collected Daily and Sunday Strips Vol. 1: Moving into more traditional Golden Age of Reprints content, we find a 10" x 13", 288-page Hermes Press color showcase for Dale Messick, specifically through her well-known newspaper strip drama, which started out in 1940 as a Sunday supplement. The solicitation indicates that this book will include both Sunday and daily content, which began in '45; $60.00.

Creepy Archives Vol. 12: Elsewhere in newsprint but away from all that damned news, Dark Horse brings another 240 pages of vintage horror magazine stuff (that's issues #55-59). With art by Richard Corben (quite a lot of him this time, including a nice killer Santa holiday tale), Reed Crandall, Paul Neary, Tom Sutton, Rafael Auraleón, Jose Bea, Ramon Torrents and others, and scripts by Doug Moench, Don McGregor, Gardner Fox, editor Bill DuBay 'n more. Plus: assorted cut-out games, and the Warren horror comics photo debut of 14-year old Vampirella cosplayer Heidi Saha, subject of the oddest Warren pub of them all, 1973's An Illustrated History of Heidi Saha, a photo magazine chronicling the cradle-to-junior-high dress-up exploits of the title lass, captioned by Forrest J. Ackerman and apparently spearheaded by the girl's parents in hopes of launching a movie career. One imagines a 40th anniversary facsimile edition is not forthcoming from Dark Horse. Samples; $49.99

Sam & Twitch: The Complete Collection Vol. 2: Different time, different horror. This is millennial stuff from the Spawn franchise, which provided something of a base at the time for writer Brian Michael Bendis, fusing crime and vague superheroic background in a way that would get very popular at Marvel very quickly. Frequent collaborator Alex Maleev provides a good chunk of art for these issues (#14-26), though Bendis decamped after #19; $29.99.

Atmospherics: Prior to that, Bendis was publishing crime comics he wrote and drew with Caliber Comics, which also provided a home (via its Calibrations anthology) for this 1996 serial from writer Warren Ellis, at that time only a two- or three-year veteran of U.S. publishing. It's a police interrogation/potential space alien influence piece, previously collected by Avatar in 2002 and now hand-painted into full color by artist Ken Meyer Jr. for a new 48-page edition from the same publisher; $7.99 ($24.99 in hardcover).

Judge Anderson: The Psychic Crime Files Vol. 1: Journal contributor Bart Croonenborghs indicates over at Broken Frontier that this new 192-page Simon & Schuster release of 2000 AD material is one of the publisher's custom blends, mixing stories in a manner different from Rebellion's UK collections, a la the Mega City Masters series of miscellaneous Judge Dredd shorts, albeit with only one writer in charge for this one, psychic law enforcement specialist Alan Grant. The artists are Dredd co-creator Carlos Ezquerra, Boo Cook, Trevor Hairsine and Patrick Goddard (who's done some very nice, inky stuff on Pat Mills' Savage), so the emphasis appears to be on newer artists and super-established 2000 AD figures; $20.99.

You Are a Cat!: Finally, your not-really-a-comic of the week, I suppose - a nonetheless cute-looking Conundrum Press release for writer/artist Sherwin Tjia, who looks to be working a nice cartoon style for a parody of classic Choose Your Own Adventure books invoking all of the difficult choices in the daily life of a house cat; $17.00. 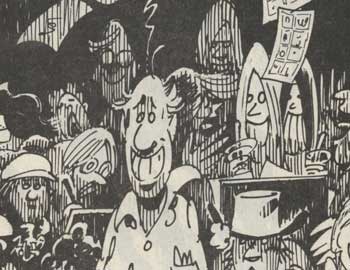 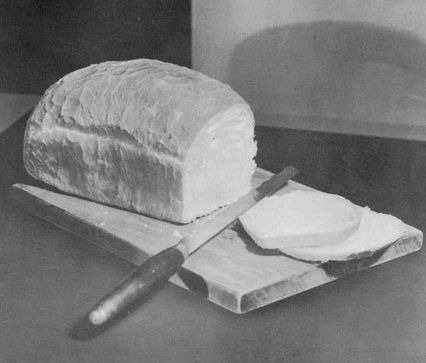