And we have a guest blog from the great Drew Friedman, who just finished this phenomenal portrait of Harvey Kurtzman, and had this to say about the man himself: 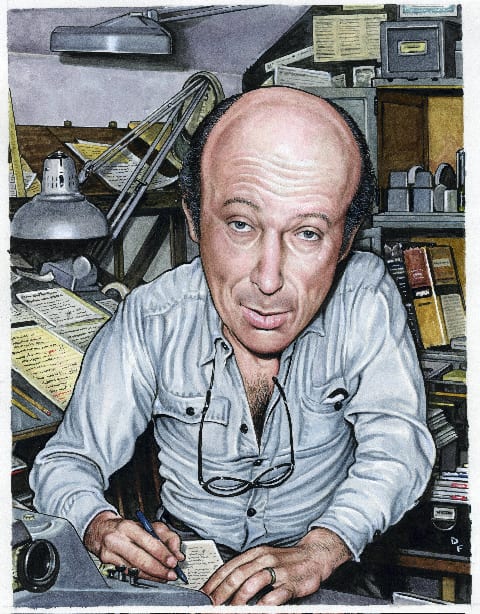 The legendary Harvey Kurtzman (1924-1993) needs no introduction. So here's one anyway. Cartoonist, writer and editor, he was the founder and creator of Mad, Trump, Humbug, Help, etc. Along with his long time partner, cartoonist Will Elder, he spent 20 years producing the lushly painted comic strip "Little Annie Fanny" for Playboy.

Beginning in 1975, Harvey Kurtzman was also a teacher at the School of Visual Arts (SVA) in New York, which is where I eventually met him. In fact, the main reason I chose SVA as an art school was because Harvey Kurtzman was listed as an instructor in their catalog. Growing up as the son of a renowned writer (Bruce Jay Friedman), encountering and meeting various celebrities, authors and performers was common for me, but I always held cartoonists on a higher level. The fact that my dad was actually friends with  Maurice Sendak and Jules Feiffer (author of...The Great Comic Book Heroes!!) was just astounding to me, as my goal from an early age was to become a cartoonist, and in addition, I already knew my comics history. Attending a Playboy authors convention in the early seventies, my father posed for a giant group photo (taken by Alfred Eisenstadt) along with about a hundred other Playboy contributors. Hugh Hefner was prominently up front, with many celebrated authors and artists scattered throughout. When I saw the photo in Playboy, what impressed me the most was that my dad was standing right next to one of my Cartoon Heroes: none other than Harvey Kurtzman! I have no idea if they even spoke to each other but it was still such a point of pride for me. 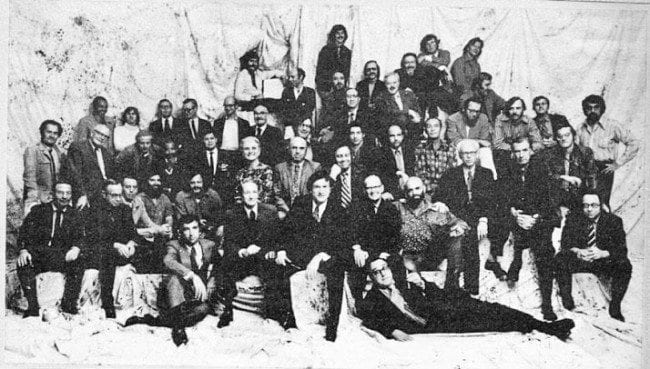 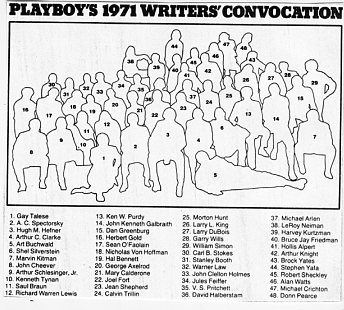 As a teenager in the early seventies, I attended many comic book conventions in NYC, where Harvey Kurtzman was a frequent guest, but I never dared approach him, terrified he'd dismiss me as just another geeky fanboy. Seeing his name listed in the SVA catalog a couple of years later would finally grant me access into his world, or so I hoped.

I eventually signed up for Kurtzman's course in late 1978. When the first class was ending, and wanting to impress him with my opening line, I made my approach. He was sitting at his desk doing some class paperwork and I leaned in and awkwardly stated: "You know my father!" He lowered his glasses and looked up at me with tired, weary eyes, "Who's your father?", he asked.  I answered "Bruce Jay Friedman". Seemingly unimpressed, he murmured, "Oh, the author" and returned to his paperwork. But he quietly did take note, and would always introduce me to visiting class guests by sarcastically announcing "and this is the son of the author Bruce Jay Friedman".

Harvey has been criticized by some for not being a great teacher, but never by me (after all, I wasn't a great student). It actually wasn't important that he wasn't a "great teacher" -- just being in his presence was enough. For some still unknown reason, Harvey chose to teach "gag cartoons" in his class, preparing his students for a career as, say, a New Yorker or Playboy gag cartoonist. Rarely did he bring up the subject of comics, but if a student ever did, particularly referring to his early Mad or war comics for EC, he clearly (to me anyway) took great pride that anyone still cared and was interested in that work. But most of his students just thought of him as their amiable cartoon instructor "Mr. Kurtzman," some perhaps knowing he had some vague connection to Mad and that he wrote that sexy comic strip in the back of Playboy (During one of Gary Groth's extensive interviews with Kurtzman for TCJ, he asked Harvey about teaching at SVA and what the students were like, "They don't know nuthin'!" was Harvey's dismissive reply, which sadly, was basically true). But to me and many others, he was the droopy, turtle-faced Living Legend in our midst, and once a week for 3 hours it was our ground zero, the main meeting place for like-minded young cartoonists, future humorists, comics writers and editors, plus you never knew who might drop in. A constant stream of guest cartoonists could show up at any given time, among them were Robert Grossman, Rick Meyerowitz, Neal Adams, Jack Ziegler, et al. The first time I ever encountered Robert Crumb was when he appeared at the class unannounced. Just as I had avoided approaching Kurtzman at the comic cons, I didn't dare approach Crumb.

Harvey encouraged chaos in his class. At the beginning of his course, he'd hand out balloons and ask everyone to blow them up till they exploded, simulating the "surprise" you should get from a cartoon punchline and leading to inevitable hysterical laughter from all. I've often referred to his class (and SVA in general) as "The 13th grade" or "Clown College."  As the cartoonist Kaz has mentioned, "Drew went into SVA knowing what he wanted to do and left SVA the same way"; meaning, I was hard if not impossible to "teach." As far as classroom insanity, Harvey usually enjoyed and encouraged the Three Stooges noises and the endless insanity, often instigated by me. He once even quietly took me aside during class to "thank me" for keeping things so lively. But Harvey was also very sensitive and fragile, and sometimes prone to tears, especially at that point in his life when things perhaps hadn't worked out as he had hoped, and Little Annie Fanny was his main bread and butter. Some days he'd arrive at class and was clearly not in the mood for the hi-jinx that would surely ensue. Oh, and let me go on record and address one particular false rumor that has plagued me for years. I did not hurl a desk out the window during a class! It was a fellow student I hurled.

I'd like to think Harvey and I were friends, or at least as friendly as a wise-ass student could be with his teacher. I was frequently asked to join him along with class guests and certain chosen students (among them, Mark Newgarden, Dave Dubnanski, Phil Felix and Mike Carlin) at the after class get togethers at his favorite Irish bar, The Glocca Morra, around the corner on East 23rd St,  where he could finally unwind and reminisce about the old days at EC, Bill Gaines, Will Elder's practical jokes, his theories about coke bottle design, politics (he admired Ronald Reagan!) and women.

I was proud that Harvey always seemed to "get" my work or at least appreciate what I was doing and the painstaking detail I was putting into it (he referred to me once as the "new Wally Wood"... Yikes!). He seemed to take pride in the fact that after I graduated I was getting attention and being printed in mainstream publications like Heavy Metal, National Lampoon and Spy. He even wrote a foreword to one of my books. After SVA, I saw Harvey only a few more times. One summer he called me out of the blue and asked if I'd like to edit a humor magazine for him. I was floored by the offer and said "Of course!!", which is when he earned one of his nicknames, "Harvey the Vague." That's the last I ever heard anything about editing a magazine for him. Harvey died in 1993 after suffering for several years from the ravages of Parkinson's disease, but his legend has by no means diminished, in fact it continues to grow. Aside from the recent coffee table book about his career from Abrams and the deluxe Humbug box set from Fantagraphics, a massive biography is in the works, which will cover in detail his SVA years, as well as a film documentary. During my recent interview (along with Gary Groth) with Jack Davis at the Brooklyn Comics and Graphics Festival, Jack continually brought up Harvey as the best editor he ever worked for,  giving him full credit for pushing him in artistic directions that would eventually make him one of the top commercial illustrators ever.

It was after our talk with Jack that I was inspired to create this portrait (based on a mid-seventies photo by E. B. Boatner) of Harvey Kurtzman, posed in his attic studio at his home in Mount Vernon, NY. 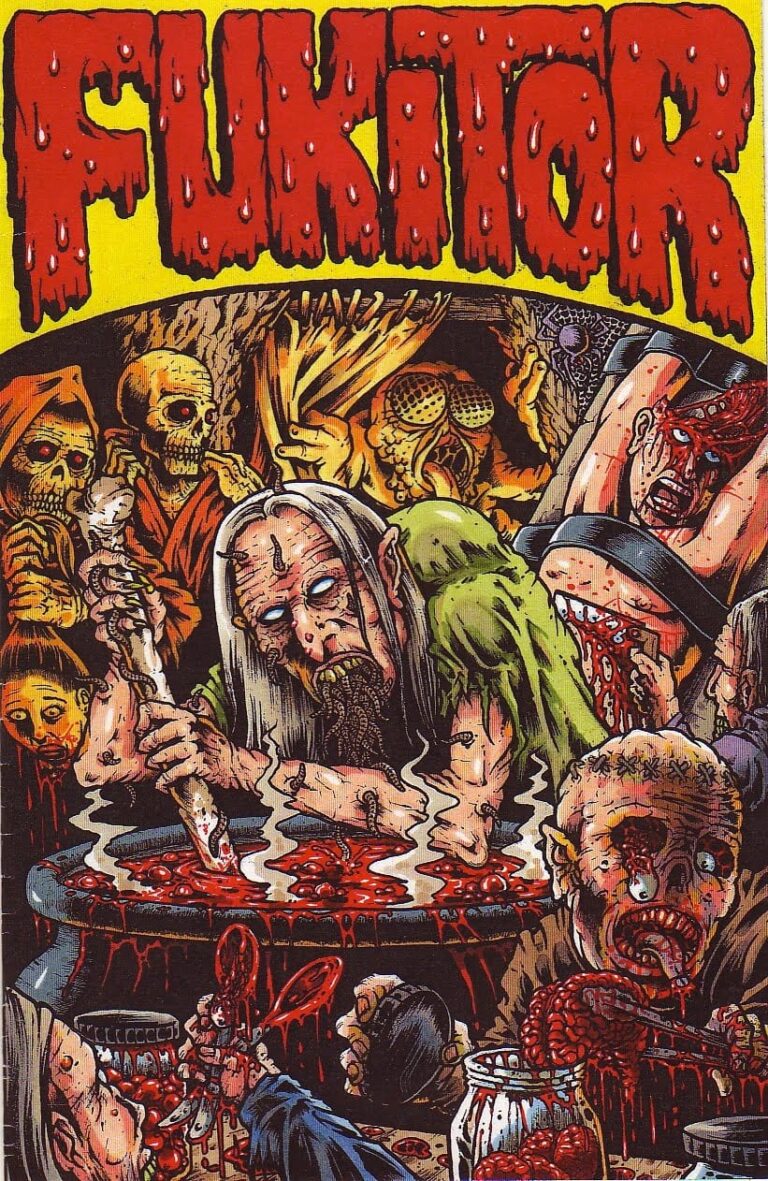 An Interview with Jason Karns 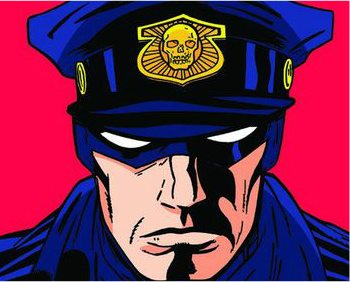