Today, Alex Dueben has an interview with Michael Maslin, the cartoonist and author of the recent biography, Peter Arno: The Mad, Mad World of The New Yorker’s Greatest Cartoonist.

I wanted to ask about Arno’s stolen car cartoon because in 1929 when it was published it was controversial and really divided people at the magazine about Harold Ross.

I do spend a little time on that because it’s an interesting dividing line. It created these two camps: did Harold Ross know what this cartoon meant or didn’t he? According to Thurber, Ross said the cartoon had an Alice in Wonderland quality to it and it wasn’t about sex, it was just an interesting drawing. I assume t 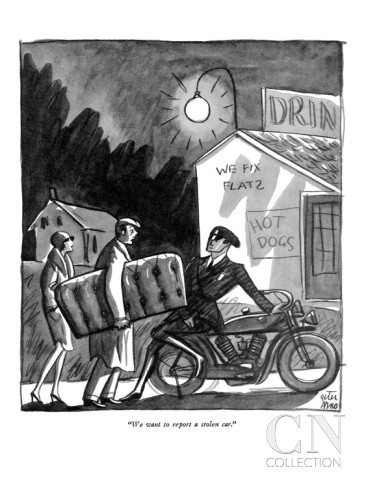 hat drawings are selected sometimes because the editor sees them as something other than the artist does. I don’t know if that’s really true in this case. I love the drawing; I think it’s a beautiful drawing. It’s definitely about sex. Why else would they just have the back seat?

—Speaking of New Yorker cartoonists, A Case for Pencils has a short interview with George Booth.

George: Well, I’ve been drawing since I was 3 and a half, and my mother encouraged me, and I think it’s very important, for young mothers. Whatever they influence the little squirts to do, may be what he’s going to do all of his life. And that was, in my case, what it was. My mother was an artist. When I drew a cartoon of a Model T Ford stuck in the mud and I laughed about it–and I laughed and I laughed– it caught her attention so she started to encourage me to cartoon.

George: [laughs] Sarah says I still laugh at myself! But that’s the way it should be. You should enjoy what you’re doing.

—And in the same magazine, Alexandra Lange profiles Luke Pearson, who as you may have heard, has a new series based on his Hilda comics coming to Netflix.

When Pearson was still in school, in 2009, he submitted a one-page drawing to a competition run by Nobrow, now his publisher. “She’s basically wearing her outfit”—beret, scarf, red top, blue skirt, and big red boots—Pearson said, of Hilda. “She’s standing at the end of a pier, with a Scandinavian-esque city behind her and all kinds of creatures around, including a giant troll and a zeppelin in the sky.” A similar scene occurs in the third Hilda book, “Hilda and the Bird Parade,” but at the beginning Pearson didn’t have a story, just this “curious image” of a small girl with blue hair and a question: “Where is she and what does she get up to?”

—And the most recent guest to the RIYL podcast is Gabrielle Bell.

An Interview with Michael Maslin 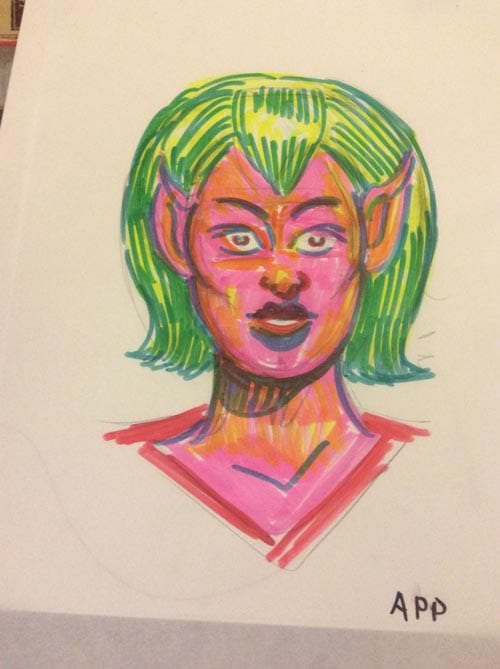