Small Press Comics Explosion was a mid-1980s magazine about North American minicomix. It was put together by Tim Corrigan out of Rochester, New York. Originally it was a digest-sized zine and then a low-budget high-print-run magazine-sized magazine. Mr. Corrigan passed away in August of 2015. When I heard the news, I pulled out my issues, and they've been kicking around the house since. 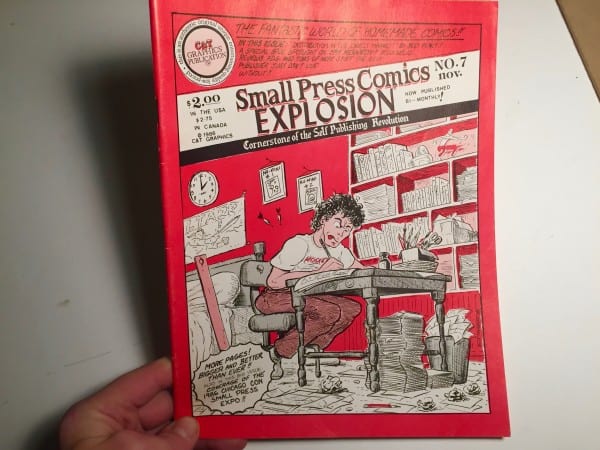 I wonder what's happened to most of the comics-makers in these little time capsules. It's ship-to-shore forever with their message. Meaning the transmission of information is something like hearing Morse code in a thunderstorm. It's barely decipherable, actually, as Mr. Corrigan seemed determined to fit as many listings, ads, and news announcements into the live area of each page. I rather like the effect, which makes it feel like a ton of shit is going on even if there wasn't really a ton of shit going on. Or good shit anyways. Some of this stuff may be better left in a bottle in the ocean from the looks of the ads and descriptive reviews. 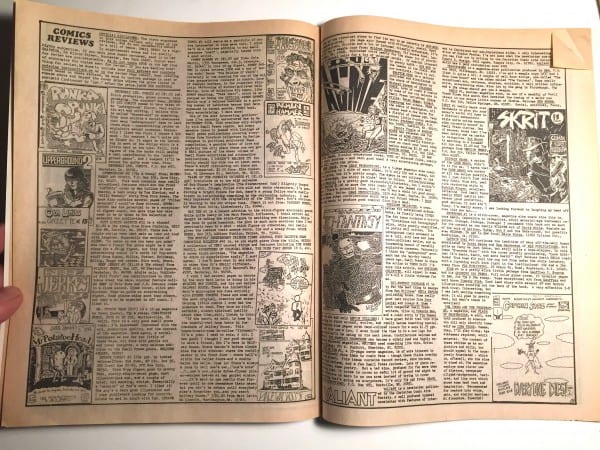 According to The Minicomix Revolution 1969-1989 by Bruce Chrislip, Corrigan "soon started distributing SPCE through the direct market chain of comic book shops and the print run quickly increased from 200 copies to 2,000 copies." Chrislip explains that Corrigan would review just about anything. Soon "it became a tabloid [...] and an avalanche of hundreds of small press comix showed up in his mailbox. So much so that it would be impossible to do a complete history of every minicomic published from 1986 on. There were thousands of different issues. Some were fantastic, but many were crude first attempts by fledgling cartoonists." (Emphasis in the original.)

It's true. So much of it looks like dreck, and sounds worse when described in eloquently baroque micro-blocks of text. It was, it seems, the real full flowering of xerox machines becoming widely available, and SPCE documents that perfectly. It captures it even in its presentation. The whole thing reads like one giant blog post as Mr. Corrigan simply reviews and hypes up a different minicomic in each paragraph of his long review section. It's not alphabetized and it seems as if he reviewed whatever got delivered by post that day and then just kept adding to the column until it was one long brick of tightly packed lines of type from an old typewriter. For example, in the beginning of one review section he writes about Transformer #3 and says it is the first issue of the Pittsburgh mag that he's seen. Seven tightly packed pages of type later, he reviews Transformer #13 and says again that it is the first issue of the Pittsburgh mag that he's seen. Well, since Transformer was a monthly book, that probably means a long time went by between Mr. Corrigan beginning to write the review section and its completion. He must've just added to it (again and again like a blog) and just crammed in as much info as he could. This is great, don't get me wrong. It's just a little maddening to read without a magnifying glass.

I'm not complaining. I love poring over the columns of type and puzzling the whole thing out. It takes hours just to skim it. And it paid off as I found this little gem of a letter from a young Scott McCloud. It seems in an earlier issue of the magazine a debate raged over the terms "small press," "alternative," "independent," and "underground."

Dear Tim-- You wanna know why I think "Small Press" is the best term for what we are doing here? Because no one can ever take it away from us! One of the reasons the underground scene hasn't endured longer is that somewhere along the way people got this narrow idea of just what "underground" was and what it was not. Suddenly a whole generation of artists found the doors to the underground locked just cuz they weren't "underground" enough. That'll never happen with Small Press, because the term is just too clinical. If it's got a small print run and it's a comic, then it's a small press comic! No more closed doors. Believe it or not, this was the concern that first prompted me to do my column for Amazing Heroes. At the time, almost everyone knew SPC's as either "newaves" or "fanzines" - both unacceptable terms if you ask me. [...] I'm a "professional" who started doing fanzine work, but I would have made far better use of my time if it had occurred to me to make my own comics instead of just aping another company's product. I strongly urge all young writers and artists to do their own comics and let the big two take care of themselves! We all have stories to tell! Let's see 'em!! --Scott McCloud, Tarrytown, New York 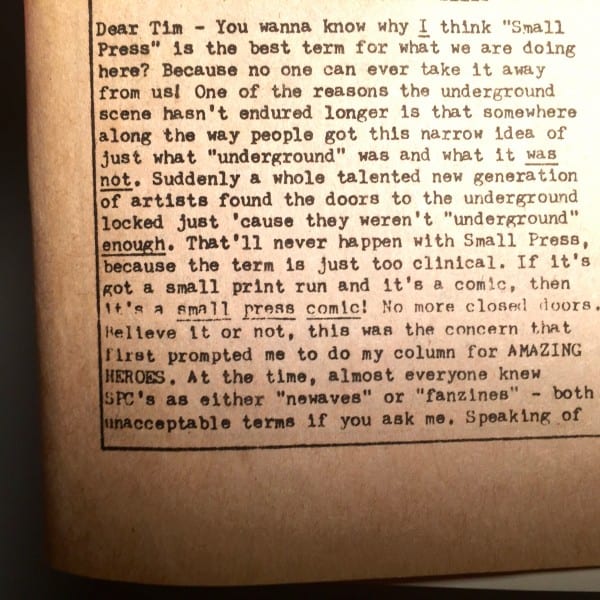 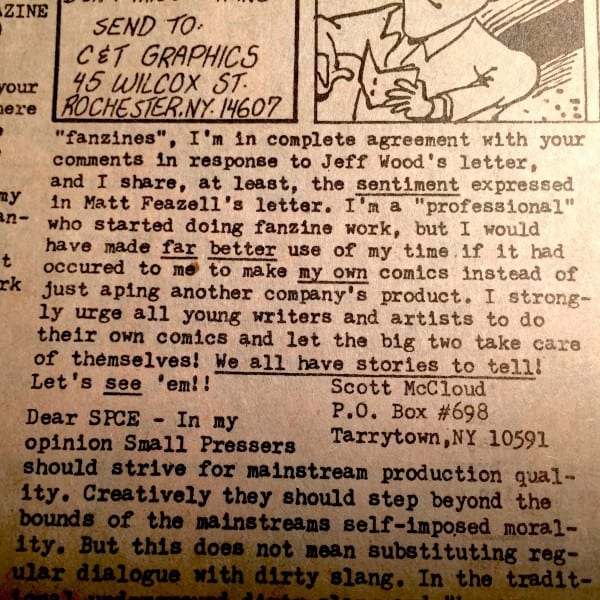 Later on in the mag and in the following issue there is more space devoted to this argument over terms. Small press? Alternative? Indy? Underground? New Wave? Fanzine? Comix? Comics?

I think it's interesting to see that "Small Press" seems to have won the war of words, more or less. I still can't get with "comix." It's too much associated with "Underground" comics of the '60s. I don't really care for "mini-comics" either to tell you the truth. There was a whole "mini" craze in the late '80s and early '90s: mini cookies, mini lighters, mini backpacks. I made my comic at that time an oversized tabloid newspaper because I wanted to get away from the mini-comics ghetto, honestly. So to me, "Small Press" makes sense because then you can ratchet it all the way up to the rarefied air of "artist books" or down to mini-comics and fanzines.

Still, it's ship-to-shore forever with our message. Indelible with everything that's precious. Part of me is always looking back to see it's over.

Meaning, the mini-comics revolution is still going on. But it's also over. That's what SPX is. But see, that's not what SPX is. It's not "alternative" really anymore. Oh wait, that was APE (the Alternative Press Expo). The terms are important, I think, because mini-comics will always sound like "squirt football" to me. And SPX is anything but squirt football. Maybe some of it is very amateur, but that is the point of this big small-press playground. You can tour the ghetto of mini-comics festivals and still mix it up with the NY Art Book Fair people and Printed Matter. 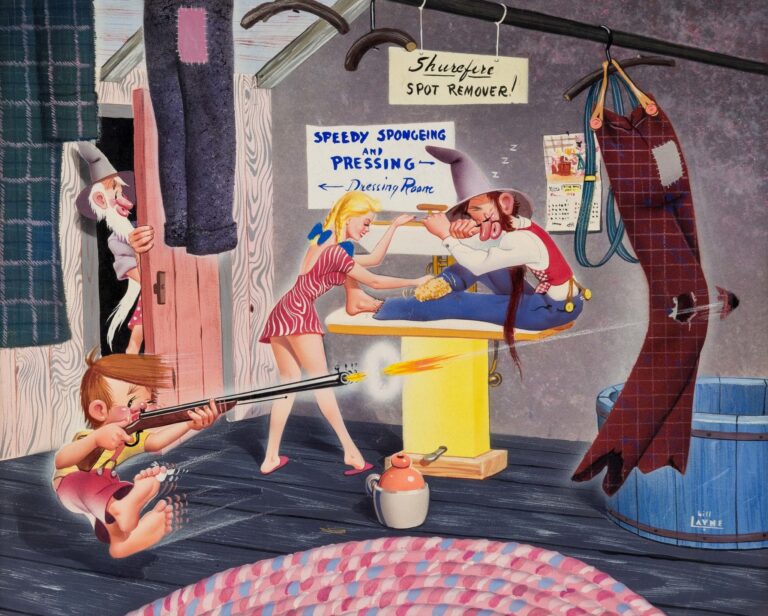 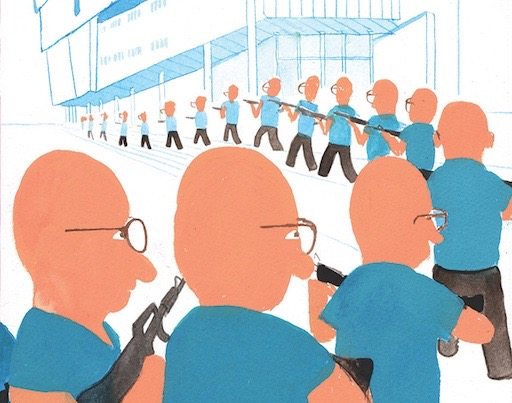 Useless to a Reader