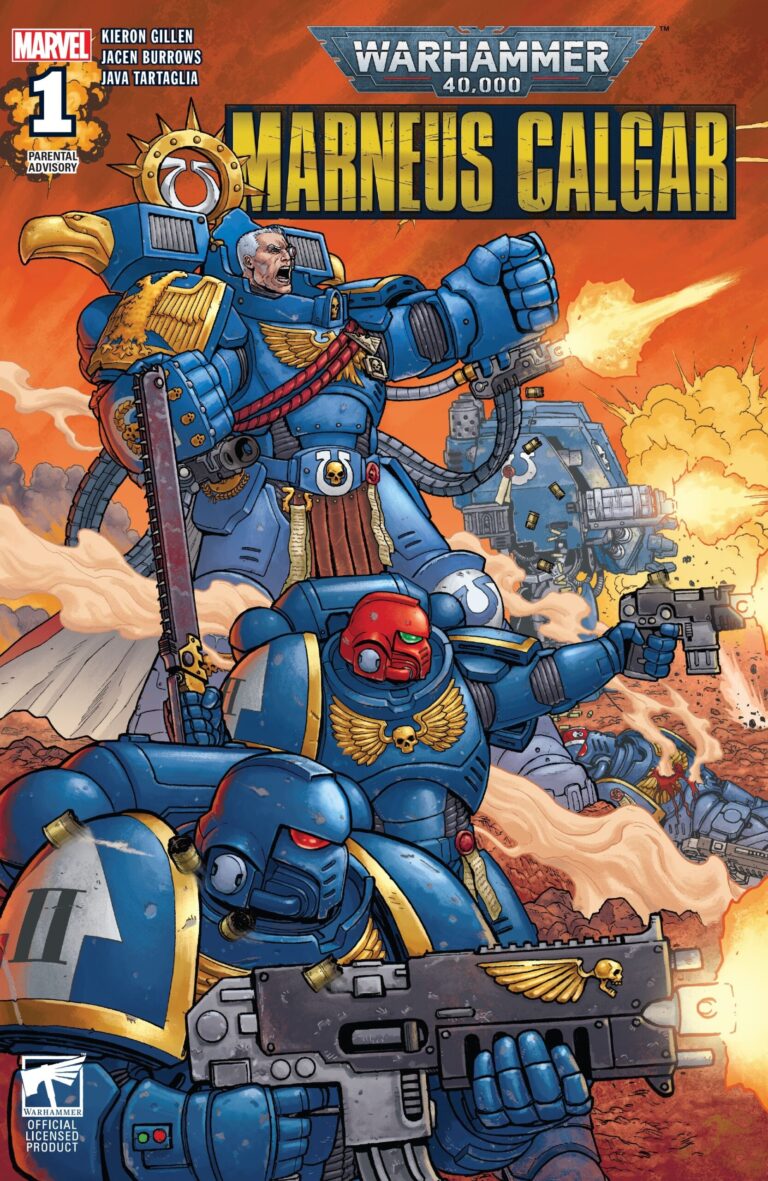 I find myself in the odd position of being a Warhammer 40,000 fan without having once played the game or owning, never mind painting, a single miniature, just a fan based simply off of its aesthetic and some of its published fiction. I guess the equivalent would be becoming a Doom fan based on the licensed novel Knee-Deep in the Dead – a heresy all of its own! Marvel have recently acquired the comics rights for the popular tabletop game, joining a slew of property acquisitions (Star Wars, Alien, Conan) that seemingly aim to bring the publisher back to its 1980s heydays of finding financial success by publishing Transformers and G.I.Joe comics. It’s very odd indeed, to think that the empire of the mouse is now the publishing home to an empire of a different kind, one that is built on bones and blood and guns the size of several trucks welded together, wielded by people by people whose body proportions make the Hulk appear like a pencil-necked geek.

Marvel’s first entry in what is a sure-to-be over-saturated franchise (I expect the Ultramarines to fight the Guardians of the Galaxy by 2021) is Warhammer 40,000: Marneus Calgar, written by Kieron Gillen, colored by Java Tartaglia, lettered by Clayton Cowles and drawn by Jacen Burrows. That last one is my main draw. While Marvel has some ‘better’ artists in its rolodex, there isn’t anyone else whose name conjures the appropriate imagery of ultra-violence. Birthed in the spawning pools of 1990s horror comics and further enchanted through years of Avatar Press output, Burrows developed just the right style to depict the world of Warhammer 40,000. 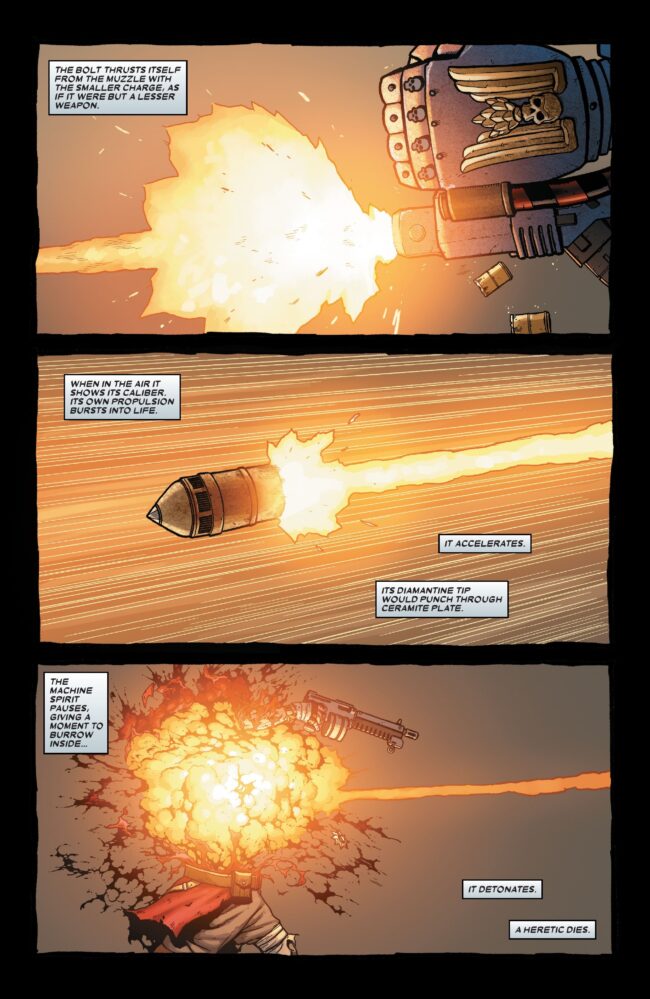 In case you don’t know the score, the introductory page lays it out: We are in the far future, humanity has spread through the stars; it has found other living things in those stars and it now wages an endless war against them – ‘no hope, no peace, no love.’ You are not here for all the extraneous bullshit, you are here to see things blow up, but good. Arriving from the same British school of thought that birthed 2000AD and Action, Warhammer 40K exists in a state something between a proper adrenaline-fueled dream of an angry 13 boy and a parody of one. To quote famed British philosopher Lemmy Kilmister, "Everything louder than everything else”.

We can see already in the first page that Burrows is natural fit to the story: the first panel showcasing his obsession with the small details on his weaponry (even if it’s a fictional one) – a big gun attached to an even bigger glove, spewing muzzle flash as the casings drop to the earth. The second panel, showing his kinetic skill – the bullet in flight, you can almost hear the sound as it cuts through the air, slightly askew against the lines of the background signifying its investable landing right on target. And panel three – the impact, a body obliterated as the upper half becomes a mix of fire and blood (kudos to Tartaglia for finding the different shades of a torso exploding outwards).

The following page is the big money shot, our titular hero standing on top of staircase, shooting down at his enemies. It’s a classic pose, we’re looking at Marneus Calgar from below, enchanting his already massive size in our mind’s eye. His enemies are not only physically smaller than him but they are so weak that he is mowing them down like wheat. He is marching towards them with a grim self-assurance – they will not stop him, they will not even slow him down. The bodies are already piling high.

So yes, it is brutal – as a Warhammer 40,000 comics should be; but is it brutal enough? Writer Kieron Gillen, who appears to be a big-time fan of the franchise, writes the story with conviction, the tongue far away from any cheek. He takes the story and the world at face value. This is a smart choice. The humor is inherent to the absurd nature of the settings, you are probably going to find it ridiculous either way, so the creators might as well play it straight. The second issue continues on this path by offering a twist on the expected narrative which gives our protagonist (again, a ridiculously massive man in power armor) some much needed depth and pathos. As a writer, Gillen does everything right.

So why am I not satisfied? 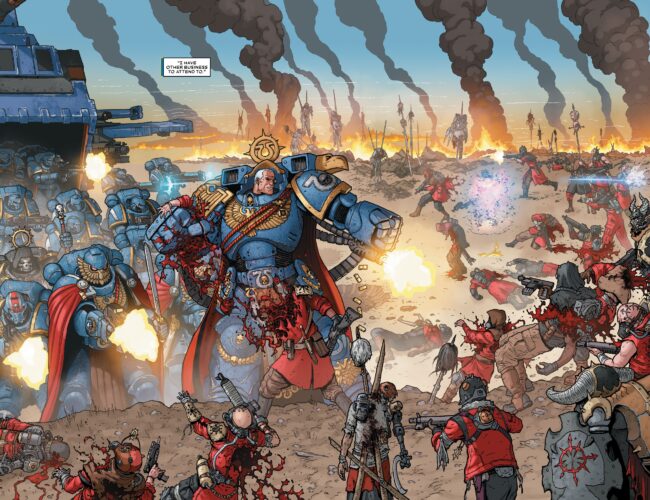 I think the problem of Marneus Calgar is that it feels a bit too scripted. Overly tamed. Warhammer 40,000 is not Star Wars, it’s not a space opera, it’s a space death metal concept album. It should be a place to run wild, to be nasty and angry and over-the-top. But after the first few pages of action the first issue is simply too relaxed; there’s lots of walking and talking (Aaron Sorkin’s Ultramarines). There’s only one other action scene in the first issue, which is limited to a double page spread.

This is, again, technically impressive. There are big people with big guns, shooting at small people with smaller guns; there are people stuck on pikes in the background. Marneus is shooting through three enemies with one hand while removing the top half of another with his other. If I were sixteen this would probably be my computer desktop for a good long while. And yet… it fails to satisfy. The action is locked into a single image instead of spread throughout. We see not so much the carnage but its after-effects. 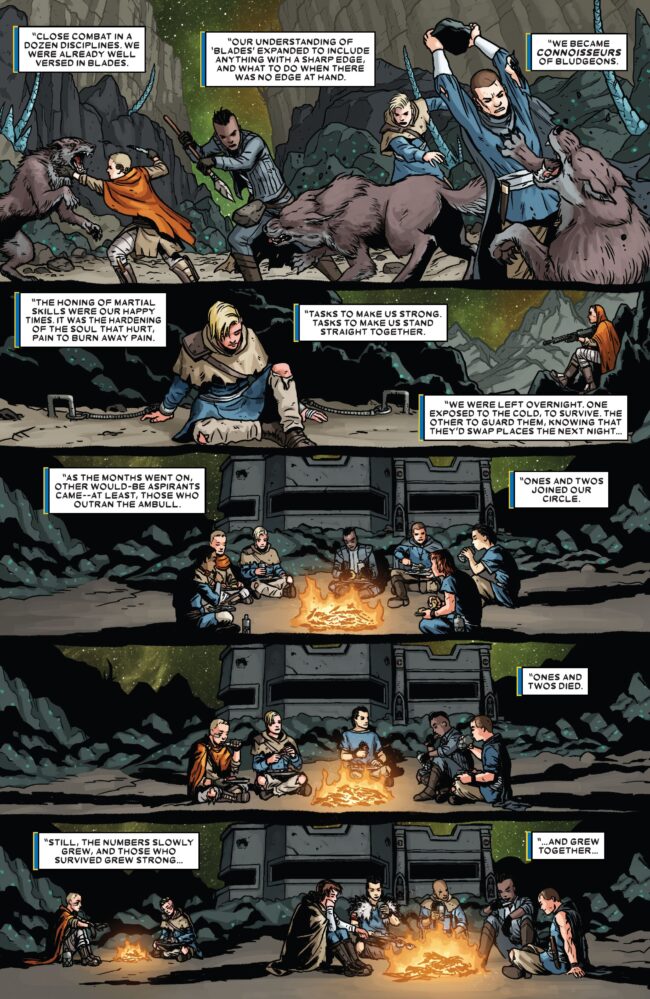 This is a misuse of Burrows' finely tuned skills not just for gore but also for constructing action on the page: the man knows how to layout a proper shootout, but the script keeps him in montage mode. Which means we never actually see the gnarly, nasty, stuff. The end result feels like an intellectual approximation of teenage rage rather than the real thing. Marneus Calgar is far from a bad, it has great art and knows all the right moves to craft a decent sci-fi shoot’em up; but like its lumbering protagonist it comes across as too calculating for its own good, as if it exists at one remove from its own narrative voice. My hope is that series can pick up the pace, and possibly pick up some more of that Burrows charm - let him do what he does best (even if it is not very nice). 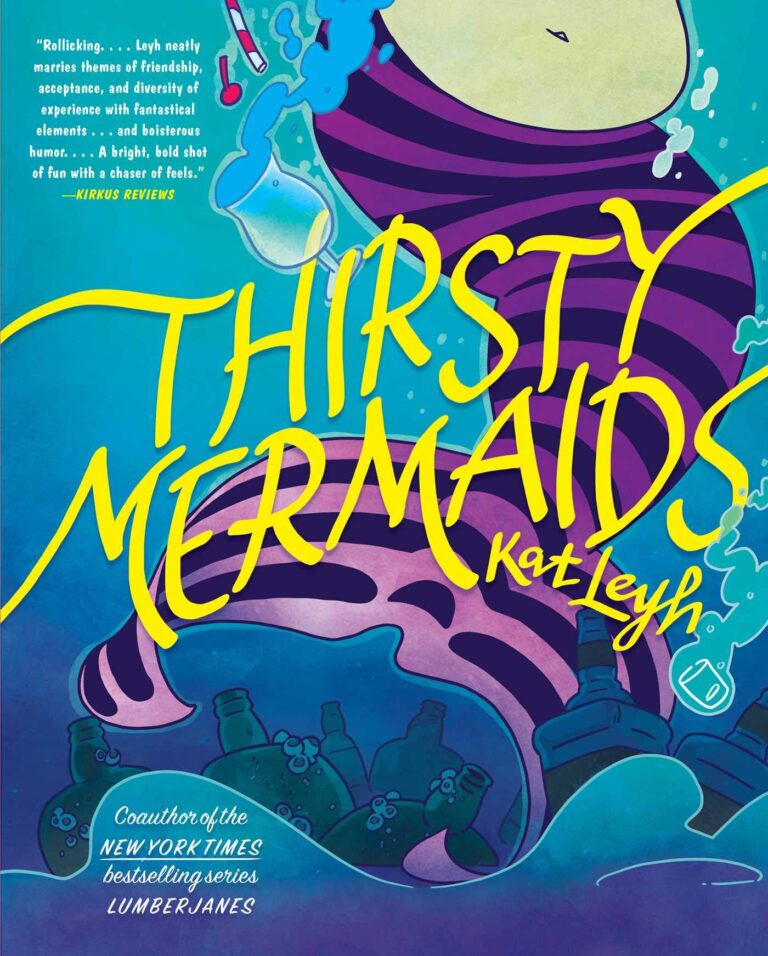