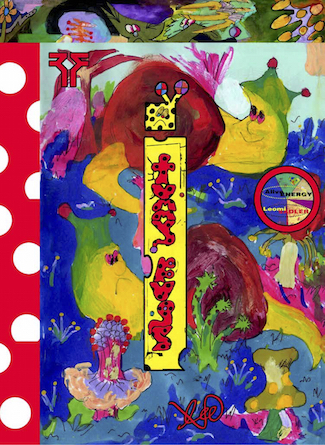 You may know Leomi Sadler’s work, if not her name, from its appearance in volumes 8 and 9 of Kramers Ergot. There, the strips read to me as a post-Paper-Rad exercise in the willfully childlike. Painted watercolor textures served as a backdrop for ballpoint pen drawings. Declarative dialogue depicted thought processes or internal monologues more than they suggested the building of consistent characterizations. If the shapes of those figures appearing suggested toys could be molded from their designs, no names were ever given to any of them. It may not make the strongest impression, but in the context of an anthology, that’s not necessarily a detriment. It fit neatly enough into an understanding of what art comics were, or could be, that no one objected to the inclusion the way they did reprints of Penthouse’s “Oh Wicked Wanda” strips, appearing in the same volume.

Tummy Bugs is the first installment in a “Leomi Library” planned by publisher Breakdown Press to collect the artist’s extensive body of work, which were previously printed in zines and anthologies. Most of the strips in Kramers Ergot 8 reappear here, with one piece that had ran in black and white now in color, others recolored slightly, and one page that has been digitally stretched so each panel is taller. A long science-fiction strip I remember being a high point of Mould Map 3, a series Sadler co-edits, will presumably be found in a future volume. This collection is oriented around the cute stuff, although cute is a relative term, and here the notion seems invoked with some irony. It’s a colorful thing, but the colors clash and overwhelm one another until they cancel each other out, like candy and fruit dissolving into stomach acids. Sadler enjoys an acrid palette. 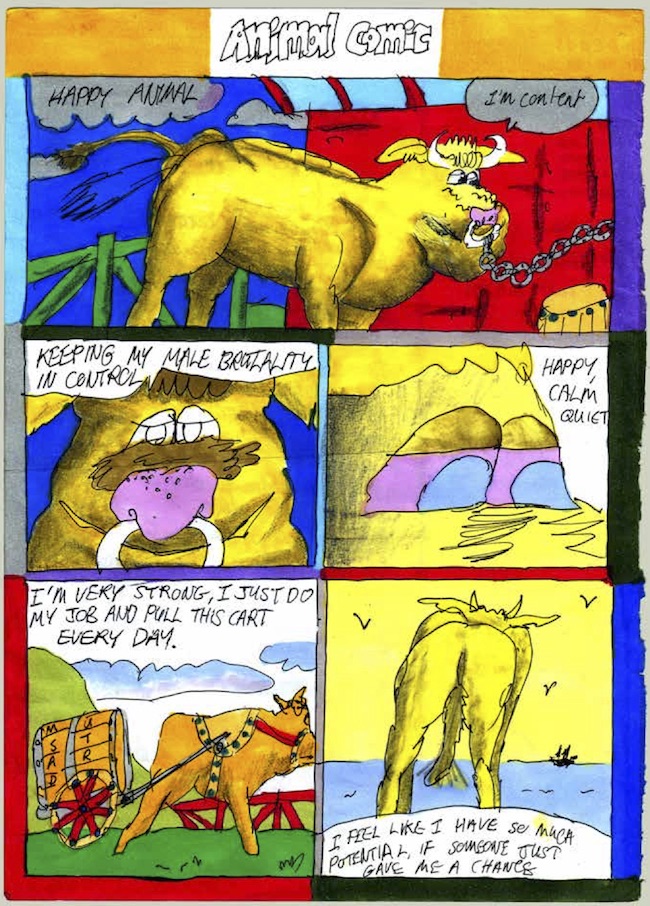 Her narratives feel abbreviated, scrambled by what’s elided. Jarringly dissonant elements are introduced suddenly, strips seem to end too soon. They’re not quite abstract enough to be non-narrative, instead feeling specifically like distracted attempts at telling a story, like the work of a child who is making things up as they go. One strip that ran as a one-pager in Kramers Ergot 9 appears here blown up so that each panel takes up a full page. The colors are again changed, but their distortion is similar to what you get scanning a printed image at too high a DPI, and register pixels of red hidden in black ink. Without being united by the appearance on a single page, it might not even occur to view the reading experience as a single piece across the course of its nine pages. The interjections and non sequiturs that make up Sadler’s pace come off as potential juxtapositions of disparate works. The gnarled digital texture achieves an effect similar to the various paintings of Sadler’s found throughout the book.

These paintings are, I think it’s safe to say as a value-neutral statement, pretty ugly and fucked up looking. The horizontally-oriented ones get reproduced in two-page spreads, running across the book’s binding, which does them no favors if they’re aiming for anything else. While the comics might not present fleshed-out narratives, the paintings, with their own visual language of blobby colors and dissolving forms, are still contextualized by the more straightforward presentation of emotions and humor found within those comics. Paintings in a gallery context are often accompanied by an artist’s statement providing an explicit meaning, which comics do not: By putting both into a book together, on equal footing, the comics serve as an elaboration of intent, a rationale for why no further explanation is necessary. The paintings suggest the ugliness the comics keep partially at bay through the shapes of the drawing, the form of the gag strip. In turn, the paintings recast the use of color within the comics: If the round shapes and cartoon eyeballs scan as cute within the comics, the abrasive color palette that reads as ugly within isolated paintings becomes a part of the foundation, an underlying tonal layer.

Two paintings showing similar composition appear consecutively: A figure, laying with open arms upon the ground with a distorted figure hovering over it, menacingly, in the same position. The forms are different enough one knows not to read them sequentially, but attention is still called to their similarity. From both, I infer a vulnerability about to be marauded.

A handful of times, reading these comics, I thought “are these about child molestation?” In the world of modern art, childhood as subject matter is primarily about the traumas one is vulnerable to, a subject comics for kids usually avoids. The juxtaposition of comics and paintings here, where the language of childhood drawings ends up suffused with nauseatingly discordant blobs of painted color, retains an ambiguity. I can’t tell if real-world horror is being alluded to, or if the discomfort is being stirred up carelessly in a spirit of play. Normally the position I take with regards to difficult work is to not worry about whether or not I understand it analytically, and just experience the feelings that it presents. With this one, I felt like I did actually understand it, but I distrusted my judgment, because these elements emerge so abruptly, as these dissonant stabs, cutting through the cute surface. 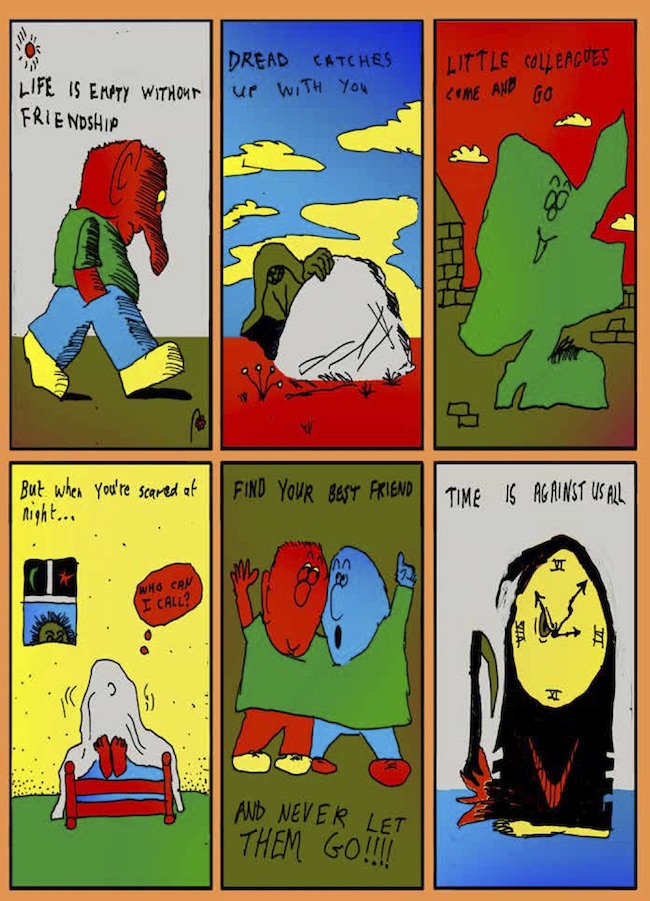 There’s nothing overtly sexual about any of these pieces. The things that register with me as seeming “off” are primarily depictions of physical touch, like a group of weird critters pressuring a kid to roll himself into a ball in one of the first stories that feels longer than the others, at four pages. Because the stories largely seem plotless, death seems less present as a danger employed for the purpose of suspense than a recurring intrusive thought. This, then, presents a neutral affect: Either there is no real danger, or it’s a sign of psychological troubles suggesting something has already gone horribly wrong. These comics could just as easily be about the discomfort simple, essentially harmless, childhood experiences elicit when viewed by an adult. If, as the Damien Hirst piece says, there’s a “physical impossibility of death in the mind of someone living,” so too is innocence an impossibility to reconcile one’s consciousness to once one has gone through adolescence and adulthood. “Tummy Bugs” is a cute title, made of two cute little words, but the phrase itself exists to give kids a language to describe feeling uncomfortable or nervous. I am unsure what the work in this book is specifically doing, but going by the title, it seems successful in achieving its nebulous goals. 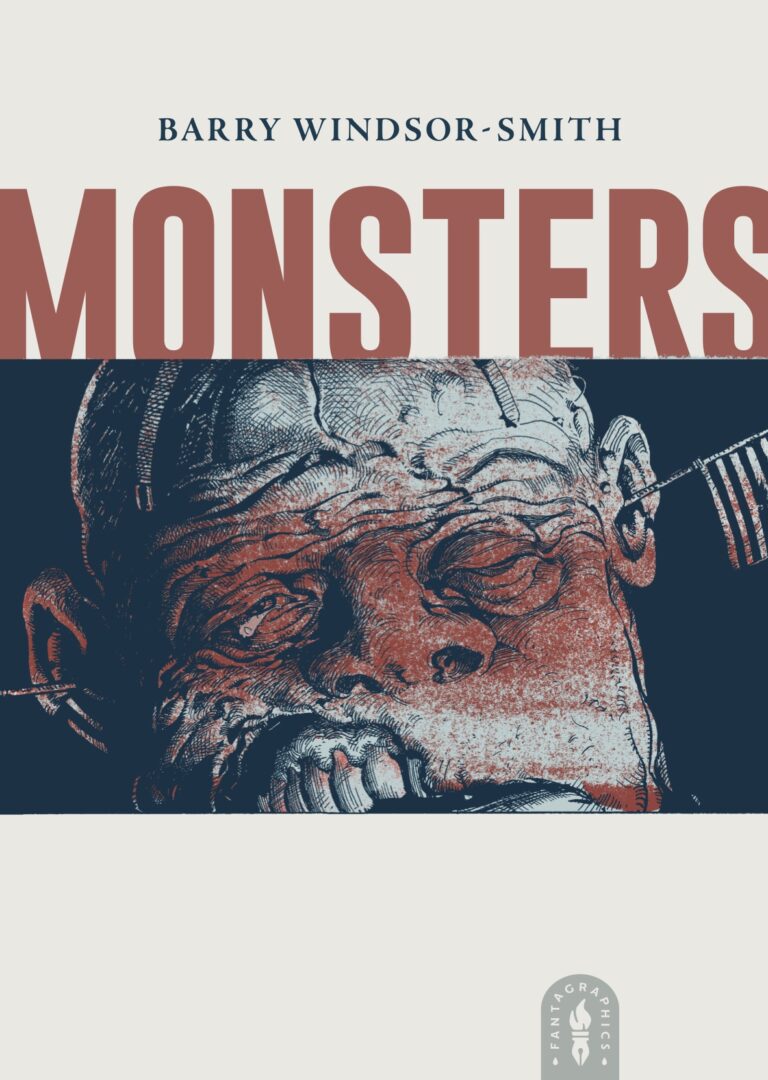 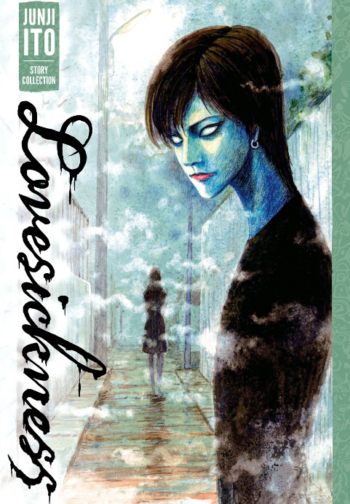