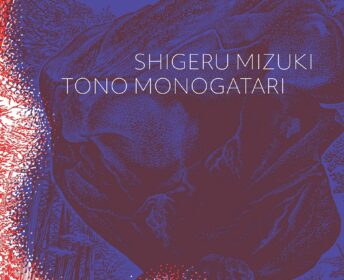 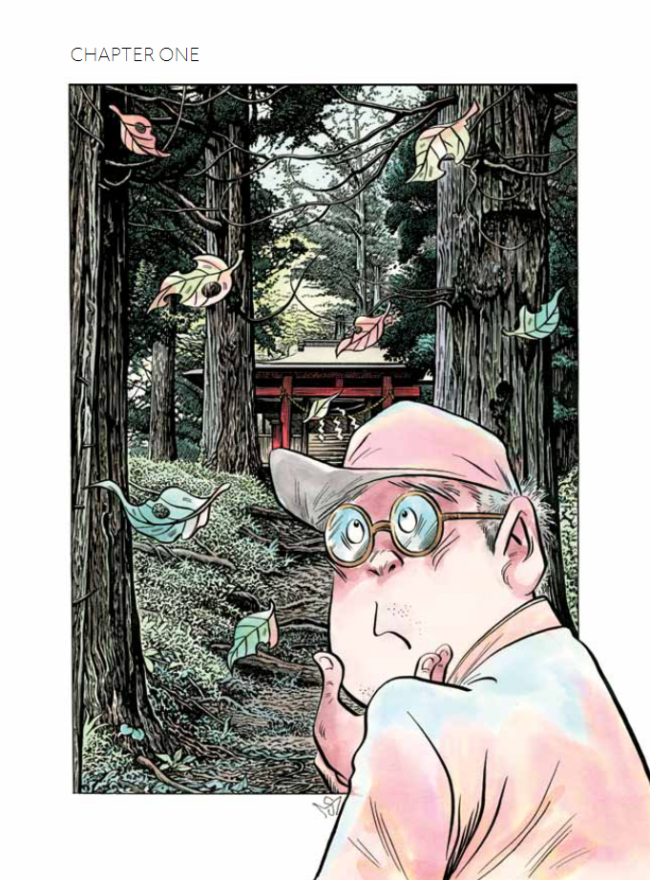 “Mizuki was a past master at western-style ghosts and black magic, and a very hard act to follow [...] Mizuki Shigeru's Kitarō had a modern, pop-art sensibility.”

“But when it comes to problematic remembrances about Tsurita, Shigeru Mizuki’s comments about her time at Mizuki Pro, made on the occasion of her death, certainly take the cake. “She was thin, and if one were generous you might also say she was pretty… She was a diligent worker, but wore these short skirts that made her smooth legs visible for anyone to see. I feel like Tsuge [Yoshiharu] was always staring at her legs, too.” Tsuge says he barely remembers her. Though he doesn’t mention Tsurita, another Mizuki assistant fondly recalls frequent staff trips to cabarets and deskside joking about strip clubs and conquests at sex establishments. Who knows what Tsurita actually experienced while at Mizuki Pro. But it is easy to imagine that the environment was less than ideal. Little wonder she stayed only a month.”

-"The Life and Art of Kuniko Tsurita"
The Sky is Blue with a Single Cloud, Ryan Holmberg & Mitsuhiro Asakawa, eds.

The two quotes above reverberated through my head, albeit for different reasons, as I paged through Tono Monogatari, Shigeru Mizuki’s late-career adaptation of the collection of Japanese folk tales of the same name by Kunio Yanagita. By reputation, Mizuki’s manga have come to stand as a conduit to Japanese folklore for children all over the world and comics readers of all ages - and, in North America, that readership trends highbrow on the reputation of the late mangaka’s publisher in English translation, Drawn and Quarterly. Since Mizuki was the first extended brush with the world of yōkai for many of us comics critics and readers, it should not be surprising that many of us default to viewing him as the de facto creator of legends that, in fact, began life as regional oral traditions without a clear author. This tends to mystify the work of Mizuki, an artist with a strange trajectory, from kashihon huckster to leftist magazine darling to pop culture titan. He was a man literally crippled by his military service (he lost an arm), who drew from a vast well of Japanese tradition and literature to create hit comics in a studio system, leading a production company (Mizuki Pro) with assistants.

Mizuki’s comics communicate traditions, but they are not ‘traditional’.  As critic Takeo Udagawa’s passing remark in Manga Zombie indicates, for Japanese readers of the time, the style Mizuki brought to his yōkai comics was one of postwar modernity and western influence. Mizuki’s first comics included Superman and Plastic Man bootlegs, and the influence of American pulps on his craft is well-documented.[1] This would suggest a very different exotic appeal to Mizuki’s work than the Nihonophile gaze which western audiences bring to it. Holmberg's and Asakawa’s essay highlights a culture of institutional sexism at Mizuki Pro, and an appalling admission of sexual harassment from Mizuki himself. This is a systemic problem, not an individual problem, indicative of the pervasive and normalized misogyny of Japan in the 1960s which extends both to comics culture and leftist movements of the time to a damning degree. Nevertheless, this is Shigeru Mizuki. For better or worse, that is the man and the production climate, the concerns of which are reflected in his work. 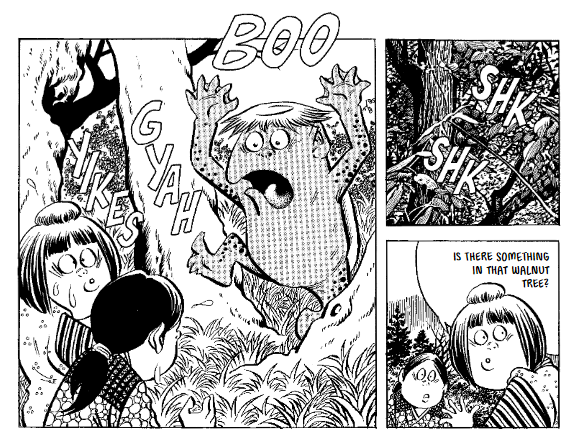 Tono Monogatari was originally published in 2010 to commemorate the 100-year anniversary of Yanagita’s anthology. Most chapters begin with an elderly bespectacled Mizuki, no stranger to serving as narrator/spectator to national stories in his own comics, wandering around modern day Tōno, flop-sweating his initial narration in front an ornate, photoreal illustration of local scenery for the reader’s enjoyment. After a couple pages, each brief drama drawn from Yanagita’s Monogatari closes with a little panel of Mizuki, looking upwards with a quizzical, almost bewildered expression, exhaling from his labor and maybe adjusting his glasses, making a little explanation of surprised clarity at what he’s seen to the effect of boy, that sure was something, huh? The traditional stories of the city, which Yanagita recounted in his anthology, emerge from the scenery of Mizuki’s tour and seem to evaporate in their most climactic moments, leaving the grandfatherly image of Mizuki to wink knowingly at the reader. Mizuki makes Yanagita out to be something of a god or a guardian spirit himself. Yanagita’s authorial presence inhabits the land and its stories on every step of Mizuki’s pilgrimage: “Just like Ol’ Yanagita said,” Mizuki coos humbly in Zack Davisson’s folksy translation. Finally, in a dream, Mizuki meets Yanagita, giving Mizuki a chance to compare and contrast his own approach to yōkai stories with Yanagita's in conversation with the author's spirit.

For yōkai aficionados and Mizuki fans, there is a great deal of interest here, with Mizuki exploring one of his influences and sources, relating his interpretation of Yanagita’s Tōno Monogatari to his own career and life while exploring the terrain of their origin. More cynically, one could read this work as the Legends of Tōno being folded Disney princess-style into the Mizuki Pro brand, complete with special guest appearances by NonNonBa and Nezumi Otoko. I would not be surprised, however, if many readers find this book a little slight, a little dull; a minor collection of the kind of stories we expect Shigeru Mizuki to tell in a mundane, austere register. That said, as a literary adaptation, there is some stimulating intertextual play, and when the works are held up against one another, it is clear that Mizuki has added a great deal of drama to the original. 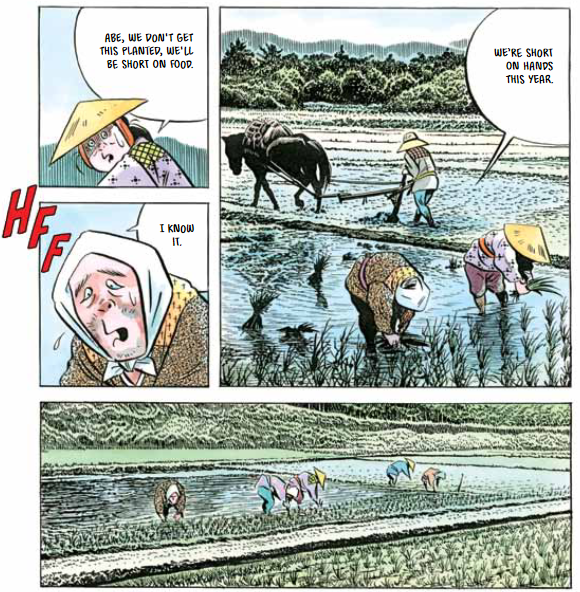 Yanagita’s stories are very brief -- the longest are only a couple paragraphs -- and the short chapters of Mizuki’s adaptation keep that brevity of narrative intact, although the decompressed length of serialized manga allows Mizuki a lot of space to expand their telling in his presentation. Davisson’s introduction highlights Mizuki’s incorporation of bathroom breaks into the narratives as “one of Mizuki’s personal touches,” but I think that touch is more than personal - it’s humanizing. The people of Tōno in Mizuki’s telling do not merely observe, but sweat, stumble, complain about hunger and thirst - the sort of embodied experiences that one might become aware of in yourself and others while hiking for several summer days across the same village. But Mizuki’s retelling has a flair for melodrama as well: pulp images of action, horror and shock bring these literary folktales to life, although their visual impact is tempered by the brevity at which the stories come to a close, Mizuki whisking their presence away like so many banished spirits. 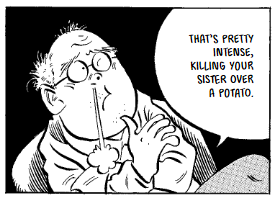 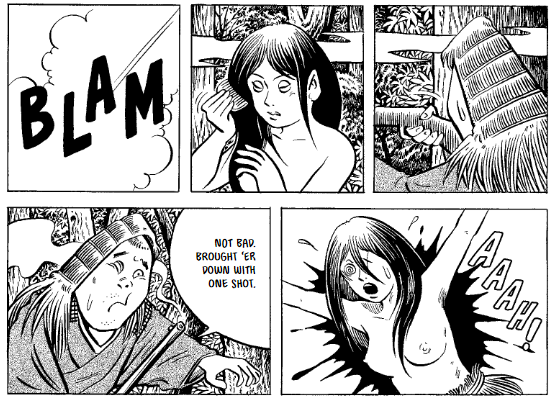 Not all of the stories selected for Mizuki’s adaptation concern violence against women, but many of them do. The very first story presented concerns a man who sees a nude woman combing her hair in the forest, and promptly shoots her. The man determines her to be a Yama Onna (the evidence being -- get this -- she’s tall) and sheers her hair as a trophy. Someone steals the Yama Onna’s hair while the man is sleeping, and Mizuki muses “That must be her husband. A Yama Otoko.” In the following story, more Yama Onna appear, among them a village leader’s daughter who was kidnapped by a spirit to bear children, which her spirit husband promptly eats. “You never know what’ll happen when spirits get their hands on you,” Mizuki coos as the chapter closes. Time and time again we return to accounts of traditional stories which reflect anxieties surrounding sexual violence and domestic abuse, particularly against women, given a new register of identification and immediacy by sheer dint of how Mizuki approaches comic book art. And yet, this reading seems to completely elude Mizuki, both as an author and a character within his story, content to musing on the strange ways of yōkai. I couldn’t help but recall that this grandfatherly voice advising us to be wary of spirits was the same who made such a casual and sexist admission to leering up a woman’s skirt. Perhaps Mizuki is able to narrate these stories so calmly not only because they are traditional, but because he is indifferent to the trauma which they so clearly represent. 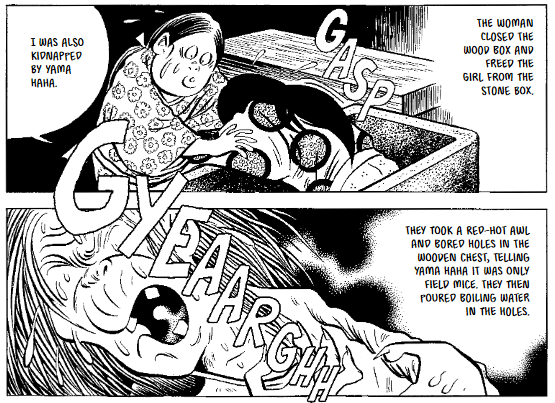 And yet, is Mizuki’s perspective (or lack thereof) all that this graphic novel contains, or can contain? After all, this is a studio project for a monthly magazine - what story did Mizuki’s assistants feel they were telling as they laid down inks to shade to add photoreal details to the landscapes of Tōno? This is not a work that the elder Mizuki “decided” to do, but an assignment to commemorate a work of literature that purports to compile traditional stories of a region. We may often end on Mizuki’s face, or a mention of “Ol’ Yanagita,” but these stories aren’t just Mizuki’s telling of them, or Yanagita’s collection; they are the stories retold by people who claimed and felt that they had really happened. In the penultimate chapter of Mizuki’s Tono, the last to retell a story from the original Tono Monogatari, a little girl and a young woman work together to outrun, outwit, and kill a monstrous elderly woman mountain spirit, a Yama Haha. “We can go home,” the woman says to the girl, and they do. Mizuki refrains from making an appearance, offers no words of wry flopsweated observation this time, but leaves us with an image: the two of them walking home, together, receding into the distance, gazing up from the tall grass at the dragonflies.

[1] A good article on Mizuki’s superheroes is here. Additionally, Ryan Holmberg gets into some of Mizuki’s American pulp inclinations at the beginning of an essay on depictions of the Japanese blood industry in postwar manga; Zack Davisson’s blog has some interesting side-by-side comparisons via a post from 2011 by Natsume Fusanosuke; and Mizuki’s daughter Naoko has recently shared some images of Mizuki’s personal collection of American comics. 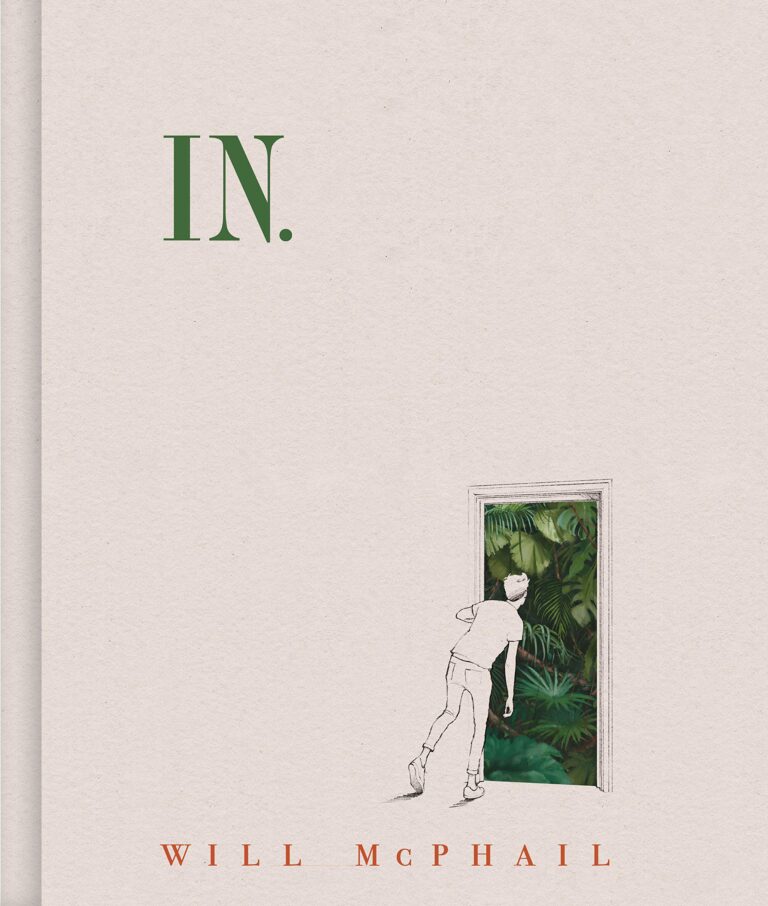 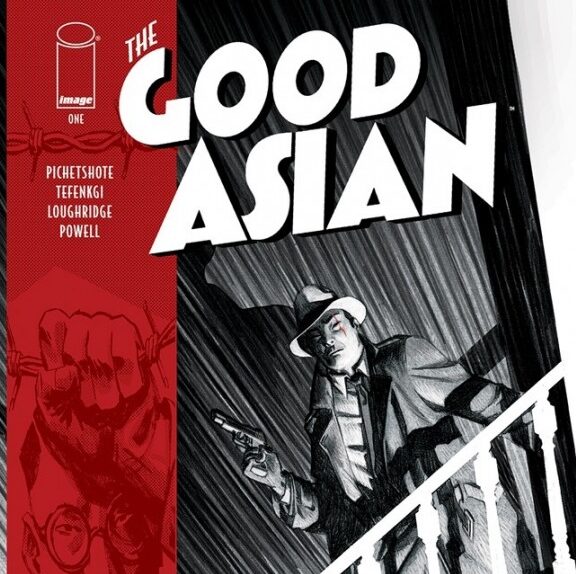