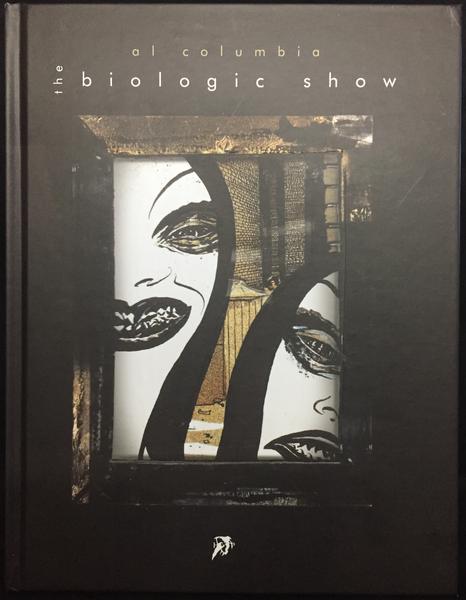 The new reprint of that singular work The Biologic Show arrives with its aura undiminished by the passage of twenty-six years since it first appeared. It also arrives accompanied by a faint smell of cordite. Backstage acrimony between Al Columbia and the publishers of this edition, Hollow Press, spilled out onto Twitter and Facebook shortly before publication, evolving from (presumably) some private misunderstanding into public name-calling. Columbia's complaint included the publishers "manipulating and drastically re-working much of the book...[claiming] to improve on Al's work," according to a Facebook commentator clearly located very close to the artist but who neglected to supply their name. Parsing the disagreement fully would be a job for the bomb squad, although even a casual bystander might ponder that the new edition, like all republishing efforts on paper before we even get to the issue of digital conversion, is already an exercise in manipulation and drastic re-working. Hollow Press presents The Biologic Show as a single collection of the two previous Fantagraphics volumes, parts of which had already appeared in the UK's Deadline anyway, now between hard black covers on an aromatic paper stock and with all the pages the same size, an incongruously sturdy box for the seething unsettled cartooning within. It also includes additional pages from Columbia's slightly older mini-comic 23 Skidoo, and others from the slightly-older-still strip Johnny 23 which then appeared in a 1995 issue of Taboo. Pulling together these other Columbia creations from different venues under the one umbrella is an act of curation and admiration, a snapshot of the artist's work of that era while also by any stretch an alteration to whatever that original artifact was that carried the name of The Biologic Show in the first place. This is clearly a different work. And also just as clearly not, since the added pages are no less singular than those of The Biologic Show itself, extravagantly affective cartooning serving to emphasize the already obvious facts: that Al Columbia produced these comics from a deep-seated point of origin somewhere within himself, and that should the critic care to carve a path into the undergrowth behind the art back towards the artist it quickly becomes a wander into a fog bank. Your relationship to The Biologic Show, in this edition just as much as in the original, is more or less cut off from any consideration of the unknowable Al Columbia as creator. There's just you and the drawings, reaching an accommodation in the intimacy of your own head while regarding each other warily. 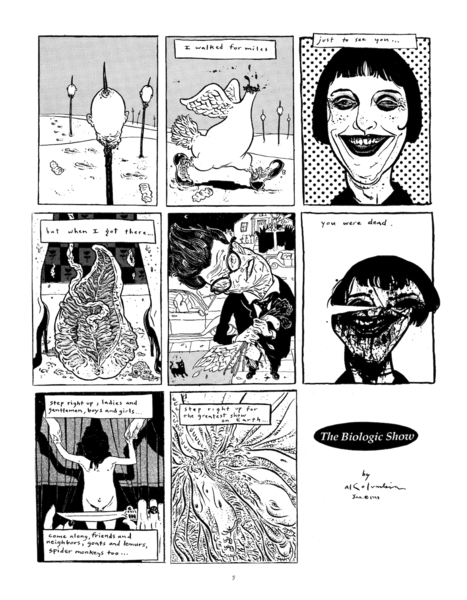 Back again comes The Biologic Show's cast of sufferers. Seymour Sunshine, the moon-faced man-child escaping from the ravenous maw of a hinge-jawed ogre to float free and possibly go nowhere. Mr. Lucy, a suburban white dope systematically stripped of all symbolic male attributes and then the biological ones as well in a self-inflicted afterlife of guilt and torment, ending up with a saintly halo driven into his head with a spike. Li'l Saint Anthony having his coprophiliac nervous breakdown in front of a sign saying Beware of God. Pim and Francie, sibling agents of chaos blithely running into multiple manifestations of danger and death. Arriving from the pages of 23 Skidoo, here's a very average man throwing coins into a wishing well and thinking of a vagina but not getting what he thought he wanted at all - a gag strip by any measure. And speaking of gags: Johnny 23, in five pages of relatively straightforward cause and effect, skips around an abyss of male delusion and the bleak inverted mirror-world of a sex abuser who escapes into a fantasy self-image as an adored Brylcreemed crooner. Any lingering impression that the 1990s Al Columbia was a blunt cartoonist simply dipping his pens in nightmare fuel should be punted away once and for all by this strip, in which the unnerving distortions of the drawings and the skittish typography are coolly calibrated to transmit very particular discomfiting understandings about the individual being depicted, alongside some very clear humor - clear and resonating at a Stygian frequency. 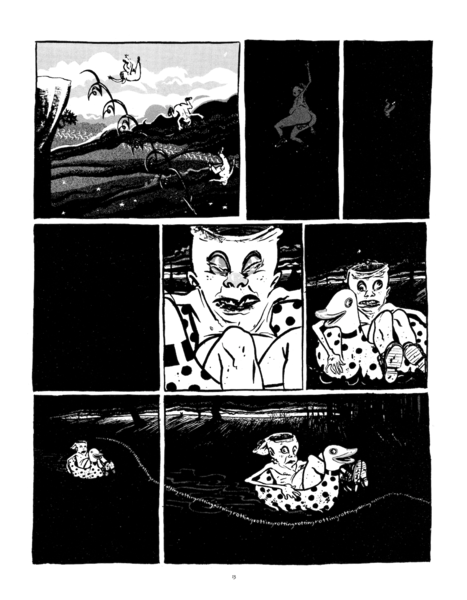 Like any art which earnestly taps into the dark stuff, The Biologic Show is hardly any one thing. It's a burlesque, that home turf of insult and scorn, and if it's messier and less focused than the things that Columbia went on to do later, it's also the Petri dish from which several new molecules emerged, some of them more elegantly formed. It's manifestly a work under the influence of Bill Sienkiewicz, one possible what-if destination of the Sienkiewicz style if it had turned away from illustration and toward introspection but maintained the intense static charge. It's a period piece from the 1990s high-water mark of cultural anxiety about psychosis and serial killers, delivered through the one mass medium that can always tell you more about the scary aspects of yourself than about those scary other people. In the rear-view mirror from 2021, it looks like a comic clued in to the end of the 20th Century as the conclusion of a century of death and also fairly sure that a century to top it might be along shortly. But it's mainly a comic prepared to look at unpleasantness intently enough that horror eventually acquires aspects of mirth or becomes it entirely, where a pen stroke describing the exact shape of a mouth can twist one into the other. If that's an uncomfortable perspective for the artistic mainstream, then the mainstream always needs an outsider artist lurking on the margins to whisper that option into its ear. 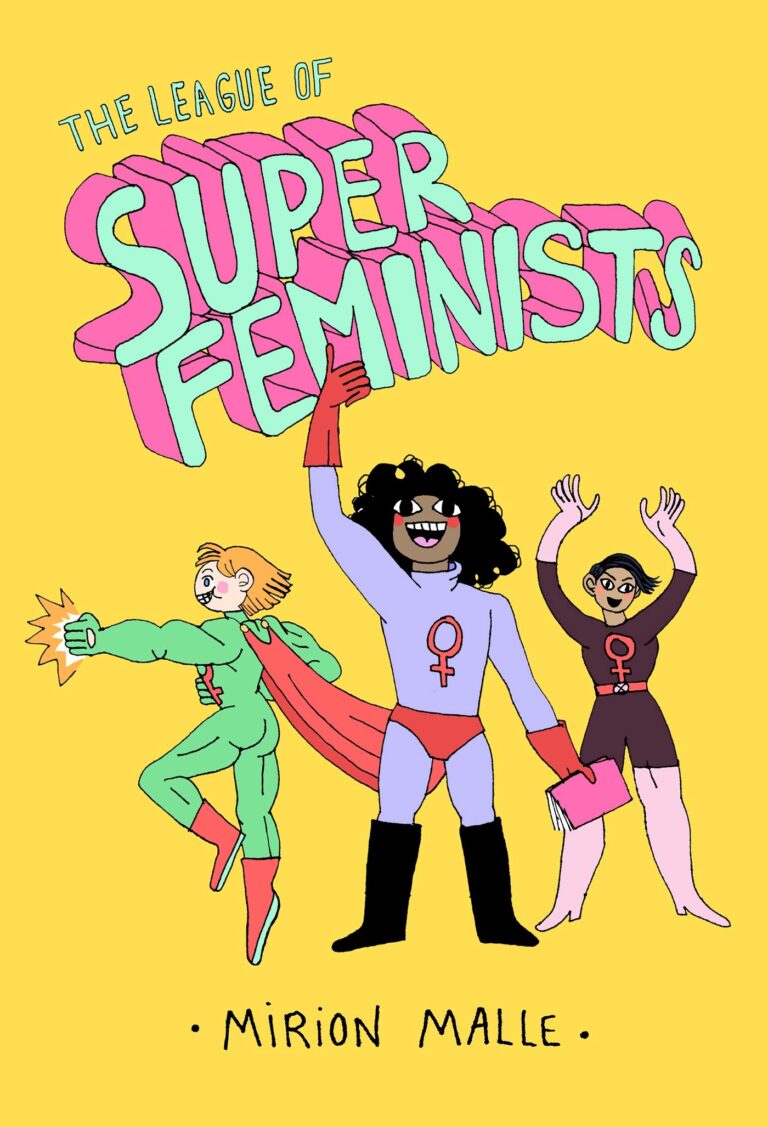