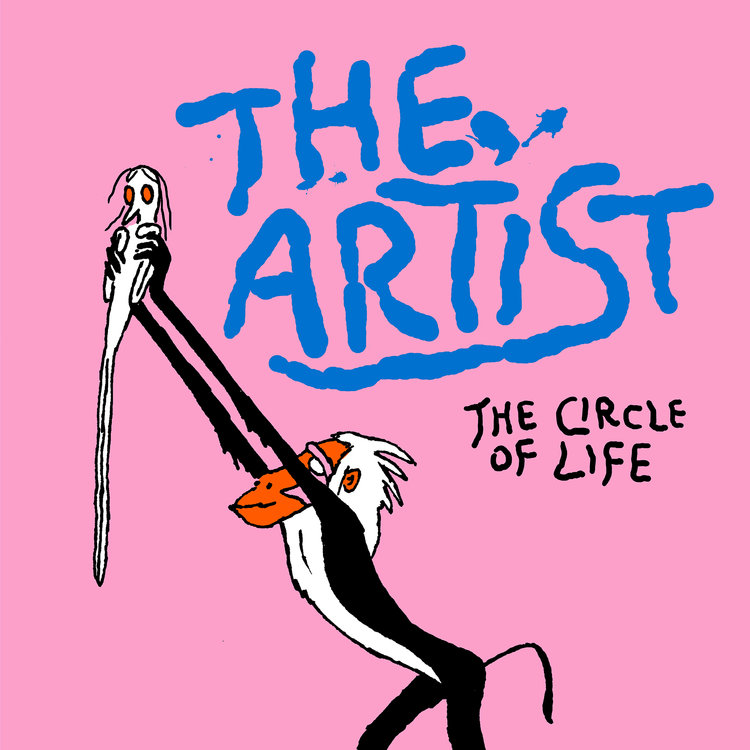 The Artist: Circle Of Life

Above a morose caption, “I always thought I was someone special,” three simple elements—an orange triangle, a black circle within a marginally larger white circle, and a yellow circle—float within the white void of a panel, evoking a minor excision of a Kandinsky or Malevich canvas. These discreet shapes coalesce in the following panel as a geometric abstraction of The Artist’s avian face, accompanied by a new caption that in resignation proclaims, “I realized I am not.” This is the anxiety, the paradox that flutters across the pages of Anne Haifisch’s new collection of Artist vignettes from Breakdown Press. The Artist: The Circle of Life represents a continuation of Haifisch’s 2016 collection The Artist, which was also first published serially by Vice, as well as something of a spiritual successor to her 2018 Von Spatz—a fictional account of Walt Disney, Tomi Ungerer, and Saul Steinberg’s time spent at the Von Spatz Rehabilitation Center following their respective physical and mental breakdowns.

Indeed, if there is single question underlining Haifisch’s sundry sketches of the artistic life, it is this: what do we do with the modernist figure of the tortured artist in a (post?)-postmodern age where he has become a bathetic stock character yet the anxieties and perceptions that originally produced him—status, productivity, success, rejection, judgement, originality—continue to loom so large? (I use “he” here deliberately: Haifisch consistently represents the figure as a man, from her own Artist to the trio in Von Spatz to the creators and creations, fictional and real, who stipple her stories.) Haifisch’s plumed, eponymous Artist suffers from a perpetual and almost terminal case of imposter syndrome. The specter of productivity haunts many of Haifisch’s pages, and so frequently we meet the Artist while he sleeps, lounges, procrastinates—the twin blades of judgement and rejection dangling dangerously above his nervous head.

Yet in her portrait of the artistic life, Haifisch also demonstrates a levity and playfulness that softens the sharper edges of her Artist’s angst-ridden self-doubt. In particular, The Circle of Life possesses a free-floating and zippy intertextuality, wherein pastiche and allusion abound: Donald Duck, Van Gough, The Lion King, Marc Chagall, Snoopy, Marina Abramović, Pepe the Frog. As Haifisch intermingles high and low, historic and contemporary, popular and elite, the supposedly neat columns and rows of artistic hierarchies and depth become blurred—a new scale is established that treats each element as equal participants in the polysemy of her Artist’s ontology. 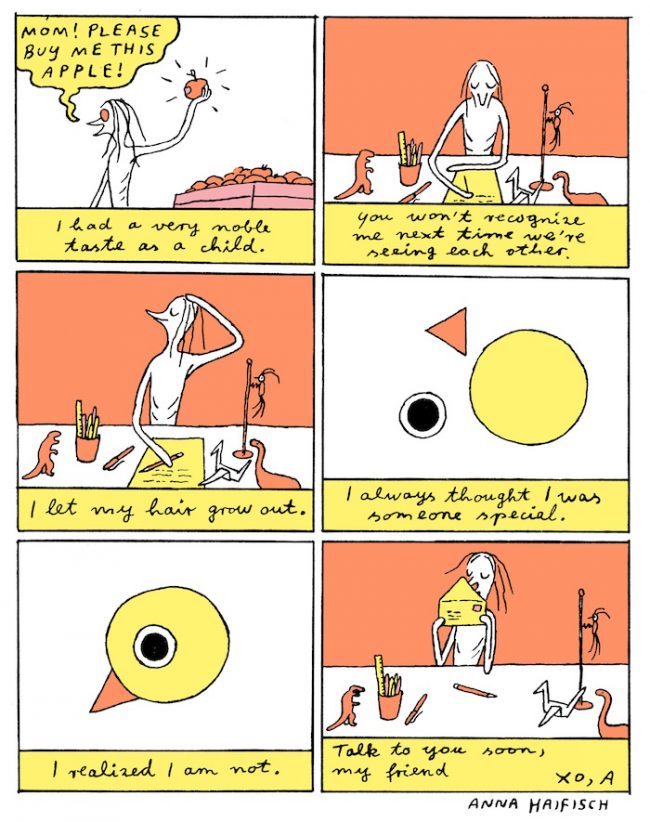 It is in this fluid territory that Haifisch excels. She is capable of effortlessly transitioning from a sprightly, tongue-in-cheek strip in which a bougie incarnation of her Artist prepares for Vienna gallery week by doing everything except create art—he luxuriates in a day that includes, among other things, eating “a mouth-watering detox kale smoothie” while lounging in his “Valentino bathrobe with salmon colored Saint Laurent slippers” and wondering “what to do with these leftover Chanel ribbons”—to more bitter flashes of profound recognition: the Artist experiencing a mental breakdown after comparing his own output to that of a profusely productive peer, lashing out violently at his own art as spasms rack his body, tears saturate his face, and he fluctuates between convulsive laughter and sobs. Two extreme sides of a satirical coin that nevertheless strikes a little too close to home.

Haifisch’s purposefully limited, habitually characteristic color palette is one of the most commented upon features of her art. Her distinctive mixing of two analogous, desaturated color schemes—yellow/orange and pink/purple/blue—results in a sorbet palette that doesn’t quite approach the softness of pastels yet is comforting in its tenderness. Nevertheless, the effect of these hues against a dominating white background is an intensity of white that is disconcerting in its relative brightness, establishing an uncomfortable balance that resonates with the anxieties at play in the work. This solid, block palette approach to coloring can be seen across a number of Breakdown Press’s comics, but is especially noticeable within the suffused palette of keystone contributor Joe Kessler. In both Haifisch and Kessler’s comics, hues rarely blend or bleed into one another; absolute color separations are maintained throughout. I’ve always found Haifisch’s predilection for the trifecta of yellow, orange, and white, well, eggy. This is appropriate, of course, for her avian protagonist, whose white feathers and yolky orange eyes recall a prenatal state, but the colors also suggest the embryonic occasion of artistic creation central to Haifisch’s explorations. 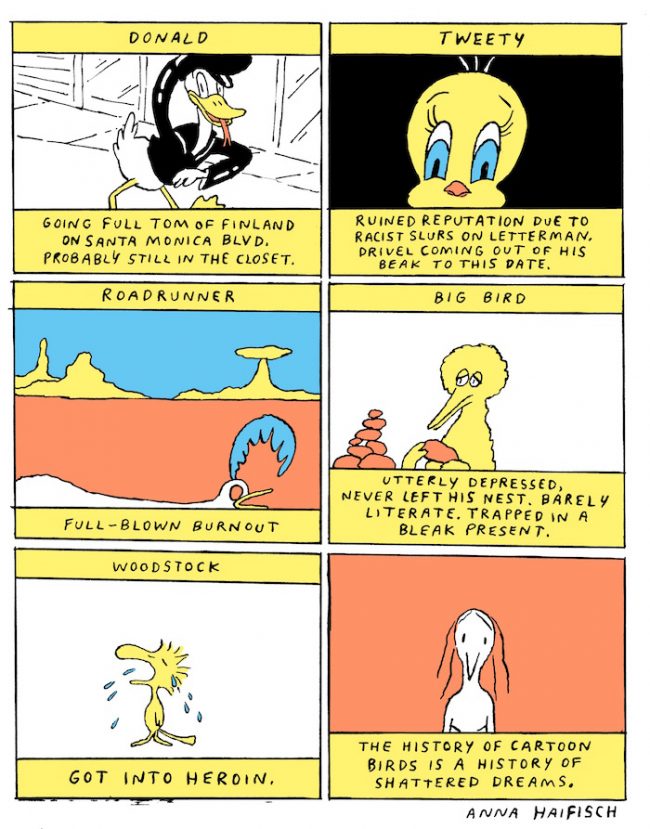 The Artist: The Circle of Life represents the crystallization of an artist entirely comfortable prodding at the more exposed and sensitive nerves of her profession. Given her scattered deployment of the Japanese form in The Circle of Life, it is tempting to compare Haifisch’s comics to strictly patterned haiku. Yet, as much as her narrative vignettes of the Artist might mimic this purposefully brief and evocative form of poetry, the episodes accord insight into specific, embodied artistic experience, rather than the ambiguity and infinite interpretability haiku impressionism. For Haifisch, while art is just as much about analyzing and understanding such impressions and expression, in The Artist: The Circle of Life it is the lives of those for whom craft is an everyday experience of struggle and reward that deserve just as much explication and understanding. 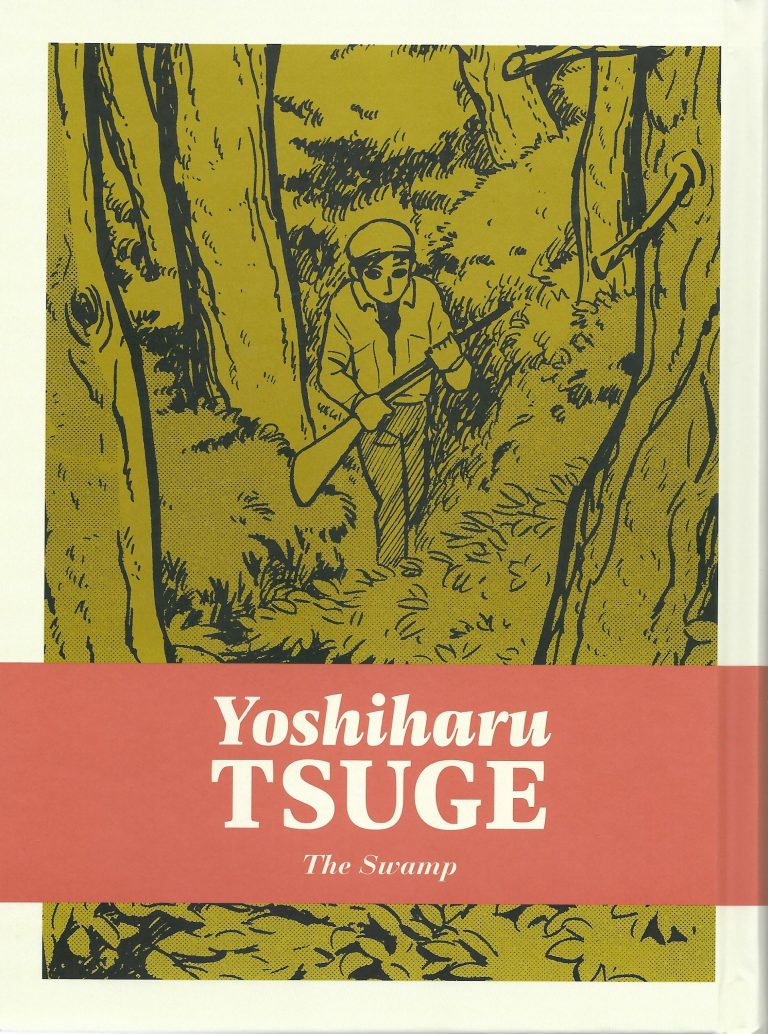 The Swamp (The Complete Mature Works of Yoshiharu Tsuge Volume 1) 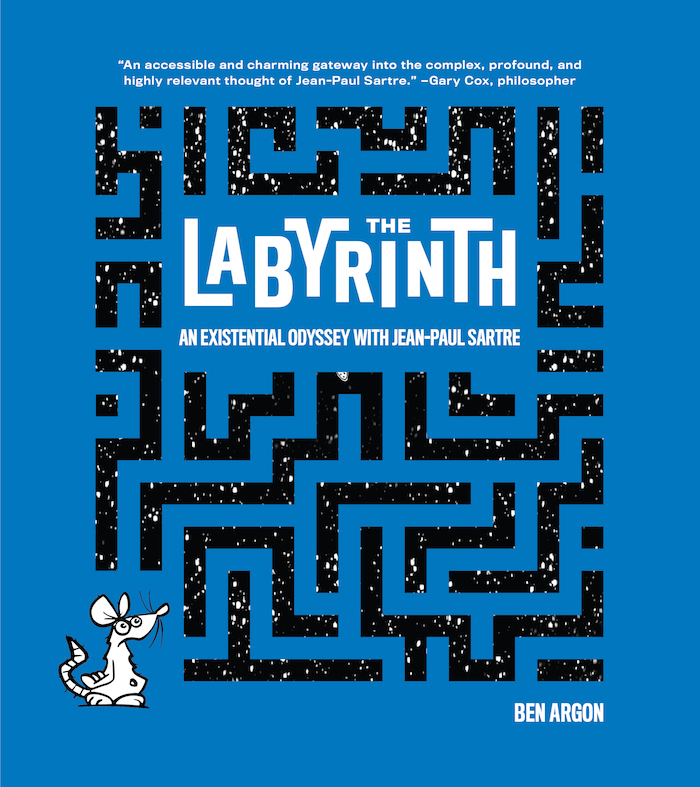