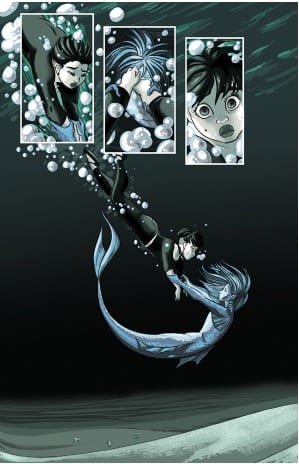 Comics content has always been shaped to fit the available space. When creators had a full glorious newspaper page to work with, Little Nemo created sweeping fantasy vistas. When artists only had four panels, they turned to gag setups. Social media and the ease of digital mash ups has encouraged the creation of one-panel do-it-yourself memes—the format shift creating a change in comics content so radical that most people don't even recognize them as comics. 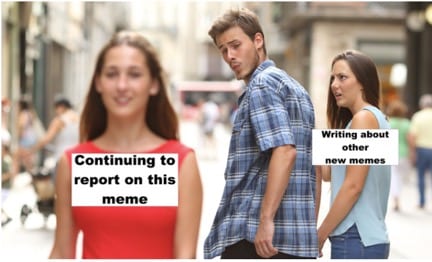 Jessi Sheron's The Sea in You doesn't look like a radical formal experiment at first glance. It's a gentle webcomic about a young student named Corinth who strikes up a friendship (and possibly more) with a mermaid. Sheron began the comic in 2015; she updates it every week or two. As of this writing there are over 60 episodes.

The Sea in You has been running, then, for around four years. Reading it all at once, it's difficult to believe how slowly the plot has developed over that time. Corinth is established as a somewhat lonely, insecure kid, whose boyfriend Seth is low-key manipulative, controlling, and insulting. When Corinth is cleaning trash from the beach alone one day, she's drawn into the waves by the siren sound of a mermaid, who almost eats her, then decides not to. Corinth comes back to the beach to try to see the mermaid again, and over a number of meetings the two flirt, exchange gifts, and teach each other about their different worlds.

And…that's it. That's as far as we've gotten. If there is some overarching adventure narrative, it has yet to be introduced. In fact, we don't even learn the mermaid's name until episode 48, from April 2018. (Mermaid names are it turns out unpronounceable high decibel shrieks, so the mermaid agrees to let Corinth call her Skylla.) 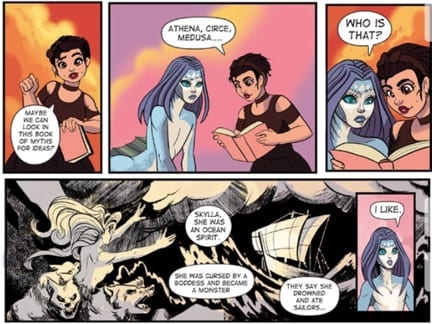 If the pleasures of The Sea in You were tied to plot or action or adventure, the fact that it takes three years for the characters to introduce themselves would be a problem. But the point of the comic is discovery, not conflict, and the slow accretion of action and detail gracefully compliments the slow accretion of wonder that is central to romance, and for that matter, to fantasy.

You can see the comic's willingness to take its time early on, in the full page sequence in which Corinth and Skylla first meet. Skylla has pulled Corinth into the ocean, so both characters are weightless and floating. The background is black except for bubbles rising towards the surface. Those bubbles are mirrored by three drifting panels showing Corinth in close up, before the page opens up to show Skylla waiting. Her flexible body is arced in a curve under Corinth, so the two of them together form a semicircle.

The page doesn't really show time passing so much as time standing still; the inset panels are impressionistic flashes of the same instant. The third close up on Corinth's face, eyes manga-wide, position her, with you, as the viewer, looking at a moment outside of sequence or narrative.

Sheron posted the next few pages relatively quickly, but still, the underwater meet-cute, which is supposed to take seconds in real time, is spread over days of updates. And the climax is again not any action, but a pause within a pause. Skylla moves to bite Corinth, but then gets distracted by her necklace. The action is derailed by a random bright, shiny thing. 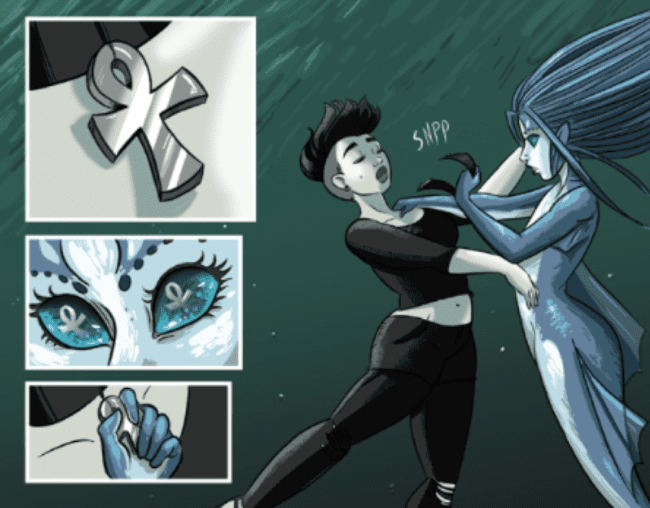 The Sea in You is, in fact, nothing but a long series of derailments to pursue the next shiny thing. Laura Mulvey famously noted that images of women in film tend to freeze the plot in fetishistic contemplation, as the male gaze takes its eye off the goal and rests on other things. The Sea in You is, as those close-up mermaid eyes indicate, more about a female gaze than a male one—and especially about women looking at other women and taking the time to float slowly to a halt to appreciate what they see.

That appreciation is as much anticipation as consummation. The Sea In You centers on a female friendship that has the potential for more, if the hugs and flirting are any indication. But that potential is slow to build; at this rate it'll be 2025 before Skylla and Corinth get to a first kiss. And if it happens, the story seems likely to stall out for months at least. The simple declaration "I like", back in 2017, froze the ocean where it stood, transforming narrative into abstract (more or less literal) splash page.

In the meantime, there's a lot of charged, shivery waiting as all the emotions dart and circle in shiny flashes down there below the surface. Corinth teaches Skylla what a book is; Corinth gives Skylla a hamburger; Skylla promises to come back the next day. There's not much in the way of suspense or punch lines; the point is just enjoying the company, and learning more about people you love.. So  Skylla flips away into the ocean at the end of one page…. 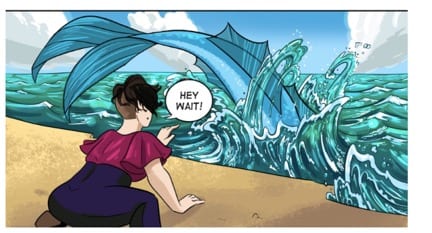 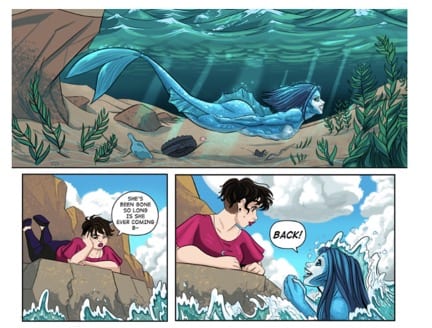 In this context, Sheron's out-of-narrative spot art is almost more true to the comic's purpose than the pages which advance the narrative, however slowly. I particularly love an out of time, out of sequence bonus art page of Baby Skylla, which shows the fetal mermaid with tail cuddled up in an egg. Falling in love is falling in love with a person's past as well as their present; you want to see the family photos to know what you missed, as well as what you have to look forward to. When Sheron throws in images like this, she's not stalling for time so much as reiterating that stalling for time is what we're there for. 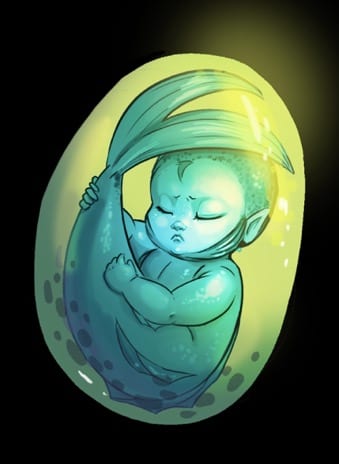 Sheron's readers aren't put off by the fact that the story unfolds slowly and takes detours. You read it page by page, or image by image, because you want to spend time with Sheron and her characters, just as Skylla and Cointh want to spend time with each other. Ocean waves don't get anywhere. You watch them because each one is worth watching, especially with a mermaid by your side. 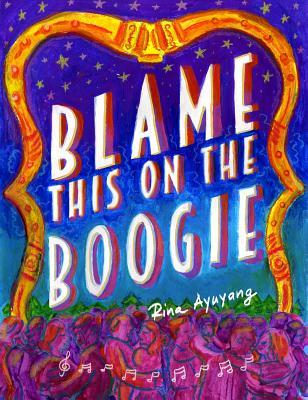 Blame This On the Boogie 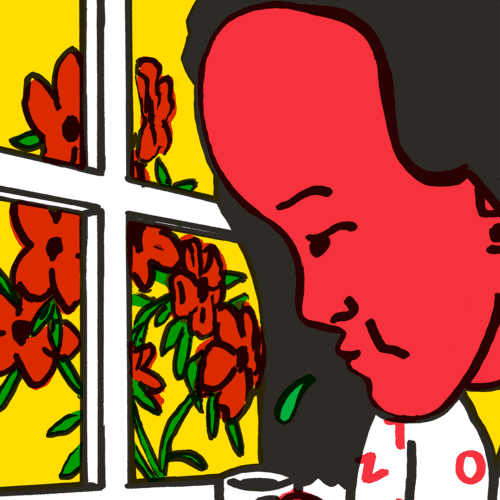