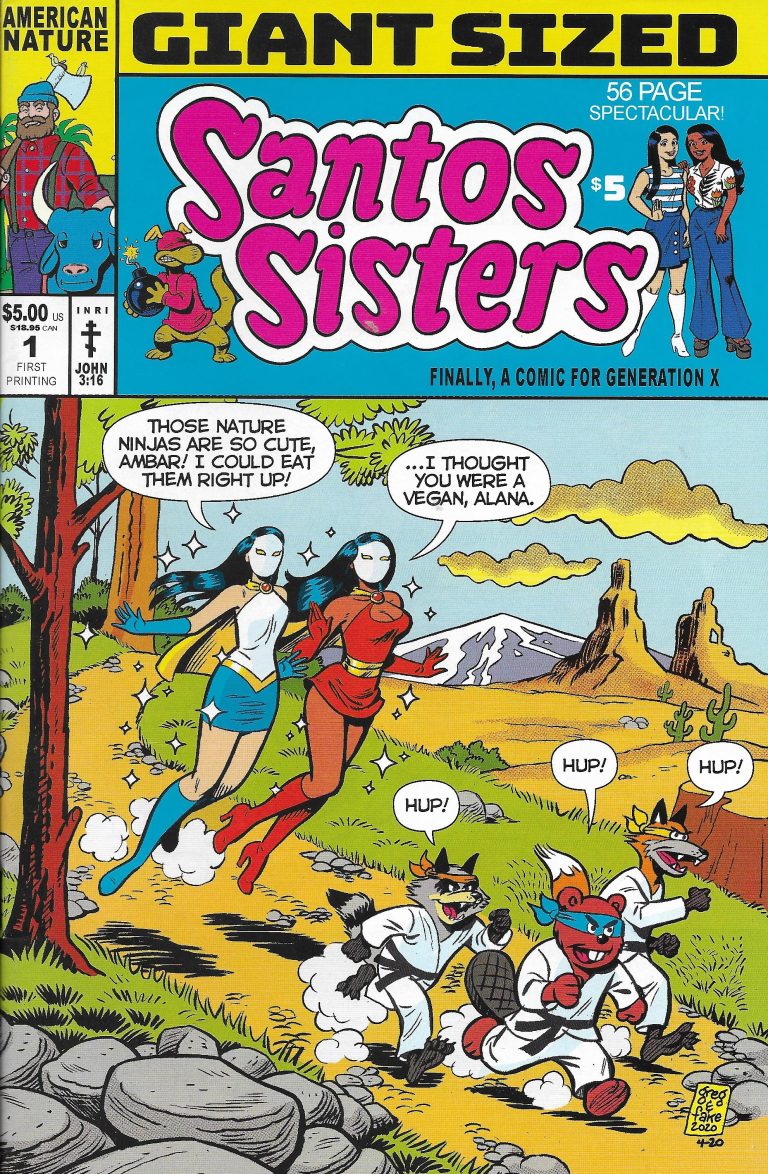 Santos Sisters #1 bills itself as “Finally, a comic for Generation X” on its cover, and that exasperated pseudo-serious-but-completely-joking tone carries throughout its 56 pages. It’s a delightful-looking newsprint comic, almost completely done in Dan DeCarlo cartoon stylings by creators Greg and Fake Petre, but with a violent superhero sheen and a knowing nod to the reader who has seen all of this before, but maybe not in this exact way - and not usually with this much playfulness.

The implied conceit of this self-published (but now distributed by Floating World) comic is that it’s a superhero comedy from the Archie stable, with garishly colored three- to eight-page stories such as “Santos Sisters in ‘Scope: Feel the Tingle’” and “The Santos Sisters in ‘Outta Gas, Kiss My Dolphin Ass’”. The Santos Sisters themselves, Ambar and Alana, get an origin on the inside front cover in what looks like a travel or shampoo ad pastiche, a single image with text that reads: “One day while combing the beach, the Santos Sisters discovered a pair of beautiful medallions... What happened next changed their lives, forever.” What happened next, apparently, is that they put on medallions imbued with the powers of a goddess, “Madame Sosostris”, and can transform at will into flying, gun-wielding, mask-wearing murder-heroes with hearts of, if not gold, than at least candy. They are not altruistic, but they lean toward goodness. Not that any of these details matter all that much - the premise is not a setup for explorations of heroism, but rather as an engine for delivering weirdness and comedy. 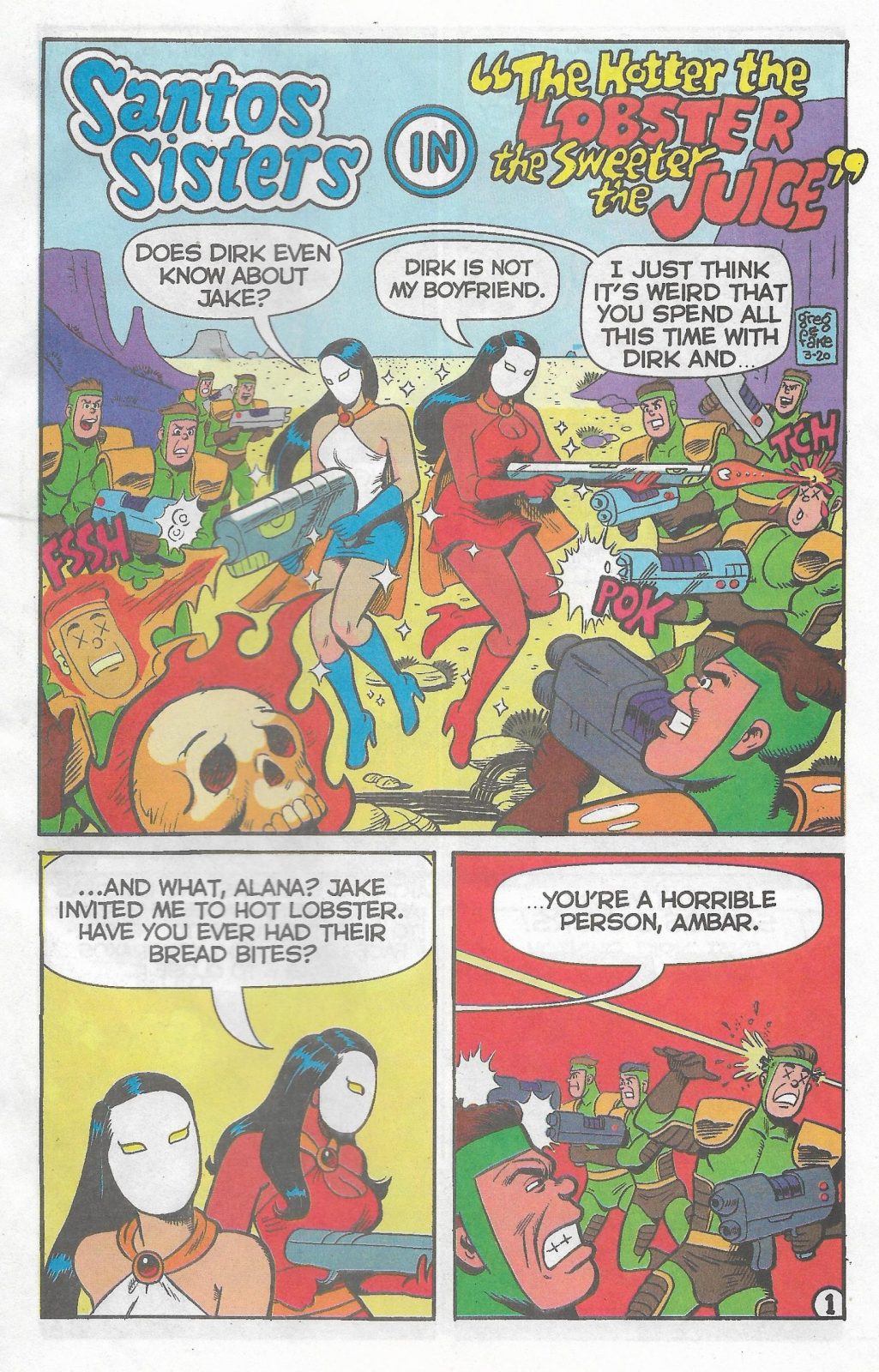 The opening page of the first story starts strong, with several juxtapositions that demonstrate the type of comedy Greg and Fake are interested in using: classic light teen romance cartooning; dialogue about dating and the “Hot Lobster” restaurant chain; and our title characters blasting villainous minions in the face or setting their skulls on fire with their weapons. Is Deadpool popular because those Joe Kelly-and-beyond comics employ similar juxtapositions along with a heaping pile of irreverence? Maybe, but I don’t much enjoy reading most Deadpool comics; I find their humor tiresome. I like Santos Sisters a whole lot more, and it’s likely because it feels more organic, like Greg and Fake are experimenting and playing and discovering what makes them laugh as they write and draw these stories (most of which are dated 2019). It helps that all the stories are so short that there’s barely even a punchline before we find “The End” slapped on the bottom of the final panel. The brevity of these comics are absolutely part of their charm. 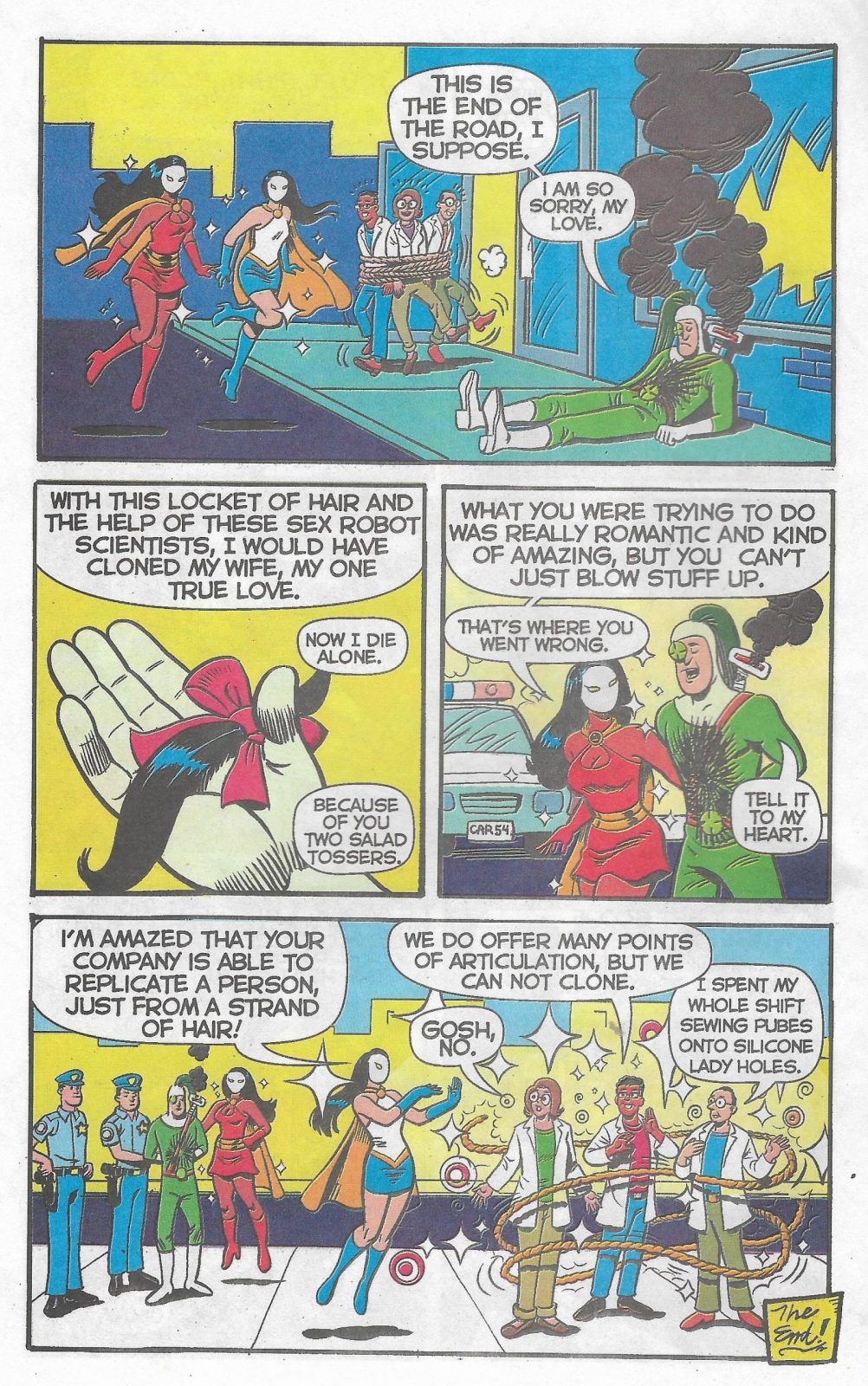 Structurally, each story is similar, with the Santos Sisters usually thrust into the middle of a bizarre situation (either in the opening panel or by page two) while bickering about relationship issues; then there are a series of visual gags or ironic comments, and the story ends with a literal or metaphorical wink to the reader. The supporting cast and antagonists are either archetypes or allusions from literature, cinema, or comics. Jim Lee- and Rob Liefeld-like characters appear, toting guns and wearing shoulder pads - there’s a Domino pastiche and a literal cosplay of Psylocke. But Madame Sosostris, divine matron of the Santos Sisters, takes her name from the charlatan fortune-teller in T. S. Eliot’s high-modernist poem The Waste Land. Cervantes’s Don Quixote makes a featured appearance as a stranger in a strange land, speaking with mailboxes and avoiding skate punks before making an innocently lewd comment at the local diner. Another story cracks a Robocop joke via an image mimicking the style of Howard the Duck artist Frank Brunner, and then there are the repeated appearances of the “Boozy Beez”, a cartoon-within-the-comic starring deranged amorous bee characters drawn in a sideways style like an alt-Nicktoons variant on Otto Messmer’s Felix the Cat. 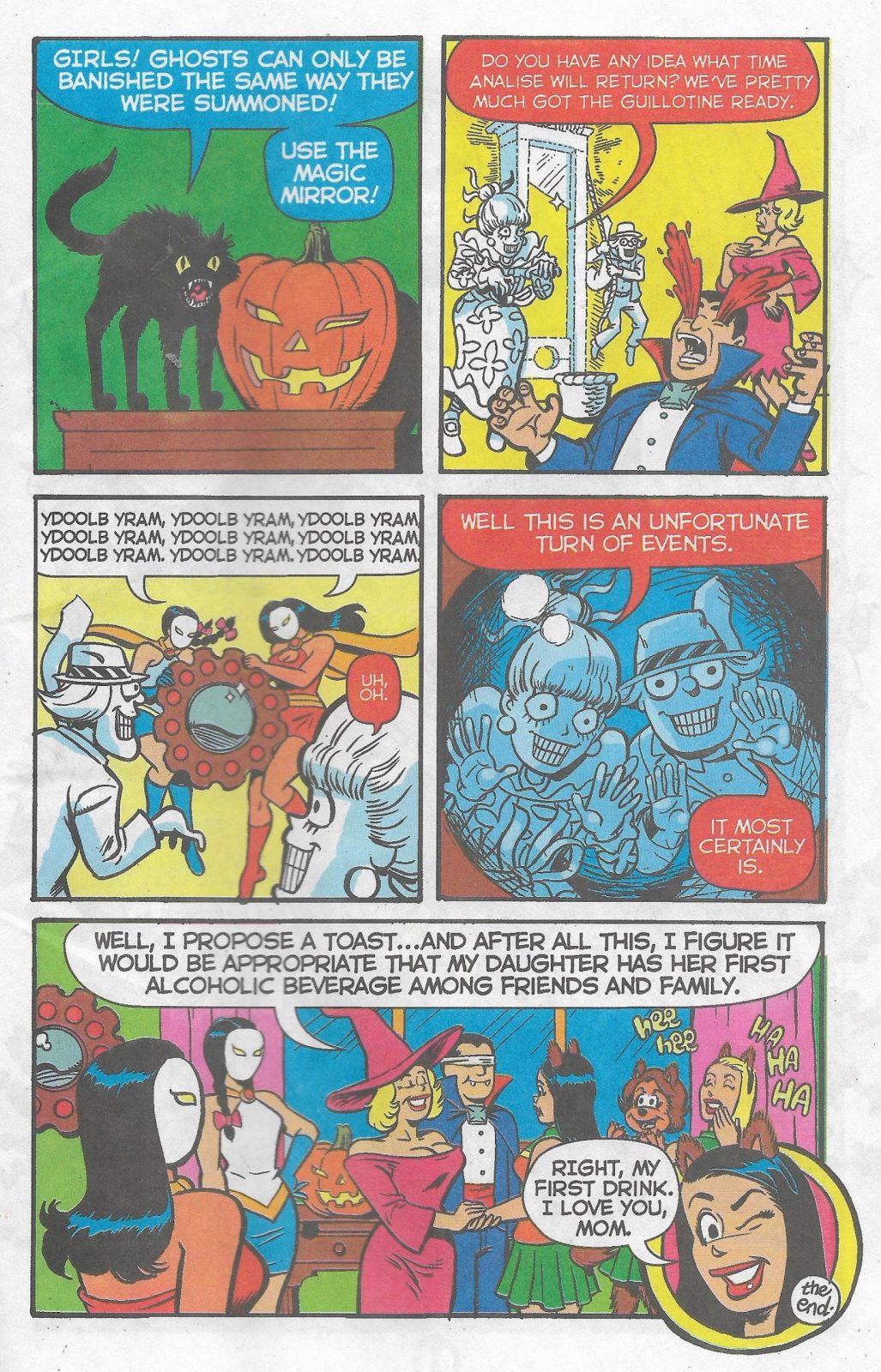 That’s not an exhaustive list, but it certainly can seem exhausting to consider so many allusions. Yet, it’s not exhausting as a comic. The maximalism of Greg and Fake, where they under-explain and over-introduce new characters and new jokes and new references, makes a surprising contrast to the relatively minimalistic Archie style they mimic, and it’s in that unexpected fission where the comedy works best. Each individual joke, each knowing wink or allusion, each individual story–though they look nice–don’t deserve extraordinary attention on their own. None of these three- to eight-pagers would feature in a Best American Comics anthology. But as a whole, the accumulation of details and comedic elements and relentlessness work to make this a highly entertaining comic. I loved this first issue, and now that it appears Greg and Fake have worked out a deal with Floating World to produce more Santos Sisters, I am interested to see if they can sustain these absurd heights. 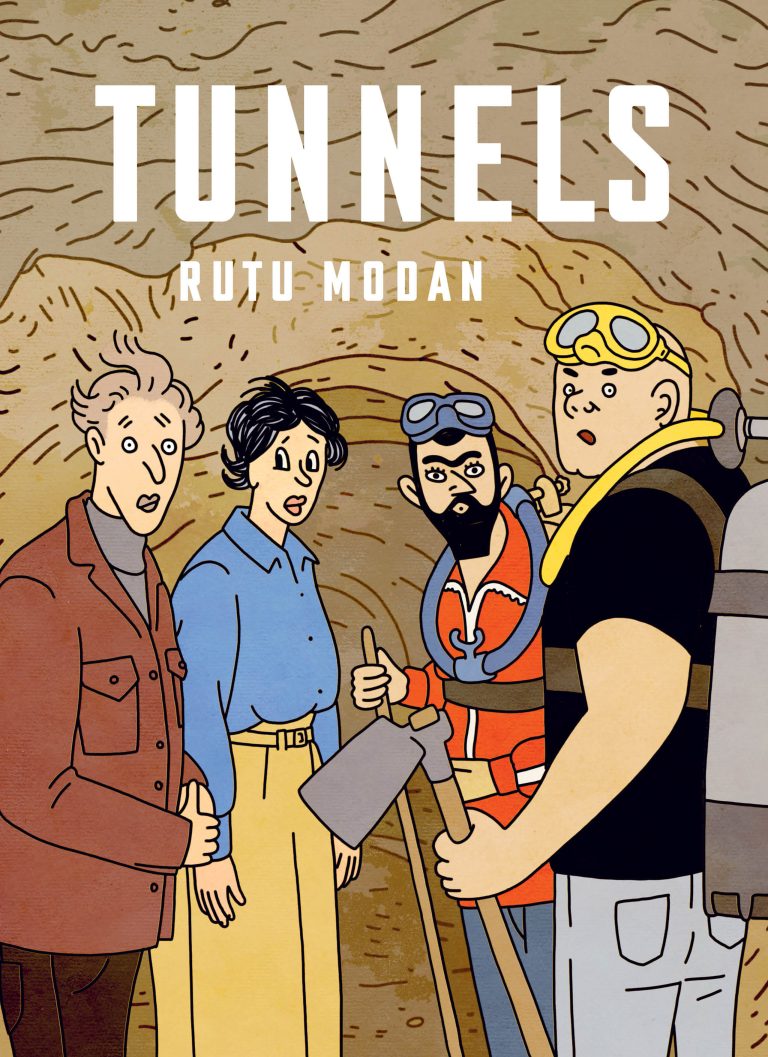