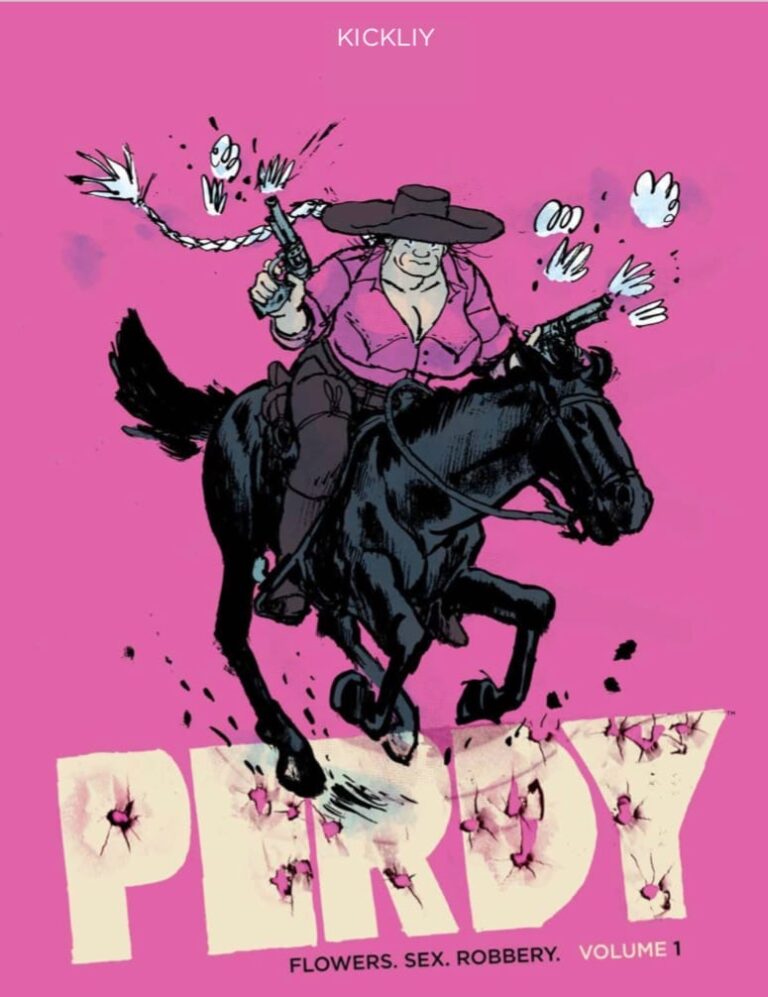 I was surprised at first to learn that Image Comics was getting into the Eurocomics translation business, but upon further reflection it seems a logical enough endpoint to a line drawn more or less straight from the 2012 reimagining of Prophet--originally a very American style action comic from Image founder and devout Californian Rob Liefeld-- into a more intricate and elegant Metal Hurlant-inspired science fiction serial by Brandon Graham and Simon Roy. Sales figures being as opaque as they are in the world of comics, I don't know how well the revamped Prophet did financially, but it was critically acclaimed and generated enough heat that Liefeld was being invited to pitch a Prophet movie around Hollywood a few years later. Image now appears to be trying to make European comics art a more integral part of their publishing identity -- a recent promotional article on their website touts an Image-published "European Art Invasion," and while anyone not in Image's marketing department might crinkle their nose at the subtitle, "Channeling New Aesthetics Across the Atlantic," to say nothing of the article's clear implication that Image is on the cutting edge of integrating the legacy of Moebius et al. into the fabric of American comics, it's nevertheless a net positive for Image to be providing a new outlet for both original work and translations from abroad.

Perdy, by Kickliy, is their first full bande dessinée album translation, released simultaneously with the French edition (put out by Dargaud in France), and it seems like the perfect kind of book for Image. It's a rock solid piece of serial entertainment -- it's funny, it's violent, and it comes through with a reason for you to come back for the next installment. It's a Western comic about Perdy, a notorious outlaw who is practically superhuman in her tremendous strength and equally tremendous bosoms. She likes to fight, she likes to fuck, and she does not suffer fools at all. The book opens with her being released from prison after 15 years, and follows as she gears up and heads out to settle scores and cause new mayhem. If this all sounds like a collection of cliches, that's because on one level it is, but very intentionally.  Perdy is one of those works where the execution is everything, and the fun comes from watching a talented cartoonist perform within a familiar milieu, both breaking up genre expectations and finding clever new ways to fulfill them.

The character of Perdy herself is Kickliy's biggest genre-tweak.  Her massive breasts are not attached to a standard-issue "bad girl" body, but rather to a middle-aged woman with a thick frame, long white hair, lines on her face, and missing teeth. Nevertheless, Perdy's animal magnetism is irresistible to most men in the comic -- as she's being released from jail, prisoners and guards alike weep as she walks away -- which opens the story up to a kind of aggressively bawdy humor that is the book's real claim to distinction. And while the double-entendres grow to feel somewhat forced and tiresome by the end of the book, Kickliy's drawings of men reduced to quivering lustful buffoons never stops being funny. 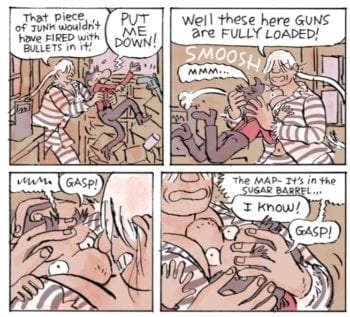 Kickliy's drawing is the other real mark of difference here. While Image has a deep enough catalog that there are certainly some exceptions, for the most part they specialize in publishing genre entertainment, produced with greater and lesser degrees of craft and imagination, and with art styles revolving at varying distances around the kind of semi-to-hyper-realism that American genre comics have been produced in since half-past Neal Adams. Kickliy's art is more readily recognizable as what the rest of the world outside American comic book culture would call "cartooning," his drawing rooted in the robust and playful Franco-Belgian tradition. Someone with a greater level of expertise could surely come up with a more precise comparison, but I couldn't help but be reminded of Lucky Luke, the long-running and much beloved "cartoony Western" series created by the Belgian cartoonist Morris in 1946, and continued after his death in 2001 by the French cartoonist Achdé. Perdy even issues from Dargaud, the French publisher that handled Lucky Luke during the 1970s and '80s (which, from my understanding, is not the "Golden Age" of the strip per se, but is around the time it began to be translated regularly into English editions and briefly became a Hanna-Barbera cartoon, so, you know, those are the only years that really matter.) It isn't even that Lucky Luke and Perdy look all that much alike, but that they share an approach to caricature, motion, and clarity. There is an energy to the movement that makes the violence and action more physically impactful, while a rough cartoony exaggeration keeps it all ultimately lighthearted. American comics that attempt that alchemy are rare -- Jason Shiga's Demon comes to mind, as well as parts of Jeff Smith's Bone. (Reaching back further, Carl Barks and Floyd Gottfredson come to mind.) This is not to say that Perdy operates on the level of these works, but it plays some of the same riffs, and very well. 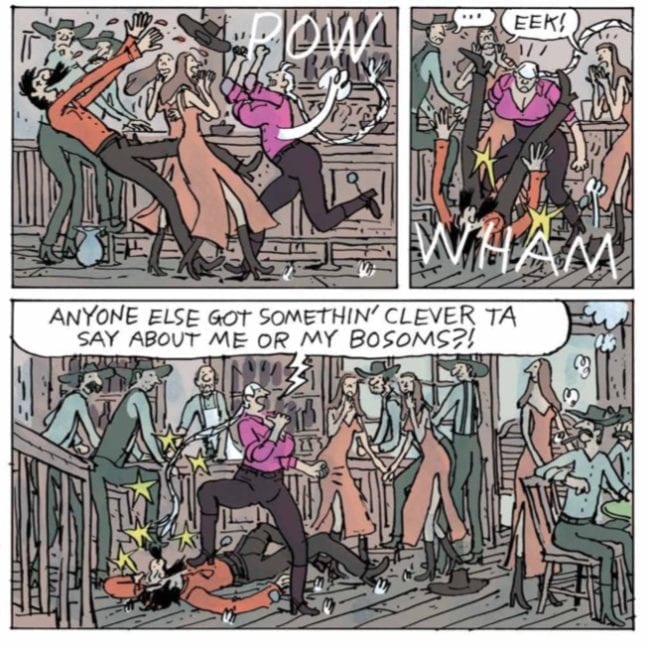 It would be interesting if Perdy ends up precipitating further album translations from Image, though there's no evidence as yet that this will happen. There's every chance that this translation arose from the specific circumstances of the artist. Kickliy is the pen name of a Minnesotan artist who moved to Paris and renamed himself while recovering from a bad accident. For all I know (and I didn't ask anyone) Perdy is born of particular ties to the American comics scene that Kickliy maintains. There is no translator credited on the book, and it would make sense if the artist localized the book for America himself (the cost-saving would fit Image's business model, too). But Image is currently invested in promoting their European artists, and there is a lot of untranslated material out there that a Fantagraphics or Drawn and Quarterly might not be interested in, but which would fit right in with the best of Image. I'm looking forward to more of Perdy, and I hope that when she returns, she brings some friends. 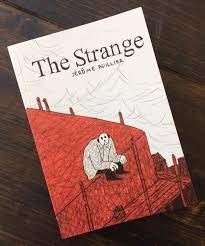 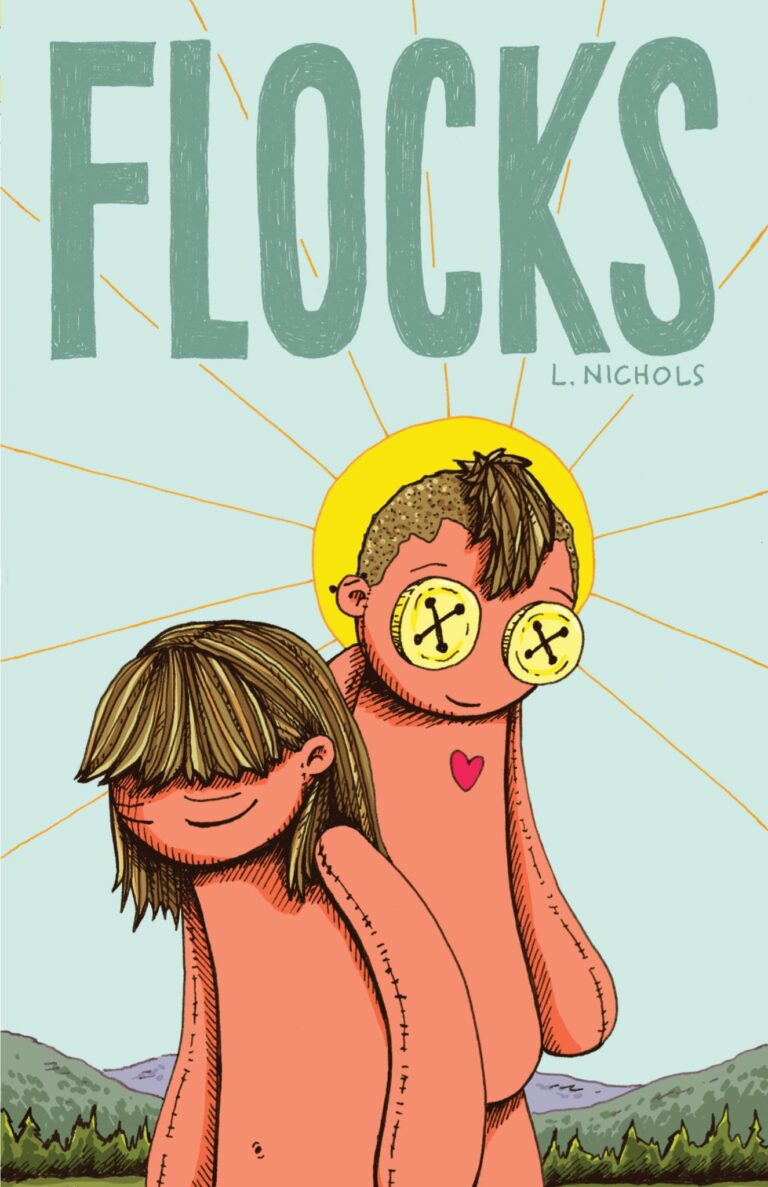