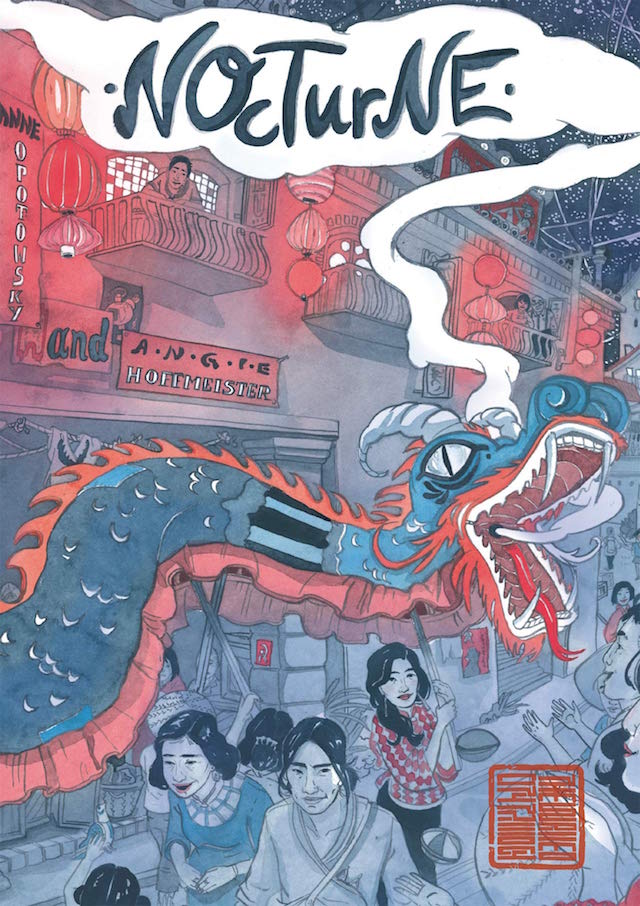 Confusion can serve a variety of aesthetic purposes. In cyberpunk, disorientation, dislocation, and neologisms propel the reader into a future of indescribable alienation. High modernist stream-of-consciousness captures the strangeness of someone else's head, and/or one's own. Noire opacity is about the bleak confusion of a world without moral guideposts.

Anne Opotowsky and Angie Hoffmeister's Nocturne: The Walled City Trilogy (Book Two) from Top Shelf is sprawling, intricate, and resolutely difficult to follow. Unfortunately, the book has no great reason for its fogginess, and a number of bad ones. As a result, while it has many virtues, it is ultimately a frustrating and tedious read.

Nocturne, the second part of an epic begun in His Dream Skyland, is mostly set in the 1930s in Hong Kong, in and around the Walled City on the Kowloon peninsula. The Walled City was a quasi-legal, crowded enclave of twisting streets and crowded rooms, outside the reach of most authorities. The British persecuted people sporadically, without providing any services or security. Through this tightly packed miasma, Opotowsky and Hoffmeister follow a seemingly endless array of characters; Benjamin, an adopted child and bondage enthusiast seeking his original father; Xi, a crippled acrobat; Mrs. Lu, a fortune teller with an imprisoned husband who is being courted by a crime boss.

The central story, to the extent there is one, follows Mrs. Lu's son Song, who works in the dead letter office at the post office. Despite the resistance of his superior, Song is determined to deliver the lost letters, especially those addressed to a Mr. Bao who appears to live, or have once lived, in the Walled City. Song discovers that the letters are connected to a plot to kidnap and sell children; his effort to deliver the messages becomes a quest to find the children and return them to their families.

The large cast would be a challenge to keep track of in any case, but Opotowsky provides few signposts to help you through the story. Her narration mostly consists of deliberately gnomic text blocks that contribute to the fog rather than piercing it. "So. Please, kindly choose. Is it early on in the march of time? Or is it quite late?" one typically unhelpful passage reads. Hoffmeister's art is evocative, but not always clarifying. Many of the characters, especially the women, are hard to distinguish from one another visually, making the numerous plot lines blur and tangle even more.

The meandering intricacy of the story in part is meant to reflect the meandering intricacy of the Walled City itself, which defies interpretation by postal worker and reader alike. Song's dead letter puzzle is also the reader's interpretive puzzle; both must make their way through a city with few road signs. Song spends ten years in the dead letter office, then within the space of a few months is promoted, demoted back to dead letters, and promoted again. His progress, or lack thereof, is indicative of the impenetrability of the British bureaucracy, and of the reader's experience of the comic, which wanders back and forth, moving two steps back for every step forward. 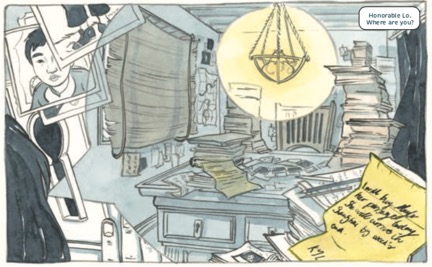 A little of this deliberate narrative befuddlement goes a long way, though, and Opotowsky and Hoffmeister stretch it out over more than 450 pages. Worse, the vagueness of the storytelling seems in part linked to Orientalist stereotypes about Eastern inscrutability. Opotowsky's Walled City is stocked with fortune tellers, sex workers, acrobats, gangsters—all staples of Western portrayals of the East. Opotowsky has spent most of her career in Hollywood, and press descriptions of the development of The Walled City trilogy emphasize its fantastic exoticism, "The longtime screenwriter was at dinner in Pasadena with her artist friend Aya Morton, who began describing a collection of photographs documenting an ungoverned, crowded settlement within Hong Kong’s Kowloon City. As she spoke, Opotowsky’s imagination soared." The fact that it soared up into a misty cloudbank isn't surprising, but is a tedious reminder that Westerners often project their own lack of knowledge onto others, as if its the life of the observed, rather than the vision of the observer, which is blurry.

Another reason that creators opt for confusion is because it creates an aura of profundity. This is the strategy of program fiction, in which slow pacing, a lack of event, and ambiguous endings are used to signal a highbrow thoughtfulness distinct from genre pleasures—or alternately to excuse those genre pleasures when they come. A character who does little but simper and die as a way of illustrating how serious the villains are might seem like a gratuitous pulp cliché, especially if she's killed just as she's about to go to the authorities. But if you slow the narrative down sufficiently so that the relatively simple plot arc takes a few hundred pages to develop, it reads as part of the deep rich tapestry of life…and death. 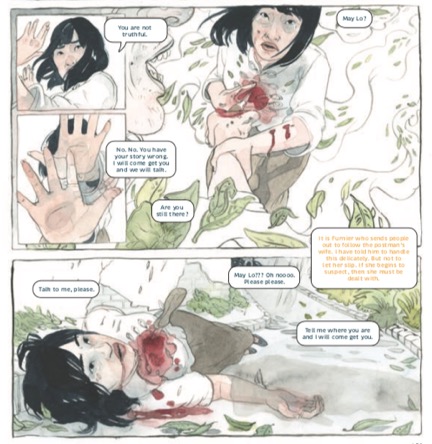 To be fair, that death scene is in fact executed with some visual élan; Hoffmeister signals danger by having the victim raise her hands in two inset panels, and then opens up to an image of leaves blowing around the stricken, bloody form, as if the wind is the assailant, rushing the dead woman towards another world. Opotowsky's writing has its moments, too, as when the sex worker next door reveals to Mrs. Lu with matter-of-fact carnality that her son has been coming to her off and on for some years. "He is very accomplished and he was not fully engaged. I often have wondered what he would be like if his heart were in it…" Mrs. Lu looks suitably non-plussed.

Moments like this are welcome, but not frequent enough. Nocturne demands close attention and a lot of patience. But unfortunately, it offers little in return for reader's efforts but familiar narratives, familiar exoticism, and familiar pretensions. The Walled City does seem like an interesting place, but Opotowsky is not the right tour guide. 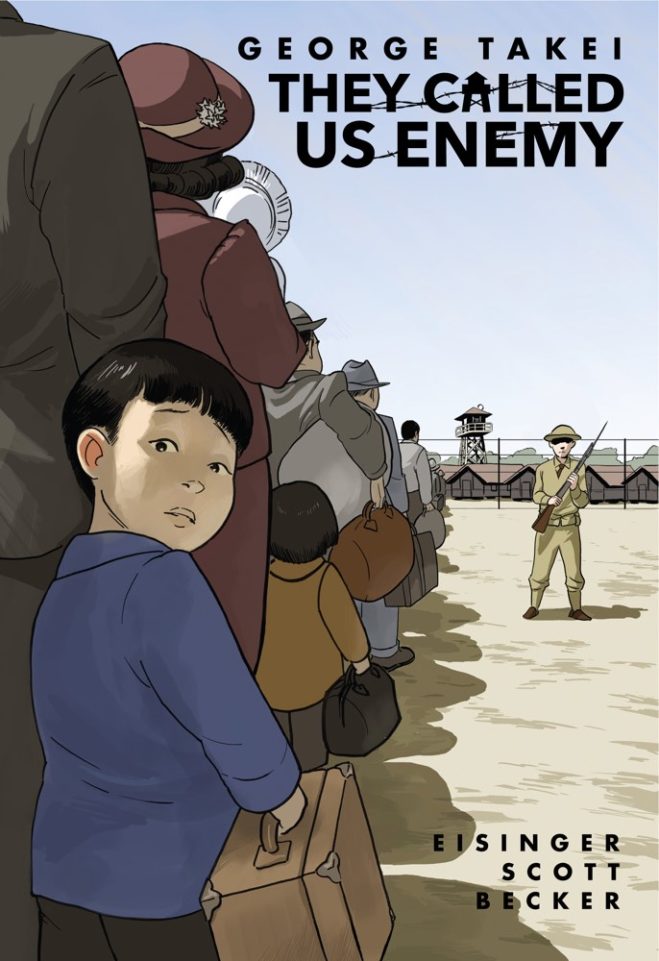 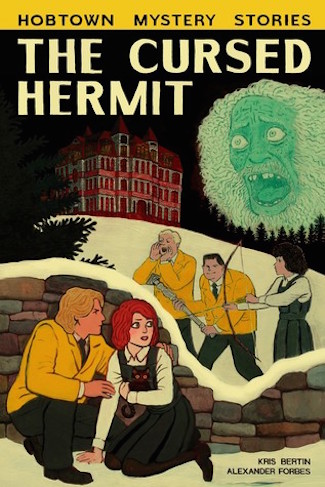