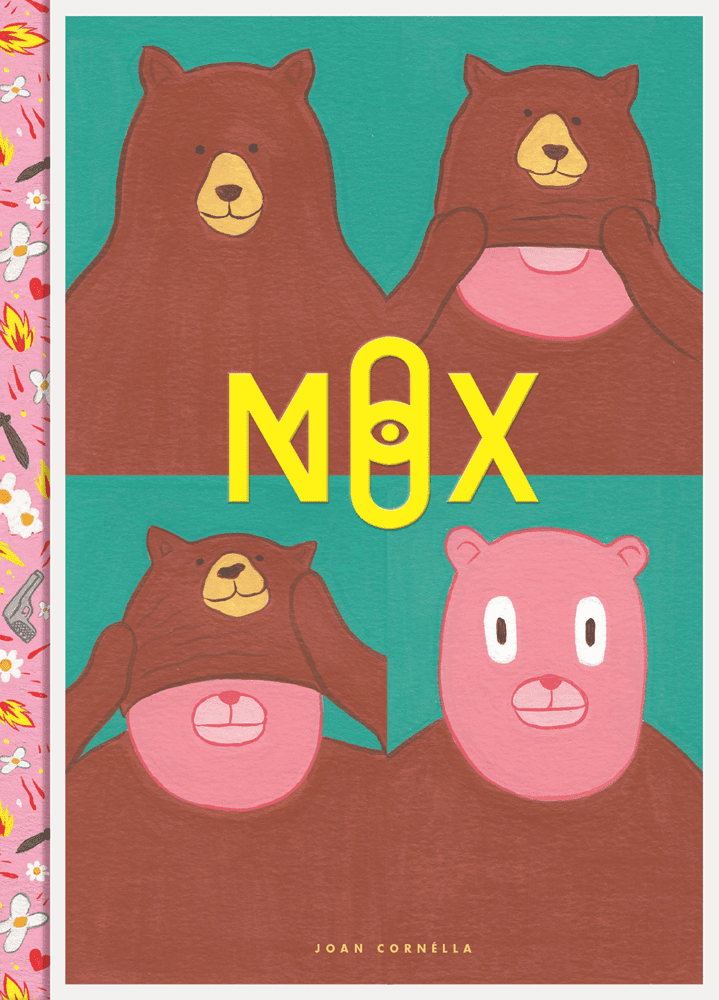 What makes the work of gross-out absurdist Joan Cornella so effective is his use of the lingering, unsettling image within a fairly rigid, predictable page layout. Sure, his depiction of often grisly violence and/or weird sex acts is funny on its own, but it's usually beside the point. It's almost a red herring for what's really disturbing in a comic. For instance, consider the following strip: 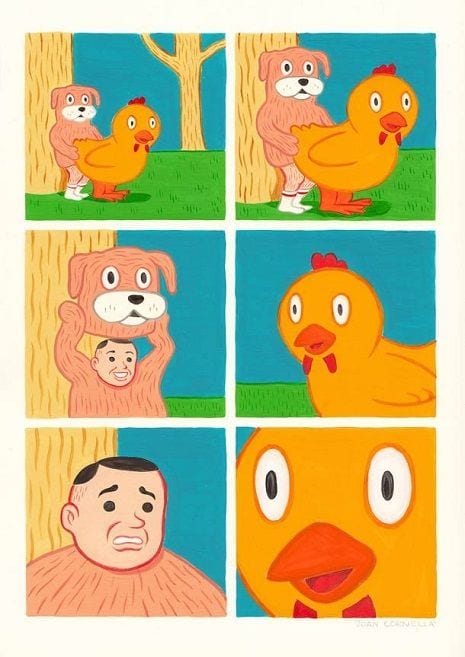 The way Cornella establishes, advances, and escalates the ultimate punchline is masterful. In the first panel, he gives us the transgressive image of what first appears to be a dog having sex with a chicken, immediately taking aback the reader. The second panel's close-up gives us a little more information, making it clear that the dog is actually a man in a dog suit. When he triumphantly takes off the head of the costume in panel three, he looks enormously pleased with himself that he's pulled off such a prank. We then see an adoring look on the eyes of the chicken in panel four and the man being disturbed by this in panel five. Panel six repeats the zoom technique of panel two, this time giving us an extreme close-up of the chicken's face (so extreme we can't see its whole head) with an utterly rapturous, adoring look. By shoving that image in the reader's face, Cornella makes us feel the same discomfort as the man. And of course, Cornella's punchline takes us in a different direction than the beginning of the strip might suggest.

He also uses the actual plastic qualities of his line and drawing style as fodder for gags, as the cover image (below) indicates. 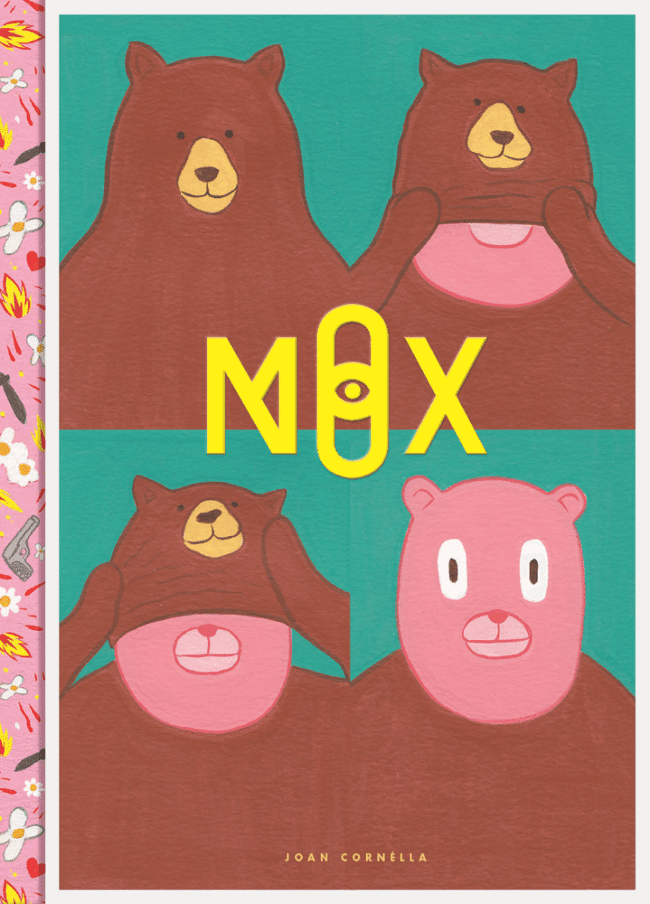 Cornella, a Catalonian cartoonist, creates his jokes on the foundation of the humor of paradox and misdirection. Shock and absurdism are part of his toolkit but are means to an end rather than the end itself. The cover is funny entirely because the reader is being misdirected. The promo material for the book bills him as a cross between Michael Kupperman and Johnny Ryan, but the cartoonists whose work his most closely resembles are John Kerschbaum and Brecht Vandenbroucke. Like the latter, Cornella's work on the surface is almost painfully bright and cheery. The colors are rich and appropriately cartoony. There's a sort of blank cheer on the faces of his characters, as though they're all lobotomized and rendered insensate to the world's cruelties. Unlike Vandenbroucke, there are no protagonists causing all of the trouble, as danger can come from anywhere. Like Vandenbrocke's and many of Kerschbaum's, Cornella's cartoons are entirely silent, making clarity a must in each panel as well as in panel-to-panel transitions. Small details are key. The actual drawings in Cornella's cartoons usually aren't funny (like Kerschbaum), relying instead on context and lulling the reader into relaxing their guard to create the punchline. Consider this next strip: 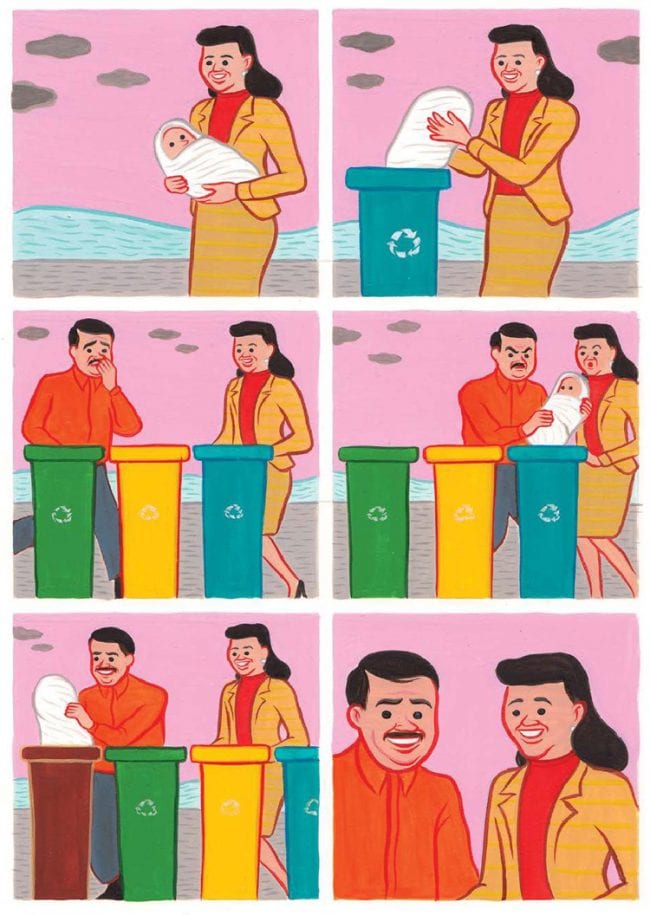 The punchline here is telegraphed a bit more than the first strip and it relies on shock value for the ultimate punchline, though once again the final panel's close-up forces the reader to share in the couple reveling after the man has thrown away a baby in the proper receptacle. The woman's almost painful grin in five out of the six panels is given a powerful visual counter by the man, who expresses shock in panel three, anger in panel, four and then finally the same kind of dumb ecstasy the woman is experiencing in panel five. The problem with the gag is that the insertion of the different waste bins is simply too much of a giveaway of the eventual punchline, even though Cornella tries his best to redirect the reader's emotional reaction with the middle two panels. It's still funny, but not as elegant as the first strip. Consider another strip: 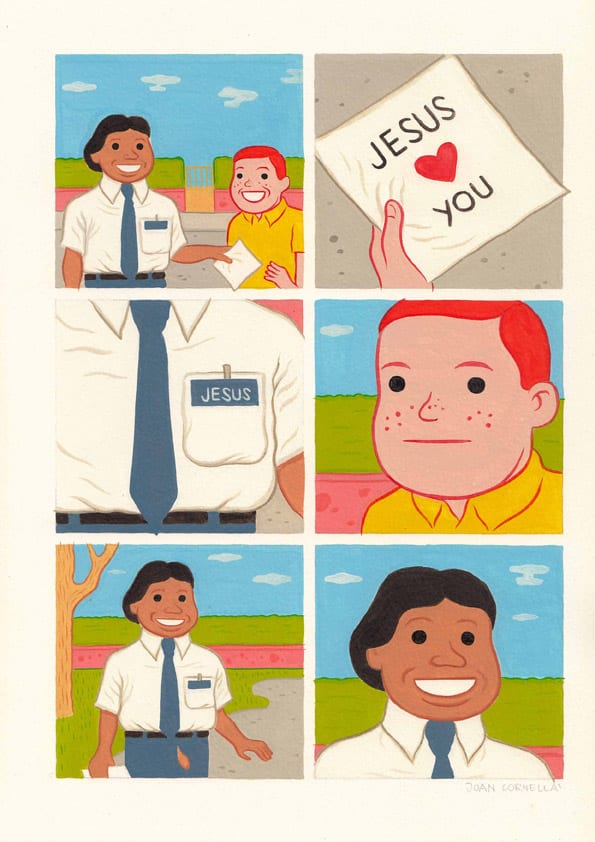 The first two panels are quite innocent and familiar: an evangelical Christian handing a pamphlet that says "Jesus Loves You" to a grinning young boy. Panel three reveals that the man's name is "Jesus," the bemused expression on the kid's face in panel four and the reveal in panel five that the man's penis is hanging out (while he continues to display the same stupid grin on his face) again combine to make shock an effective punchline, this time without giving away the final gag. Much as in the first strip examined in this review, it's the final panel's close-up of the man grinning even wider that's the most unnerving thing in the whole story.

There are times when Cornella only establishes the punchline in the final panel, which usually serves to explain the action of the previous panels. Consider one last strip: 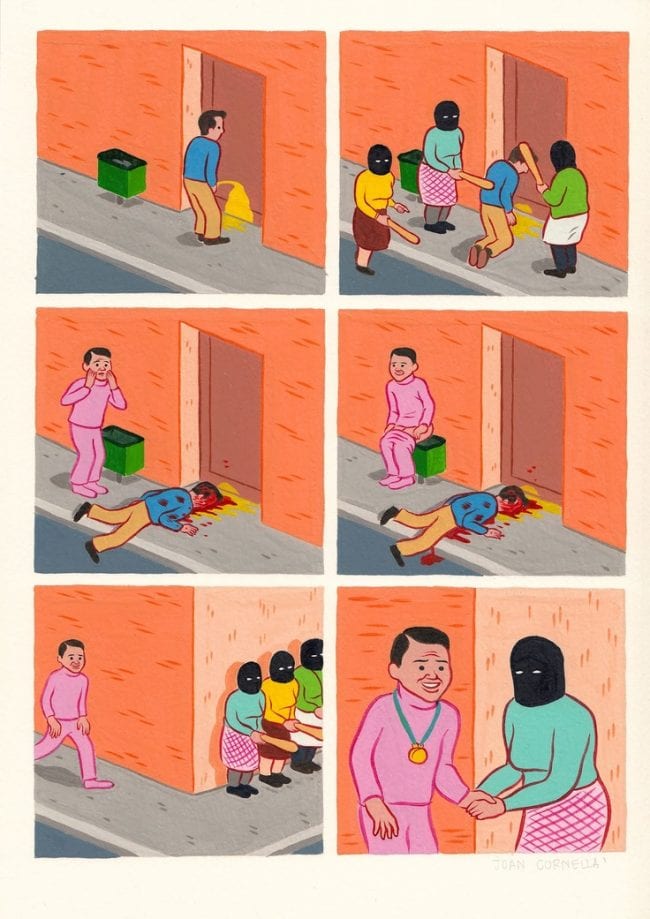 There's a certain absurdity in the initial action: a group of what seem to be masked housewives beat a man to death for urinating inside a doorway. Here, the blood, violence, and urine are all shock-tactics designed to keep the reader off-guard. The next three panels, with the passerby reacting in horror, defecating in a green box attached to the building and, then about to meet the group of women when he goes around the corner, would seem to indicate that he's going to meet a similar fate. Instead, the medal he gets in the final panel shows that he has passed a test by the group of women, who for some reason were monitoring how people relieved themselves of bodily waste in that particular part of town. Once again, it's misdirection that has an absurdist logic of its own. Indeed, Cornella's disinterest in formal variations (these are almost all six-panel strips) shows that for all of his violent silliness, it's how he uses and works within the standard methods of laying out a page and structuring a joke that ultimately makes him able to create so many different and hilarious variations on a theme. 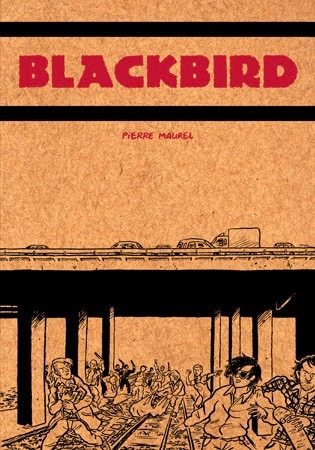 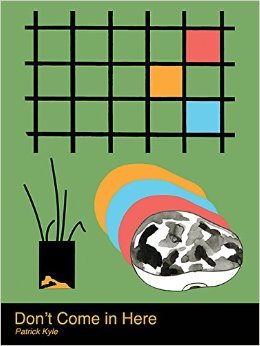