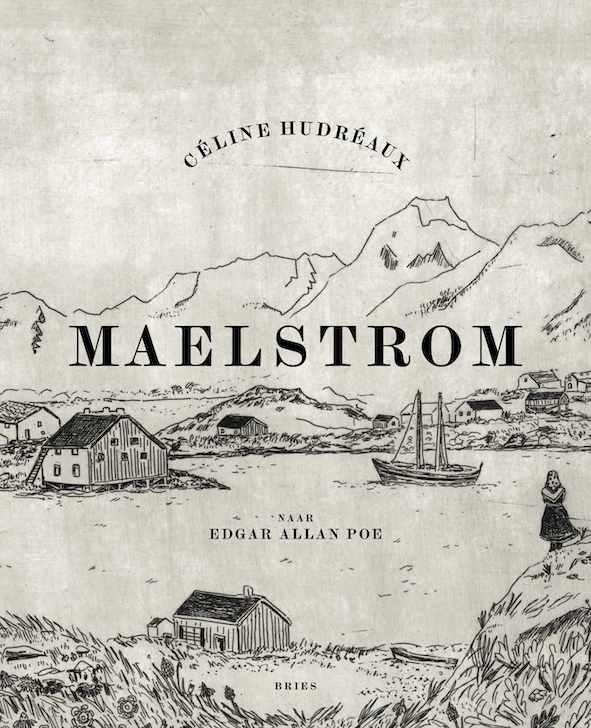 Etching is a printmaking process where lines are scratched with a needle and acid onto a metal plate, which then holds the ink to make prints. Céline Hudréaux works in etchings, and the Belgian publisher Bries makes books collecting reproductions of them. A useful point of comparison may be Frédéric Coché’s collected books of etchings (generally published by Fremok, but, with The Hero’s Life And Death Triumphant, a collaboration between Fremok and Bries): books that read as more abstract in their relationship to narrative than comics generally are, to the point they may feel closer to art books only adjacent to comics. This is partly because Coché’s approach is so fine-lined and delicate. Hudréaux recasts the act of etching as something aggressive enough to appeal to a cartoonist. Her lines look more scratched out than most examples of the art. Lines wobble, each with the uniform weight of what you get from a ballpoint pen. Short on spotted blacks, we get thickets of hatching that don’t quite capture the sheen of light off a fish’s scales, but continually bend light in askew perspectives. It’s a seasick, waterlogged, wind-bitten world we find in her new book Maelstrom.

Maelstrom adapts the Edgar Allan Poe short story “A Descent into the Maelstrom”, exchanging Poe’s structure, where a survivor of disaster narrates what happened to him years later, for a series of wordless etchings where the wind is visualized like scratches on film grain. Poe’s story is about a sailor who gets caught in a historic hurricane and is cast into a gigantic whirlpool. Within Hudréaux’s book, the pages depicting these whirlpools are not built up to narratively so much as they are presented like another section in a catalog of phenomena. What is a plot point in Poe’s story is rendered in Hudréaux’s plotless-seeming book merely as a point, touched on but not particularly emphasized, delineated for its visual interest the same way a mother and child or flowers in a vase are depicted. A few moments of terror closely correspond to scenes Poe’s prose describes: a close-up of an eye, a glance of a broken watch. Mostly we see the Norwegian fishing village that constitutes the background setting of Poe’s tale. Mountains and ships are discussed, so we get several pages of landscape drawings and images of boats. The depiction of women cutting and canning fish, or otherwise working side by side participating in factory labor involving byproducts of oil from whaling, is background detail Poe elides that takes up a substantial amount of Hudréaux’s pagecount. There’s no dialogue, so the women in fisheries are just as quiet among themselves as are the mountains, occasionally reduced to wisps of drawing, the images faded as memories. 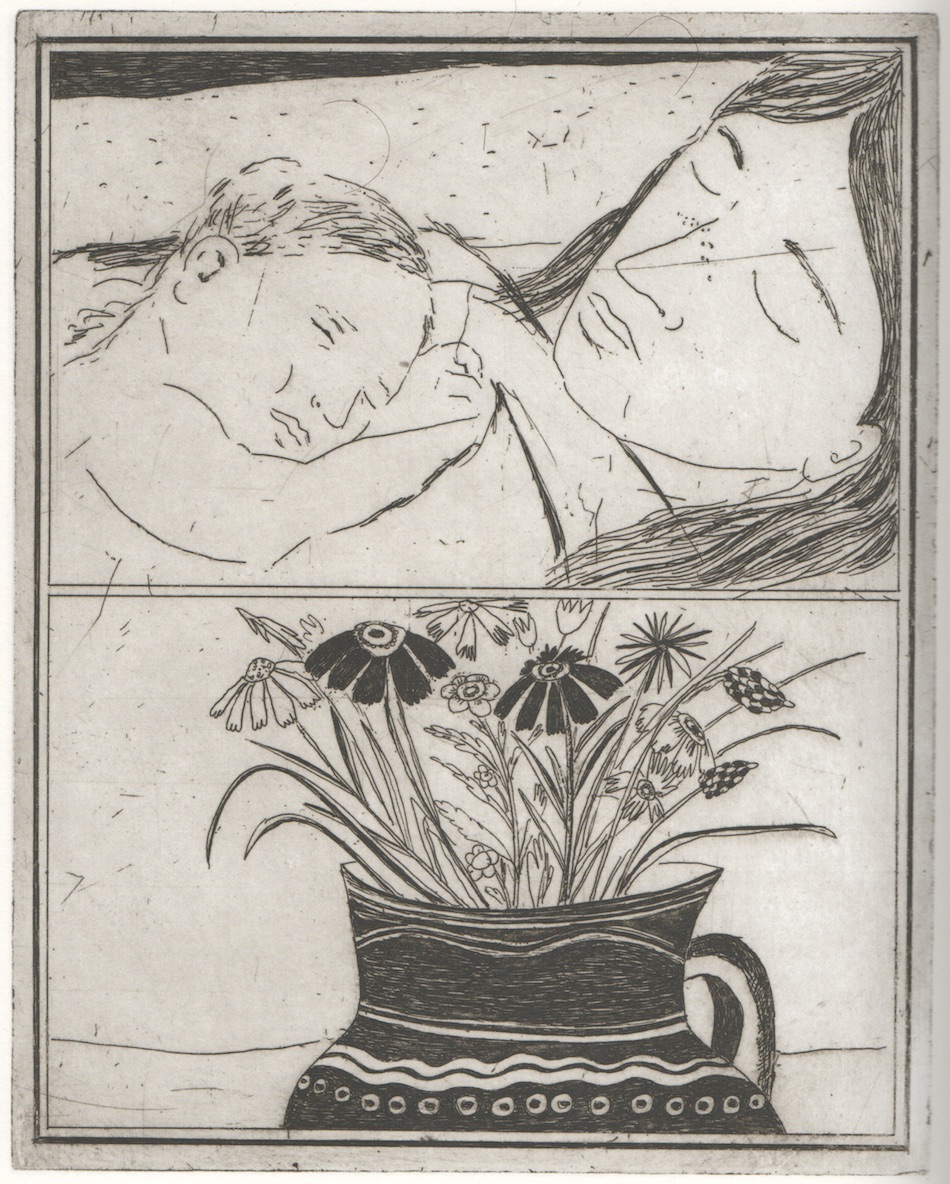 There’s also some seal-women swimming around, neither described nor alluded to in Poe’s original text, though selkies do appear in Norse mythology. There’s also a childishly stylized face in the image of the moon. That face, like that of the seal-woman or the factory workers, is pared down to a cartoonish degree, so its expression always reads as either neutral or perplexed. If the two-panel pages feel visually discontinuous, the book’s status as a comic reasserts itself due to the clear indebtedness to cartooning in the book’s visual language. Sometimes this stylization stems from the drawing’s unschooled appearance, a sense of the visuals being “off” whenever the detail increases beyond sheerest minimalism. The push and the pull between the different approaches becomes united by this sense of “oh that’s comics,” an organizing intentionality.

The Poe story is printed as an afterword, so the narrative can be decoded. (Within the book, it’s translated into Dutch, but for the English-language market, the original text is inserted alongside it on unbound pages.) Hudréaux’s previous book, It’s Not An Ocean, was more traditional in its formatting, with a drawing and a small amount of text, written by Geert Ooms, on every page. It’s reminiscent of Edward Gorey, or certain Lilli Carré works: the images don’t quite correspond to the text in the manner of an illustration, but the disconnect between the two constitutes its humor. The images there were etchings as well, but the figurework and facial expressions reminded me of the New Yorker cartoonist Edward Steed, with a similar sense of seething fury to the line. In Maelstrom, there’s a greater gap, spatially, between the images and the text, and the relationship between the two feels correspondingly more tortured as well. While paging through the book does not often feel like reading, when contextualized by the juxtaposition against Poe’s incredibly simple story, it doesn’t feel like a catalog of a gallery show either so much as a further evolution of a kind of cartoon book, giving images and text greater space to breathe their media’s unique air apart from one another. 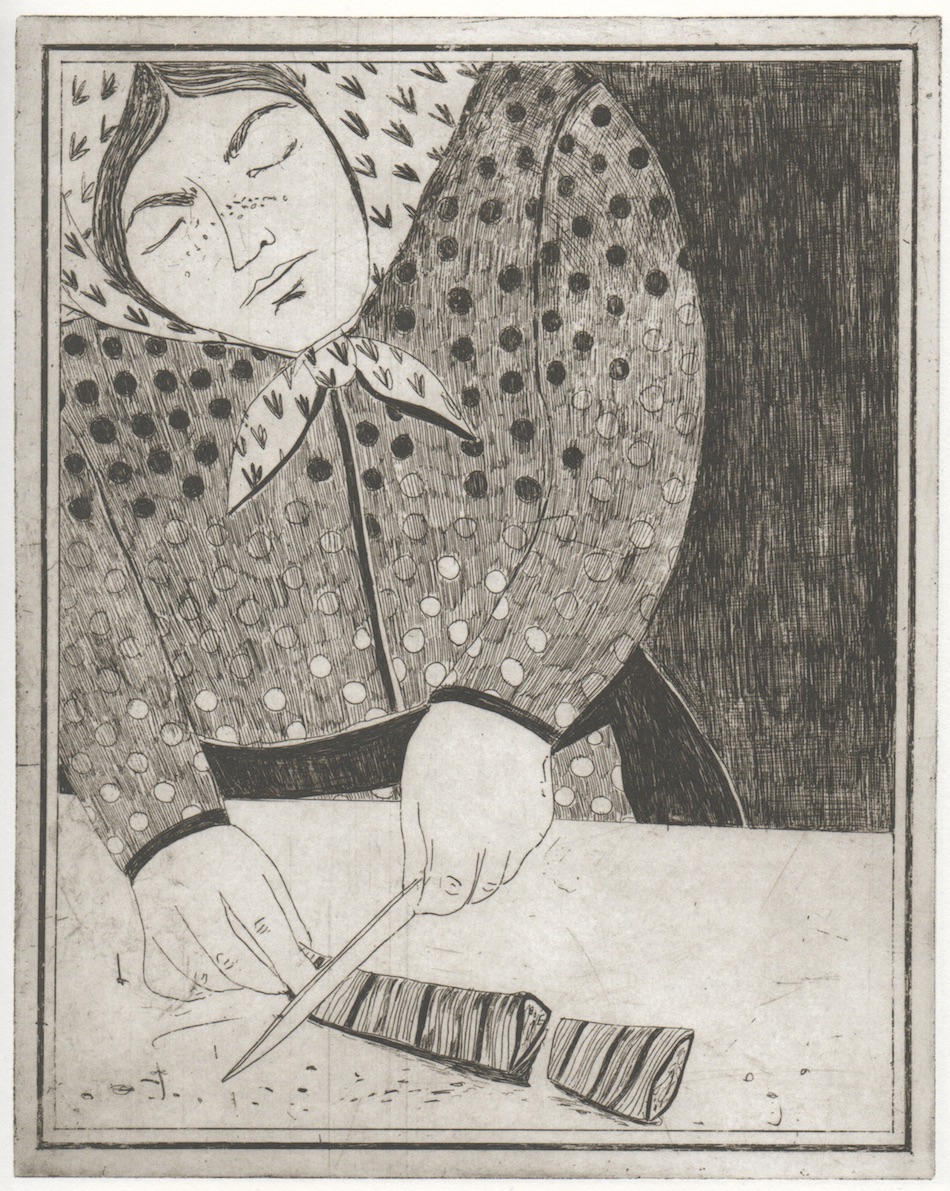 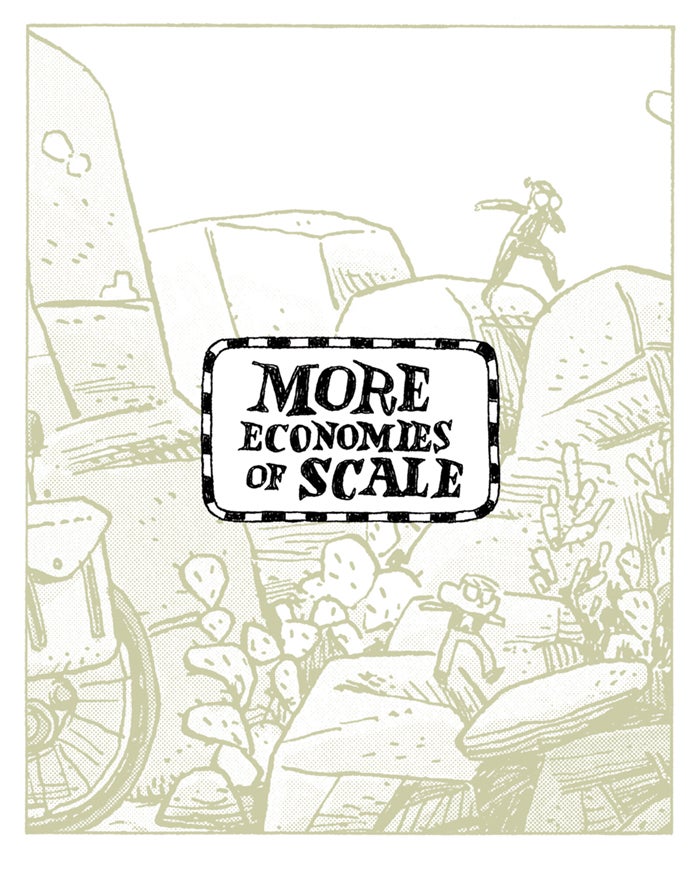